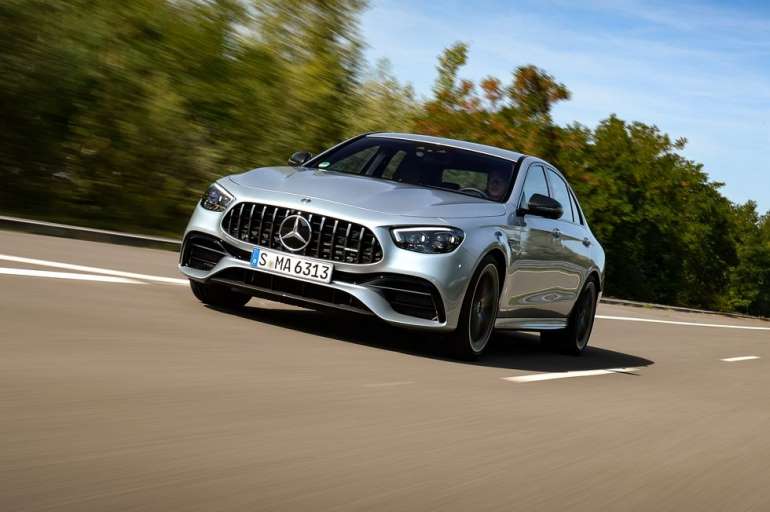 AMG's updated 603-hp E63 S is a multi-talented rocket that can play a limousine or a sports car all the way to its top speed.

The V-8-powered sports sedan is rapidly becoming an endangered species, making the arrival of the revised Mercedes-AMG E63 S a timely reminder that there won't be too many more examples of what is one of our favorite automotive genres. AMG has already admitted that its next-gen hybridized powertrain will be based on a four-cylinder engine, and even if that boasts an output to match (or surpass) the 603-hp twin-turbo V-8 in the E63 S, we can't imagine it will get close on character.

But before we call the mortuary, the E63 S remains a spectacularly talented all-rounder, with none of the E-class's midlife revisions having altered its ability to deliver huge, effortless speed. And it was happy to prove this in spectacular style in its most natural European environment—the passing lane of a German autobahn. As traffic cleared on the A13 near Dresden and the dawdlers happy to cruise at a mere 90 mph or so headed right, the AMG proved its ability to deliver seat-squashing g-forces and a heady V-8 soundtrack with a total lack of untoward drama. It felt as though acceleration barely diminished as the speedometer needle swept past 120 mph, where most fast cars begin to really struggle with the wind, and continues to pull strongly even beyond 155 mph, where lesser AMGs suffer the intervention of their electronic governor. We couldn't find a quiet enough stretch to confirm a top speed for the E63 S, but AMG says its more permissive limiter won't call time until 186 mph.

While such antics are fun, they only represent a small part of the E63 S's appeal. This remains a performance sedan as good at everyday speeds as it is at stratospheric velocities, handling the real world with very nearly the same level of refinement as its less powerful siblings, thanks to the transformative effect of its switchable dynamic modes. Comfort mode turns the E63 S into a limousine, with supple air springs and adaptive dampers doing an outstanding job of digesting road imperfections and the nine-speed automatic shifting early to make the most of every last drop of premium gasoline. The peak 627 pound-feet of torque is available between 2500 rpm and 4500 rpm. The gentlest mode is almost too civilized for something so potent, with AMG's engineers admitting they slightly softened the facelifted car's suspension in response to customer feedback.

If we were most buyers, we’d treat the firmer Sport mode as the everyday default, as it puts some pep into the E63 S's responses and some rasp into its exhaust note without adding undue harshness. Beyond that lies Sport Plus, which puts a noticeable edge on the damping, and the full-on Race mode, which turns the AMG into a snarling monster. Adaptive dampers, the switchable exhaust, and ESP modes can all be controlled separately, and there is still a Custom mode for the hard to please.

While the standard nine-speed shifts both cleanly and quickly, its continued use of a multiplate clutch pack instead of a torque converter—to help sharpen responses and enable high-rpm launches—does have a small impact on low-speed refinement, with the sense that engine and wheels are sometimes being connected with too much suddenness.

The E63 S controls its mass exceptionally well, feeling agile and wieldy for something its size and weight. Its curb weight is around 4600 pounds, but the accurate steering has good feel and delivers both arrow-straight high-speed stability and decisive cornering responses. Selecting the more aggressive dynamic modes brings a rearward bias to the torque distribution of the E63 S's standard all-wheel-drive system, but it takes the (likely rare) selection of the car's Drift mode to turn it into a tire-smoking rear-driven hooligan. While we obviously needed to sample this function in the interests of scientific discovery, we suspect that few buyers will use it often. "Aerodynamically optimized" 10-spoke, 20-inch wheels are standard, and the car we sampled also came with the optional carbon-ceramic brakes, an upgrade that provided predictably indefatigable stopping power.

The world might be losing interest in sedans, but—as with the lesser members of its clan—the E63 S has been given a facelift more substantive than the sort of gentle tinkering normally reserved for a midlife sharpening. A new front end features a vertically slatted radiator grille inspired by that of the original 300SL, with the oversize Mercedes star in the center now housing some of the sensors required for the lane-and-distance-keeping Drive Pilot smart cruise control.

As before, the cabin remains spacious, smart, and extremely well equipped, proving that leather and carbon fiber can play nice together. But as with its regular sisters, moving the E63 S onto the latest MBUX infotainment system has created additional complication and a fair amount of ergonomic confusion. Changing horses midstream (as it were) has required the E-class to effectively accommodate two different interface systems. So, the new car keeps the pre-facelift model's rotary dynamic mode selector on the center console, as well as exhaust, gearbox, damper, and stability switches. These functions, however, are all replicated by the two new rotary controllers (with neat integrated screens) mounted to the steering wheel.

The wheel itself features double spokes on each side, these seemingly required just to allow sufficient space for all the controls it now carries. Despite all of this—and the presence of a voice assistant summoned by saying, "Hey, Mercedes"—some common functions remain hidden within the myriad of submenus. This is a car that makes it considerably easier to change damper settings than to select a new radio station.

We're promised that the revised E63 S will be with United States dealers by the end of the year, with a $108,550 base price putting it between the regular BMW M5 and the M5 Competition. The AMG might not have quite the level of focus of its most obvious competitor, but it sounds superior and—thanks to its personality-changing dynamic modes—has a broader spread of talents. Cars such as these won't be available for much longer. We will miss them when they're gone.