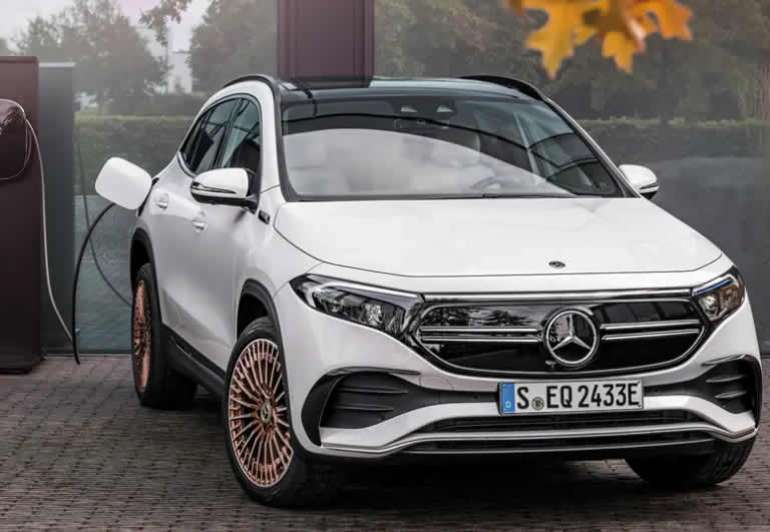 The latest new addition to Mercedes-Benz's growing line-up of electric cars is the EQA, the EV version of the existing GLA SUV. Although it looks like the aformentioned family car with a blanked-out nose, there's a lot of new technology under the skin, which will be shared with future models in the firm's EQ model range.

It's exactly the sort of product that the carmakers are telling us that buyers want right now – an electric SUV. And they're all rushing to build them for us, with the EQA's rivals including the upcoming BMW iX3, Ford Mustang Mach-E and Audi Q3 e-tron as well as the Volvo XC40 Recharge, which is already on sale in the UK. 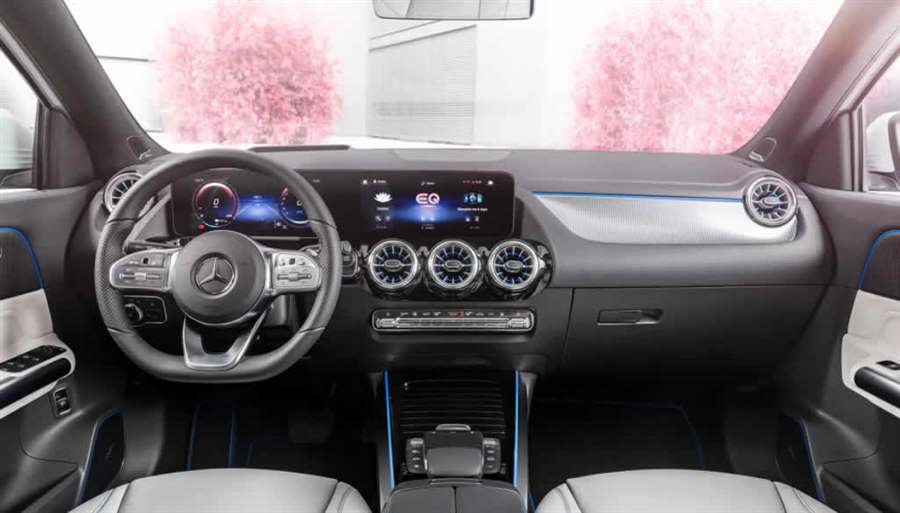 Design wise, it’s what you’ve come to expect from a small Mercedes-Benz SUV – smooth, creaseless design outside and an MBUX-equipped dashboard and infotainment system on the inside.

What's it like inside?
So it looks familiar inside, but there are some interesting touches, such as the instrument lighting which turns momentarily white when boost is active and the horizontally split performance meter which replaces the rev counter. There's also a fire red low-range warning scenario for the screen and the four driving modes are named Modern Classic, Sport, Progressive and Reduced.

The EQA can be had with the Energizing Comfort Plus package first launched in the CLS, which sounds like the answer to a question no one asked, but actually enhances comfort on long drives by offering massage functions, smartwatch connectivity, mood lighting, bespoke music and even a power nap feature you can use when parked up.

UK specs are yet to be confirmed, but trim levels in Europe include AMG Line, an Electric Art version with low-drag aerodynamic wheel covers and the launch Edition 1 featuring rose gold accents inside and out. 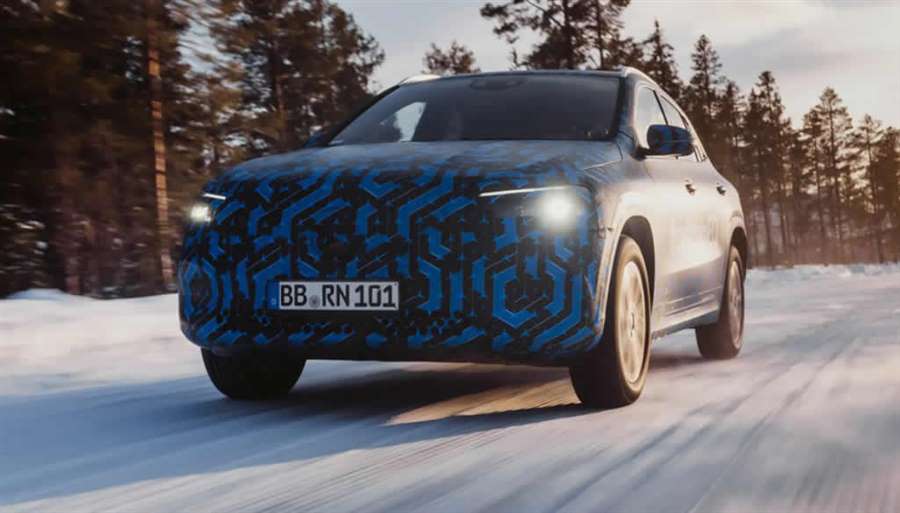 What's under the skin?
The good news is that there's some genuinely innovative technology under the skin and the claimed battery range and performance are impressive. A substantial lithium-ion battery pack is fixed into the floor, with the first model – EQA 250 – having a usable battery capacity of 66.5kWh. That lags behind the 78kWh you get in a Volvo XC40 Recharge, but is on the money for an EV of this size and class.

It's calibrated for range and efficiency rather than performance. The EQA 250 model claims up to 266 miles of range, according to WLTP figures, has a 0-62mph time of 8.9 seconds and a maximum speed of 99mph. You can charge it up to 11kW on AC at home, or up to 100kW on DC rapid charge.

There will be more EQAs to choose from, with Mercedes-Benz confirming that the EQA 250 model will be fjoined by power variants, including those with all-wheel drive. There will also be a 200kW (272hp) version later on (most likely badged EQA 300), and another variant that can claim up to 310 miles. 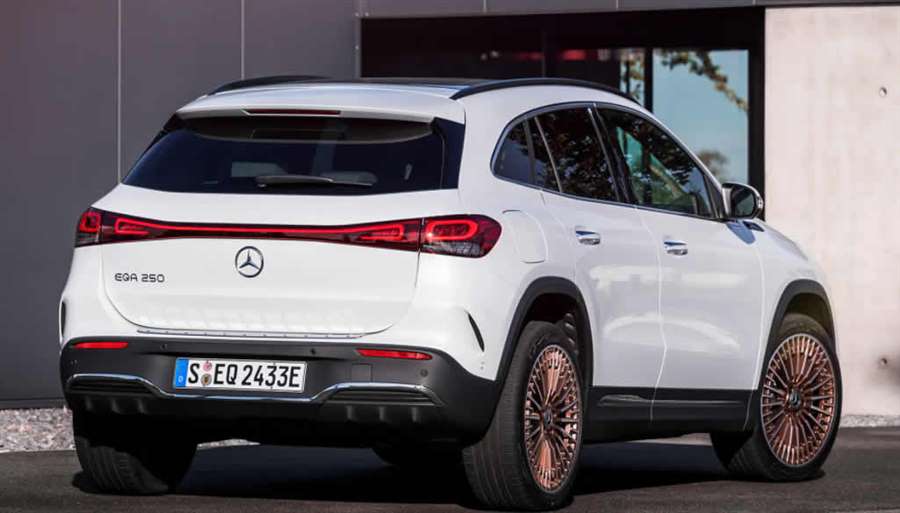 The EQA also gains the EQC's Eco Assist system, which uses navigation and traffic sign data to gauge how much brake regeneration is required at a given moment, and the navigation also takes into account charging times to give you as accurate a time as possible to get to your destination.

We've had a quick drive of a pre-production EQA in prototype form, and can confirm that it's an impressively refined place in which to spend time. The main audio source up to 20mph is the pedestrian warning chime which, later turns into a subdued hum. Only when driving really hard does that murmur swells to a discreet growl.

Despite the modest claimed acceleration figures, keen drivers will enjoy way the EQA can cover ground with surprising vigour. And like all EVs, this seamless acceleration is uninterrupted by gearchange upshifts. The almost noiseless flow means you have little sensation of speed, which might be worth noting if you're not someone who watches the speedo like a hawk. Overall, it’s a refined machine, complete with a comfortable and cosseting ride. 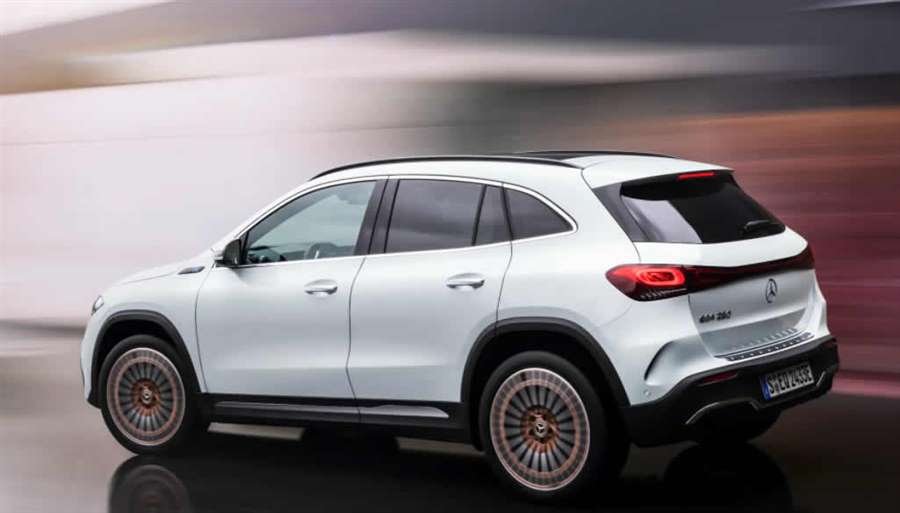 There are three recuperation modes (how much energy is recovered when lifting off the throttle) with different levels of energy regeneration labelled mild, medium and strong. Strong in particular feels like a viable one-pedal driving experience – lift-off and the car quickly loses momentum.

When will it go on sale in the UK?
Expect to see the EQA go on sale in the summer of 2021, with UK prices and specs yet to be confirmed. German prices start at €47,540, which suggest it'll be much more affordable than the XC40 Recharge and BMW iX3. There will be more related models to follow, with the EQB seven-seater SUV and EQS luxury saloon following later in 2021.