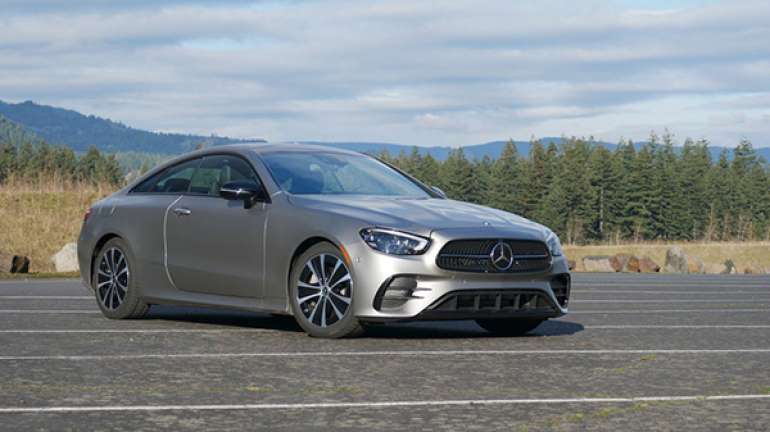 The schedule said a 2021 Mercedes-Benz E 450 was going to be showing up on Tuesday. The following week was therefore going to be a good one, at least automotively, with one of the finest sedans in creation gracing the driveway. Perhaps we’d take a nice family drive somewhere; take advantage of that big, comfy back seat.

Then the E arrived. It was missing doors. And B pillars. And that big, comfy back seat. This was in fact going to be a week spent with an E 450 Coupe. Admittedly, I had just assumed it would be a sedan and if I’m honest, I had pretty much forgotten the E-Class Coupe even existed. After all, two-door cars are increasingly an endangered species with scarce sales and a consequent meager selection of choices. To that point, the E 450 is the only car in its class. The coupes offered by BMW, Audi, Infiniti and Lexus are all smaller and cheaper, while there are a number of bigger and/or pricier choices. 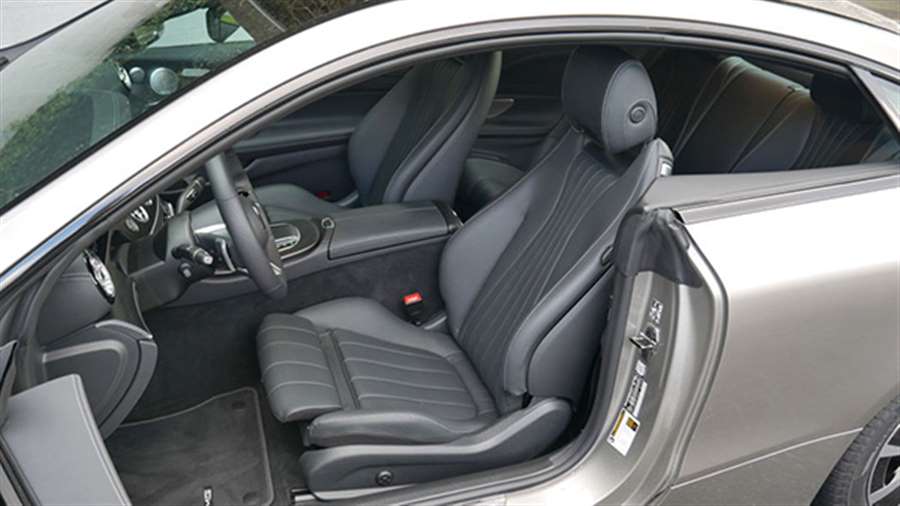 This scarcity is a tragedy. There’s an indelible romantic quality to coupes, especially ones as beautiful as this one, its curvaceous body slathered in silky Mojave Silver paint. They are indeed inherently less practical than a sedan or, ugh, a crossover coupe. They’re also inherently not a transportation appliance. By choosing a coupe, you’re far more likely to have drives that are more about the journey than the destination. Trips that are about the one or two people sitting up front, rather the kids or friends in back, and all the stuff you crammed into the trunk to enjoy away from the car at that destination. I can remember every coupe I took on a road trip: the Mercedes CL65 to the Grand Canyon, the Nissan GT-R to Vegas, the Challenger to Phoenix, the LC 500 to Bend, Oregon. All the sedans and SUVs everywhere else? They’re just a blur.

In a way, though, choosing a coupe is also the practical acknowledgment that back seats are often rarely used and trunks rarely filled. You can file a crossover coupe’s all-wheel drive and extra ground clearance into that folder as well. If you already have a practical car at home, why not indulge in a little automotive romanticism? When did we all get so sensible and boring? 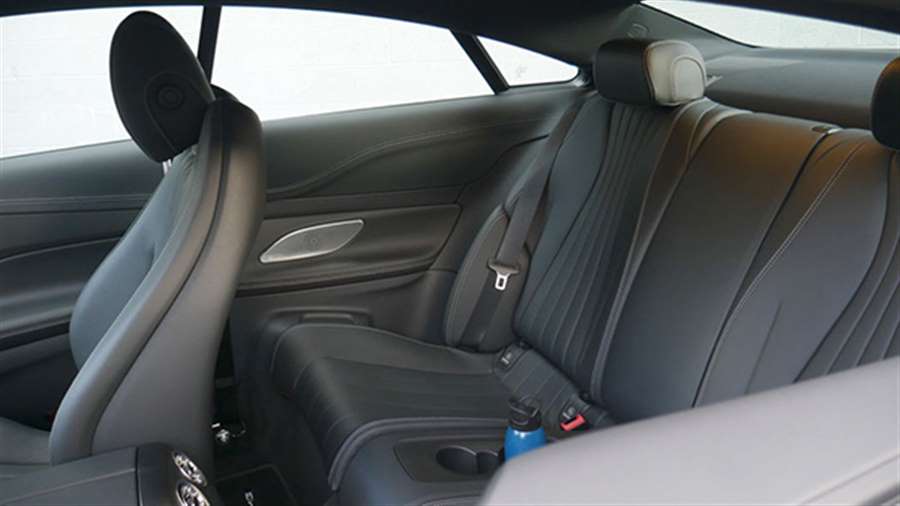 Probably around the time that traffic became unbearable everywhere and the vast majority of driving a chore. Why have a romantic car when so many people see nothing romantic in driving? We are not those people, though; certainly not if you find yourself routinely reading Autoblog. While much digital ink has been spilt in the crusade to #SaveTheManuals, some should be held in reserve to protect coupes from going extinct. Just as much would be lost.

Although the E 450 Coupe shares its interior design with its sedan and wagon siblings, the grand, opulent nature of it seems far more fitting in this most romantic of variations. The broad swath of open-pore wood seems to lap across the dash likes waves and cascades down the center console. The four rotary air vents stare out like the engines of a 747, their inner workings aglow in multi-color ambient lighting that complements the color glowing from behind the trim below. There are the grand, futuristic MBUX displays, the intricate Burmester speaker grilles and the novel, twin-spoke AMG steering wheel. This E-Class Coupe may not have been graced with one of the striking two-tone color combinations, but even in all-black, this cabin stands to make every drive that much more of an event, which, to belabor the point, is a coupe’s raison d’etre. 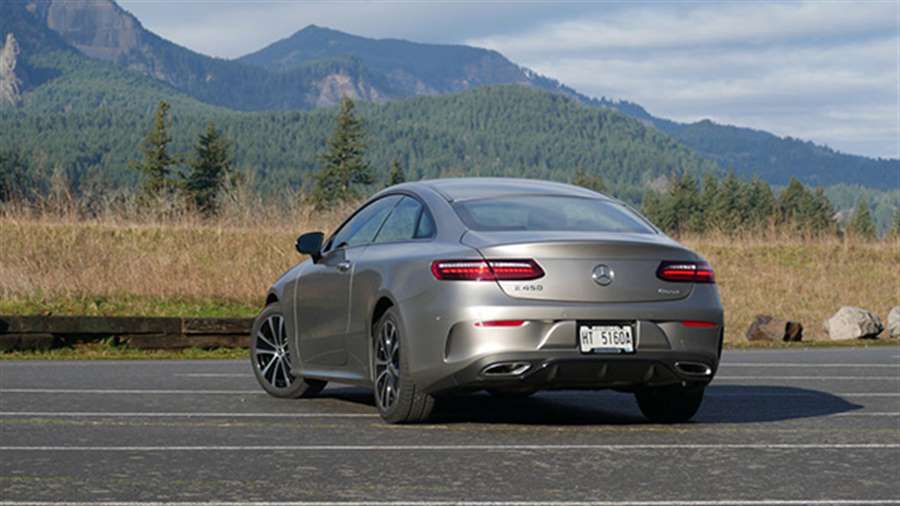 To that end, actually driving the E 450 is as special as one would hope. In true grand touring tradition, it can cosset you comfortably for countless miles with a ride that’s far cushier than anything you’ll find in a sports coupe (a BMW M4, for example). True, our test car benefited from ample sidewall courtesy of 18-inch wheels, significantly reducing the chances of harsh reactions to gnarled pavement. Yet in its pocket was also the optional Air Body Control air suspension, a cool $1,900 that’s very well spent. In addition to providing the aforementioned plush ride one might expect from something dubbed an “air suspension,” its ability to firm up the damping and lower the ride height also improves handling. While most cars today have some sort of drive modes that alter various components and controls to create a more relaxed, comfortable or engaging driving experience, the E 450’s goes a bit further by actually transforming the car’s character.

With the suspension considerably firmer, the steering tauter, the transmission staying in lower gears and the throttle more responsive to delicate inputs, you might as well be in a different car. That’s neat, because the car you were previously in was pretty great. So is this one, but in a different way. In Sport+, or to a lesser extent Sport, it suddenly feels smaller and more agile, as if shrink-wrapped around you. At the same time, the suspension never becomes intolerably firm, nor the powertrain overcaffeinated. It doesn’t try to be a sports coupe and is better for it. 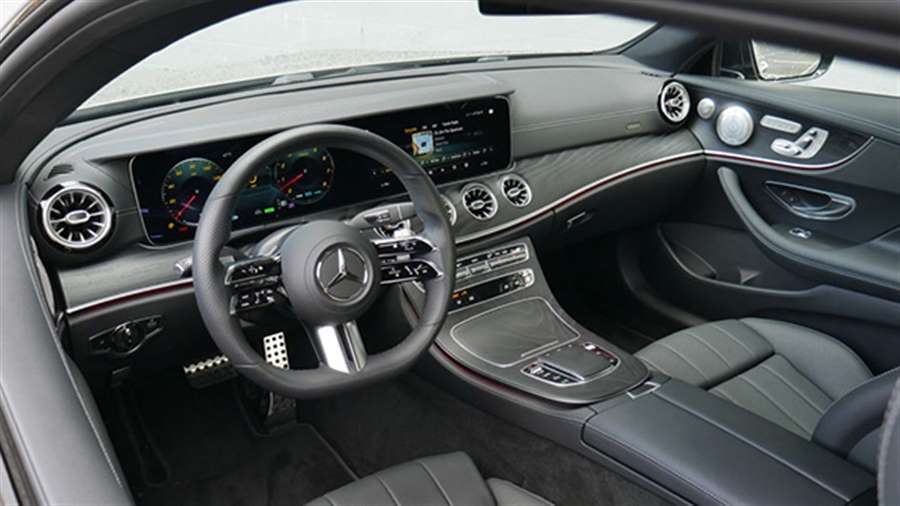 Under hood, the E 450 has Mercedes’ innovative new turbocharged 3.0-liter inline-six with EQ Boost mild-hybrid system. It’s good for 362 horsepower and 369 pound-feet of torque, and when paired with 4Matic all-wheel drive as this was, dispatches 0-60 mph in 4.9 seconds. True to the car’s character, this is a rather undramatic powertrain. There are no histrionic AMG exhaust noises, and if Mercedes pipes in anything fake through the sound system, it’s certainly not noticeable. It’s incredibly smooth and effortless in its power delivery, which probably shouldn’t be surprising for an inline-six amplified by a turbocharger and an electric motor. If there is a dynamic complaint, it’s that the nine-speed transmission’s Sport+ mode isn’t quite as eager to downshift when braking as in AMG applications.

One also has to acknowledge that by going with a traditional hardtop coupe design and dispensing with the B pillar, you can detect a slight loss in structural rigidity, especially over bumps. There’s no flex or creaking or anything overt, but there are also no free lunches. At least the resulting meal of freer-flowing air and the classic coolness of a hardtop is forever tasty. Pity about that little vestigial window bit at the rear. 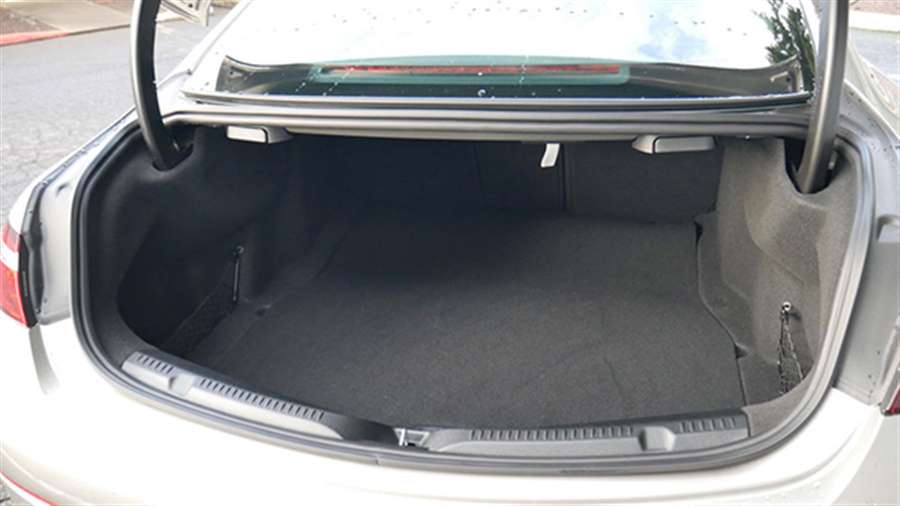 Losing the B pillar also makes it far easier to climb into the back seat, but this is still a coupe. It’s obviously a lot less practical than a four-door car. At least it’s a big coupe. The trunk measures a perfectly usable 10 cubic feet, and the back seat offers sufficient legroom for average-sized adults. Headroom is surprisingly good too, although taller folks may find the car’s rather aggressive tumblehome making contact with the side of their head. Weird.

Really, the E 450’s biggest drawback is one common with every newer Mercedes: the MBUX interface is convoluted and frustrating. Sure, it looks pretty, but it’s laborious to switch between menus; too many icons are small and the same color as the background; and although it utilizes a touchscreen, the unit is so far away, I end up wanting to use the touchpad that falls readily at hand. Except touchpads are a terrible way to control things in a car. See Lexus, Remote Touch.

Yet much like that infernal bit of tech in the otherwise exquisite Lexus LC 500, my dislike of MBUX doesn’t come close to ruining the Mercedes-Benz E 450 Coupe. It may represent a segment of one, but it’s hard to imagine any brand possibly topping this masterful and appropriately romantic effort. It’s a special car and it made for memorable drives, even if here in early 2021, there was nowhere to really go. I suppose that makes a car like this even more important – your drives have to be about the journey since the destination is inevitably bound to be something no more exotic than Target or the drive-thru.

Tagged under
More in this category: « Starting in 2024, Full Mercedes-Benz Lineup Will Have Autonomous Capabili Mercedes-Benz EQE Will Be Smaller Than The E-Class »