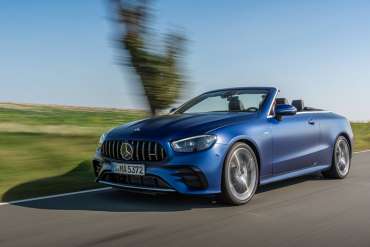 A freshened face and additional features adorn AMG's updated droptop E-class, but its high-tech inline-six remains as sweet as ever.

The hierarchical nature of model positioning means it is easy to view the 2021 Mercedes-AMG E53 as less desirable than the AMG 63 S sitting above it in the E-class range. Yet, such a judgement is unfair. The considerable talents of AMG's gently electrified six-cylinder give it a different character than the range-topping V-8 but one that's almost as equally compelling. In those variants where both powerplants are offered, it is entirely justified to prefer the smaller engine on grounds other than sheer parsimony. With the stylish E-class cabriolet, however, the point is moot. The AMG E53 is where the convertible tops out.

Some will bemoan AMG's continued refusal to combine the sonorous muscularity of its twin-turbo 4.0-liter V-8 with the cabriolet body. But the electrically assisted 3.0-liter inline-six of the AMG E53 proves almost perfectly suited to the car's laid-back driving manners. A mid-term facelift for 2021 hasn't wrought any significant mechanical revisions—power and torque figures remain unchanged—but it has brought more toys and revised styling to the range-topping cabriolet. 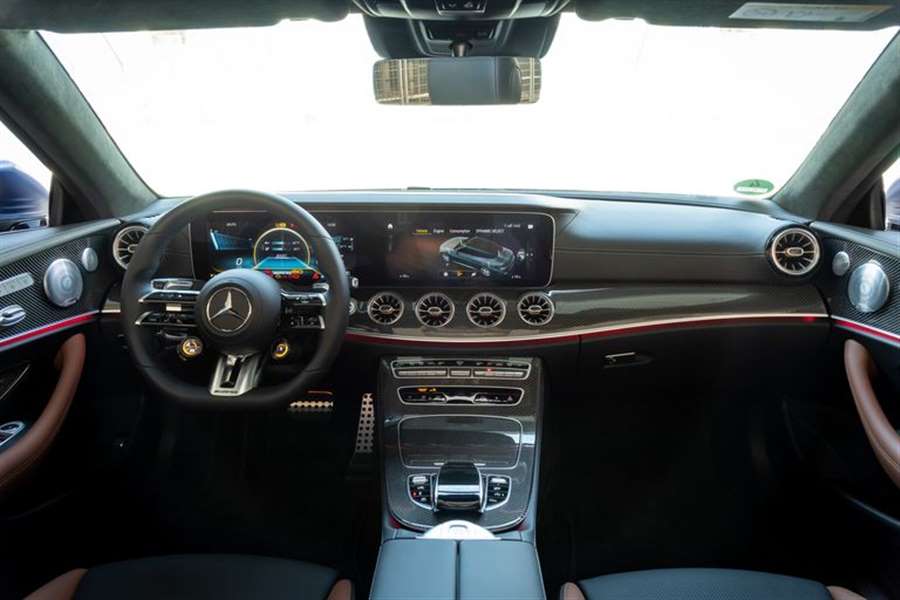 As with the E-class sedan and wagon, the cabriolet and closely related coupe get a heavily revised front end with new headlights and a radiator grille apparently inspired by the W194 300SL racer that won the Carrera Panamericana in 1952. Narrowed at the top and wider at the bottom, this is effectively an inverse of the pre-facelift grille and one that we think better suits the car. Changes at the rear end have been more limited, the E-class cabriolet (and its coupe counterpart) getting taillights with new internal elements. As before, the AMG E53 gets quad exhaust pipes beneath the rear bumper. The lesser E450 makes do with slightly squashed-looking dual exhaust tips.

More obvious changes are evident in the cabin, which remains spacious and extremely well-finished but which has migrated to the latest version of Mercedes's MBUX infotainment system. This is certainly crisper looking than the old setup and adds high-tech features like augmented-reality navigation, which superimposes direction-pointing arrows onto a live video feed when approaching intersections, but we found the system lacking in intuitive smarts and sometimes complicated to operate. Mercedes also gave the E53 a new four-spoke steering wheel to provide real estate for a proliferation of touch-sensitive controls, many of which replicate functions still served by surviving pre-facelift buttons. Buyers will doubtless get used to the complexity—or shortcut it with the smart "Hey, Mercedes" voice assistant—but we are increasingly nostalgic for the recent past when Benz's user interface was both simple and intuitive. 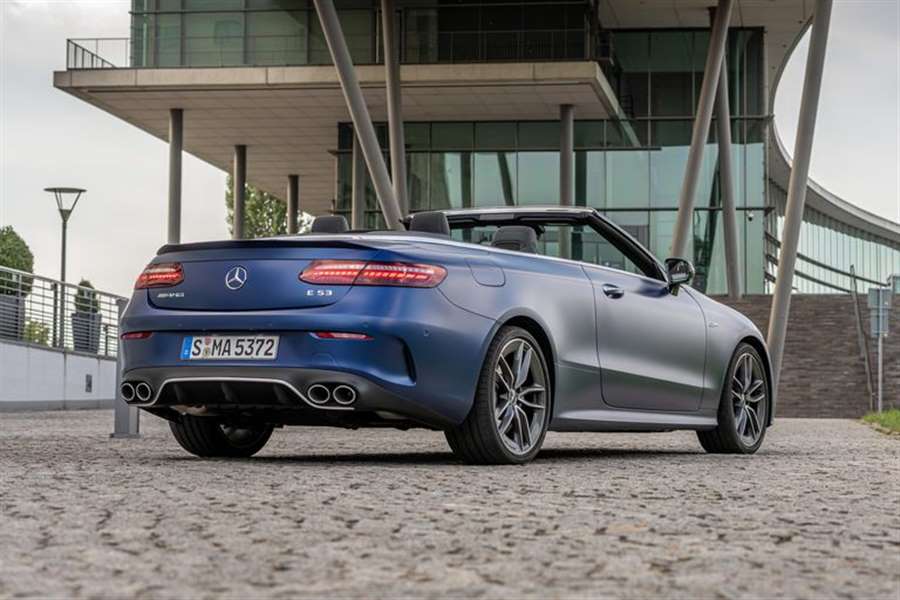 Beyond mild ergonomic niggles, the rest of the driving experience impresses all the way. The E53 powertrain continues to use a very clever 3.0-liter inline-six that has both a conventional exhaust-driven turbocharger and an electrically powered 48-volt compressor that adds boost at lower engine revs. The six is paired with a substantial integrated starter-generator that, although it can't power the car by itself, is able to add up to 21 horsepower and 184 pound-feet of torque to the combustion engine's output of 429 horsepower and 384 pound-feet. (The lesser E450 uses the same engine and starter-generator but lacks the e-turbo.)

The powertrain's complexity remains effectively invisible. All the E53 driver will experience is the combination of effortless low-rev muscle—with a total absence of detectable lag—and an impressively bristly top end. No, the six-cylinder can't match either the firepower or theatrics of the E63 S, but it is still able to deliver forceful acceleration when unleashed. The last E53 coupe that we tested blasted its way from zero to 60 mph in just 4.1 seconds, and we expect about the same for the slightly heavier cabriolet. Only at high speeds does the E53 start to feel anything less than blisteringly quick. On a stretch of limit-free German autobahn on our test route, the rate of acceleration fell away above an indicated 125 mph, a speed at which the E63 S sedan kept pulling at a barely diminished rate. While obviously lacking a V-8 soundtrack, the E53 makes some impressively muscular noises under hard use, with the Sport and Sport Plus modes allowing for some pops and crackles on upshifts and when the accelerator is lifted at higher revs.

The punchier dynamic modes sharpen the rest of the E53 driving experience, too, although not one turns it into a true sports car. Air springs and adaptive dampers are firmed up in the more aggressive settings but not sufficiently to corrupt the cabriolet's ride. Nor does the body control feel wayward in Comfort mode, the cabrio's 4600-pound mass kept in check over the roughest surfaces we could find. The weight is more obvious when asking the car to change direction quickly, and with the cabriolet's roof stowed we did notice slight evidence of the car's weakened structure, the rearview mirror vibrating slightly over certain road surfaces. The cabriolet's steering delivers crisp cornering response, although little natural feel passes beyond the generous power assistance. Traction from the quick-acting 4Matic all-wheel-drive system is impeccable on dry pavement. It takes an unsympathetic level of abuse to persuade the E53 to relinquish any rear-end grip. 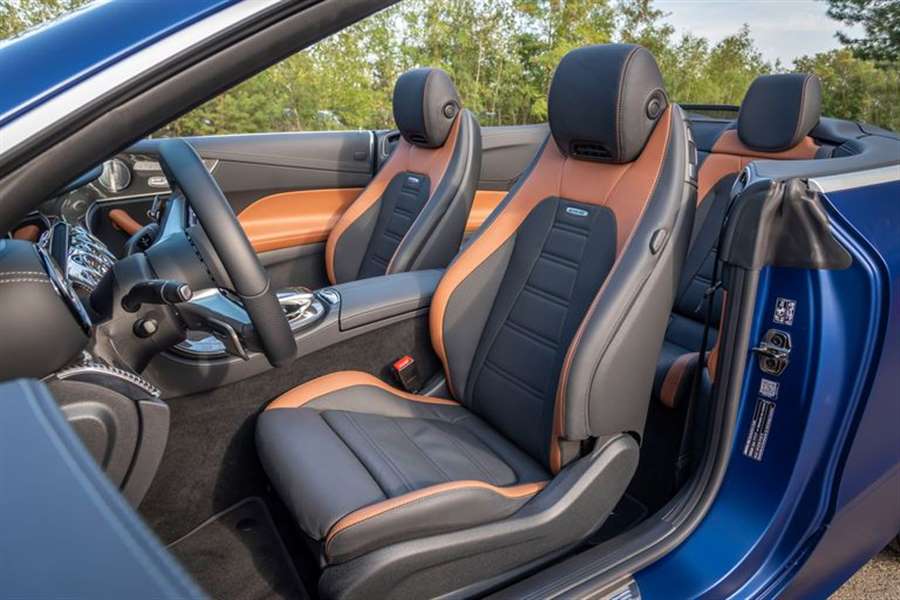 The E53's hybrid powerplant remains almost perfectly suited to the cabriolet's dynamic demeanor—rapid but relaxed, adding character without dominating the experience. Even cruising at speed with the roof folded, the E-class cabrio's cabin is impressively free of drafts or buffeting. The Airscarf system directs hot air to the top of the seats, making it possible to enjoy top-down driving in conditions that would be too chilly for most convertibles. The nine-speed automatic gearbox is also smoother at lower speeds than on V-8-powered models, where AMG replaces the torque converter with a wet-clutch pack.

Luxurious cabriolets have been part of Mercedes's offerings in the United States for as long as the brand has been selling cars here, but that might not be the case for much longer. We know that the future of all the brand's cabrios (and conventional coupes) are under review in the face of sliding sales. Losing a car like this would be a huge shame. The E53 continues to feel like a high point for both its brand and its wider genre.

Published in Mercedes
Tagged under