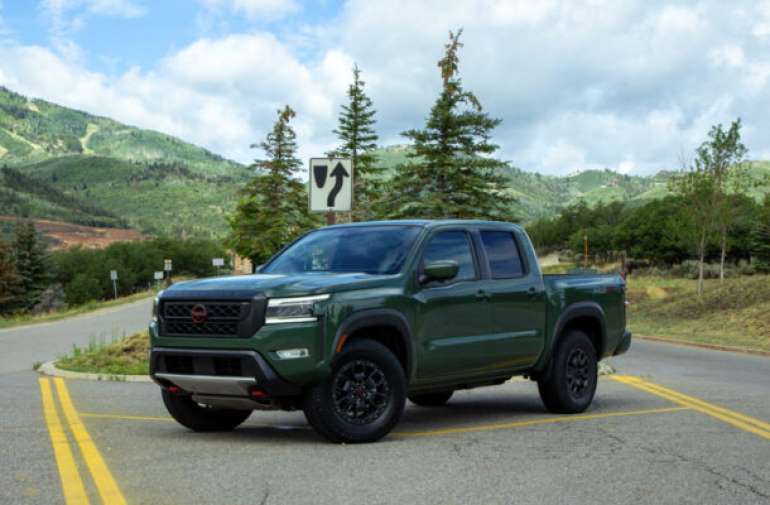 The Nissan Frontier pickup truck has been redesigned for 2022. It’s more modern, with good technology in the cabin and a ride quality to meet the standards of today. In addition to a new cabin and suspension, the chassis has been revised and the exterior styling gets a full makeover.

The Frontier remains mid-sized with the same wheelbase of 126 inches and the same 5-foot bed on the crew cab, and longer wheelbase with 6-foot bed on the extended cab. But the overall length of both versions has been increased by 4.5 inches, all at the grille and front bumper.

The new Frontier is still brawny, if less distinctive because so many trucks since then have gone for a similar look. The 2022 Frontier has bulging fenders and a long sculpted hood that protects its 3.8-liter V-6. It produces 310 horsepower and 281 pound-feet of torque, mated to a 9-speed automatic transmission.

The drivetrain powers the rear wheels in standard configuration, while part-time 4WD with hill descent control is available. It’s a solid powertrain, the engine smooth and transmission responsive. It can tow 6,720 pounds–that’s the two-wheel-drive extended cab which comes standard with a trailer sway control, a system that automatically dabs the brakes if it feels anything starting to wander.

The new Frontier also handles better, with less body roll thanks to a bigger stabilizer bar in front and revised bar in the rear.

The Pro-4X model, for serious off-road use, comes with Bilstein dampers, skid plates to protect the bottom of the engine, transfer case, and fuel tank, plus a Dana rear axle and electronic locking rear differential, There’s also a Pro-X without 4WD, with just the Bilsteins but all the looks, including 32-inch Hankook all-terrain tires mounted on 17-inch alloy wheels.

The cabin catches up in technology, with an 8.0-inch touchscreen with Apple CarPlay/Android Auto, a 7.0-inch info display, and four USB ports.

It hasn’t been crash tested yet, and automatic emergency braking is not standard. Blind-spot monitors, automatic high beams, and a surround-view camera system can be ordered.

Made in Mississippi, the Frontier comes in S, SV and Pro-X models, with RWD or 4WD, and as an extended cab or crew cab.

The Frontier has been more than redesigned, it’s been transformed into an angular and boxy-ish truck that’s the style today. The word Frontier appears large on the tailgate, which for 2022 is damped so it can’t slam down, or up.

The bulging and boxy fenders suggest a boxer’s shoulders and biceps. The details of the Pro-X make it look even tougher, with a highly visible skid plate in front, red tow hooks that stick out of the fascia, vertical intakes for cooling air, black alloy wheels, and LED daytime running lights.

The Frontier’s redesigned interior is much better than that in the previous truck. Make no mistake, it’s rugged like the exterior but more tranquil, with better materials and sound deadening. On the freeway, the cabin is almost silent.

A large touchscreen and intelligently located controls give the cabin a better attitude for hard work. It’s outfitted with lots of storage, and after a full day’s drive, the front seats proved their worth with good support.

The back seat’s better used for tools and equipment in extended-cab form. Its rear seat is a tiny bench. In the crew cab, back-seat passengers get more space to stretch out.

For a truck, the Frontier is reasonably rapid, with more than enough power for passing, with 310 horsepower and 281 pound-feet of torque from its 3.8-liter V-6. It uses a 9-speed automatic whose first three gears have low ratios that quicken the acceleration from a standing start and at low speeds. Cruising in higher gears, it responds reasonably quickly when the driver asks for more acceleration, without the hesitation we’ve experienced with rival 9-speeds.

But it’s the ride where the Frontier excels. Its frame has been reinforced and its suspension has been retuned to improve stability. The new Frontier is so composed we might say it’s uncanny, at least compared to the old one.

The steering is quicker than the old truck, too, and that’s especially felt around town.
The Pro-4X, with Bilstein shocks, is more capable over rocky ground than the previous version.

The 2022 Nissan Frontier has been completely redesigned, and it’s now one of the leading mid-size trucks. It’s a solid all-around performer, with the latest in technology available or standard across the board. Make it an SV—and make it a crew cab for the best value and utility.