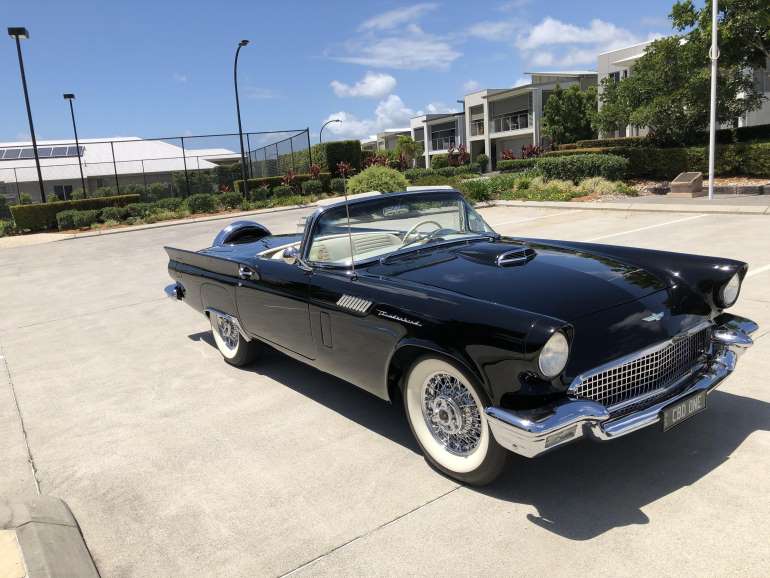 A true classic by any standards. The original T-Bird was a response to Chevy's Corvette, and oozes '50s diners and drive-ins style from every angle.

Ford Thunderbird dominated on the American market within a few decades. To the casual observer, the Thunderbird is an icon: a sports car with a 50-year history that’s the rolling embodiment of nostalgia. But like most legends, the true story is a lot more complicated.

Interesting fact is that T-Bird isn’t even really a sports car.

How is born Thunderbird?

Henry Ford II was falling hard for European sports cars. In 1952, Enzo Ferrari had gifted him a Ferrari 212 Barchetta, and at that year’s Paris Motor Show, he took designer George Walker to task for not having something similar in the works. After the show, Walker called his team in Detroit, and told them to have a presentation ready when the men returned from Paris.

The sports car project was quickly given the green light by Ford, and took on a new sense of urgency in January 1953, when Chevrolet released the Corvette. But Chevy’s sports car was heavy and underpowered, laden with quality control issues (fiberglass construction was still in its infancy), and saddled with a wheezy inline-six and two-speed automatic transmission. This gave Ford an invaluable chance to learn from Chevy’s mistakes. As the Corvette struggled, the company learned what customers wanted — and most importantly, what they didn’t.

Ford’s car would be steel-bodied. It would be a two-seater, but would be roomier and more refined than the Corvette. It would ride on its own unique chassis, but would share much of its trim work and interior with other Ford products. And most importantly, it would have the company’s new Y-Block V8 and available manual transmission, two things Chevy didn’t offer. Nearly a year after the Corvette made its debut, the Thunderbird bowed at the Detroit Auto Show to rave reviews.

There was a basic problem: It wasn’t a sports car. The Thunderbird was too plush, too heavy, and too sluggish to compete with the likes of MG, Triumph, Porsche, or Jaguar. Unlike Chevy, which shot itself in the foot by billing the Corvette as a sports car, Ford marketed the Thunderbird as a “personal car” instead, appealing not to weekend racers, but to well-to-do buyers who wanted something fun to drive without sacrificing comfort. Purists who expected a world-beater were disappointed. The American public, however, was not.

Ford had only planned to build 10,000 T-Birds for the 1955 model year. Within the first 10 days after its debut in Detroit, it had over 3,500 orders. It would end up selling over 16,000 before the year was out. And that was no small task; at over $4,000 fully-loaded, the Thunderbird could be twice as expensive as a base-model Ford coupe, and as much as the far more capable Jaguar XK140.

Thunderbird sales were a huge success for Ford. Available with either a 292 or 312 cubic inch V8, the T-Bird could be had with a manual or automatic transmission, power seats, a removable hardtop, and a telescoping steering wheel — all luxury amenities that customers loved. Another 15,600 cars sold for 1956. In 1957, the number jumped even higher to 21,300.

The second-generation “Square Bird” would find nearly 200,000 buyers over the next three years.