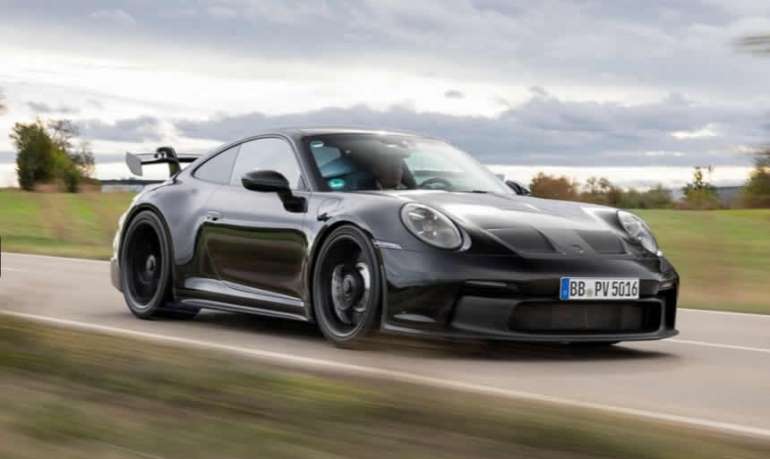 Up close and personal with one of the year’s most anticipated driver’s cars.

There's the merest hint of a twitch, caught instantly with the tiniest flick of the wrists. Andy Preuninger keeps his foot down. The corner opens onto a short straight running between trees with hints of the red and gold and brown of autumn among the green. The tach needle swings past 8,000 rpm, a steely manic snarl behind us as Preuninger reaches for the shifter on the center console and plucks the next gear. "A Porsche 911 GT3 is like a human being," he says, watching like a hawk for damp patches on the tarmac. "It likes warmth. It likes operating in the same temperatures we do, 15 to 25 degrees centigrade. When the dampers and the tires are cold it communicates that it's not happy." 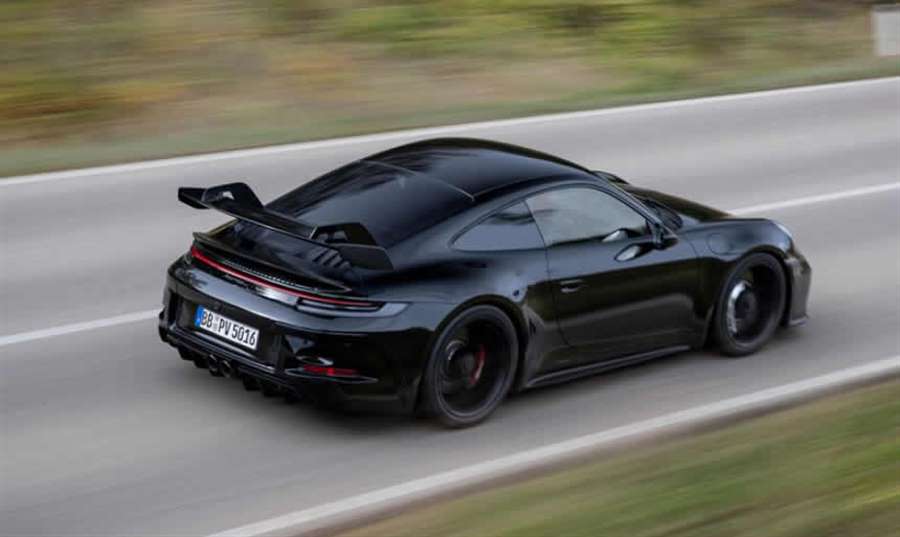 Andreas Preuninger's anthropomorphism is not misplaced: As head of the department that engineers and develops Porsche's high-performance GT models, the 2022 Porsche 911 GT3 is, like every GT3 since the 996.2 model, very much his baby. And from where I'm sitting, in the passenger seat of a lightly camouflaged prototype that Preuninger says is basically 99 percent the production car, it feels a preternaturally talented one.

There's been a lot of anxious speculation about this new 911 GT3. Would the bigger, wider 992 platform degrade the stunning poise and precision, the breathtakingly athletic agility that were the hallmarks of the 991.2 GT3? Would the engine have the same crackle and snarl and instantaneous throttle response? Could it be as pure and as exhilarating a sports car? Preuninger gets it: "The challenge is when you have a car that is as good as the 991.2 GT3, how do you make it better?"

First, keep what works. The 992-series GT3 retains the charismatic naturally aspirated 4.0-liter engine from the previous car. Preuninger won't go into precise details, but there have been tweaks to both the intake and exhaust, and the engine management system has been remapped. Power is up, but not by as much as you might expect: It's basically an iteration of the 2019 911 Speedster engine, which pumped out 502 hp and 346 lb-ft of torque. And yes, it revs to 9,000 rpm. 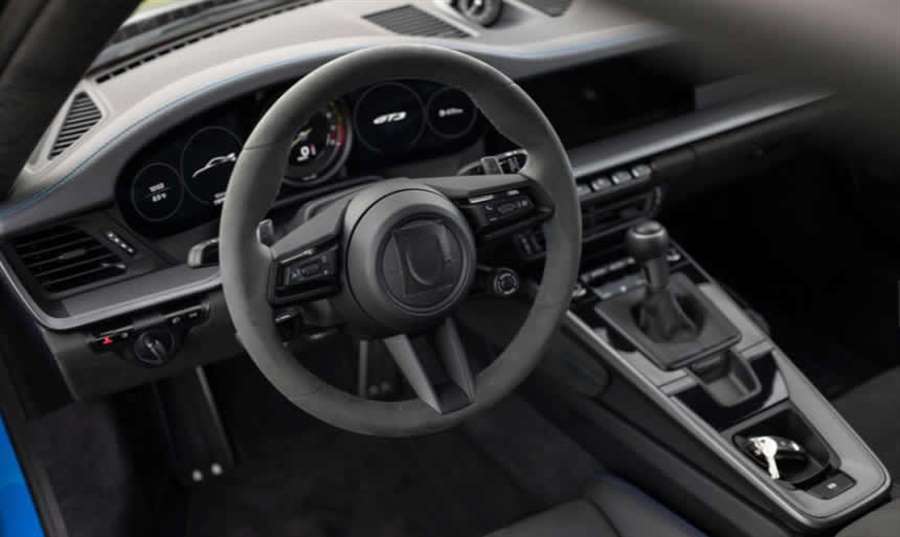 As before, the 2022 911 GT3 will be available with the choice of either a conventional six-speed manual or the PDK seven-speed twin-clutch automatic transmission fitted to our prototype. Both transmissions are carried over from the 991-series GT3, though the PDK gets slightly bigger bearings and a better oiling system, plus a different control module to enable it to work with the 992's new electronic architecture. The manual transmission's ratios are unchanged, but the final drive ratio has been lowered to account for the 992's 21-inch rear wheels.

Keep what works, then think about what can be improved. The 992 platform means the new GT3 has a wider track front and rear. The rear axle is basically upgraded 992-spec hardware, with the rear-wheel steering system as standard. Up front, however, is an all-new multi-link suspension, the first ever on a 911 road car. Derived from the 911 RSR racecar front axle, it's unique to the new GT3, though it's logical to expect the hardware will also appear under the forthcoming 992-series 911 GT2. It's the biggest single engineering change over the old GT3, says Preuninger, and it drove a lot of the chassis development work.

What's noticeable, as we hammer along some of the surprisingly rough and ready roads near Porsche's Weissach engineering center, is not just how crisp, how responsive, how alert this new GT3 feels, even from the passenger seat, but also how well it rides on its Michelin Pilot Sport Cup 2 R tires. The 911 GT3 is not soft—you feel exactly what's happening underneath—but it's not harsh and jittery, even at modest velocities. Preuninger nods when I comment. "Some people confuse stiffness with sportiness," he says. "A wheel needs freedom to travel. Some performance cars are so stiff they feel dead at low speed." This GT3 feels very much alive. 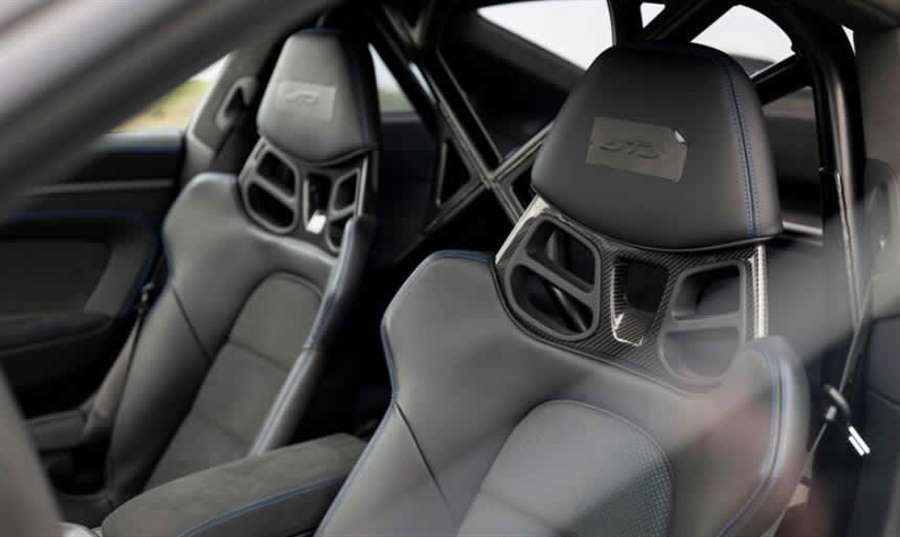 A look around the undisguised interior of the new GT3 reveals it to be, apart from the obvious GT-spec hardware such sports seats and a half roll-cage, basically 992, with one notable—and welcome—difference. The small, soulless toggle switch used to select drive or reverse in PDK-equipped 992s has been replaced by a shifter that looks almost identical to the manual one. "You have to check that it has three pedals, to make sure," grins Preuninger, who prefers using a shifter on the center console to paddles on the steering wheel, even in PDK-equipped GT3s and GT2s.

Front and center in the new instrument panel is an analogue tach that reads to 10,000 rpm, flanked by screens either side that can show all the information you get in a regular 911. There's a special GT configuration that pares back that info to the minimum a race driver wants: Tire pressures and water temp on the left hand side and oil temperature, oil pressure and fuel level on right hand side. And curving around lower rim of tach are shift lights that appear in Sport manual mode comprising thin yellow graduations that build in height then flash blue at the upshift point.

The scanty exterior disguise doesn't hide much, but it doesn't reveal all the new GT3's secrets, either. A quick look around reveals the front fenders, doors, roof and rear quarter panels are shared with regular 911s. A new front bumper features a large central air intake and slim air-curtain vents on either side that direct air through the front wheel well. The front hood is carbon fiber, and features vents at the leading edge to bleed hot air from the radiators. In previous 911 GT3s hot air was vented through slots at the top of the bumper, but the 992's more complex frontal structure meant there was no room for that solution on the new car. 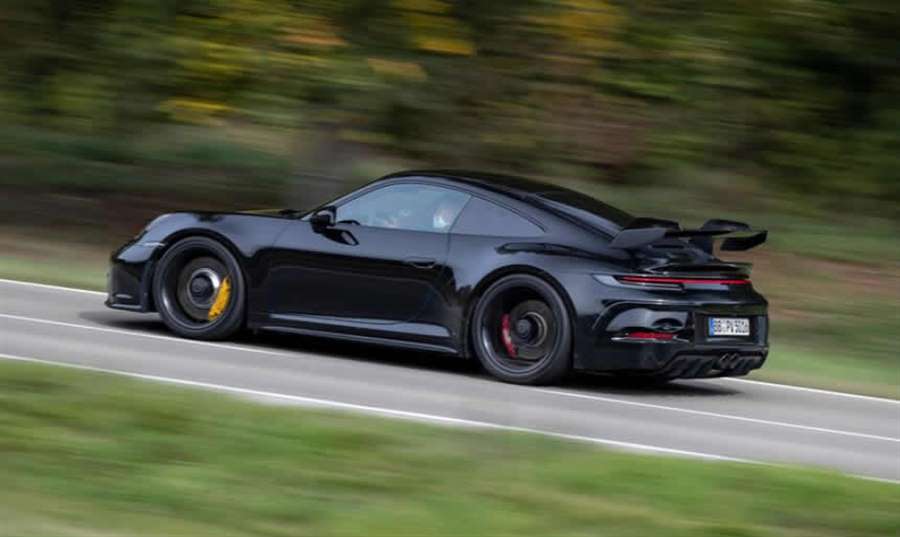 The GT3's rear view is dominated by a giant wing suspended beneath two stanchions that rise up from either side of the engine cover. The wing set the internet buzzing the moment the first prototypes were spotted, and a lot of the buzz from the hot take commentariat was less than favorable. The wing is not a fashion statement. It's pure racing technology. Because the underside of the wing is the most critical surface in terms of generating downforce, the top mount system makes it more aerodynamically efficient and effective. And while I can't give you any detail, what I can say you haven't seen the wing stanchions in their production form yet. Undisguised, they are works of art.

Under the wing is a new engine cover with a ducktail. When the rear wing is in the most aggressive of its three settings, its underside profile and the profile of the ducktail are a mirror image. The ducktail helps manage the laminar flow over the roof, to the point that the ram air scoops that featured on the 991 versions of the GT3 are not needed. Air goes into the engine intake via the vents at the base of the rear window. Preuninger says the old-style scoops would have interfered with the efficiency of the rear wing.

Before we head back to Weissach the man who's been instrumental in creating some of the greatest 911s ever built eloquently sums up what he believes to be the essence of a Porsche 911 GT3. "It has to be a joy to drive," he says. "It must be communicative, transparent, honest, at any speed. It has to scream 'drive me'."