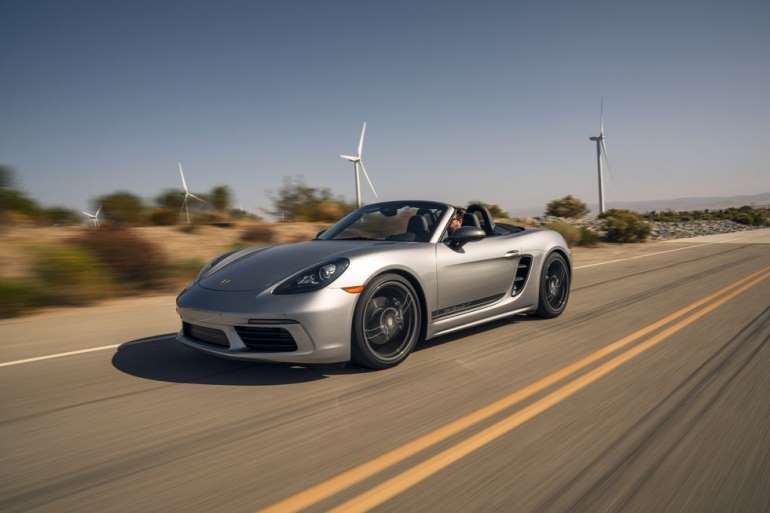 Sports cars don't ride this well. After a few miles, disbelief turns to awe. You see, this Porsche Boxster T is aimed directly at the lunatic fringe of car buyers who crave the sportiest handling in a base Boxster. We had a short drive of a European-spec Boxster T in 2019, but we've now spent a few days surfing the potholes and shattered asphalt of our home turf in the United States version. And an apex-slaying suspension just isn't supposed to be this livable. 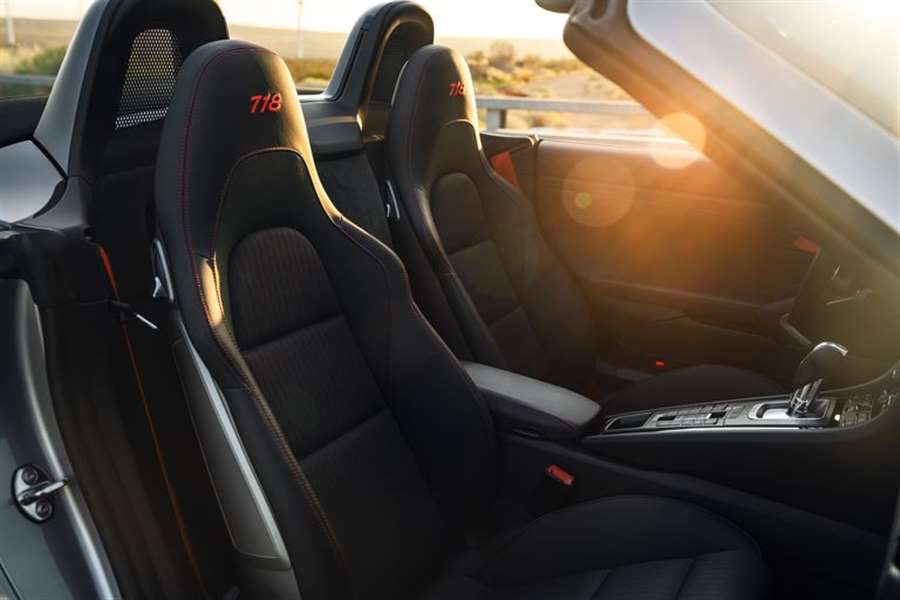 Porsche makes all of the Boxster's chassis goodies standard in the T and then sprinkles some Ferry dust on the whole thing. The suppleness is surprising considering the T model is equipped with a sport suspension that drops the Boxster nearly an inch (20 mm) and includes 20-inch wheels with tires whose sidewalls appear to offer all the impact protection of a leather helmet. And yet, the Boxster T's ride compliance betters that of many sports sedans. No crash, no smash, no harshness.

Vital to the ride quality are the sport package's standard adaptive dampers—PASM in Porsche language—that adeptly smooths those high-frequency jolts that tend to discombobulate performance cars. A button next to the shifter allows the driver to tighten up the dampers' responses, but there's no real reason to take them out of Normal mode since they continuously adapt to how hard you're driving and whatever bad breaks the road throws at them. But, if you want to ruin the ride, go right ahead and select Sport. 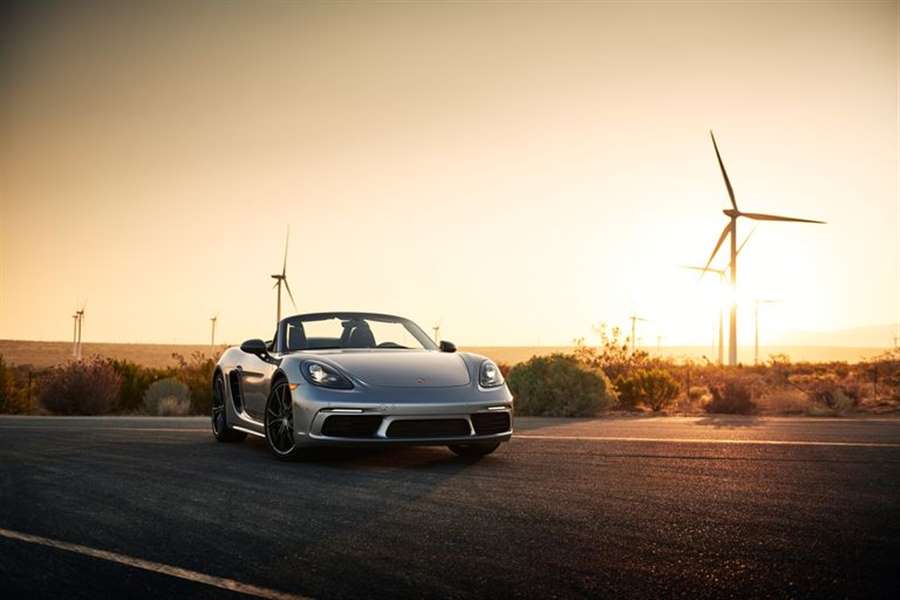 If that over-the-road grace is surprising, the Boxster T's handling isn't. Like a regular Boxster or Boxster S, the T's moves and primary controls foster a close connection that shrinks the car around you. In addition to the sport suspension and 20-inch wheels, the T model makes a few other optional bits standard fare. Every Boxster T comes with brake-based torque vectoring that helps rotate the car into corners and active engine mounts that stiffen or soften to help keep engine motions from upsetting the handling.

A small-diameter sport steering wheel with a drive-mode selector knob is also standard. As precise as the atomic clock, the steering sends all the right signals from the tires and road without any kick or ugliness. 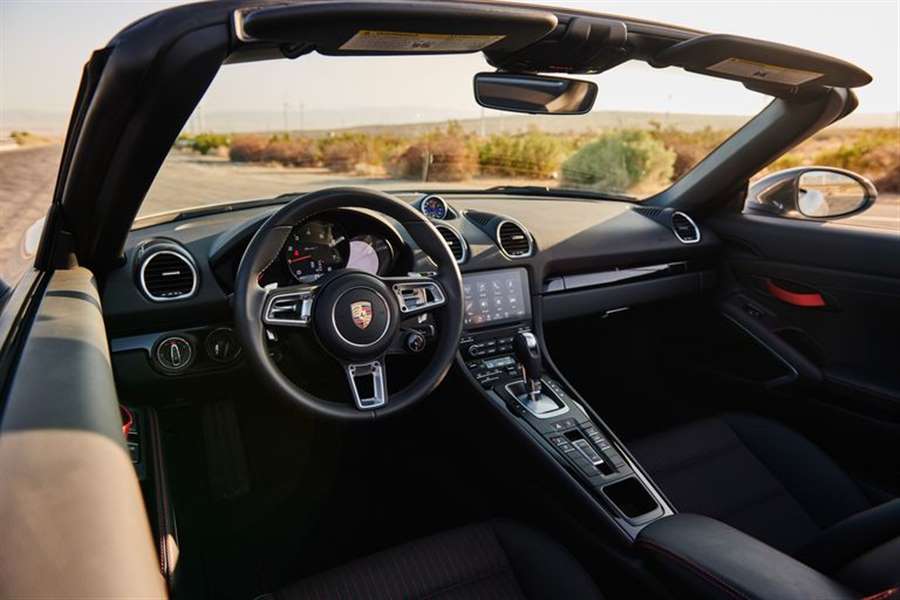 What the T doesn't add is more power. Bolted in behind the driver is the same 300-hp 2.0-liter flat-four that has powered the base Boxster since 2017. The 2.0-liter pulls hard from low rpm once the turbo lights things up, and the engine delivers more than enough acceleration to dispel your regrets over foregoing the 350-hp Boxster S. The flat-four issues a guttural grumble, especially at idle, but the sound improves when zinged to the 7500-rpm redline. The engine will never be confused with a BMW inline-six—or even Porsche's flat-sixes—but tries to compensate for its inability to carry a tune with an angry exhaust note.

Coupled with the optional seven-speed dual-clutch automatic transmission ($3730), we expect the Boxster T to get to 60 mph in 3.8 seconds, the same time as a mechanically identical PDK Boxster we tested back in 2017. All automatic T models will be able to repeat that performance as many times as you please, since they come standard with the Sport Chrono Package that adds the all-important launch-control function. Left foot on the brake pedal, floor the accelerator, release the brakes, and there you have it: the perfect launch, easy enough to merit an infomercial.

Still, we'd skip the dual-clutch automatic in favor of the six-speed manual. Not only is it's less expensive, but it's more in keeping with the driving-joy ethos of the T. In our testing of the non-T Boxster manual, the DIY gearbox runs to 60 mph in 4.3 seconds. Plenty quick. 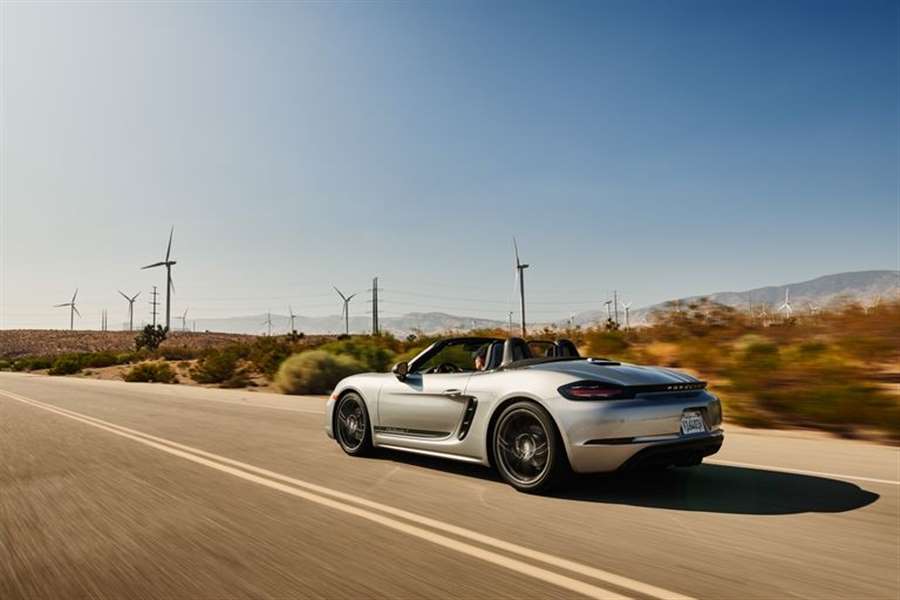 Some Boxster buyers might wonder about the T's cloth and leather seats. Porsche's puritanical models of the past—the 1988 911 Club Sport, the 1992 911 RS America, and the 1993 911 Speedster—came with pinstriped cloth upholstery, and the T's cloth seats speak to its mission statement. Cloth is grippier than leather, so the thinking is that since you love corners enough to buy this car, you'll want the cloth holding your butt in place. Fabric door pulls replace door handles, another nod to Porsche's racing heritage and the GT models. Our test car wore the T Interior Package ($2770) that adds contrasting stitching throughout and a few bits of trim. At $2770, the option seems expensive for the minor dress-up.

The Boxster T starts at $69,850, or $8900 more than the base Boxster. With one exception, it's possible to add the T's many chassis options to a base Boxster, and the price works out to be about the same as the T. What you miss out on are the T's even lower Sport suspension (a 0.8-inch drop versus 0.4 inch) and its heritage-inspired cloth interior and door pulls. And, while you can build a Boxster to mimic most of the T's goodies, it's unlikely you'd ever find one on a dealer lot. By bundling these options in a new model, dealers can easily order an enthusiast special, and enthusiasts can skip the special order from Stuttgart. The T makes a handling-optimized Boxster easy to find, and its ride makes it easy to drive every day.