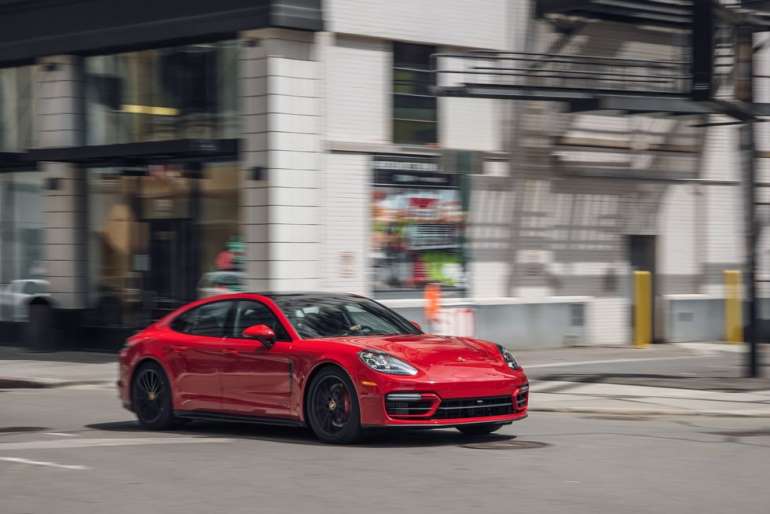 Just as we've become comfortable with there being Porsche luxury sedans and SUVs, the company has started to throw more curveballs at us. While the 911 and the 718 sports cars still tug at our heartstrings, they've now been joined by an electric Porsche in the form of the Taycan sedan, multiple Cross and Sport Turismo station wagons, and whatever the Cayenne coupe is trying to be. Against this backdrop, the four-door Panamera, even in its most driver-focused GTS configuration, is starting to seem positively conventional—possibly even a bit irrelevant.

Porsche is trying to keep the Panamera in the conversation by updating it for the 2021 model year with a few new configurations and minor styling tweaks. Among those changes, the GTS model tested here now develops 473 horsepower from its twin-turbo 4.0-liter V-8, a gain of 20 ponies over last year. Within the Panamera lineup, which ranges from the 325-hp base V-6 model all the way up to the 690-hp Turbo S E-Hybrid, the GTS remains the cheapest way to get a V-8 in a Panamera, and its finely honed chassis setup lends it the sharpest responses of the bunch. As before, the GTS features all-wheel drive and an eight-speed dual-clutch automatic transmission. Also unchanged for 2021 is the exhaust note of the GTS's mellifluous V-8, which continues to emit a powerboat-like burble at idle that builds to a soulful bellow as the engine spins to its 6800-rpm redline.

HIGHS: Gripping V-8 soundtrack, more power than last year, impressive braking and handling for its size, the cheapest path to a V-8 Panamera.

Unfortunately, we didn't see the results of the latest power bump at the test track. Compared with the 2019 Panamera GTS we last tested, the 2021 iteration's launch-control-enabled 3.2-second zero-to-60-mph run was a tenth of a second slower, a difference it maintained over its 11.7-second, 116-mph quarter-mile pass. That's hardly to say the latest GTS feels slow—even without launch control the GTS does the 5-to-60-mph sprint in 4.2 seconds—but we would've expected at least a slight improvement in acceleration considering that the newer, 4714-pound car weighed a scant 35 pounds more than before.

Conversely, the 2021 GTS did beat out its predecessor on the skidpad and under braking. Riding on 20-inch Michelin Pilot Sport 4S summer tires, it outgripped the 2019 model by 0.01 g (1.02 g) and stopped from 70 mph in nine fewer feet (145 feet). Those are sports-car-worthy figures, and they combine with the gutsy V-8, the clairvoyant dual-clutch gearbox, and the GTS's fluid steering action to produce a stirring driving experience on pretty much any road.

LOWS: No quicker than before, still awfully expensive, looks plain next to the newer Taycan.

Putting our test car's performance numbers into context is complicated by the strength of its competition, though. For example, the electric Taycan 4S, which starts at $105,150 to the Panamera GTS's $130,650, is only 0.2 second slower to 60 mph, and it pulled 1.03 g on the skidpad. What's more, the Taycan packs a greater visual punch for most onlookers. While the second-generation Panamera's proportions are undoubtedly more attractive than the original's hunchback design, we think that the Taycan is a far better-looking interpretation of a four-door Porsche, even if it is considerably smaller inside. But if highway range is what you're after, the Panamera GTS dominates the Taycan 4S's 220 miles between charges. We averaged 30 mpg at 75 mph, which translates to a bladder-busting 710 miles between fueling.

It's also worth noting that the winner of our most recent high-performance-luxury-four-door comparison test, the Audi RS7, will only set you back $115,045 to start. That 591-hp Audi also beats the Panamera GTS in our acceleration tests, as it should, yet maintains an impressive degree of luxury-car comfort.

Porsche's formula for its GTS models generally includes some value packaging compared to similarly equipped lesser versions. That positioning does apply to the Panamera, but it's tough to call the GTS variant a smart buy unless it's in the company of the 620-hp Turbo S model (base price, $179,050) or the 689-hp Turbo S E-Hybrid ($189,050). Even with a relatively light load of options for a Porsche, our test car stickered at $148,800 yet lacked extras such as adaptive cruise control and ventilated seats.

It wasn't long ago that the Panamera was abuzz with attention, both positive and negative, as it brought Porsche into a new, profitable market segment. But as the brand enters a new era, the luster of its once controversial four-door hatchback is beginning to fade as more enticing alternatives crop up both within the Porsche lineup and elsewhere in the high-performance luxury space. Along with the Taycan, we imagine the strength of the Cayenne lineup, including the new-for-2021 GTS model, will continue to hamper Panamera sales, which amounted to a paltry 3870 units last year—less than every other Porsche model except for the 718 sports cars. As engaging as the GTS is to drive for a sports sedan, we won't be shocked if the Panamera doesn't return for a third generation.