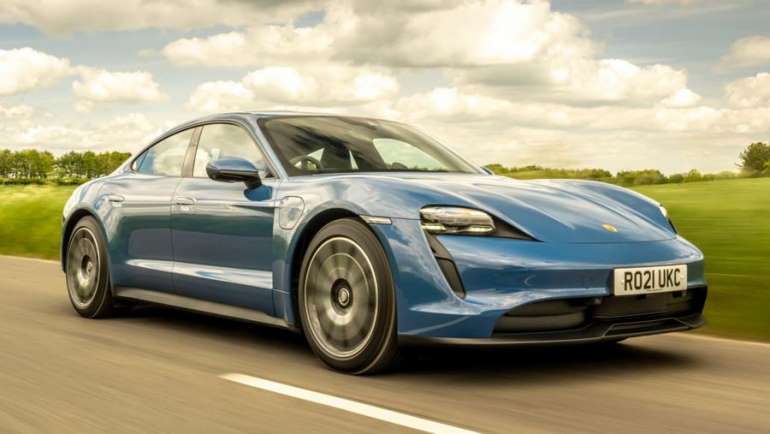 The entry-level Porsche Taycan loses four-wheel drive, but is sharper as a result

Verdict
This latest Porsche Taycan proves that the car’s high points are at the extremes of the range. If you want thrilling, mind-bending performance, get the Turbo S. If you want a version with a great real-world range, its own unique character and a significantly reduced price, then this new entry point is the best buy for most. A brilliant EV line-up just got even better. 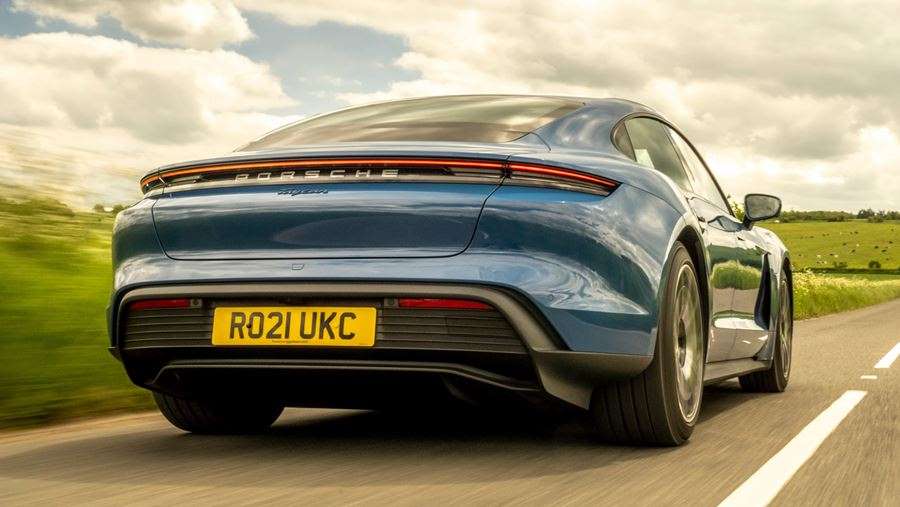 What you’re looking at here is the new Porsche Taycan. That’s just ‘Taycan’, without any extra garnish attached to the name, because it’s the new entry point for the high-performance line-up. Before options, prices start from £70,690, so it’s a full £12,890 less than the next model in the line-up, the all-wheel drive Taycan 4S.

On the face of it, it’s hard to see what it loses. There’s still the same dramatic body, the same driver-focused cockpit, and the same battery as the 4S – 79.2kWh as standard, or 93.4kWh for the upgraded Performance Battery Plus pack fitted here. 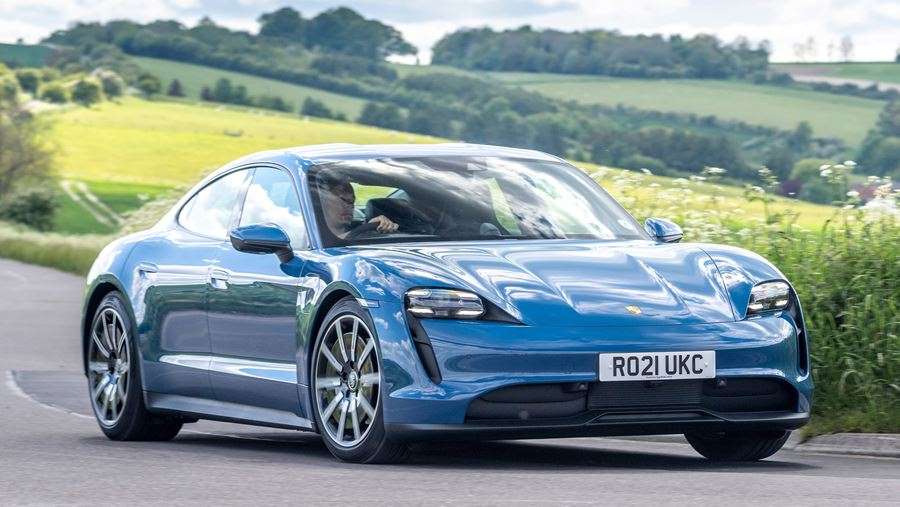 There are two main features this base model lacks, but it turns out they’re hardly missed. Until now, the Taycan range has exclusively offered four-wheel drive, with a motor driving each axle. This new variant drops the front motor to make it the only rear-wheel-drive option. That means it’s down on power and torque, with a mere 424bhp and 345Nm compared with the 523bhp and 640Nm that the 4S gets in launch control mode. Adding the Performance Battery Plus raises those figures slightly to 469bhp and 357Nm, though.

As a result, the 0-62mph dash takes 5.4 seconds – 1.4 longer than the 4S. Leave the Taycan in its Normal drive mode and its straight-line punch is a world away from the mind-bending speed of the Turbo and Turbo S models. But in almost any real-world situation, it’s still more than quick enough. 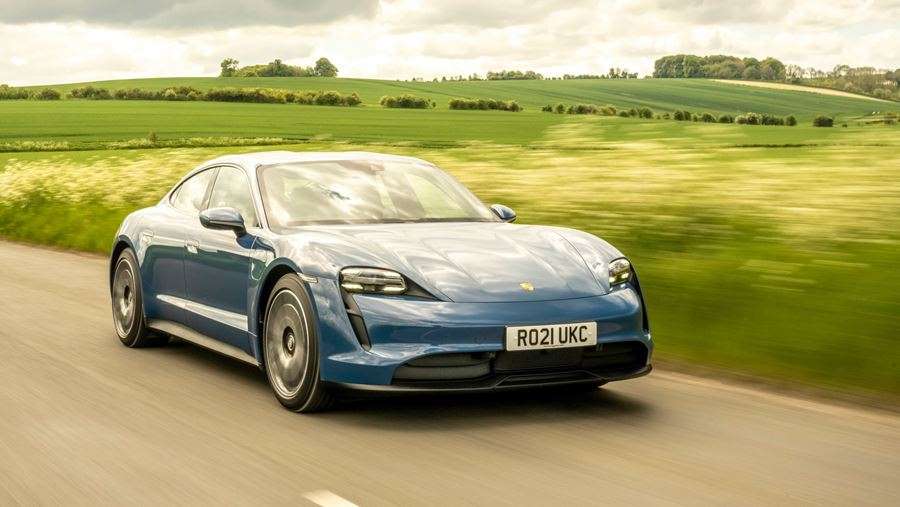 Twist the steering wheel-mounted drive-mode dial one step clockwise into Sport, or a step further into Sport Plus, and the full potential is revealed. Here the Taycan abruptly shunts down from its energy-saving high gear into the lower ratio for more lively low-speed acceleration. Now the car leaps forward dramatically, yet still in eerie silence. The 49-74mph time of three seconds may be 0.7 seconds off the 4S, but it’s still quicker than a 718 Boxster.

Ditching the front motor means the Taycan has lost some of its performance, but it also means that it has lost weight. It undercuts the 4S by 90kg, and while that’s not game-changing in a car that weighs 2,130kg with the big battery, most of that mass has disappeared from over the front wheels. 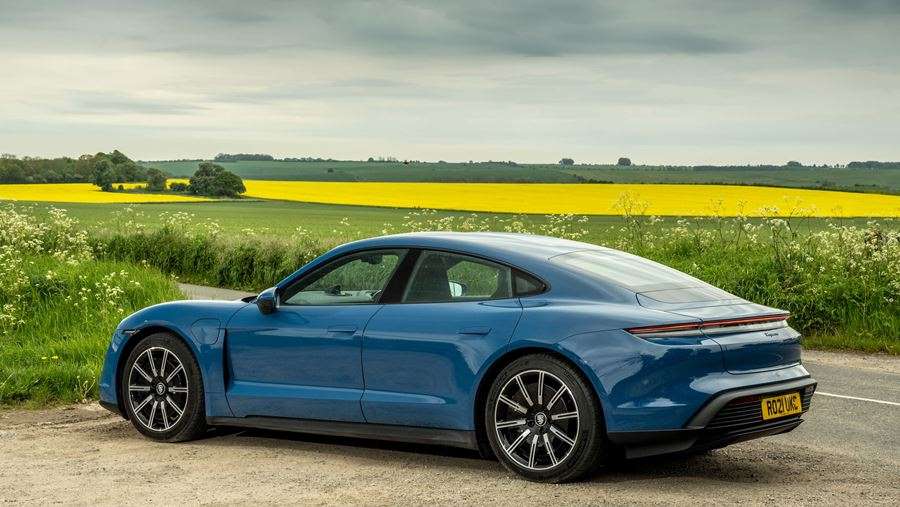 This has a subtle but profound effect on the steering; it’s precise and beautifully weighted as ever, but with less resistance when the front wheels load up through a corner. It makes it feel keener to turn in.

Which brings us on to the second significant change to this version. In a departure from the rest of the range, the Taycan goes without air suspension; it gets steel springs instead. 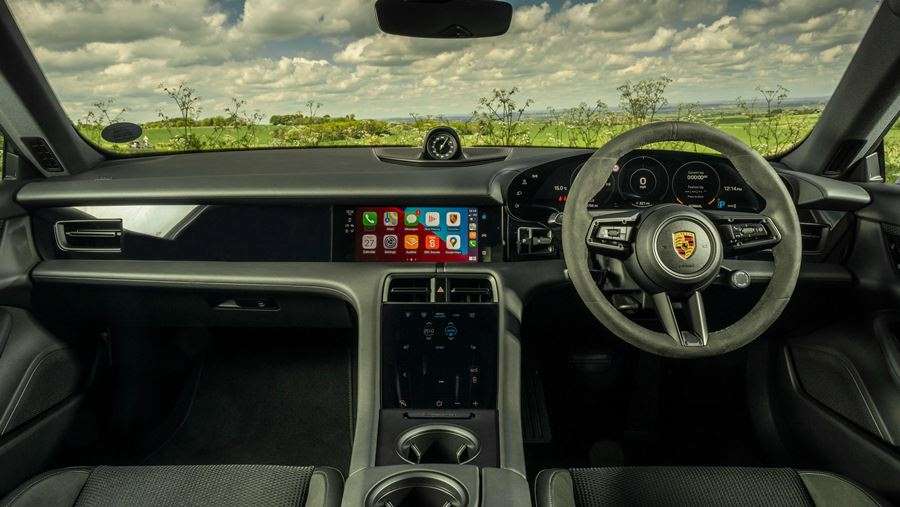 While the air set-up delivers a floaty ride at a cruise, it can also thump into harsh bumps at speed. By contrast, this coil layout reacts more quickly to shocks. Through the turns themselves, there’s very little to separate the two systems. With such a low centre of gravity, the Taycan remains incredibly flat, grip levels are astonishing, and the overall balance means that it’s an easy car to trust.

Even with only two driven wheels, traction is remarkable. In the dry the Michelin Pilot Sport 4 tyres at the back barely chirp in protest, even when the throttle pedal is mashed into the floor out of a tight corner. Indeed, the only time the tyres do protest is under heavy braking. 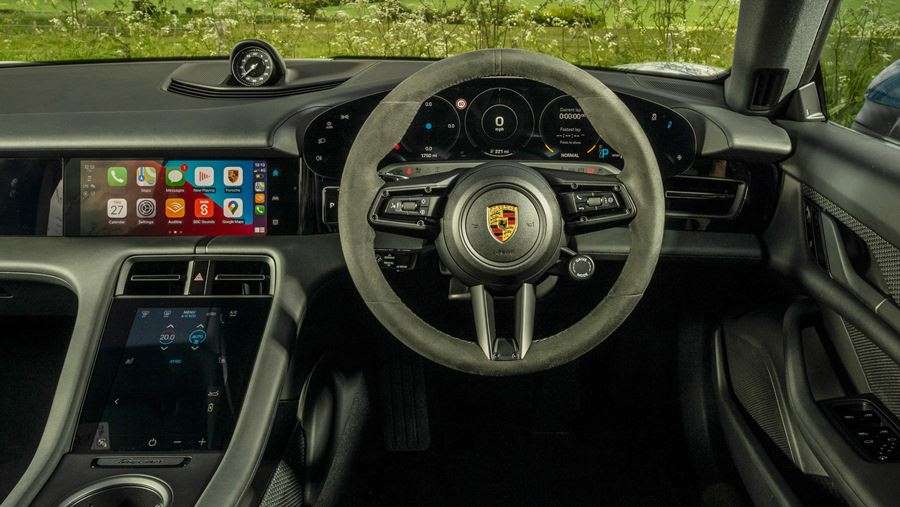 Strong as they are, the brakes aren’t quite perfect, however. The energy recovery system, which uses drag from the motor to slow the car down and charge the battery, is weak; there’s no single-pedal option here, and no steering wheel paddles to adjust the regen on the fly. The transition between regenerative braking through the pedal and regular braking from the discs and pads is a little jerky, so it’s not always easy to bring the car to a smooth stop.

This is a minor flaw, though, in what is otherwise a hugely accomplished car. While the Taycan Turbo S grabs the headlines for its neck-straining straight-line shove, this entry point to the range is otherwise the most entertaining and involving Taycan to drive on a daily basis.

It’s also one of the most efficient, too. Losing the extra weight has boosted the car’s range; equipped with the optional larger battery, the Taycan will cover 299 miles between charges. On a warm day, at a 99 per cent charge in Normal mode.