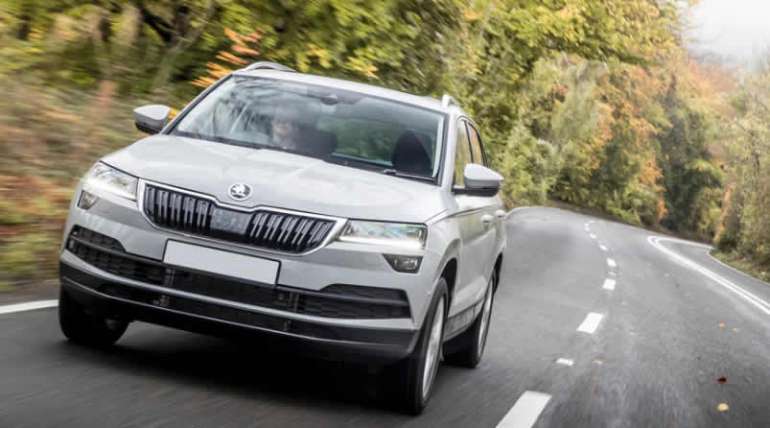 If you want a well-built small SUV with plenty of space, the Skoda Karoq is well worth a look. Just don’t expect to be wowed by its design or the way it goes around corners.

The Skoda Karoq is the Czech brand doing what it does best – providing practical family transport with plenty of equipment and few fripperies. It’s comfortable, too, but you’ll have to look elsewhere if you want style and driving entertainment.

In short, it’s the knife and fork of the SUV world, dead simple and wonderfully effective. 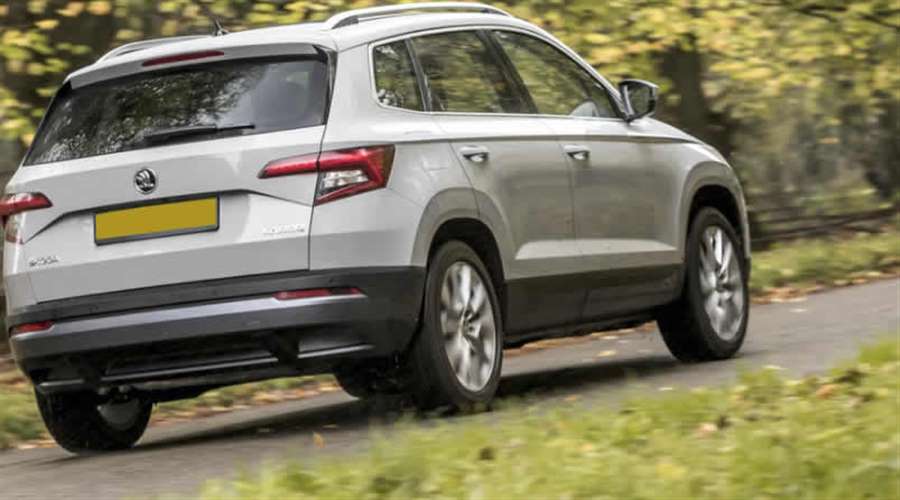 Having said all that, the Skoda Karoq is an excellent choice if you want a roomy small SUV with a raised driving position and a solid-feeling interior. As an added bonus, it comes with loads of clever features that’ll make it dead easy to live with.

The Skoda Karoq isn’t a car to shout about all its clever kit, though – it certainly doesn’t look as flashy as the sportier Hyundai Tucson and Kia Sportage. You do get some cool two-piece headlights like on the larger Kodiaq and the Karoq’s raised ride height means it’ll still tower over most conventional family hatchbacks in the school car park.

Step inside, and the Skoda’s sensible, staid theme continues – garish colours and oddly placed buttons just aren’t Skoda’s style. While this might mean the Karoq’s cabin isn’t particularly memorable, it does mean everything’s a doddle to navigate and use – including the standard 8-inch touchscreen infotainment system.

You’ll be sitting comfortably while you fiddle with the Skoda’s built-in gizmos, too. Every model comes with height-adjustable front seats to help you get settled and there’s absolutely loads of space for tall adults to stretch out.

The Skoda Karoq’s sliding rear seats and wide cabin mean three adults won’t feel like tinned sardines in the back and the boot’s roomy enough to carry everything you need for a family week away. It’s easy to load and you can even remove the back seats in high-spec cars to carry some seriously bulky loads, just like in a van.

The Skoda Karoq is a no-frills family SUV with a very practical cabin and a range of sensible, economical engines.
Mat Watson, carwow expert

That said, the Skoda Karoq drives much better than any van ever will. Entry-level SE models have comfy suspension that only jars over sharp bumps and the cabin is quiet at a cruise – save for a little bit of wind noise coming from the door mirrors. 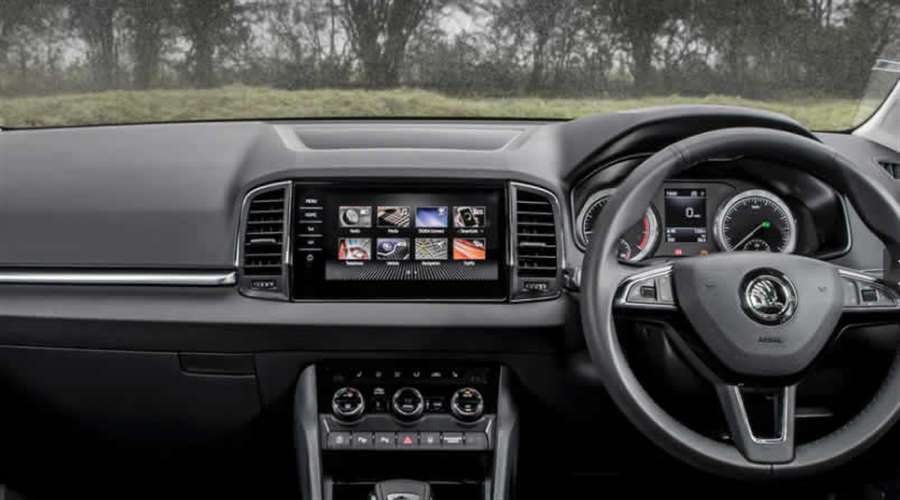 You won’t notice any of this around town, but the slightly jerky automatic gearbox can start to frustrate when pulling out of junctions and parking in town.

Stick to the standard six-speed manual and one of the Skoda Karoq’s smaller petrol engines though, and it feels right at home nipping to the shops or pottering along urban streets.

If motorway journeys are more your thing, a diesel will be more economical and you’ll want to consider the optional adaptive cruise control that’ll accelerate, brake and steer to keep you in lane.

All this makes the sensible Skoda Karoq one of the safest and most practical small family SUVs on sale. It’s well worth seeing how much you can save by checking out our Skoda Karoq deals, then.

The origins of the Karoq name goes deeper than that, however. The name is derived from Alutiiq – a native Alaskan language. Karoq is a combination of the terms ‘KAA’RAQ’ (car) and ‘RUQ’ (arrow – an arrow is part of the Skoda logo). Hence Karoq.

Where is the Skoda Karoq made?
The Skoda Karoq is made at Skoda’s main plant in Mlada Boleslav alongside the Octavia, Fabia, Scala and the new Kamiq SUV.

How practical is it?
The Skoda Karoq has a big boot and space inside for four tall adults. The VarioFlex back seats can slide and recline individually, or be removed for a huge load bay

The Skoda Karoq’s interior is logically laid out, solidly built and packed with useful features.

The large glovebox lid feels robust and opens with a damped action, you get flashes of chrome and reasonable looking trim pieces that brighten up the interior. The only black mark in terms of quality is the cheap-looking plastic used for the lower half of the doors.

Even entry-level cars get an 8-inch colour touchscreen with clear graphics which does wonders for adding a bit of a high-tech air to the Karoq’s cabin.
SE models have chrome door handles and chrome surrounds for the air vents that give them a classier look than an equivalent Nissan Qashqai. The Karoq comes with attractive dark cloth upholstery that should hide bad stains very well. SE L models are worth considering though because they come with suede-effect upholstery that looks and feels expensive. 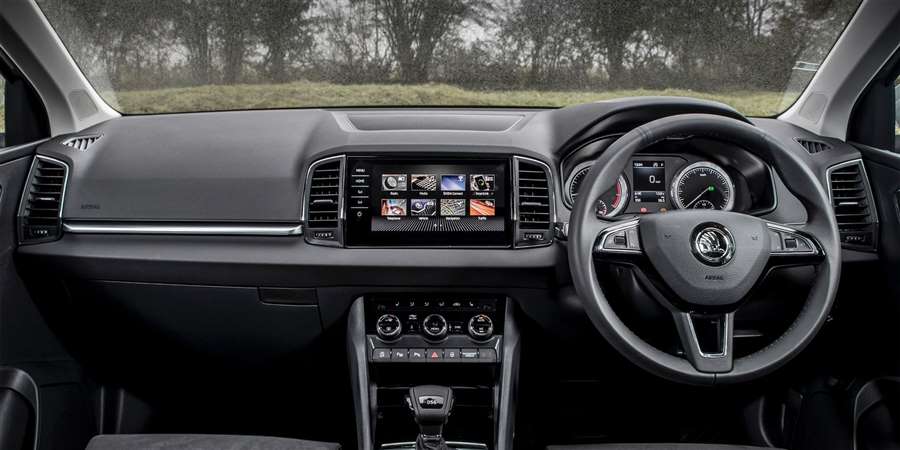 In fact, it’s nicer than the leather you get in Edition models, although the latter should be a lot easier to keep clean. Edition models also get lights that illuminate the sides of the car at night – so you don’t hop out into puddles – and ambient lighting that makes the interior look prettier at night.

If you fancy something a bit sportier, there’s also the aptly named Sportline model. These versions come with more supportive front seats with some contrasting silver trim, a set of aluminium pedals and a posher leather-trimmed steering wheel.

Even the entry-level SE Karoq comes with an 8-inch touchscreen that’s smart looking and easy to use.

It’s actually slightly easier to operate than the upgraded system because it has a couple of large knobs for volume and scrolling in and out of maps.

Sat-nav doesn’t come as standard, but you do get Android Auto, Apple CarPlay and Smartlink so you can use the navigation apps on your compatible smartphone via the Karoq’s big screen. It’s such a good system that you’ll not miss having integrated sat-nav and it also makes it easier to access your phone’s contact list and play music.

Mid-range SE L models’ infotainment screens look exactly the same but do come with Skoda’s own sat-nav system. Its graphics are slightly more detailed than the ones you get when you use your phone, but your phone’s sat-nav is better because it can route around congestion.

Edition models are the only ones to come with a 9.2-inch sat-nav screen that has a faster processor – although loading times are quick enough on the other systems – and a higher-resolution display.

Its touch controls – for volume and map scrolling – are trickier to operate when you’re trying to concentrate on driving, but on the plus side, they give the system a pretty, glassy appearance that looks a fair bit posher than the cheaper screens. It also gets gesture control – so you can wave your hand to scroll through menus, but its unresponsiveness means it isn’t worth the extra cash.