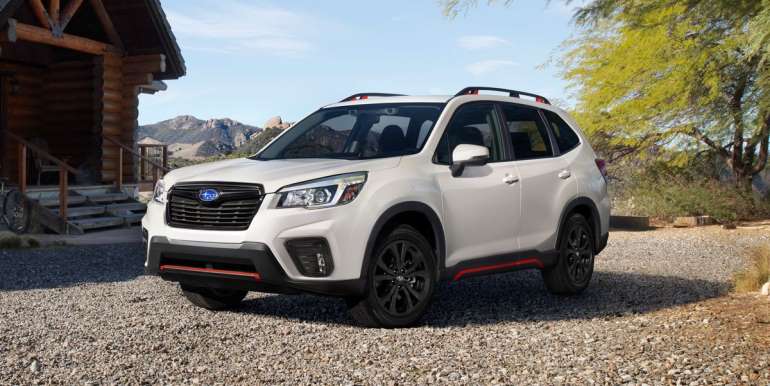 Subaru
The verdict: The 2022 Subaru Forester Wilderness is an off-road-themed trim level of the easy-to-recommend Forester, bringing increased off-road and towing capabilities.

Versus the competition: Fortified with more than just stickers and plastic fenders, the Forester Wilderness is more suited to its purpose than most off-road-themed compact SUVs.

The Subaru Forester is a perennial Cars.com favorite: It’s finished on the podium in our past two compact SUV tests, placing second in 2019 and third in 2021. For 2022, the standout change for the Forester is a new Wilderness trim level, which takes a small SUV with impressive ground clearance and standard all-wheel drive and turns it up a notch, making what Subaru says is the most trail-capable Forester yet.

Three main components are changed on the Wilderness to create its extra capability: tires, suspension and gearing. The Forester Wilderness ends up with double the towing capacity of other trims: 3,000 pounds versus 1,500 pounds. A thorough off-road test will come later — I drove our test Wilderness mostly on-road, with just some light gravel and dirt-road driving for this review — but the Wilderness treatment (including Subaru’s Outback Wilderness) doesn’t make way for hardcore off-roading. It does, however, do more to make these Subarus off-road-ready than many off-road-themed crossovers.

The Wilderness is the most significantly changed version of the Forester for 2022; other trims have minor changes that wouldn’t alter — for better or worse — where the 2022 Subaru Forester placed in our 2021 Compact SUV Challenge.

For how aggressive they look, though, they don’t increase road noise much. The Geolandar A/T G015 is designed to be a daily-driven all-terrain tire; it’s not a max-effort off-road tire. You can feel the tires’ squirminess on-road versus an ordinary passenger-car street tire, but that’s a typical trade-off for the additional capability they offer. Two more attributes that may be associated with the tires are slightly harsher impacts versus the Forester’s standard tires and, on the plus side, confident roadholding on loose gravel and dirt roads.

A surprise-and-delight feature of the Wilderness is that there’s a matching full-size spare tire and wheel, which you’d appreciate if you got a puncture off the beaten path and needed this tire’s capability to get back to a main road.

The Wilderness’ wheels and tires are attached to a lifted suspension that gets its height via longer springs and shock absorbers. Ground clearance is up half an inch — to 9.2 inches from 8.7 inches — which improves approach, departure and breakover angles. The suspension has been tuned to the new ride height, and it’s buttery smooth on-road — though with some slightly harsher impacts than you’d feel in a regular Forester.

On loose dirt and gravel-covered roads, the tires and suspension absorb imperfections at high speeds without upsetting the cabin. That’s in stark contrast to the Ford Bronco Sport Badlands’ suspension, which is also off-road-oriented but feels like it’s made of bricks compared with the pillowy nature of the Forester’s ride. The Bronco Sport has its own advantages, though, like a rip-roaring 250-horsepower engine and torque-vectoring rear axle.

For now, we’ve spent more time in the Wilderness on-road, where the effect of its shorter final drive ratio (4.11:1 versus 3.70:1 in other Foresters) is most notable in improving the Forester’s snappiness and accelerator response. The Wilderness gets up and goes with more vigor than an ordinary Forester, making passing more confidence-inspiring thanks to quicker reactions while at speed. According to Subaru spokesman Charles Ballard, the gearing change was made in the continuously variable automatic transmission through an updated pulley ratio, and the rear axle ratio was optimized to work with it.

The new gearing makes the most of the Forester’s only engine, a 182-hp, 2.5-liter flat-four-cylinder, which in our testing scooted the Wilderness from 0-60 mph faster than the standard Forester: The Wilderness accelerated to 60 mph in 8.6 seconds, versus the 9.57 seconds a Forester Touring took.

On the downside, the Forester’s highway mpg rating took a hard hit from the gearing change, dropping an EPA-estimated 5 mpg, from 33 mpg to 28. The combined rating drops 3 mpg, from 29 mpg to 26, while the city rating is least affected, dropping only 1 mpg (26 mpg to 25). The Wilderness’ 26 mpg combined rating does, however, still compare favorably with other top compact SUV off-road trims: The Ford Bronco Sport Badlands is rated 23 mpg combined, and the Jeep Cherokee Trailhawk has a 21 mpg rating. The Wilderness does come in slightly lower than the Toyota RAV4 TRD Offroad’s 28 mpg rating.

The Forester Wilderness’ towing capacity has doubled to 3,000 pounds versus the standard Forester’s rating, and the Wilderness’ goods are to thank. An external transmission oil cooler helps keep the transmission’s fluid temperatures cool while working, and its higher numeric gear ratios deliver more wheel torque to make the car easier to move under load. (Trucks often include numerically higher gear ratios and transmission coolers in optional towing packages to increase towing capacity.) Ballard said a reinforced transfer case and more powerful radiator fan (up from 120 to 160 watts) also help increase the tow rating. The Forester Wilderness’ towing capacity is notable but not class-leading; other compact SUVs are rated to tow more than 3,000 pounds.

Is the Wilderness Worth It?

While I didn’t experience the Forester Wilderness’ peak off-road capabilities, I liked it even on pavement compared with other Forester trim levels. The new gearing does a lot for accelerator response, while the suspension and new tires make quick work of bad roads. On the downside, fuel economy is hit pretty hard, and there are quirks in all Foresters that can’t be addressed without a redesign — like poor cabin storage, an awkward information display atop the dashboard and excessive wind noise. As a whole, though, even with those quirks you can’t go wrong with a Forester, and this off-road package is more than a few stickers. It’s certainly a big enough change to consider its $34,000 asking price if you’re in need of more off-road or towing capability from your Forester.

Tagged under
More in this category: « 2022 Subaru Forester Wilderness First Drive: Out in the Wild 2022 Subaru WRX Review: Party of One »