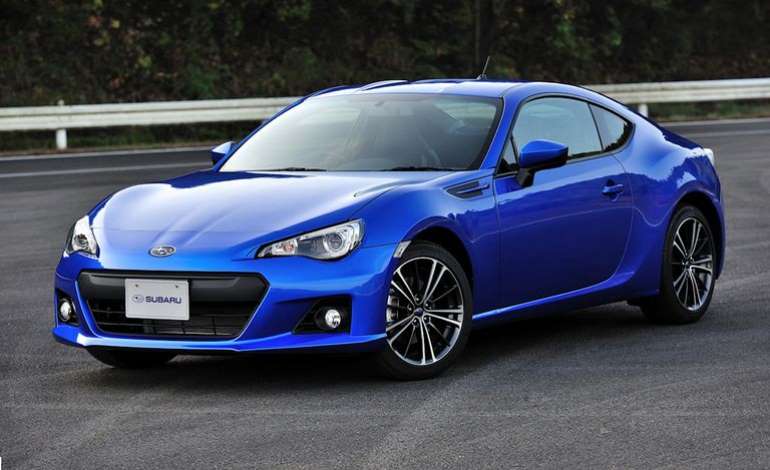 From the Archive: Subaru has the goods, presenting us with an exceptional, clairvoyant, delectable new rear-wheel-drive sports car.

Some things just don't make sense. Why is the food at Outback Steakhouse mostly Cajun style? Why can't Jennifer Aniston find true love? And why would Subaru and Toyota, two companies whose fortunes are built on mainstream sedan sales, collaborate on a rear-drive sports car?

The latter question is a bit easier to answer from the Subaru BRZ perspective. For one, Subaru has a currently breathing reputation for building sporty cars: They may sell in limited volumes, but the WRX and STI are nevertheless Subarus. And Subaru says that the engine in its BRZ, a 2.0-liter flat-four making its first public appearance in this car, will form the basis of its next turbo motor. For its part, Toyota says that its version of the car—to be sold as the Toyota 86 in Japan, as the GT 86 in at least the U.K., and as the Scion FR-S here—makes sense as a first thrust in its plan to again build sporty, fun-to-drive vehicles. Still, this isn't a car that most people saw coming from either manufacturer.

Then again, regardless of the boomerangs mounted on the walls and the "Chaze Frois, Plaze!" coasters, Outback Steakhouse's Alice Springs chicken is delicious—and devastatingly unhealthy, but that's beside the point. The BRZ is likewise delectable; our only gripe about the way it drives is a chassis that leads to understeer at the limit. That, however, is much less likely to give you a heart attack than a jumbo honey-mustard-marinated chicken bosom hidden under a pile of bacon and smothered in melted cheese. Indeed, right up until the nose starts to chatter off line, Subaru's new coupe is gifted with exceptional balance and clairvoyant reflexes. 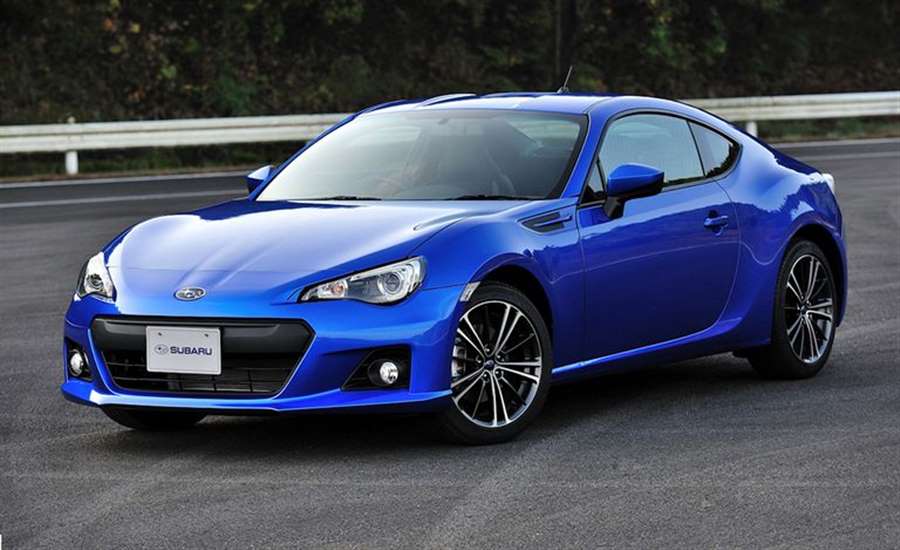 The understeer isn’t a deal breaker; with perfectly timed and moderated inputs (or with huge, pimp-slap jerks on the wheel and heavy stomps on the go pedal), it is possible to avoid it all together and turn it into delicious oversteer. When the rear end goes, even in the wet, the BRZ slides slowly and progressively. It's so easy to catch that you might find yourself fishing in your pocket for spare change with one hand while the other meters yaw around an off-ramp. (Subaru says that Toyota's suspension tune will vary slightly, a tad softer in the front and stiffer out back.) The brake pedal feels a little less wired than the rest of the car, but the binders wind the speedo back toward 0 in a hurry.

Conducting the chassis is steering that is more immediate than anything this side of the Lotus factory. Its heft is perfect for resisting unintentional inputs at the limit. Feedback falls short of perfection, but only slightly; blame the electric steering if you must. The electric motor assisting the BRZ's rack is mounted high up on the firewall, contributing to a slightly higher center of gravity but simultaneously shifting the front/rear weight balance a touch rearward.

In developing the BRZ, Subaru took an almost maniacal approach to weight and its management, keeping it low and evenly distributed between the car's axles. The company claims that 54 percent of this car's mass rides on the front wheels and 46 over the rear, and says that its center of gravity is right around 18 inches high. That latter figure rivals or beats the measurements for the Porsche Cayman and Mazda RX-8, among others.

Helping keep the mass snug against Mother Earth is the FA flat-four. Compared to the FB four found in other Subies, the FA's intake is 2.6 inches lower and the oil pan clings closer to the crankcase, allowing it to be mounted with its crankshaft centerline 2.4 inches lower. Amazingly, the engine is mounted 9.4 inches farther back in the chassis than an Impreza's four. A Subaru spokesman says the two engines share "maybe a few screws," but are otherwise completely separate pieces. We're told the weight difference between the two is negligibly in favor of the A. Placing the engine so far rearward of course helps balance the car, but it also precludes Subaru from fitting an all-wheel-drive system. The company says that it has no room for a turbocharger either, but after peering under the hood, we disagree. Besides, Subaru desperately needs something to tie this car to the rest of its lineup, and a turbocharged STI model would be the perfect solution. Although the BRZ doesn't need more power, it certainly could handle more. We're guessing that a turbo will be part of whatever mid-cycle updates this car sees in two or three years. 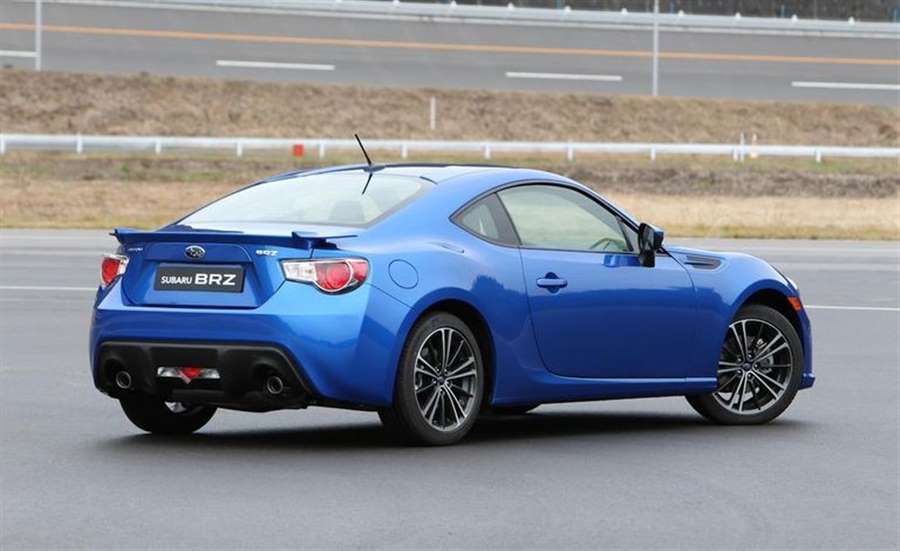 Despite a displacement difference of just 3 cc, the naturally aspirated FA and FB fours have dramatically different outputs. The B's 148 hp and 145 lb-ft of torque (as installed in the Impreza) lag 52 and 6 behind the A's 200 and 151—Subaru's stated output—while the A's 7400-rpm redline is 800 higher. Thank Toyota's fuel-injection setup, which squirts both via intake ports and directly into the cylinder—the system is Big T's lone contribution to the engine—and allows a crushing compression ratio of 12.5:1. "Crushing" is not a descriptor we'd employ for the acceleration, although we estimate a zero-to-60-mph time of around six seconds flat with the six-speed manual; add a couple of tenths with the six-speed auto. Top speed is said to be 143 mph. A resonator pipes sound into the cabin, and above 5000 rpm, there's enough noise inside the car that you'll need to scream to talk. Not that you'll be having much conversation. That said, we wouldn't call the quality of the sound unmistakable; it could be taken for a number of undesirable things. Having heard what aftermarket exhaust companies do for other Subaru flat-fours, though, we’re confident that they can coax a better voice out of this 7400-rpm screamer.

In spite of its higher output, the FA should still manage 30 mpg on the highway, according to Subaru. Underbody paneling helps keep a clean aerodynamic profile, although the company still hasn't decided if the treatment will be standard on all U.S. cars or only on higher trim levels.

Even the Weenies are Treated Well

As mentioned, two six-speeds are available, a manual and an automatic. Following our drive of the BRZ in Japan, the manual had us seeking a temple at which we might make an offering of thanks. The clutch pedal is a touch light—and a touch light on feel—but snaps to attention right off the floor and engages smoothly, and the stubby shifter snicks between gates with ease. Heretics who buy their sports cars with automatics will at least get a good unit. There are two modes in the Subaru: Drive and Sport. Wheel-mounted paddles are standard; in D, the transmission allows them to make gearchange suggestions but still upshifts at redline and downshifts when the driver floors the accelerator. In Sport mode, however, paddle commands are gospel—the way God's lazy, automatic-driving half-brother intended. 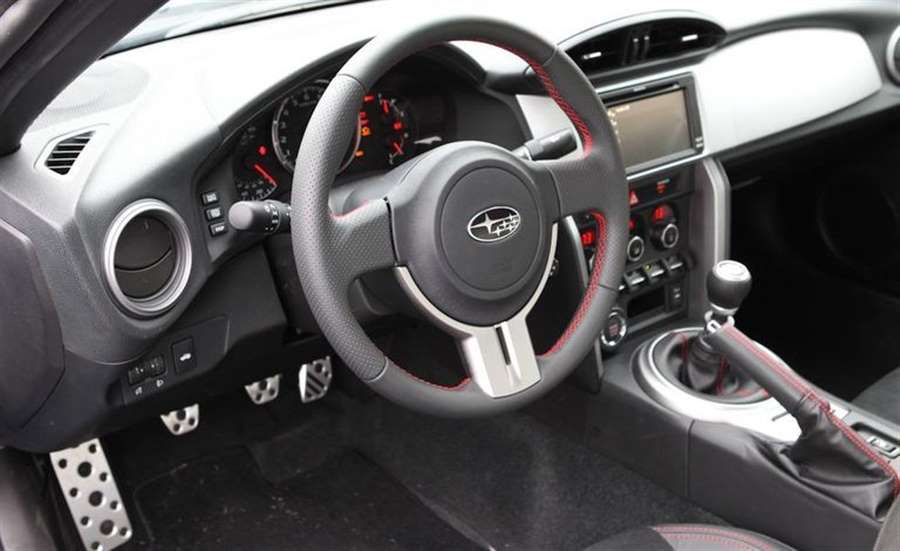 While most of the engineering and chassis work is Subaru's doing, the styling fell to Toyota. It apparently drew a basic coupe shape and—well, it must have seen it created something less than sultry but stuck with it anyway. It's good enough. The view from abaft is actually fairly exciting, with the slope of the greenhouse hesitating just slightly to form a decklid before tumbling into the rear fascia. Only the front fascia, badges, and maybe wheels separate the BRZ from its Toyota—and Scion—sibling. The suggestion of flares on the front fenders merely alludes to the muscular (some might say exaggerated) styling of the various concept cars, but the U-shaped view from the driver's seat over the scooped-out hood is at least unique. Visibility in all directions is much better than most sports cars.

Interior space, on the other hand, is just about par. It's fine up front, and average/shortish adults might even be happy in the back for shorter trips. Subie touts this as the shortest rear-drive 2+2 on the market. So it is. It also says that the car can accommodate a forward-facing child seat in the back. A rear-facing seat, on the other hand, would probably only fit if the parent riding shotgun rides shotgun in a car following behind. The trunk will hold just seven cubic feet of stuff, although both halves of the rear seatback fold for larger loads. According to Subaru, the space was designed from the beginning to hold a set of racing tires and a toolbox in this configuration, although that claim coincided with a PowerPoint slide entitled "Unexpected Utility"; we suspect that's probably the real story behind the tire-hauling ability. Or maybe that's why the tires are just 215 millimeters wide, as fitting a set in the car requires a two-tire stack.

The BRZ goes on sale in spring of 2012 as an early '13 model, at a base price we're now told will be around $25,000. Asked to make sense of the BRZ, a Subaru representative says, "It makes sense if you sell enough of them." In the U.S., Subaru thinks that 5000­ to 7000 per year would be enough. Ultimately, though, a car this good doesn’t need to make sense: Its brilliance is all the explanation we need.