Tesla Track Day! We Drive Flat Out in a Modded Model 3 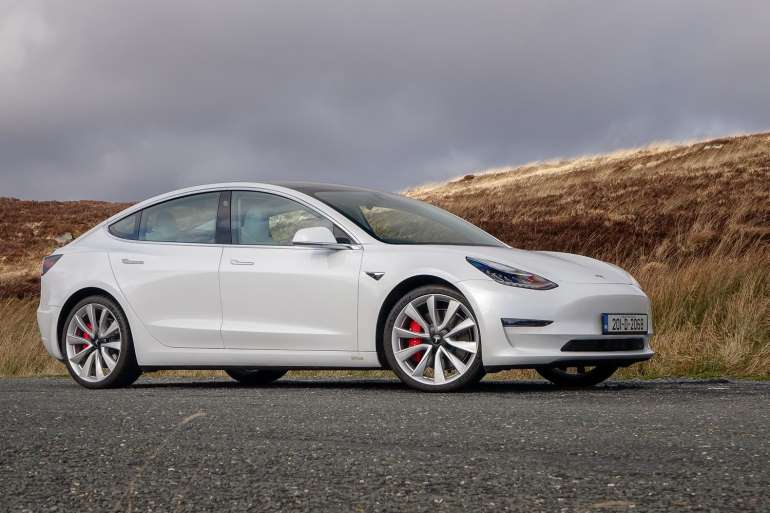 For some, stock has never been enough. Decades of hot rodders, drifters, lowriders, track rats, and every niche in between have forged rich and enduring cultures centered around modifying automobiles. But as the inevitable era of electrification approaches, there are those who believe we're facing an existential threat to the future of automotive enthusiasm itself.

We have to admit, we're a bit spooked ourselves. But after a day of hitting apexes and traveling at triple-digit speeds behind the wheel of a track-prepped Tesla Model 3—the Unplugged Performance Ascension R—we're feeling a lot better about what those who love to drive and tune their cars can expect as the EV revolution gradually takes hold. We got our chance to hustle the Ascension R at California's Buttonwillow Raceway during a Tesla Corsa track day organized by Unplugged Performance. Tesla Corsa is a Tesla-exclusive series that, according to Unplugged co-founder Ben Schaffer, "creates the lowest barrier of entry for anyone with a Tesla to experience their car on-track."

The team behind Unplugged Performance isn't new to the modification game. Schaffer started importing Japanese car tuning parts back in 2000. "In those early stages I was trying to pay to go to the track, so I sold parts to do that, and I turned my hobby into a business," he said. That business is Bulletproof Automotive, which offers a range of components for tuner favorites like the Nissan GT-R, Subaru WRX, and Toyota 86.

At Bulletproof Automotive, "We built a customer base of people who would go to the track and drive on the street with tuned Japanese cars," Schaffer said. At Unplugged Performance, the cars are different, but the thinking isn't: It creates Teslas that are competition-ready yet retain real-world appeal. Unplugged rose out of what Schaffer noticed was an aftermarket void for Teslas that he aimed to help fill. "In hindsight it all makes sense," Schaffer said. "What we're doing now advocating for EV tuning—especially back when there wasn't anyone advocating for it besides us—is similar to what I was doing 20 years ago with Japanese cars." In 2014, Unplugged's Tesla Model S became the first-ever Tesla displayed at the SEMA Show.

Enthusiasm motivates Schaffer: "There's joy in sharing something that you love. Building community around shared passions is my passion. With how divided the world has become, the things that connect us are even more special." Indeed, EVs have been a source of schism among car fans. But as the Ascension R shows, they're also a place where they can align their interests around something that's awesome to drive. Like A Rocket: The Unplugged Performance Ascension R Model 3

At this point, it should be no surprise that Teslas are more than just electrified stoplight dragsters. As a finalist in our 2018 and 2020 Car of the Year contests, we praised the Model 3's "laserlike handling" and called it "the best sport sedan on the market." And it's still damn quick—in Dual Motor Performance specification, the Model 3's 450-hp, 471-lb-ft powertrain launches it to 60 mph in 3.2 seconds.

Improving on greatness is a challenge that Unplugged Performance welcomes. "Stock Model 3s are amazingly capable and only get better when you modify them," Schaffer said. Named in tribute to SpaceX, Tesla's cousin company and Unplugged Performance's neighbor in Los Angeles, the Ascension R has been extensively built and tuned to perform on a track. Yet daily drivability remains a focus.

Basic aerodynamic tenets vex range-sensitive EVs—more downforce equals more drag equals less miles to a charge. Thus, the Ascension R's body kit is intended to be as functional as it is aesthetic. "What matters for a car like this is not just making downforce, but making clean downforce," Schaffer said. Working with aerodynamicists and computational fluid dynamics, Unplugged Performance has increased the car's downforce with minimal drag penalty. Straight-line acceleration and efficiency remain within 1 percent of a stock Model 3. Among the Ascension R's carbon-fiber body parts is a front splitter crafted by Koenigsegg. The distinctive bumpers have also been engineered around the precisely calibrated sensors that enable Tesla's driver assist capabilities.

Rolling stock is another area that can significantly impact an EV's range, and the Ascension R's wide and sticky Yokohama Advan A052 tires certainly weren't chosen for efficiency. Eddy Castelan, Unplugged Performance's motorsports manager, said it's common for Tesla Corsa attendees to drive to and from the event on street wheels and tires, with a track set inside the car. Once they're bolted on, "the only two things to worry about are your charge level and tire pressure—super simple," Castelan said.

In one of our earlier Model 3 track experiences, Tesla saw fit to equip the car with track brake pads. Unplugged Performance goes further by swapping the front brake setup for 15.5-inch carbon-ceramic rotors bitten by six-piston calipers, along with track-focused pads on the stock rear iron rotors. Given those changes to the friction braking system, the Ascension R can decelerate strongly without reliance on the car's regenerative braking. Because regen pushes heat into the powertrain, Schaffer said many Tesla Corsa drivers prefer running without it so the battery stays cooler over a session. A cooler battery delivers more consistent power. The team also chose brake pads that don't require high heat to function, preserving the Ascension R's ease of use in the real world, where a driver might want regen. More than anything, the Ascension R's speed comes from its chassis changes. "Suspension tuning is everything for the car, and it's a very heavy car," Castelan said. Once a Model 3 receives parts like the company's billet control arms, adjustable anti-roll bars, external reservoir coil-overs, and forged aluminum wheels, fine-tuning can begin. Castelan's job: "All I do is figure out how to make these cars faster without adding power."

That's right—no additional power. Unplugged Performance doesn't change the powertrain, not because of technical impossibility but because it prefers to leave areas that might be affected by software updates untouched. And really, Tesla's powertrain is impressive enough as is. The Model 3 Performance's Track mode allows for variable torque split between its two motors, anything from 100 percent in front to 100 percent out back—all adjustable in real time, even in between corners. Castelan collaborates with Unplugged Performance's roster of pro drivers, which includes MotorTrend friend and Tesla pilot Randy Pobst, to set profiles for different chassis setups or tracks that are stored and selected through the touchscreen.

Still—all this work and not a single extra pony? Scoff if you want, but the results prove that power isn't everything. "I remember coming to Buttonwillow at the beginning when we were excited about breaking a two-minute lap—and now we're touching 1:50," Castelan said. Indeed, with development driver Craig Coker at the wheel, the Ascension R set a 1:50.35 lap record around the track's clockwise 13-turn configuration. A 991-generation Porsche GT3 RS? 1:50.40. We held that context in our helmet as we buckled up for session one.

On Track In The World's Fastest Model 3

Rolling from the garage toward the staging area, we watched other cars render on the Tesla's touchscreen, confirming that Unplugged Performance had situated those sensors accurately in the bumper. On Coker's recommendation, we set up for the initial session in Track mode with the torque split and stability control in their neutral positions and light regen. Then the marshal signaled—go time. Feeling a powerful electric car's crushing acceleration absent an engine note remains surreal. Without turbos to spool, a redline to reach, or shifts to ace (or botch), driving the Ascension R was highly intuitive, letting our focus sharpen on how much we could floor it at any given moment. There's superb linearity to the accelerator pedal, with every input backed by direct, instantaneous response. Power trailed off as three-digit speeds ticked onto the display, but at anything below that, the car leapt out of corners and across shorter straights.

The laserlike handling we lauded previously seemed enhanced by Unplugged Performance's chassis work. The Ascension R rode planted and smooth, absorbing Buttonwillow's cracked, undulating pavement and apex curbs. Free of a heavy engine between its front wheels, there felt like near zero latency from steering wheel motions to where the nose pointed—agile and eager yet determined and free of understeer.

Slowing for Turn 1 and Turn 12, each at the end of Buttonwillow's longest straights, was well within grasp for the 4,000-odd-pound Ascension R's upgraded brakes. They clamped assertively with great feel, letting us back off precisely before tossing the car in. For trundling around the paddock  and on turns that needed just a dab, more reactivity from the heavy pedal would have helped. Still, even light regen allowed some control of speed by modulating the accelerator, and we detected no fade at any point.

Four-lap session complete, we returned to the garage—having drained about 30 miles of range in just over 10 miles of driving. Tesla Corsa events are held at tracks selected for charging convenience, and they're structured to ensure ample time between sessions; the closest Supercharger to Buttonwillow Raceway is about 10 miles south on California's I-5 highway. During downtime, we saw drivers juicing up at 50-amp outlets in the track's garages and RV sites. Schaffer dismissed that recharging hinders the viability of an EV track day: "It's one of these things where if you extrapolate outward, eventually concerns about it go away as infrastructure builds up." To that point, installation of Buttonwillow Raceway's onsite Supercharger station is underway.

As we suited up for our second session, Coker encouraged us to play with Track mode settings to send more torque to the rear and relax the nannies. Back on track, the Ascension R immediately showed a different character. It now wanted to oversteer, powering around with newfound friskiness. With less stability intervention we detected some of the rear-end gyrations we'd felt in prior Model 3 drives, especially as cambers flattened out. Those were of little consequence. Altering Track mode settings corner to corner added fresh layers of involvement. Even as the battery seemed to wane just slightly in the final stretches of the last lap, we would have loved more time to explore this real-time tuning—like one of Coker's profiles, simply labeled "Drift." A Thrilling Future For Tuners

With the Ascension R, Unplugged Performance transformed the Model 3 from a zippy luxury sedan into a track-attacking machine. That's evidenced not only by our experience behind the wheel but also by the world-rivaling lap times it can post in the hands of a pro. Although we noticed minor Tesla-esque quality issues in Ascension R's cabin, those were forgivable for the thrill it delivered, and it's still opulent in comparison to typically stripped-out racetrack specials.

Besides speed, new father Schaffer finds substance in EV tuning. "It's another level of meaning of life and work where we're not only doing fun stuff because it's fun but because it's important, as well," he said. "Once we realized that racing a Tesla is moving car culture toward a sustainable place, we could never go back. So it's only EVs for us because we get to enjoy our hobby in a way that's good for the future." That won't limit his team from making the fastest electric car they can make. Unplugged Performance is developing a Model 3 at Germany's Nürburgring to prepare future projects for the world's most demanding tracks.

Modification enthusiasts should lose concerns that electrification might stifle their possibilities. Whether their dream build rides sky high or slammed to the ground, motivation is the only thing that will stop them from achieving it—and we're not referring to what's under the hood.