Tesla Model S review: Still the king of the hill? 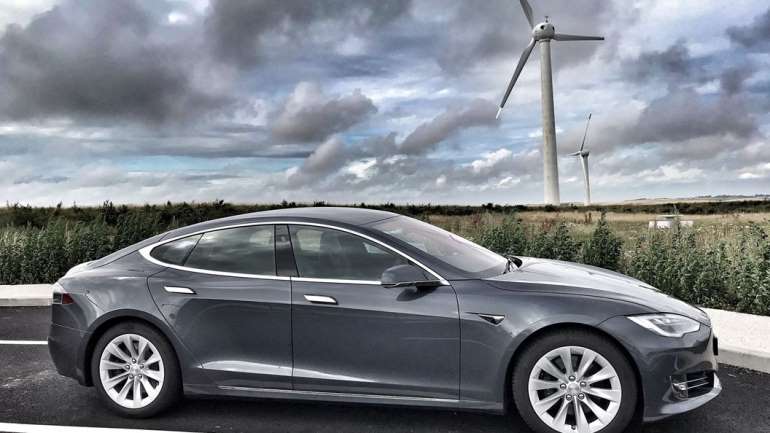 Such is the pace of change in Silicon Valley that it’s hard to keep up with the Tesla Model S. Not just in a straight line (the Long Range Plus hits 155mph after getting to 60mph in 3.7 seconds) and in the fast-changing electronics and user interfaces onboard (now updated every few months, wirelessly) - but also in the evolution of the model range itself.

Since its latest model update in 2019, there have been just two versions of the Tesla Model S range: Long Range Plus and Performance. Battery variations are no longer signified by the numbers as they used to be, and Tesla no longer quotes the battery capacity of its models anymore. Is it being coy? Of course not – just simplifying the customer journey for its iconic old stager EV.

Old stager? Yes! The Model S has been around in its basic form since 2014, and although it has been constantly updated, this elegant-looking five-door fastback is under increasing attack from the established premium players. But while they're launching their first offerings, Tesla's groundbreaking technology has evolved significantly. Closest in concept is the Porsche Taycan, which in entry-level 4S form comes very close to matching the Model S Long Range Plus in terms of power, performance and price. 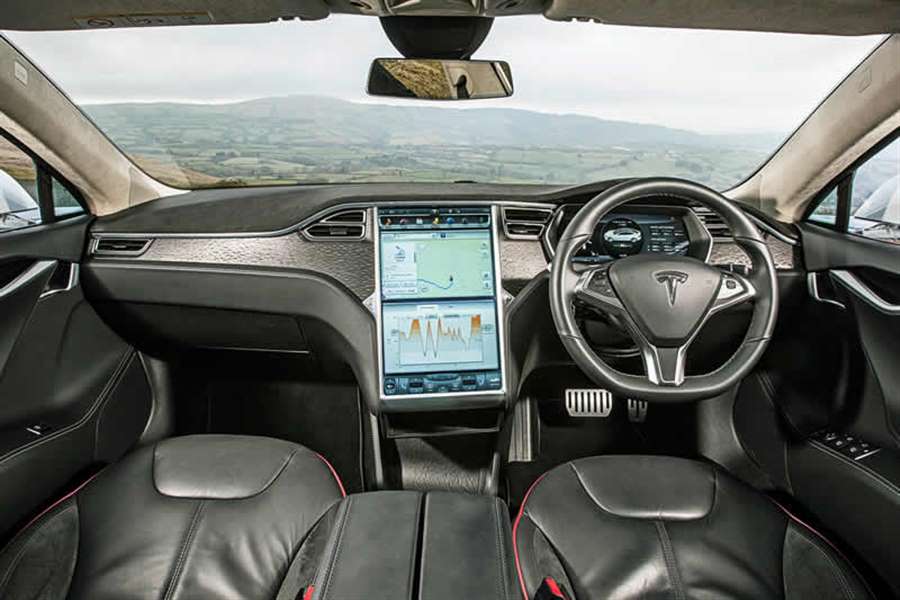 It’s a big car, at almost 5m long, 1963mm wide and 1435mm tall. No wonder there’s huge space front and back; just watch out for pinched headroom in the rear seats if you spec the sweeping panoramic sunroof. With no propshaft required, there is a totally flat floor though. The boot's a good size, although the 'frunk' under the bonnet is surprisingly smaller than a 911's. Open the large tailgate and you’ll find a 774-litre boot which can be extended by folding the back seats to reveal a cavernous 1645-litre capacity.

The cabin is incredibly spacious with a flat floor allowing easy and comfortable access to the middle seat in the rear. The light and airy interior is dominated by that huge 17.0-inch portrait-model infotainment screen which controls almost all of the Model S’s infotainment and ancillary features like climate control, seat heating and driving modes. Because the screen is so large and its operating system is so simple to use, this is one touchscreen that doesn't annoy.

For those who have yet to experience the Tesla Supercharger network, it's simplicity itself. You can charge it by three-pin plug (but who would?) or by Type 2, which typically gets you 23 to 68 miles of range per hour. But it's Supercharging that's Tesla's USP, and it's a joy to use, especially as it's free for life for Model S owners. And now with V3 Supercharging, which reduces charging times by an average of 50%. Tesla claims the new high-speed ultra-rapid chargers could add as much range as 1000 miles per hour.

This is still the only EV capable of trans-continental travel without serious prior planning.

Tesla Model S: How fast is it? 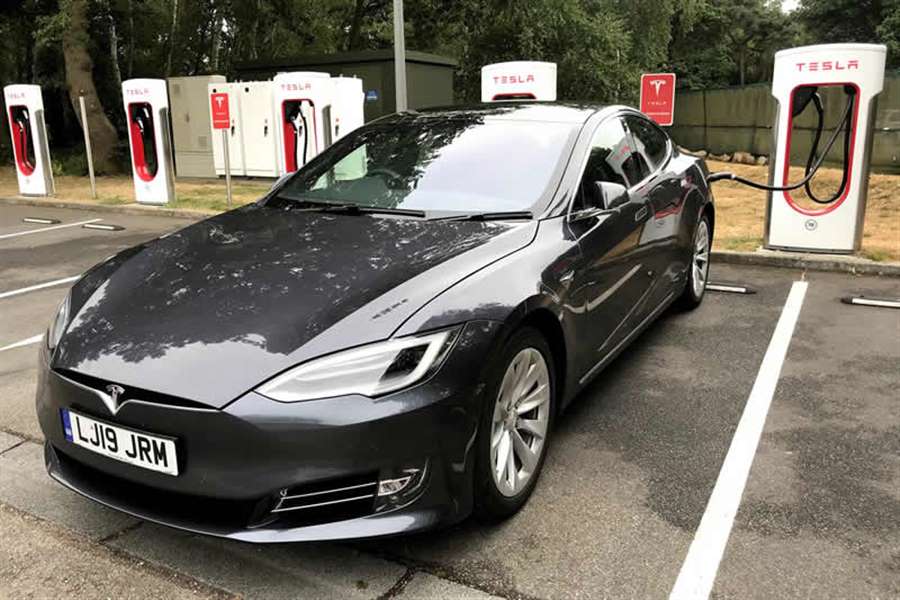 This car is quick, with a capital F. Tesla quotes a chunky 550bhp for the Long Range Plus and 615bhp for the Performance Ludicrous – both deliver supercar-baiting acceleration, pulling the four-door towards the horizon with all the inevitability of a silent, slightly eerie electric catapult. The Performance Ludicrous version is equipped with 4wd, it’s all drama-free and you’ll pass 60mph in 2.4sec – which is face-meltingly fast and lacking in drama.

Once you experience its stomach-churning thrust from rest, you'll crave to relive the experience – again and again. Of course, most Model S drivers wouldn’t condone such flat-footed antics. Not least because the claimed 396-mile range will freefall southwards if you drive like a hooligan.

Much better to ease off and surf the torque, preserving every precious mile. Driven like this, the indicated range is remarkably trustworthy and accurate in our experience – and we've driven them from one end of Europe to another.

Out of the two models, we prefer the firmer-sprung Performance model, which has what Tesla describes as ‘European’ handling, and we'd agree with that. Yes, it's on the large side to be slinging around like a sports car on British roads – but get it on the right slowing, well-surfaced, roads, it does feel like a decently set-up model sports saloon.

Body roll is kept to a is kept in check, its air suspension doesn’t crash and get unsettled over every rut in the road, and its steering is accurate and quick, if lacking in road feel – overall, an impressive for the company's first serious effort.

Both Model S models get air suspension which results in relatively supple, forgiving ride quality. It also allows the Tesla to adapt on the move, lowering at higher speeds bringing it closer to the ground and further benefiting handling. The suspension can also be lowered via controls on the touchscreen, as well as being raised to traverse rougher ground and higher than normal speed bumps.

Further elements that aid the quest of good handling for the Model S are the fact its heavy batteries are all located nice and low, helping give it a very low centre of gravity. Further, the weight balance is almost split 50/50 front and rear, making it a neutral handler.

Final word goes to Tesla Autopilot, which works well once you've been through a lengthy period of acclimatisation. It rewards hyper sensitive drivers and feather-light inputs – assisted lanchanges take practice and some faith in the software, while the adaptive cruise control is a little on the fidgety side. If this is another step towards autonomy, we're still not sure we're ready to make the leap yet.

The Model S continues to stun CAR’s testers. Sure, it's getting on, but it's still easy to recommend a Tesla Model S, despite the stern challenge from the beautifully-balanced, high-quality Porsche Taycan. Beyond The Model S's good looks, fabulous performance, and silky-smooth drivetrain, the lure of free Supercharging is almost irresistible.

It's interesting that even with new rivals appearing all the time, the Model S's appeal remains pretty much undented. The Tesla's combination of easy-to-use technology, Supercharger network and impressive range still place it ahead. Yes, you pay handsomely for the Model S if you option it up, but its entry-level isn't that far beyond the price of the a high-spec Audi A6 or BMW 5-series.

After all these years, it's still a gamechanger. The Model S has been largely responsible for consumers warming to the idea of an electric vehicle with so few compromises. It won't be long before the EV will be viable for most people – and you can thank the pioneering Model S for accelerating that process.