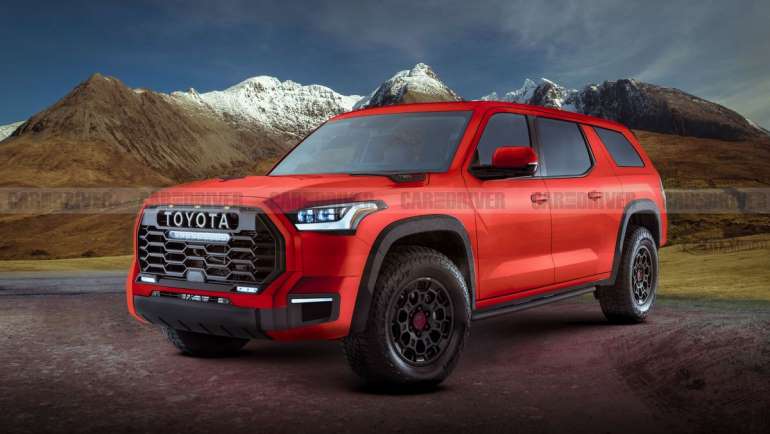 The Toyota Sequoia has always been a full-size, three-row SUV based on the same platform as the Tundra pickup truck, and that won’t change with the new generation set to arrive for the 2023 model year. The new model looks to be far more modern than the outdated second-generation Sequoia it replaces, which has been around for more than a decade. It should use the Tundra’s twin-turbo V-6 and is likely to offer the same iForce MAX hybrid powertrain as an option. Inside, we expect to see a large touchscreen with the latest software, along with a spacious cabin with space for up to eight passengers. This should all help the Sequoia be more competitive with rivals such as the Chevy Tahoe and Ford Expedition.

The Sequoia will be completely redesigned, closely following the changes made to the redone Tundra. It’s slated to debut later this year, as Toyota has already shown a teaser of the new model.

We expect the Sequoia to use the same twin-turbo 3.4-liter V-6 engine that’s standard equipment in the 2022 Tundra. It produces either 348 or 389 horsepower in nonhybrid versions of the truck, and there’s an iForce MAX hybrid version of this powertrain that ups output to 437 hp. The Tundra’s 10-speed automatic transmission should carry over to the Sequoia SUV as well. Rear-wheel drive will likely be standard, with four-wheel drive optional on most versions and standard on the off-road-oriented TRD Pro model.

The Sequoia’s large and spacious interior should continue to be its calling card, with a third row of seats as standard equipment. A second-row bench setup with eight-passenger capacity should be standard, with optional second-row captain’s chairs reducing the number of seats to seven. With a wide range of trim levels available, the interior trimmings will likely run the gamut from cloth to leather upholstery and varying levels of wood and chrome trim as you walk up the price ladder.

The old Sequoia’s dated touchscreen setup will likely be swapped out for the large 14.0-inch touchscreen found in the Tundra. This screen will use Toyota’s latest infotainment software that offers all manner of smartphone-mirroring and other connectivity options.