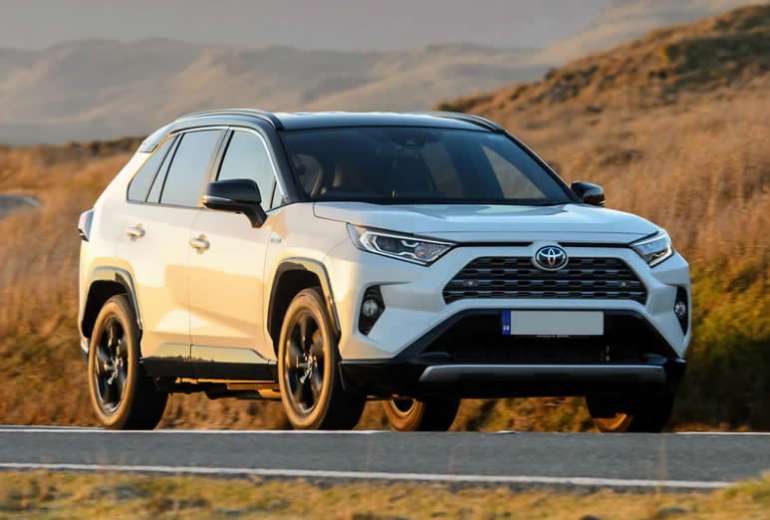 The Toyota RAV4 is a practical family SUV that has a roomy cabin, plenty of standard equipment and an economical hybrid system, but alternatives have tech that’s easier to use.

No one really thinks of the Toyota RAV4 as a trailblazer, but that’s what it is, because back in 1994 it was the first of the small ‘leisure SUVs’ that preceded the tsunami of such vehicles we see today.

One thing that hasn’t changed over the years is the fact that the RAV4 remains an affordable family SUV with a spacious cabin, a big boot and a clever hybrid system.

These days the RAV4 has a wide range of alternatives, such as the Honda CR-V and VW Tiguan, but in its latest form stands out from these cars thanks to its super-aggressive looks.

The Toyota RAV4 is a mishmash of creases, angular shapes and blunt surfaces whichever angle you approach from. Its gaping octagonal grille looks more like it belongs on a menacing sports saloon than a practical family runabout. You might like it, but your neighbour might not, or vice-versa. In any case, it’s certainly striking.

Sadly (or not, depending on your view) the Toyota RAV4 is less daring inside. It combines simple surfaces, clean lines and posh-looking metal-effect trims that look pretty understated and rather classy and most of the surfaces you’ll touch regularly feel plush and sturdy. It’s not quite as solid-feeling as a VW Tiguan, but it looks much more exciting than a Honda CR-V.

One area of improvement is the infotainment system, which now features Apple CarPlay and Android Auto. The system is much quicker to respond than systems of old.

The seats are very supportive; in mid-range models, you get lumbar support and plenty of electric adjustment that means even taller folk will find space to stretch out.

If you’re designated driver for a burly five-a-side football team then everyone will fit in just fine and even entry-level cars will allow you to recline the seat backs by a few degrees.

You won’t break a sweat fitting a child seat either – the Isofix points are easy to find – and a wide opening and flat floor means sliding things into the Toyota RAV4’s boot is an easy task.

There is more room than the boot in the Honda CR-V and, even though there are no levers in the boot to do so, you can flip the back seats down flat to carry really big stuff – such as a bike.

The simplicity extends to the engine range and driving experience, too. The only engine option is a hybrid system and this lets you cruise almost silently around town using just the power of its electric motor. You get an automatic gearbox as standard, too, which means you can cruise around town without constantly reaching for the gear lever.

The downside of the auto ‘box is that it makes the 2.5-litre petrol engine rev loudly every time you put your foot down. It’s reasonably quiet when you’re cruising at motorway speeds, though, and the RAV4 irons out bumps pretty well, too. As an added bonus, you shouldn’t have too much trouble getting close to Toyota’s top claimed fuel economy figure of 50.4mpg.

The relaxation stakes are further upped by the driver assistance features that make the Toyota RAV4 relaxing to drive for long periods and help prevent avoidable accidents – perfect if you’re looking for a safe family SUV that’s easy to live with every day. If you are after something that offers a touch of entertainment then the SEAT Ateca is more fun to drive, though.

By going hybrid the RAV4 has taken a few more small steps for mankind and if it sounds like your next car, take a look at the latest Toyota RAV4 deals or get offers from our favourite model – the hybrid model in Design spec – by clicking the button below.

The Toyota RAV4’s interior might be laid out in a simple and sensible style but it certainly looks more modern than the rather plain look of the VW Tiguan’s cabin. The Toyota gets swathes of soft, squidgy plastics across the dashboard and doors, and plenty of aluminium-effect trims on the steering wheel, door handles and around the air vents.

The infotainment display is a freestanding affair that sits high up on the dashboard rather than built-in lower down so it’s easy to glance at while you’re driving. It manages to look rather more integrated than other similarly high-riding screens (like the one on the Ford Kuga for example) thanks to some surrounding chrome trim that extends down onto the lower part of the dash.

The cabin features a few hard, brittle plastics – most notably on the grab handles, around the glovebox and below the central armrest – but, generally speaking, the RAV4’s cabin feels pretty plush and suitably solid. The chunky air conditioning knobs are easy to use too, but the heated seat switches are tucked away under the dashboard.

Icon and Design models get black cloth seats while Excel versions get black leather seats and suede-like Alcantara door trims. Top-level Dynamic cars get a faux-leather seat covering with contrasting blue stitching but there is a variety of different leather colour options available on all the trims.

Every Toyota RAV4 comes with an 8-inch touchscreen infotainment system as standard, although what that system can do differs depending on which model you go for.

Regardless, the screen is bright and relatively easy to read in direct sunlight, but it isn’t as sharp as the screen you get in a VW Tiguan and isn’t as easy to use quickly while on the move.

The array of physical shortcut buttons are a bonus, though, and they will help you switch between the features you’ll use most often. There are also two easily reached physical dials for the stereo volume and radio tuning.

Turn attention back to the screen and the home menu is very difficult to decipher. It displays a window for the sat-nav, one for the stereo and a third showing you the status of the hybrid system, but they’re so jumbled together you’ll have real trouble reading them or following directions.

If you want the aforementioned satellite navigation then you get it as standard so long as you avoid the entry-level Icon model. It’s relatively easy to pop in an address and add a waypoint, but the maps themselves aren’t particularly clear.

Sure, the graphics are nice and bright, but the system defaults to a very wide zoom which makes spotting upcoming turns rather tricky. You can zoom in manually, but only using the on-screen buttons. Using a pinching motion, which you would on a smartphone, means that the map stops following your progress and stays in a fixed position.

However, if you would rather use one of the navigation apps on your phone then you get Apple CarPlay and Android Auto as standard on all models. You can also use the standard Bluetooth connection to play music from your phone through the car’s stereo, or there’s an aux-in socket if you want to link up using a cable.

Speaking of stereos, you get a fairly nondescript six-speaker system as standard but Excel and Dynamic cars come with the option of an upgraded nine-speaker JBL unit with subwoofer in the boot to deliver clearer, punchier bass notes. It certainly sounds better, but alternatives come with even more impressive stereo upgrades.

Tagged under
More in this category: « Our 2020 Toyota Supra 3.0 Wows Wherever It Goes (PHOTOS) 2021 Toyota Camry XLE Hybrid Fixes Some Minor Flaws »