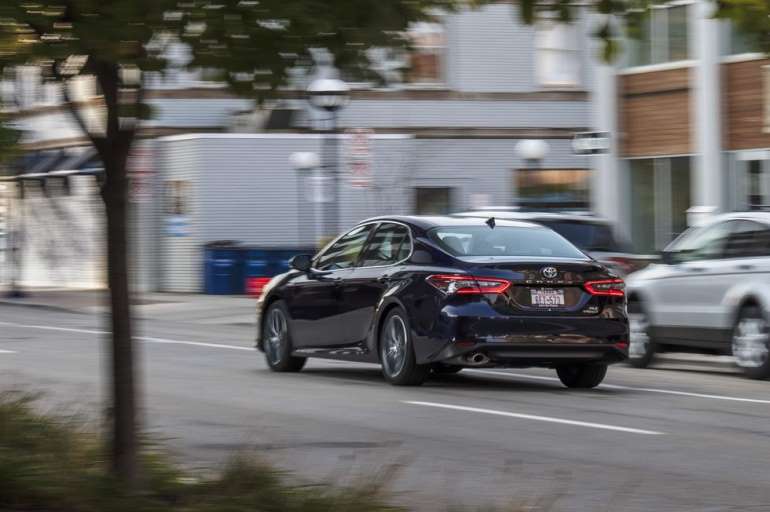 While it still won't raise your blood pressure, the new Camry has a fresh face, an updated infotainment system, and a lower price.

Unlike the rest of the Toyota Camry lineup, which purports to be infused with sportiness, the 2021 Toyota Camry XLE hybrid is a sedan after more traditional Camry traits such as a supple ride, impressive fuel economy, and a handsome interior. The updates to the hybrid are focused on areas that either needed attention or, in the case of last year's front-end design, less attention.

That new front fascia swaps out the old snowplow-like lower grille with a less-in-your-face design. The look is sleeker and more mature and attractive than before. Inside, the Camry swaps out hard plastic for the soft-touch kind on the door panels. There's a choice of two new more touch-responsive screens. Measuring 7.0 or 9.0 inches, each offers volume and tuning knobs flanking either side of the screen, like an old radio. Upgrading to the larger touchscreen with navigation, Apple Car Play, Android Auto, and the nine-speaker JBL audio system is definitely recommended, even with the $1,760 price. Despite switching to a new layout, a larger screen, and a better organized menu structure, much of the old infotainment system lingers behind with outdated graphics and clunky software that isn't as intuitive and easy to use as competitors. The Camry faithful may notice that the XLE has a slick new herringbone pattern on the leather seats.

Powering the most fuel-frugal Camry is the same Atkinson-cycle 2.5-liter inline-four and electric motor combination as before. The two power systems put out a combined 208 horsepower to the front wheels. While acceleration around town is adequate, it's not the same story at higher speeds. When pressed into duty in a passing maneuver or sustained acceleration, the powertrain emits an unpleasantly gritty engine note during passing maneuvers. Toyota's 2.5-liter four is a bit loud, a trait made more apparent by the continuously variable automatic transmission's propensity to keep the engine at one rpm.

The powertrain does transition smoothly from electric to gas and electric, and the ride is soft and quiet. EPA ratings remain where they were last year: 46 mpg combined, 44 mpg city, and 47 mpg highway. Buyers who might have skipped the hybrid last year because of its lack of sportiness might be interested in the first-ever Camry XSE hybrid, which promises to combine the sporting looks of the XSE with the fuel economy of the hybrid.

Our fully loaded Camry hybrid XLE exists at the top of the Camry food chain with a price of $33,165. Surprisingly, that price is $560 less than it was for 2020. Compare base prices, and the hybrid Camry is a big $3000 or so less than the Honda Accord hybrid and the Hyundai Sonata hybrid. Even with every available option, the Camry is only about $1,500 more than the base Accord and Sonata hybrids. The Camry hybrid is apparently about more than saving gas, it's about saving money and saving face.