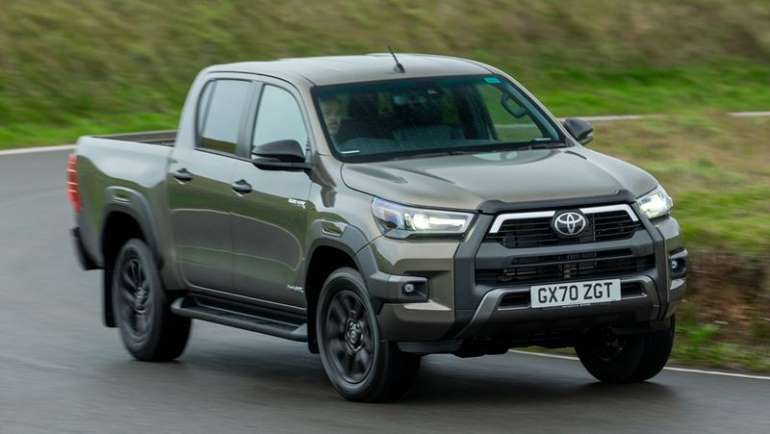 The Toyota Hilux pick-up has been updated for 2021, and now boasts a punchy 2.8-litre diesel engine

The Toyota Hilux has always been seen as a practical, no-nonsense work vehicle, and the latest updates mean it should be on any premium pick-up truck buyer's shortlist. The new engine packs a punch without impacting running costs too severely, while the Invincible X model has the looks and kit to appeal to buyers that need an upmarket work vehicle that also can carry a family in comfort - all while offering more off-road ability than most buyers could possibly need. 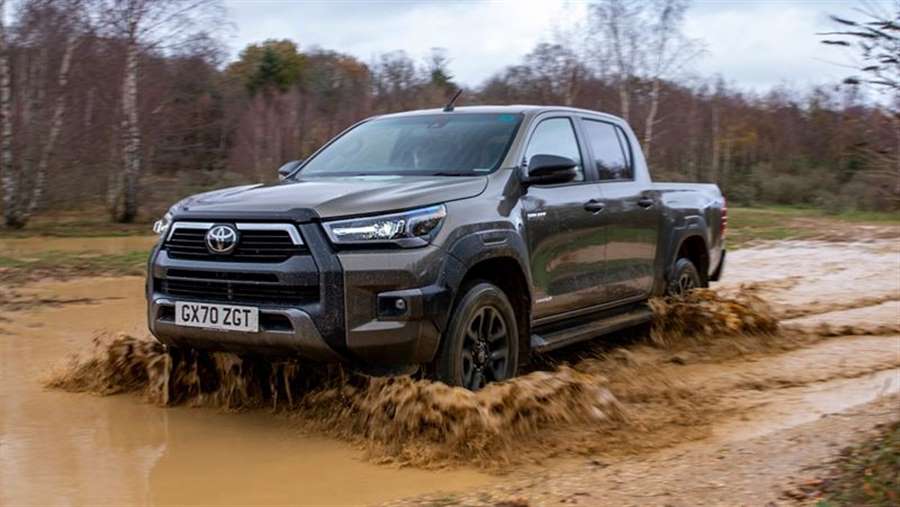 Of all the pick-up trucks for sale in the UK, the Toyota Hilux is the one with a reputation that precedes it. It's become a beacon for Toyota's reputation for reliability and durability, and is found in all four corners of the globe. However, when it comes to the 'lifestyle' angle of the UK's one-tonne pick-up class, it has never quite hit the mark.

One thing that's held the Hilux back is a relative lack of power. Unlike rivals, Toyota has never offered the Hilux in the UK with a high-power engine, but that's all change for the 2021 model year, with the arrival of a new 2.8-litre diesel packing 201bhp. That means the Hilux is now second only to the Ford Ranger in the four-cylinder pick-up pack for power. It's available with six-speed manual or auto gearboxes, while selectable four-wheel drive and low-range gears make the most of that power and the 500Nm of torque on offer. An automatic limited-slip diff in 2WD mode also helps with traction when running in the Hilux's most efficient setting. 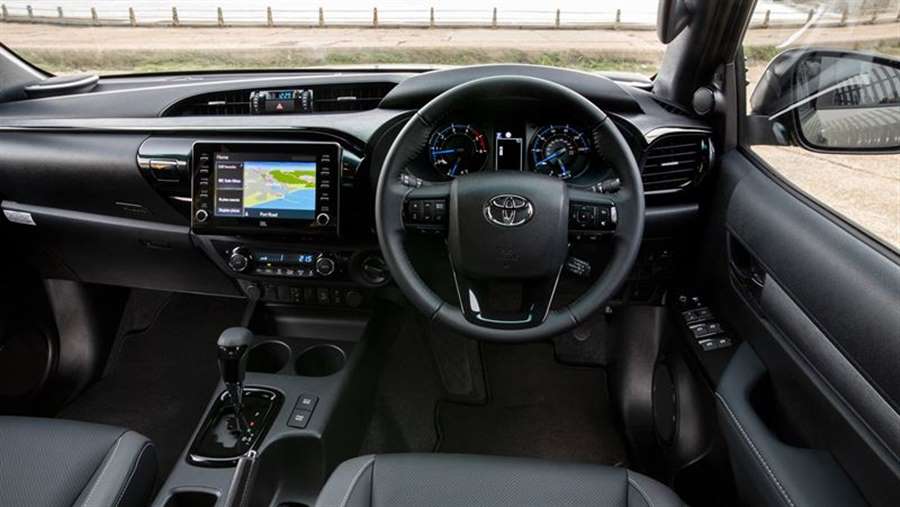 Other revisions under the skin include suspension that has been tuned to deliver a smoother ride when unladen, helping to reduce the amount of bounce that one-tonne pick-ups often suffer from when there's no payload in the back. Also, the power steering now offers variable assistance depending on which drive mode is selected, with extra assistance given in low-range mode for off-road driving.

On the road, the Hilux has definitely been improved. The engine can still get noisy under acceleration – especially if you use the whole rev range – but the extra power means you don't spend as much time on the throttle as before. That automatic LSD function helps get the power to the road in 2WD mode with minimal fuss, too. When you do back off, the cabin is quiet and refined, with next to no wind or tyre noise. It's a real step change for the Hilux, and means this truck now offers the kind of hushed cruising that you'd get from an SUV. 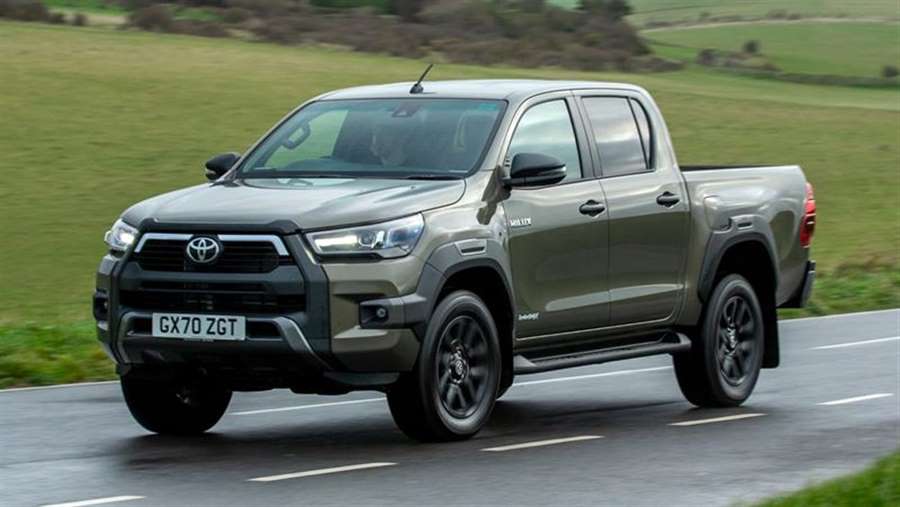 However, while the revised suspension is designed to help eliminate 'bounce', the Hilux isn't automatically a smoother ride than a Ford Ranger. There's a distinct patter sensation when running over bumps, with the front and rear wheels delivering a similar amount of movement back to the cab. In comparison, a Ranger's front suspension will smooth out a bump, but with the rear having a bit more of a jolt to it. Overall it means that the Ranger feels like it offers a better compromise than the Hilux when unladen. Still, the Toyota is a better performer than the Mitsubishi L200, while the leaf spring set-up is more composed than the multilink system found on the Nissan Navara.

What really impresses is that Toyota has managed to improve the Hilux on tarmac without compromising its off-road talents. Even on standard road-biased tyres, the Hilux offers a level of ability in the rough that will meet the demands of almost all drivers. Simply switch to the low-range 4WD setting, and a suite of electronic aids will help you battle through the rough stuff. Hill descent control, a reprogrammed stability control system, improved throttle response and a lower engine idle speed mean the Hilux is better suited to off-road driving than ever. 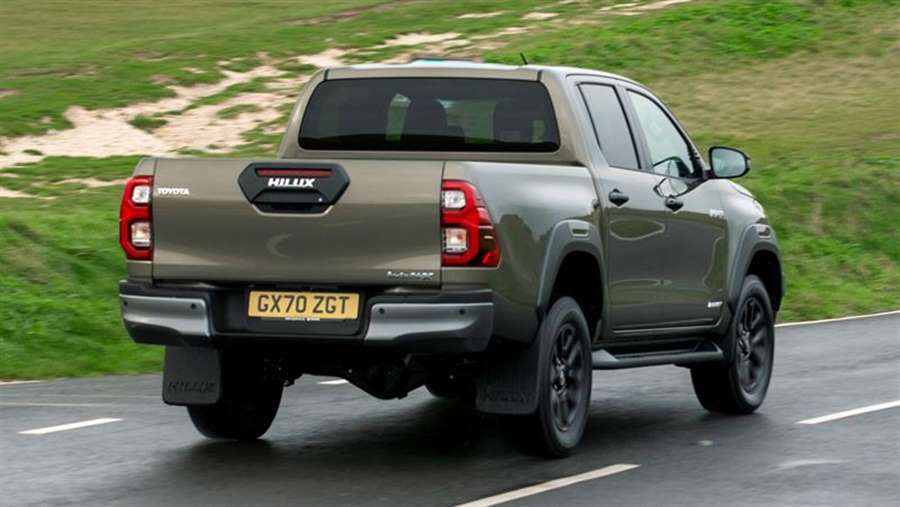 Go for the top-spec Invincible X model, and the 201bhp diesel is standard (the 2.8 is optional in Invincible trim, while lower-spec models come with the existing 148bhp 2.4-litre diesel), and there's a long list of extras, too. The X gets a unique exterior look, with minimal chrome trim, black cladding for the grille, wheelarches and tailgate, plus exclusive 18-inch wheels and black chrome housings for the standard LED headlights.

Inside, a JBL audio system delivers excellent sound clarity - although the dashtop speakers do reflect slightly in the windscreen - and sat-nav is included with the infotainment, although the new eight-inch touchscreen also introduces Apple CarPlay and Android Auto to the Hilux if that's your preference. There are heated leather seats up front, ambient lighting throughout the cabin and everything feels well built. Maybe it's not quite as plush as an SUV, but you certainly don't feel short-changed. 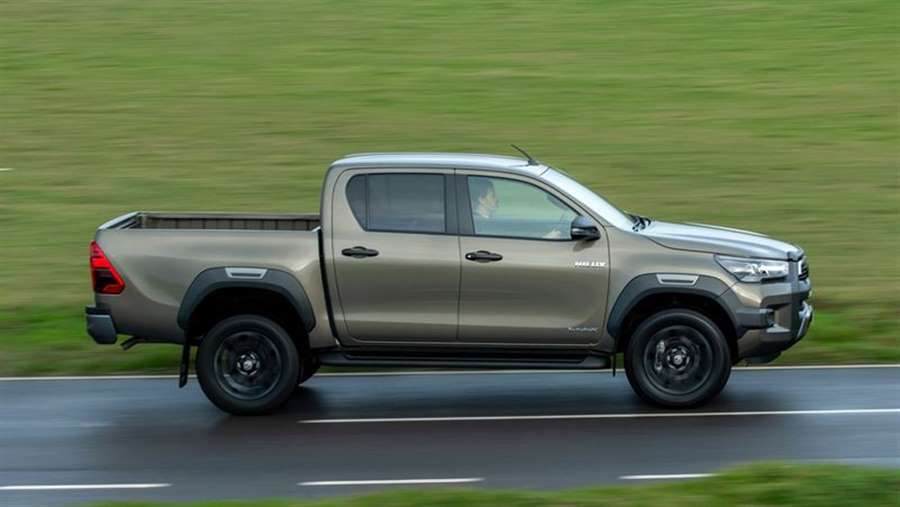