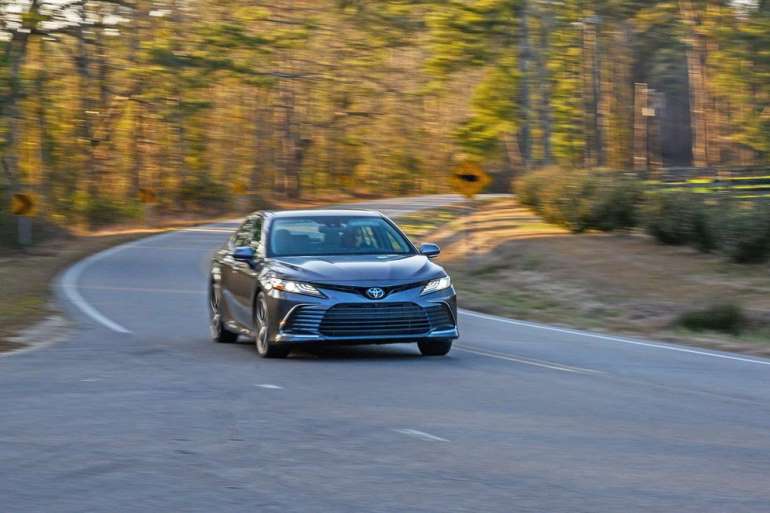 Introduced halfway through the 2020 model year, the Toyota Camry's all-wheel-drive option makes a return after a 29-year hiatus.

The late 1980s were a halcyon era for all-wheel-drive cars. Mitsubishi made all-wheel-drive Galants, Honda had the Civic Real Time 4WD, Pontiac introduced the 6000 STE AWD, and Ford offered an all-wheel-drive Tempo. The period gave us various AWD Subarus and Audis, the BMW 325xi, and Mercedes-Benz's 4Matic system. Toyota even built an all-wheel-drive Camry, the All-Trac, from 1988 to 1991. Then the SUV craze took off, everyone bought a Ford Explorer, and all-wheel-drive cars went back to being freaky things for rally-racing fans and rich Vermonters. 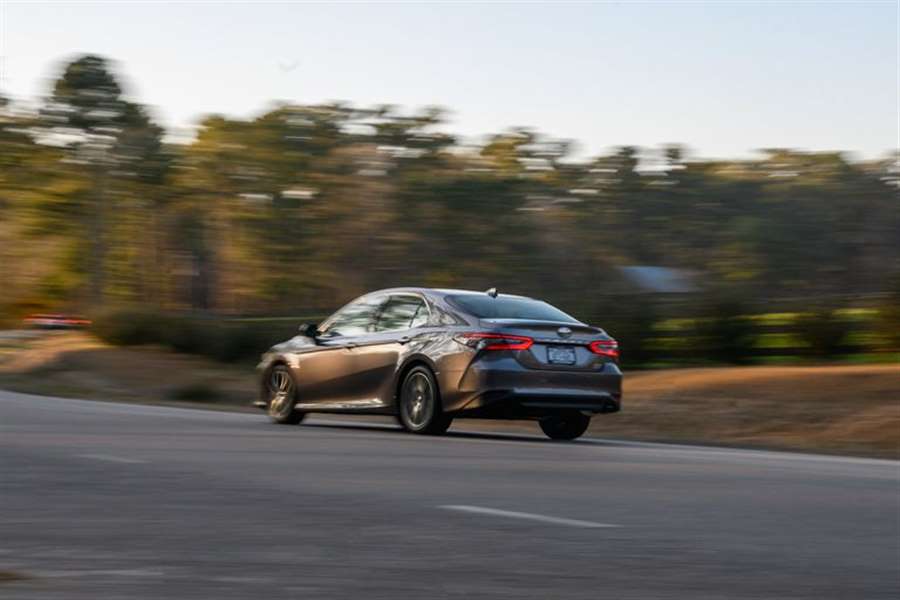 Okay, we're oversimplifying. But if SUVs and crossovers killed the mainstream all-wheel-drive sedan, we can also argue that they're the proximate cause of its current minor renaissance, since carmakers want to give their sedans a fighting chance in showrooms bursting with new utility vehicles. So, Toyota's AWD Camry has returned, this time less because of direct all-wheel-drive competition (Subaru Legacy, Nissan Altima) than to fight the more general adversary known as "all crossovers."

Toyota introduced all-wheel drive as a midyear addition to the 2020 Camry lineup, and it went into production at the company's factory in Kentucky last March. Considering what else was ramping up last March, you'll be forgiven for missing that news. Toyota figures 15 percent of Camry buyers will choose the all-wheel-drive option—which is limited to the North American market—but we predict that only a tiny subset of those will add their own All-Trac badges. That's too bad. As it stands, a subtle AWD emblem on the trunk is the only giveaway that your Camry is packing more than one differential. 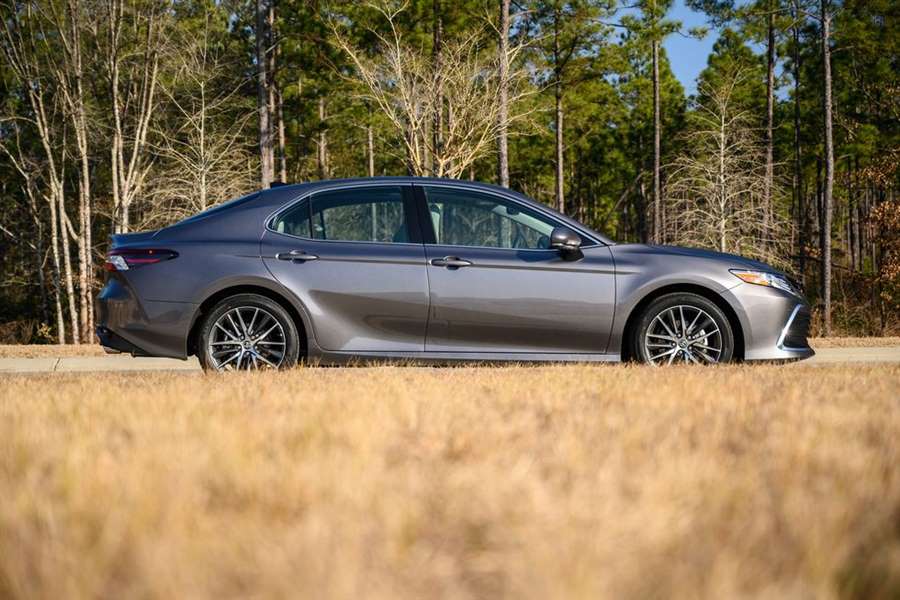 Unless, that is, you jack up the car, which we did to take a peek at that rear diff. The complete system adds roughly a claimed 165 pounds yet makes no impingement on trunk space. The rear seats lose 0.4 inch of headroom, and overall passenger volume declines by less than a cubic foot, both of which are metrics that fall under the heading of "not so you'd notice." Oddly, all-wheel-drive Camrys have a wider turning circle (39.3 feet versus 38.0 for front-drivers) because of a slightly wider rear track and different suspension geometry.

The rear-axle hardware also crowds the exhaust system a bit, resulting in the all-wheel-drive models making one horsepower fewer than their front-drive siblings. We suspect that, in a drag race, the weight penalty will make a bigger difference than the single-pony deficit. 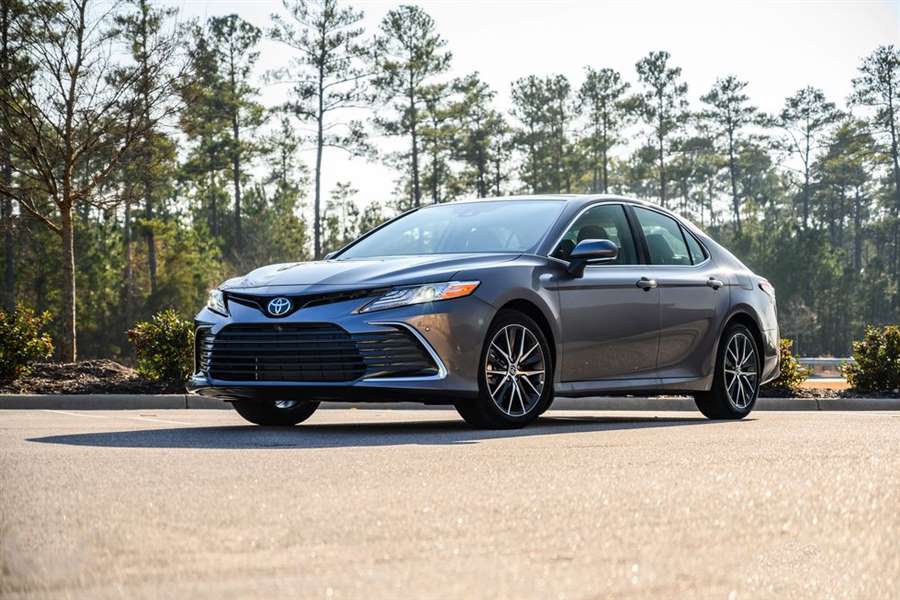 Indeed, the Camry's AWD option is available on every four-cylinder trim level, including the sportier XSE. It's not available with the optional V-6 or hybrid powertrains, presumably because if that's what you're after, Toyota would rather sell you a RAV4 or a Highlander. The naturally aspirated 2.5-liter four is reasonably powerful—202 horsepower in most trims, 205 in the XSE, which has dual exhaust outlets—if rather coarse at high rpm. At least it's hooked to an eight-speed automatic transmission, as opposed to the continuously variable transmissions found in the Camry's competitors from Nissan and Subaru. Decisive upshifts and quick downshifts add some satisfaction to the AWD Camry driving experience, although the word "fun" doesn't quite apply. A TRD hot rod this is not.

In fact, in normal operation, the all-wheel-drive Camry behaves like a front-drive model with some junk under the trunk, disengaging the rear axle via an electromagnetic coupling. When the front wheels slip (or when accelerating from a stop) the rear end shows up for work, deploying a maximum of 50 percent of the engine's available torque to the back. We didn't get a chance to test the system in snow, but on dirt the Camry hooked up and launched after a momentary hint of wheelspin from the front. Traction overrules horsepower, quickly and decisively, which is the point. This wouldn't be a great car for spinning donuts in an empty parking lot, but it should excel on sloppy winter roads. 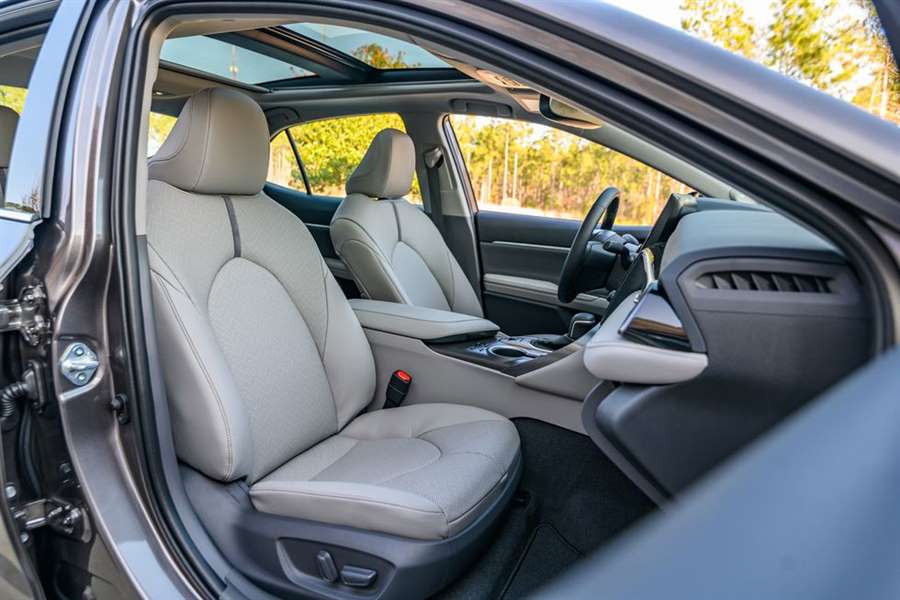 And it's a good buy. At $1400, the all-wheel-drive option doesn't cost much more than a nice set of mounted winter tires. It does exact an ongoing penalty in running costs, though, since the added weight and drag of the system drops the Camry's EPA combined estimate by 3 mpg versus comparable front-wheel-drive models. For the XLE example we drove, the EPA highway rating fell from 38 to 34 mpg, despite the Camry's ability to disconnect its rear axle. Given that Toyota stole some packaging space for the all-wheel-drive system by fitting a smaller fuel tank (14.4 gallons, down from 15.8), the Camry AWD will be visiting gas stations considerably more frequently than its front-drive counterpart.

Taken together, this amounts to a bunch of small drawbacks that you'd forget all about the moment you power up a steep hill in six inches of powder. If that's something you ever need to do in a family sedan, maybe take some inspiration from the all-weather cars of the '80s. You can't buy a new Pontiac 6000 STE, but the all-wheel-drive Toyota Camry is back.