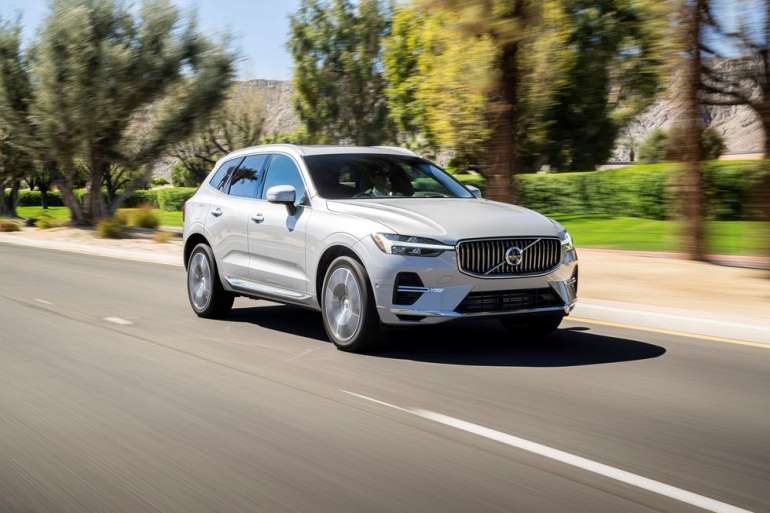 One of the distinct advantages of the auto industry's current moment of record profitability is the ability it gives carmakers to invest in truly worthwhile upgrades during mid-cycle refreshes. Witness Volvo's plug-in hybrids, specifically the latest version of the XC60 Recharge T8 Extended Range. Like its XC90 big brother and the company's refreshed S60, V60, and S90 hybrids, it sports a new-for-'22 powertrain that extracts more power from its electric motor, revised to loft its lusty (and also freshly tweaked) supercharged and turbocharged 2.0-liter four-cylinder to new heights, with additional battery cells delivering greater all-electric range. 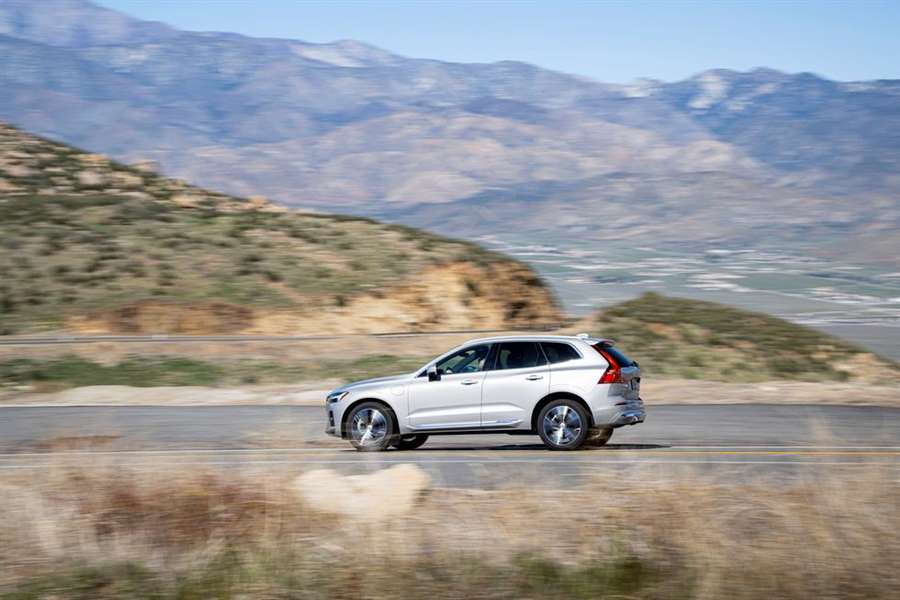 Thanks to a new, third layer of cells, the T8 battery pack's capacity jumps from 9.1 kWh to 14.9, increasing its range in all-electric operation—what Volvo calls "Pure" mode—to 36 miles, up from 19, a not insignificant improvement. Volvo research suggests that customers spend fully half their time in all-electric mode. For those with charging capability at home or at work, Volvo proposes, most daily driving can be tackled in the new model on electric power alone. As a further benefit, buyers qualify for the federal government's full $7500 tax credit, as against the $5419 available for buyers of its predecessors with their skimpier range.

Revisions to the powertrain see its output skyrocket 55 horsepower to a whopping 455 total horsepower, with the upgraded electric motor chipping in 143 of those to go along with the 313 ponies that come courtesy of the tweaked gasoline mill. Up substantially from the outgoing model's 87 horsepower, electric motive force gets directed to the rear wheels, while the gas engine takes care of the fronts. With this much horsepower and a Brobdingnagian 523 pound-feet of torque, the refreshed mid-size SUV stands with its aforementioned brethren as the most powerful cars Volvo has ever brought to market. Such is the promise and pleasure of electrification.

With an EPA-estimated 63 MPGe, the economy potential is infeasibly high. In a random sampling of roads at a launch event in and around Palm Springs, California, helpless to resist the siren call of its massive power, we still managed to eke out a still creditable indicated average of 45 MPGe. 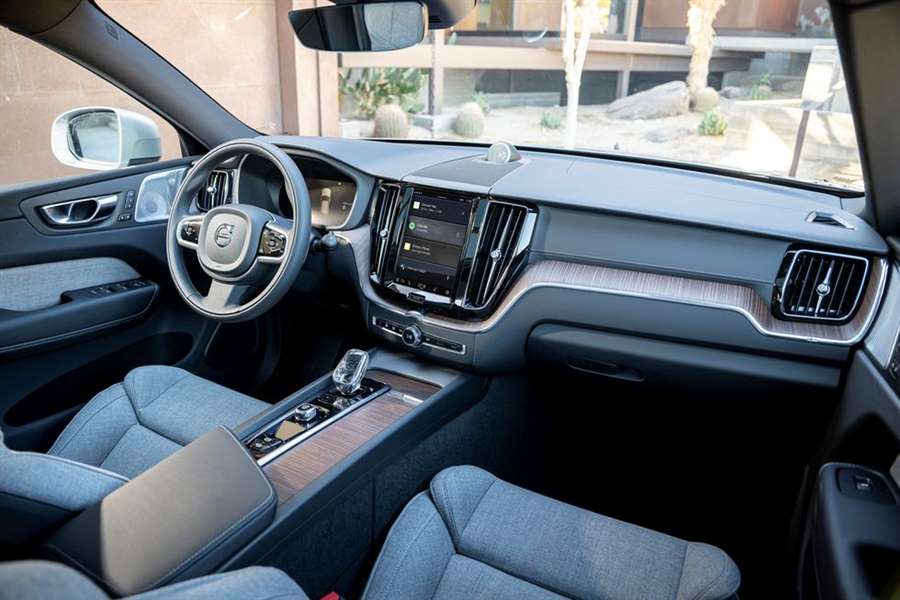 Volvo cites a 4.5-second 60-mph sprint for the Recharge T8 Extended Range (shaving half a second off the old model's best effort), and performance with both powerplants firing is predictably sparkling. As well it ought to be with that much torque to call on, even allowing for the XC60 hybrid's borderline portly claimed 4758-pound curb weight. But despite the extra juice, the power glut is not obtrusive as the vehicle's two diverse and generally harmonious powertrains got down to it, save a one-time, mild clunk from the rear. In Pure electric mode, pickup remained acceptably brisk but not neck-snapping.

One-pedal driving—where regenerative braking causes the car to slow when the driver lifts off the accelerator without applying the brakes—is a new and much appreciated feature for the hybrid model, one that was previously seen only on the firm's EV offerings. Those who've not experienced it will quickly get the hang of one-pedal operation and, in our experience, quickly grow to enjoy it, slowing down with a counterintuitive smoothness that quickly becomes second nature. Use of the feature is selected by double-clicking the gearshift into Drive after selecting the Pure driving mode on the central screen. It proved unexpectedly addictive while charging up this sure-footed chassis, then rapidly descending, winding mountain roads. 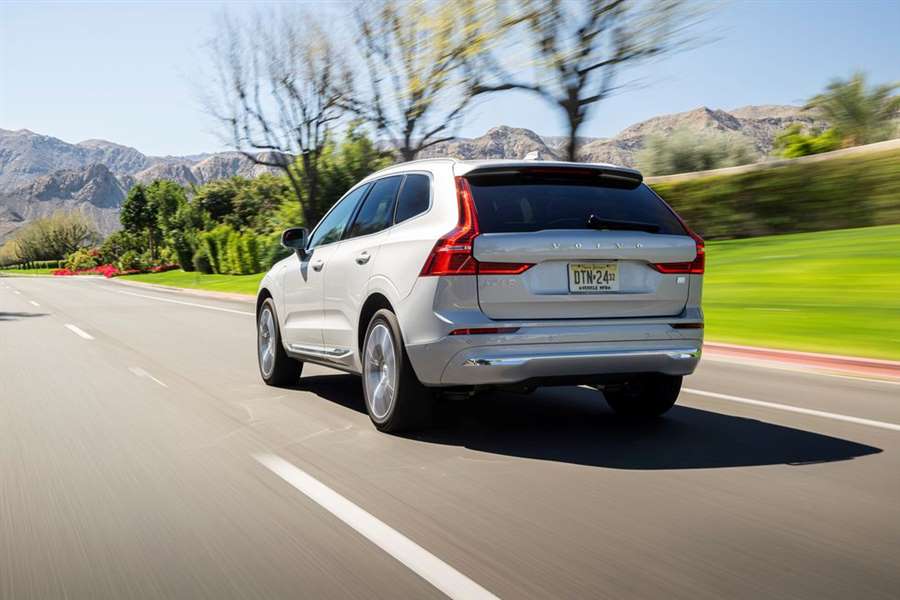 External updates are subtle for this refreshed and still quite handsome model, with a new grille and rear bumper its most noticeable external changes. Prices start at $55,845, so the XC60 Recharge T8 Extended Range is not cheap, though, in an era of rising car prices, surely reasonable. Nor is it as expensive as it feels, with quality fittings and distinctly good looks that amount to extraordinary style in an era where cheap plastics dominate and, with few exceptions, SUVs tend to toggle between ugly and boring. This XC60 Recharge is neither, and its revised, ultra-modern dash and uniquely stylish interior design help make it legitimate competition for models costing far more. Particularly appealing was our sample's fabric seating, a wool blend (available only in gray) that promises to be comfortable in extreme weather both hot and cold.

All in all, the XC60 Recharge T8 Extended Range provides proof that in car manufacture as in life, having the money to up one's game is preferable to not.