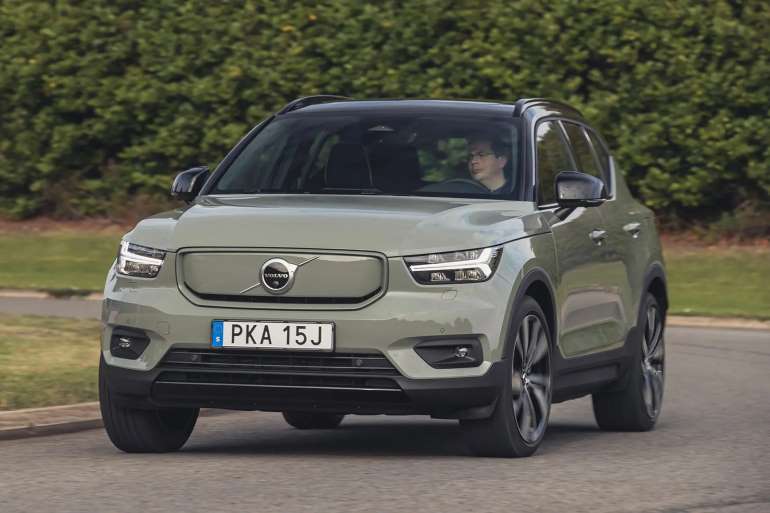 The pure-electric Volvo XC40 Recharge bolsters the SUV’s already widely electrified model range. On top of the EV, you have a choice of mild-hybrid petrol engines and a two plug-in hybrids – but we reckon the fully electric version is the pick of the line-up.

Volvo introduced the electric XC40 in 2019 and, because it was destined for launch when the car was still on the drawing board, it doesn’t make any comfort or practicality sacrifices by making the switch to battery power. 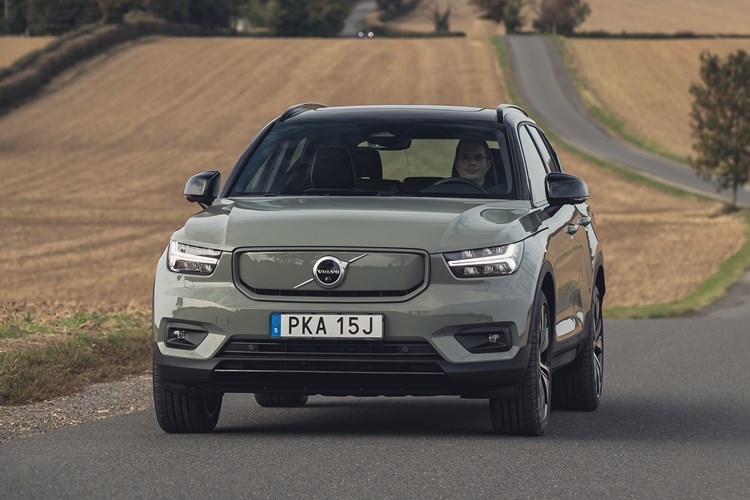 You have a choice of two electric powertrains. The entry-level front-wheel drive model has a 69kWh battery pack and a single electric motor with 231hp and 330Nm of torque. Volvo says it can sprint from 0–62mph in 7.4 seconds and that it’s capable of covering up to 264 miles on a charge.

There’s also a more expensive dual-motor, four-wheel drive option called the Recharge Twin. This model gets a larger 78kWh battery pack and an extra electric motor on the rear axle, bumping its power and torque figures up to 408hp and 660Nm respectively.

The extra grunt also slashes its 0–62mph time down to a hot hatchback-troubling 4.9 seconds, while the added battery capacity increases its maximum range to 270 miles. What’s more, both versions of the pure-electric XC40 offer support for 150kW DC rapid charging, allowing both to charge from 10–80% capacity in around half an hour.

The list of rivals for the Volvo XC40 Recharge has grown since it was launched. Now, buyers can choose from the likes of the Mercedes EQA, BMW iX3, Ford Mustang Mach-E and the latest Kia Niro EV. The question is: can the aging XC40 EV still compete in this class of newcomers?

Well-made and easy to use. You get a 12.3-inch digital gauge cluster and a 9.0-inch portrait infotainment system. Both look great and work well – their graphics are sharp, and the central screen runs on Google software which loads quickly and has built-in support for Google Maps.

The climate controls are operated through the central screen, which we’re normally not huge fans of. However, Volvo has designed a permanent toolbar for the lower edge of the display which means you don’t need to dig through a load of submenus to adjust the air conditioning. 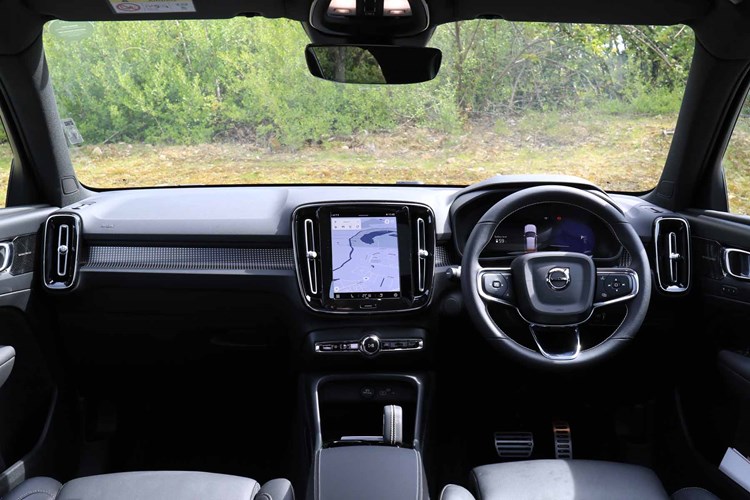 Volvo has also fitted the XC40 with voice control and pushed as many functions as possible through the system to minimise the amount of time you spend with your eyes off the road. You can program sat-nav instructions, change the cabin temperature and ask it to read your messages for you. It works well for the most part – but you can trip the system up if you have a regional accent.

Because there’s no engine up front, you also get some extra storage space under the bonnet. It only measures 31 litres, but that’s just enough space to hide the storage cables. It’s particularly useful if you’re taking the electric XC40 on a long family trip, as it means you don’t have to unpack the boot to fish the cable out from the hidden storage space under the boot board.

The build quality is impressive, too. It’s a match for any of its German rivals, with tight shut lines and soft-touch materials everywhere within your wingspan. Refinement is good, too – there isn’t much wind noise, and the sound deadening is thick enough to keep tyre roar to a minimum. That’s especially important given there’s no engine noise to drown out the road noise. 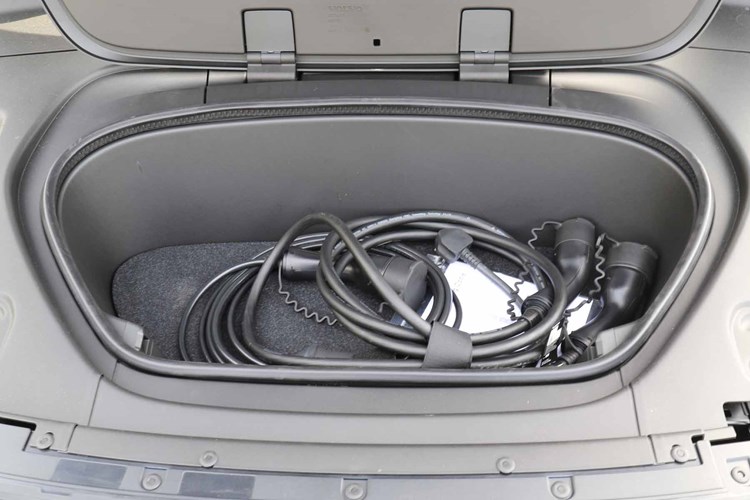 If you want to know more about the Volvo XC40’s interior space, quality, comfort and infotainment technology, follow this link to read our main review of the car.

The XC40’s seats are great. The front seats have loads of adjustment and clever fatigue-mitigating extras like an extendable thigh support and a thick inflatable lumbar support cushion. Both hold you in place well and stop you from slouching. The seats are well-sprung too, striking a keen balance between bracing and plushness, meaning you won’t feel tired after a long stint behind the wheel.

The rear seats are equally welcoming. They’re a good shape with plenty of padding for your lower back, which should prevent those in the rear from curling up into the shrimp position halfway through a road trip. There’s also a lot of legroom and a surprising amount of headroom – even with the panoramic sunroof fitted to the range-topping Ultimate model. 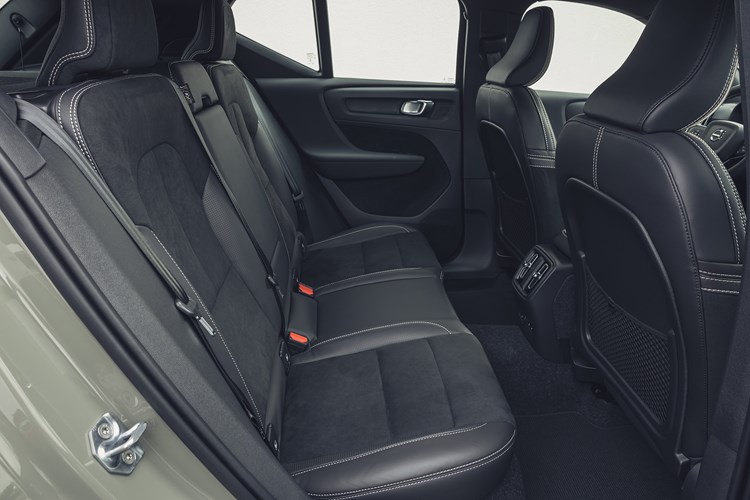 There are lots of storage bins dotted around the cabin, too, which help to keep it looking tidy even when they’re holding all the items required for family life. There’s a deep storage bin under the front central armrest, a wide wireless smartphone charging pad in the centre console and door bins that are large enough to swallow laptops, tablets and litre-sized water bottles.

Safety has always been Volvo’s strongest suit – and the XC40 is no exception. Euro NCAP awarded the petrol-powered version of the car a five-star rating back in 2018, and this score was also applied to the electric model in 2021. It’s worth bearing in mind that Euro NCAP has since tightened up its scoring system, but the XC40 remains a very safe way of transporting your family around.

The testers were particularly impressed with the XC40’s passenger protection ability. The car achieved a 97% score for adult occupants and an 87% score for child occupants – and the child dummies emerged from the wreckage with no major injuries. 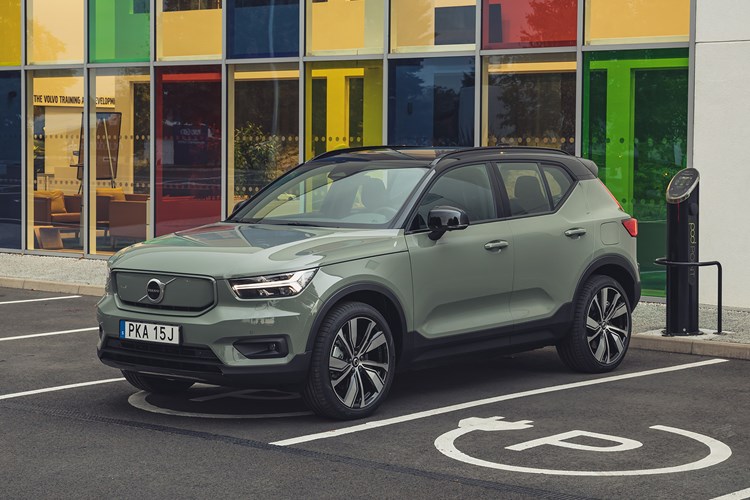 The XC40’s success can be partly attributed to its arsenal of airbags. In addition to the usual front airbags, you get a driver’s knee airbag and a full-length side curtain airbag to protect passengers’ heads, chest and pelvis. There’s also an automatic belt pretensioner which will pull occupants into their seats if the car recognises an imminent accident.

We found this latter system can be a little too eager to engage. For example, if you go around a corner or over a crest a little faster than the computer would like, the seat belt will choke-slam you into the backrest. But we’d rather it errs on the side of caution than not work when you need it.

Agreeably pleasant, but it won’t set your trousers on fire. The range-topping 408hp Recharge Twin model is the most powerful and fastest-accelerating XC40 on sale, but it’s also the heaviest – and that makes it quite reluctant to corner with haste.

Push the car hard into a bend and Volvo’s torrent of safety features will come down on you like an anvil. The laws of physics aren’t on your side, either – the XC40 Recharge’s 2,188kg kerbweight is quite high for compact family SUV which makes the car feel a little ungainly. At least the mass is concentrated down low, which minimises the harm by dropping the car’s centre of gravity.

The front-wheel drive model is slightly nimbler as its battery is smaller and it doesn’t have the added weight of an extra electric motor over the rear axle. It still isn’t comfortable belting down a B-road at speed, though. Despite this, it’s quite refreshing to have a car that’s unashamedly geared towards comfort in a class of supposedly “sporty” rivals. 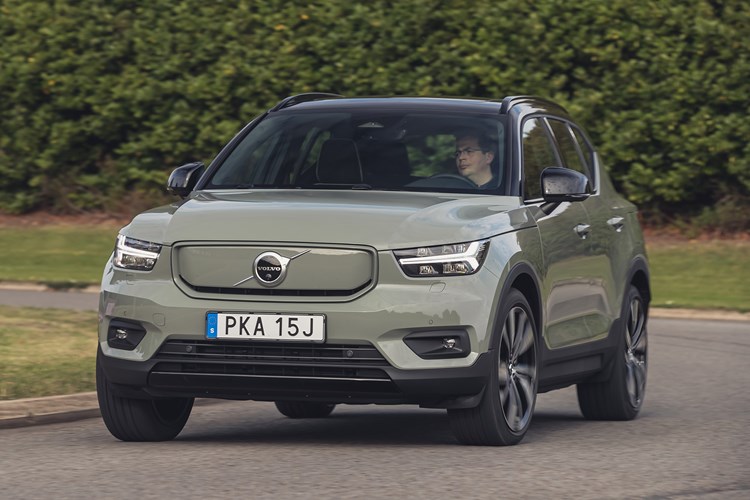 The suspension is supple and the chassis doesn’t crash over bumps, even with the car’s rather large standard 19-inch alloy wheels. Potholes are more noticeable around town, but the jolts they produce aren’t enough to knock the ride quality crown off the XC40 Recharge’s head.

And the XC40 EV is no slouch in a straight line. Both the front- and four-wheel drive powertrains deliver their torque instantly, meaning you always have the confidence for an overtake. Just be cautious about getting the hammer down if you’re travelling longer distances – the less smoothly you drive, the more time you’ll spend at charging stations.

Thankfully, Volvo has thought about that and has engineered the throttle pedal to encourage a more mellow driving style. Unlike some older electric cars, it isn’t a simple on / off switch – it’s progressive and feels much more like a petrol or diesel car in use. 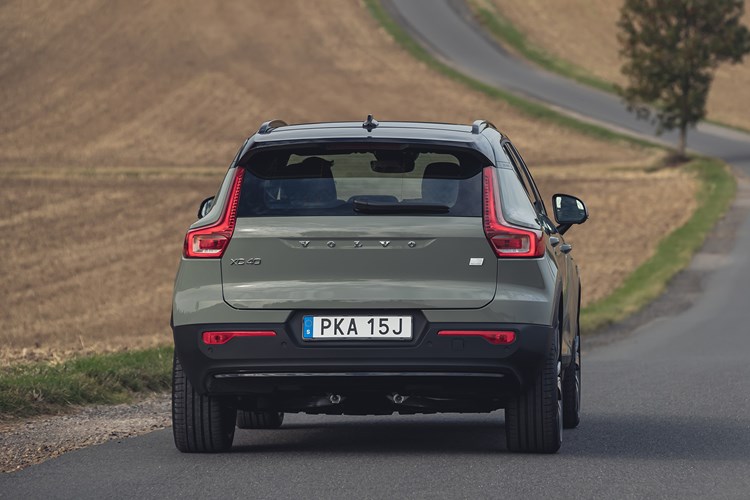 Press it gently and you get a small amount of acceleration. Batter the pedal into the floorboards and you get everything the powertrain has to offer which, in the 408hp model, gives you a very satisfying shove into your seat. Rather cleverly, though, the same action applies in reverse for the regenerative braking system. So, if you lift your foot off the throttle quickly, the brake regen is more severe than it is if you ease off the pedal gently.

Click through to the next page to read our verdict on the Volvo XC40, where we’ll let you know whether it’s worth your money. 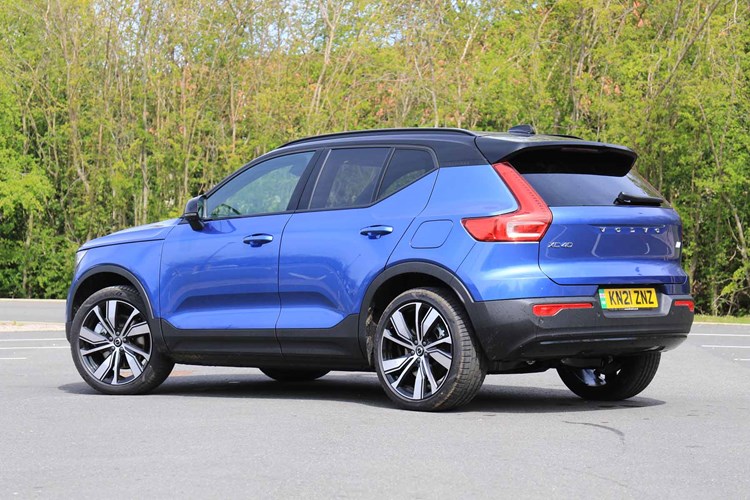 Should you buy a Volvo XC40 Recharge?

If you want a small premium electric SUV, the Volvo XC40 Recharge should be on your shopping list. It’s a quality product with a comfortable ride, a good range and more safety equipment than you can shake a high-visibility vest and an accident book at.

There are more exciting electric SUVs available, such as the BMW iX3. But we think the sporty SUV niche is becoming cliché, and we found it quite refreshing to drive a family crossover that was unapologetically set up for comfort.

Volvo’s electric powertrain really suits the XC40’s easy going nature. It delivers its power effortlessly and silently, it’s smooth and the arsenal of draconian safety equipment encourages you to not drive like a hooligan. The regenerative braking system has a similar effect on your driving, too, making you look further ahead to avoid touching the brakes and wasting energy.

Prices range from between £47,000 for the entry-level front-wheel drive model to more than £60,000 for the range-topping 408hp dual-motor variant. You’ll spend the same sort of money on a Mercedes EQA or an Audi Q4 e-tron, neither of which ride anywhere near as well as the Volvo. So, it’s down to your personal preferences on comfort.

It’s also worth noting that the flagship the plug-in hybrid version of the XC40 costs around £51,000 – and for just £4,000 more you could have the range-topping front-wheel drive pure-electric model. In this instance, we reckon you’re better off with the electric option.

Just to throw another spanner in the works, bear in mind that, for a similar amount of money, you could have a very well-equipped Kia EV6. Sure, it doesn’t have the same premium image as the Volvo, but it looks great, it’s better to drive and, if you pick the right battery pack and motor combination, it can comfortably drive more than 300 miles on a charge.