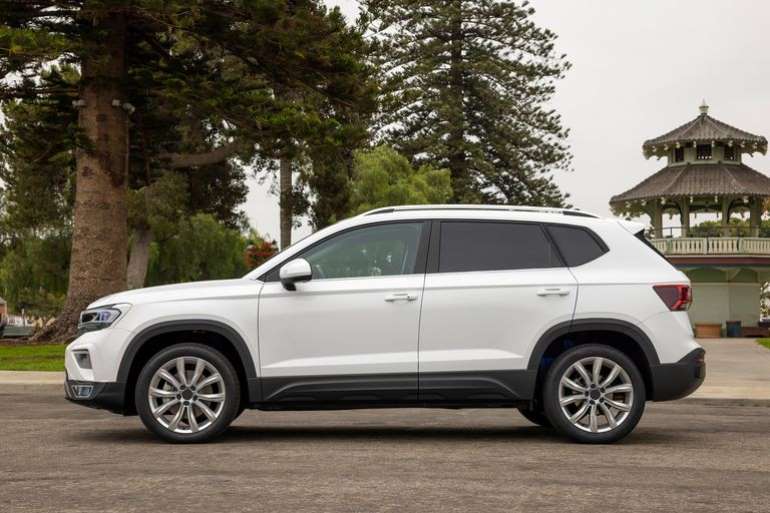 Oxnard, California, is an overlooked American automotive nerve center. The city surrounds Port Hueneme, where massive car-carrying ships disgorge vehicles for at least 18 manufacturers. It's also the port from which Tesla vehicles leave for export to Asia. That's led some of the carmakers to establish engineering and design facilities in the area. BMW has one there. And now, so does Volkswagen of America—a five-acre campus on Del Norte Boulevard, across from a Shell station with an integrated Subway sandwich shop.

So, while VW was dazzling the world's assembled press in September with the all-electric ID.4 small crossover, it simultaneously invited a select group of marginalized journalists to Oxnard to tour the company's facility, sample the company's upcoming 2022 Taos—a conventionally powered compact crossover—and do a deep dive into its new 1.5-liter turbocharged, four-cylinder engine.

Nearly a foot shorter, the Taos is more compact than the Tiguan, sized to compete in the red-hot twerp-ute market, a burgeoning segment that includes the trendy Nissan Kicks, stalwart Honda HR-V, sweet Mazda CX-3, and lackluster Ford EcoSport. It's an important genre, not only because of its insane sales growth, but because cheap crossovers are often the entry point for young customers buying into a brand for the first time. And that's that for the business school marketing lesson. 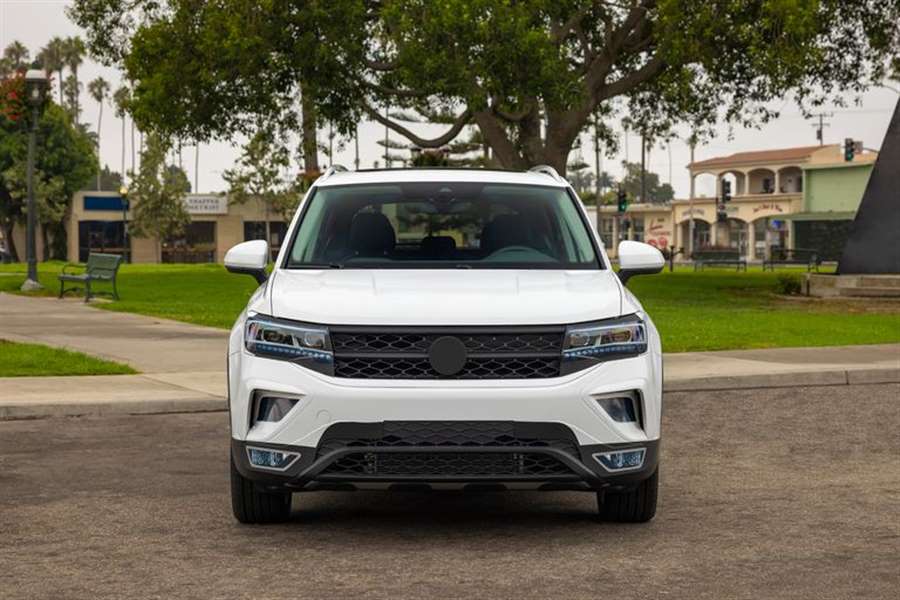 The pre-pre-production prototypes on hand were lightly camouflaged to avoid startling observers psychologically unprepared to contend with the profound visual impact of a small SUV that looks like a dehydrated Tiguan. On the outside they were wrapped in white vinyl, with subtle graphic elements taped to the headlights and covering the logos. On the inside, a fuzzy dash pad covered most everything but the tachometer and speedometer. That included the air vents, and it was a pretty hot day.

The drive itself would consist of a 30-or-so-mile lap through Oxnard and neighboring Camarillo and back to VW's campus. And during this tour of verdant, culturally diverse Ventura County, we would be shadowed by a VW representative so that if something went wrong or we tried to keep the prototype for ourselves, they could do … something. Maybe our proctor had a roll of duct tape with him. Or a shotgun. We obeyed the rules.

The featured attraction here was truly the new 1.5-liter turbo engine. It's destined to replace the 1.4-liter turbo four that's currently the standard powerplant in the United States-market Jetta and Golf. The 1.5-liter has a slight increase in piston bore diameter to reach its new displacement, but the big change is the use of some technology from the EA888 turbocharged 2.0-liter inline-four found in the Tiguan. The new engine will be capable of operating on Volkswagen's modified Miller-cycle combustion under light load conditions, which they've named the Budak cycle after its developer. When operating on Budak, the intake valve closes earlier that it would during normal operation, thus reducing the amount of fuel and oxygen drawn in and returning more efficiency. The 1.5-liter will also use a variable vane turbocharger to increase its responsiveness.

VW rates the new engine at 158 horsepower and 184 pound-feet of torque, which will be the sole engine in the Taos. That vaults right over competitors like the 141-hp Nissan Rogue Sport, 147-hp 2.0-liter Kia Soul, and 148-hp Mazda CX-3. And the VW will push that advantage by backing the engine with an eight-speed conventional automatic transmission in front-drive versions of the Taos. All-wheel-drive versions will get the familiar seven-speed dual-clutch transmission. The new 1.5-liter will be built at VW's engine plant in Silao, Mexico, which opened in 2013. And the Taos, designed for the North American market, will also be built in Mexico.

The route chosen for us by VW was flat and not curvy. There was a short blast southward on Highway 101, but no roads were challenging. There were several opportunities along the way, however, to stop and buy strawberries freshly picked from the coastal plain's fields. 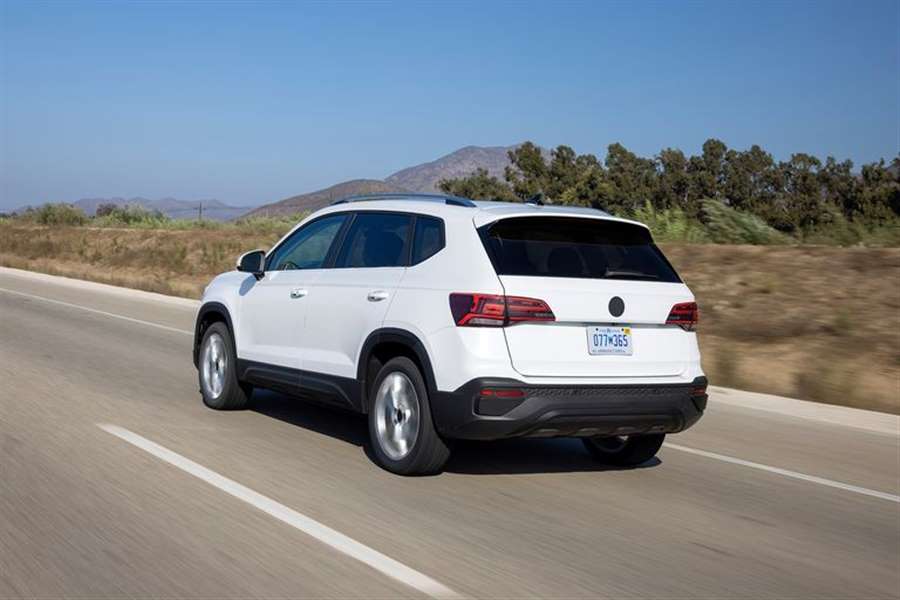 As an evaluation of the Taos, this was just a bit of early exposure, severely limited in its usefulness. But the engine does seem to make excellent low-end grunt, the transmission didn't do anything untoward, and the suspension didn't collapse riding along smooth pavement. The details that matter were covered up inside, so there's no way to positively say how well the interior is laid out. Naturally, a big-ass touchscreen is likely destined for the dashboard's center because everything now has a big-ass touchscreen.

The front wheel-drive Taos will make its official debut this month and is scheduled to hit dealerships around the middle of next year. And since it's destined to compete in one of the most price-conscious segments of the market, there's no reason to expect it to cost any more or much less than other cute-overs. So, figure it'll start at around $20,000 at the bottom and knock on $30K at the top of the range.

Back at the facility, there were Volkswagen products from around the world on hand for all sorts of testing. There were even a couple of prototype ID.4s, with technicians carefully peeling away their camouflage after that day's public debut of the car. There's something going on here.

That something is an inflection point, one where manufacturers are still developing vehicles powered by internal combustion engines while simultaneously prepping for the electrified future consumers will either want or will have forced upon them. Volkswagen was caught with its pants down in the diesel scandal and can't afford to screw up in the immediate future. So, right now it's wearing multiple pairs of pants. Jeans and chinos. Dockers and slacks. Snow pants and baggy shorts.

As the day was dying off, the assembled litter of journalists were led to a conference room set up with appropriate social distancing. There we enjoyed the comedy stylings of Johan de Nysschen, the still new senior executive of Volkswagen Group North America, who is this generation's Bob Lutz tinged with a hint of John Force. He likely said something profound and hilarious, but I really just wanted to write "comedy stylings."

It turns out that VW doesn't use Port Hueneme as a port of entry for its vehicles. So, why the company decided to plop down its latest facility in Oxnard is a mystery. Maybe it's because Oxnard is where the action is. Or maybe they just wanted to build somewhere with easy access to a Subway.