2022 Volkswagen GTI First Test: They Still Make ’Em Like They Used To 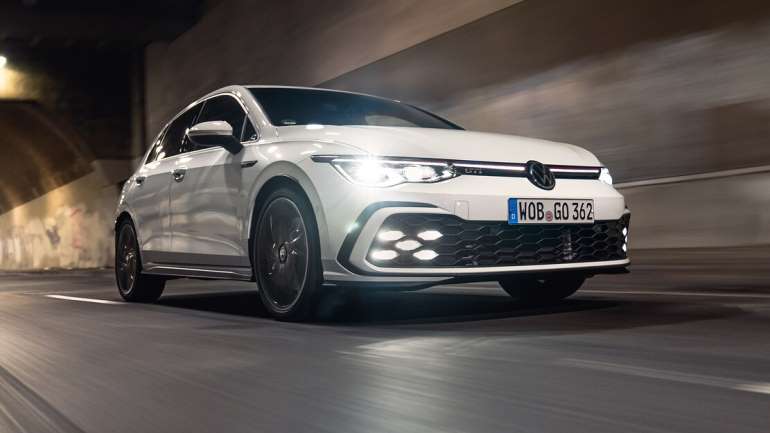 Can a car have a panic attack? No? Okay, good. For a second there, we wanted to throw a weighted car cover over our white 2022 Volkswagen GTI and slip some sort of vehicular benzodiazepine in its gas tank. If it could gain sentience, this shapely little hatch might incessantly blare its horn and idle at 4,000 rpm out of pure existential angst.

Could you blame the poor thing? First and foremost, it's a new gas-powered compact hatch from an automaker that has made it very clear that its future is both electric and filled mostly with SUVs. It killed the regular Golf hatch in the States, leaving the new MkVIII GTI and forthcoming Golf R as the only America-bound fruit from that once bountiful branch. As part of this Golf goodbye, our GTIs will come from Germany, not Mexico, and won't arrive here until late this year. 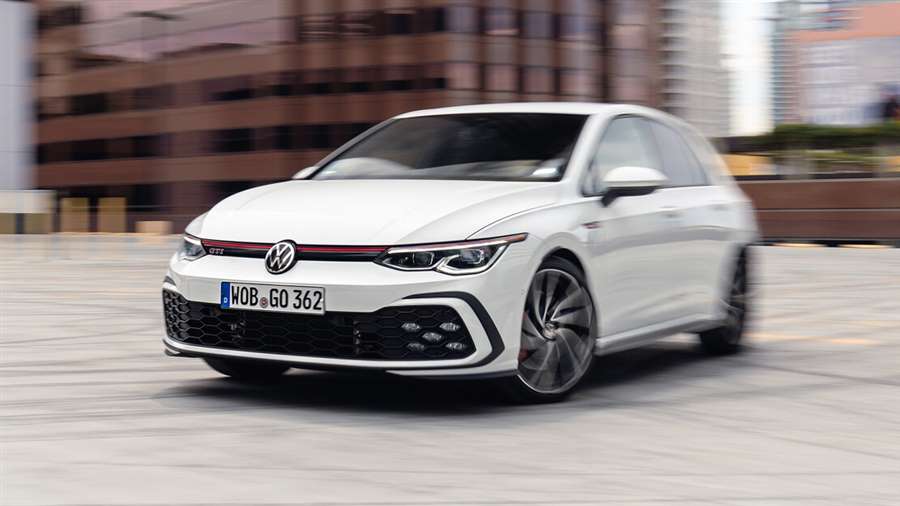 It's enough to make anyone a bit nuts. Though, from behind the wheel of the latest and greatest iteration of the perennial hot hatch gold standard, we might be a bit off with our silly anthropomorphism of the MkVIII. Scooting around traffic-clogged city streets, cramming gear into the cargo area, stuffing friends in the back seat, squeezing into tight parking spaces—it's all handled with the familiar chilled-out, cooler-than-you German modernism that makes the Golf—oops, Freudian slip—GTI such a fan favorite.

Oh, and it's also a hoot and a half to drive, but we'll get to that in a bit. The circumstance surrounding our first scoop of the MkVIII is a bit of a whirlwind; we'd not yet gotten so much as a physical walkaround of the new GTI before it buzzed to our test track to be put through our data-driven trials. So, consider this our first touch, first sniff, first drive, first test—first everything. 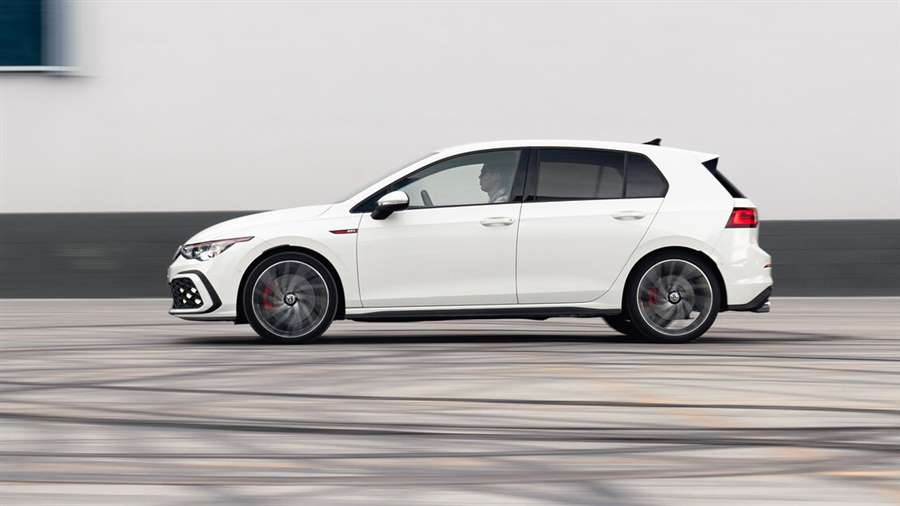 Same As It Ever Was? Hardly.
Still, in a way, this is a meeting of old friends. Underneath those fresh, ID3-esque exterior duds lie the augmented bones of the existing MkVII GTI. VeeDub's rather excellent and wide-ranging MQB platform is still here, so that means if you like how the MkVII GTI rides and drives—boy, you're going to love this.

The 2022 GTI is significantly spruced-up over the existing car. The MacPherson-strut front suspension's wishbone bushings, bump stops, and springs are revised and tweaked, along with the software associated with the optional adjustable dampers. All this is carried by an aluminum subframe that shaves 6.6 pounds over the old setup. It was purloined from the prior GTI Clubsport S, a scorching hot hatch that was briefly the FWD record-holder around the 'Ring. 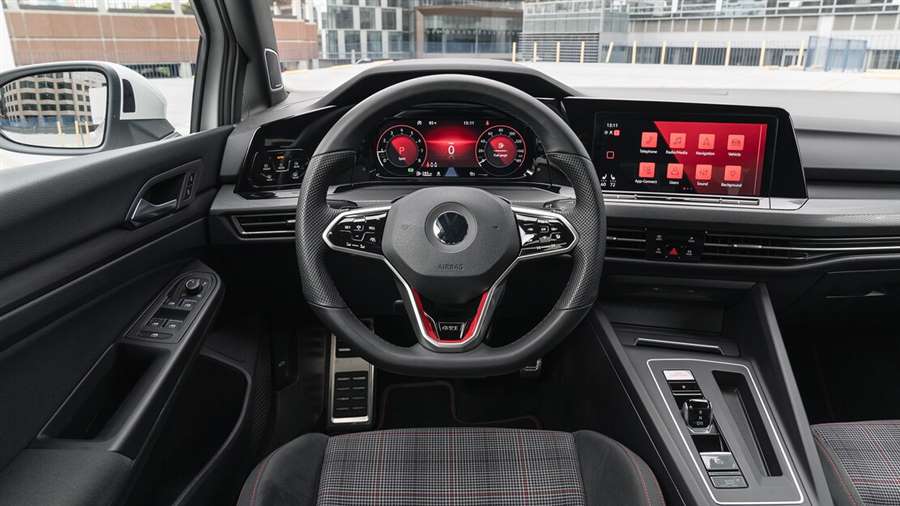 Elsewhere, the software for the electric-assisted steering has been re-coded for sharper turn-in when you want it and lighter effort when you don't. A new brake master cylinder modulates pressure based on driving style and environment: softer and more progressive around town in Comfort mode and a stiff, early bite when you're caning it.

Power, And Lots Of It
Power still comes from the EA888 2.0-liter turbocharged inline-4, but that is the last thing we'd want changed from the MkVII GTI. The Volkswagen Group's ubiquitous turbo-four has, for some of us, become the definitive engine that springs to mind when the subject turns to 2.0Ts. Power is a stout 242 horsepower and 273 lb-ft of torque, routed solely to the front wheels—as the GTI gods intended—through either a six-speed manual or a seven-speed dual-clutch DSG transmission, as in our test car. Crucially, a limited-slip diff is standard, so all MkVIII GTIs should fundamentally be created equal on the performance front. 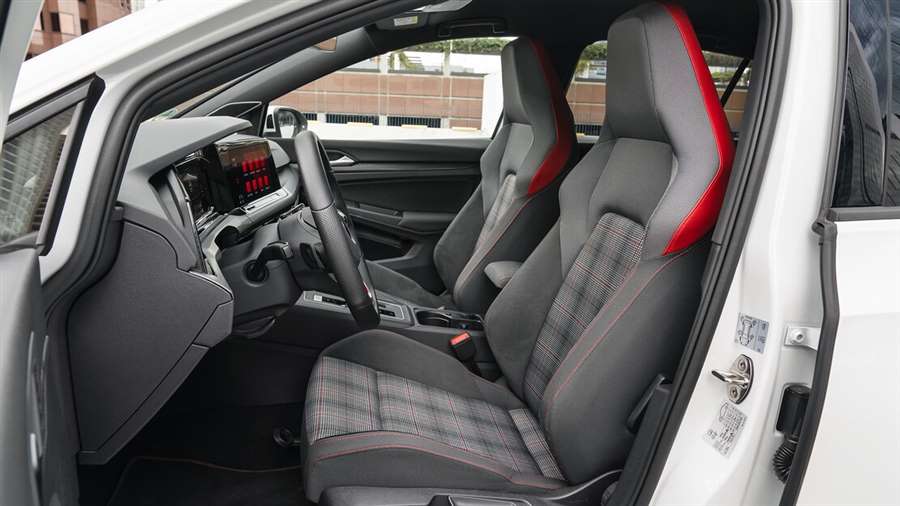 VW says all this adds up to a 0-60-mph run in 6.3 seconds, but we say VW's been taking pages from Porsche's playbook on purposeful underrating. On our strip, associate road test editor Erick Ayapana ran this automatic-transmission front-driver to a very impressive 5.4-second 0-60 time on its way to a 13.9-second quarter-mile, beating out a DSG-equipped MkVII by 0.6 second in both metrics.

The GTI's software didn't make it easy, though. Ayapana had to work around the big torque and tricky transmission tuning in the pursuit of a clean launch. "It's got sloppy launch control," he said. "It holds the engine revs super high and then rides the clutch for what seems like eternity, and after all that, it still couldn't manage wheelspin."

Heroic Handling Habits
Over on the figure-eight and skidpad, the GTI continued its boot-scootin'. It dispatched the ever-tricky figure-eight in 25.0 seconds at an average of 0.74 g, improving on the MkVII GTI with DSG by 1.1 second and 0.05 g. The new GTI hustled around the skidpad at a sweet 0.96 g average, topping its predecessor by a not-insubstantial 0.05 g. This is still notably behind the 24.1-second, 0.81-g average figure-eight time of the latest Honda Civic Type R, but that's fine; the Type R squares off against VW's own Golf R that's coming sometime later this year or early next year. 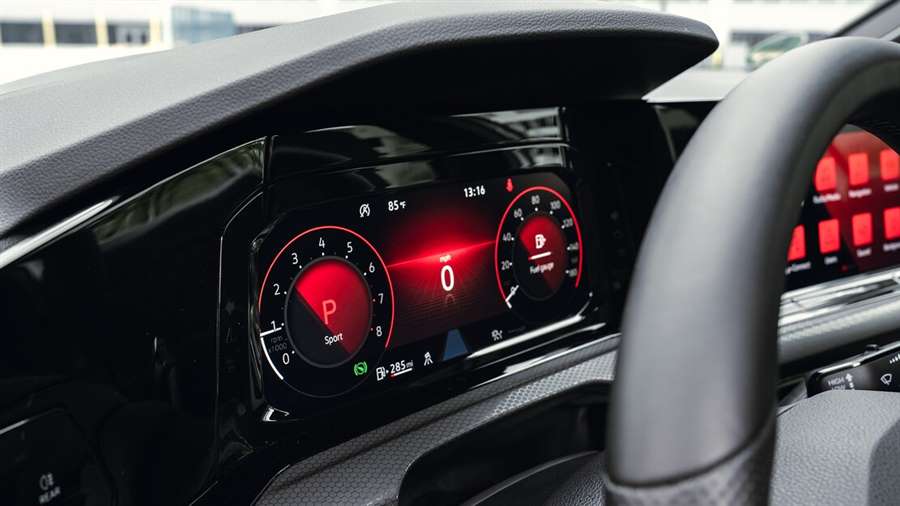 Back on the GTI, road test editor and handling head honcho Chris Walton was duly impressed. "Wow, Volkswagen has really stepped up its game," he said. "The steering is very good; it doesn't feel artificially heavy or light. Just right. I wasn't expecting the GTI to be this capable and fun." Still, like Ayapana, he noted the DSG as having sometimes smart, sometimes baffling programming. Both agreed on the GTI's excellent brakes, which returned a best 60-0-mph stopping distance of 104 feet. "Very confident and talkative brakes," Walton said. "Short travel and you can trail them deep into the skidpad."

Less Track, More Road
The track results are good, but how the new GTI fares on the road—both straight and curvy—is of far greater import. With keys in hand, we couldn't help ourselves—we went straight to the canyons. First impression is that of blissful neutrality; that standard LSD and extensive front-end fettling purged most of the nasty understeer that in the MkVII was always present on the fringes of a too-hot corner entry. Barrel into a corner in the new GTI, and you'll get some tug and scramble from the front end as all the systems frantically but effectively rein in your silliness and shoot you out the other side with nary a scratch.

As it has been for decades, the GTI's is an elemental driving experience, much like a Mazda Miata, Ford Mustang, or Porsche 911. This VW leans into the front-wheel-drive layout, with the most effective method of quick cornering being to feed in throttle just as you approach the apex and allow the front tires and LSD to pull you through like a slingshot. Suspension tuning is predictable and, in the stiffer Sport setting, requisitely flat and composed even during moments of aggressive weight transfer. 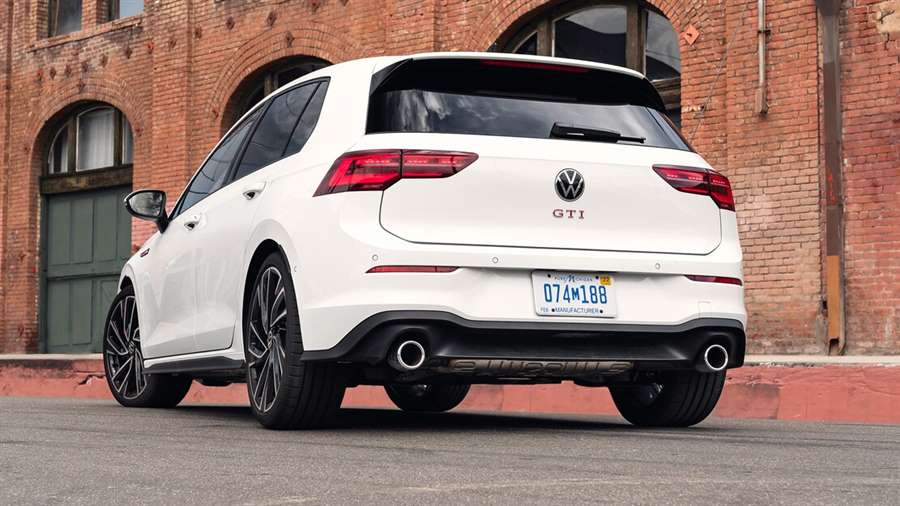 Beautiful Brake Balance
The steering is on the artificial end of the spectrum, but it loads up nicely and is sweetly accurate in the heavier Sport mode. The test team wasn't kidding about the brakes; they're no carbon-ceramic stompers, but these are some of the most confident hot hatch brakes we've experienced in some time. On much of our road drive, we left both the stability and traction control on, fully expecting the brake-actuated systems to sap brake efficacy after a few blasts through our test loop.

Not so. Through a combination of well-tuned TC/ESC and that new variable brake master cylinder, we had to drive absurdly fast on seriously tight roads before the brakes conveyed any sense of softness or fade. Even after extended bouts of hooliganism, the brakes continued to stop strong and true at every corner.

Two-Faced In The Best Way
Power is plentiful, but in torque we trust. Merging and hard pulls down straights were pure fun, with plenty of initial telltale rumble and wheel hop shake up front as the chassis struggled to manage all 273 lb-ft. When it hooks up, you're off, reaching speed and acceleration far beyond the expectations levied by the "GTI" badge on the rear liftgate. 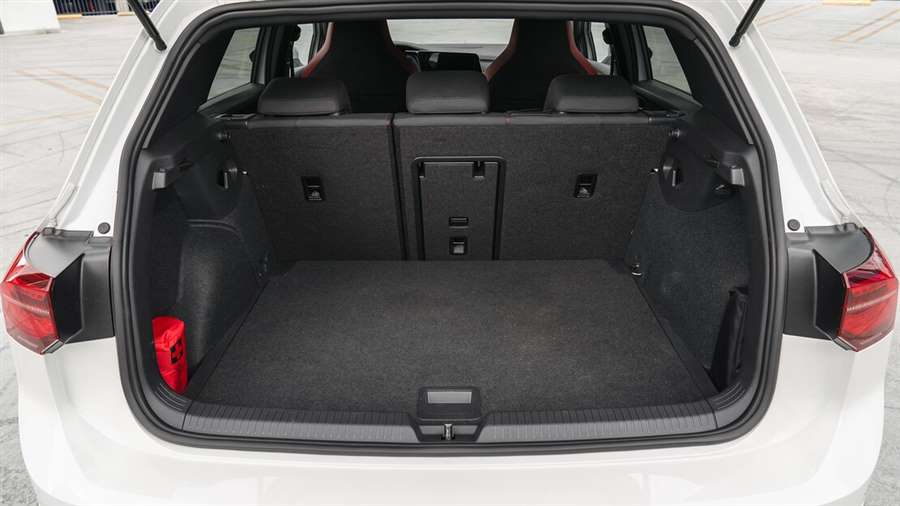 Time to settle down and go home. Back in Comfort mode, everything relaxes and decompresses, transforming a riotous sport compact into a regular hatchback with a vaguely firm suspension. On the oft-broken pavement that snakes through Los Angeles, every bump, crag, and expansion joint was both physically and acoustically well isolated, especially when you futz with the Dynamic Chassis Control's (DCC) 15-position slider to dial in your preferred level of aggression.

Who Asked For This?
Now we get to our singular glaring issue with the all-new VW GTI. It seems VW is keen on superimposing the all-electric ID4's interior tech onto its other new products, meaning the GTI's interior is almost entirely devoid of physical buttons. Instead, touch-capacitive panels adorn the dash and steering wheel, operating just about every function available. The headlights, climate control, drive modes, volume, tuning, cruise control, and cluster menu selection are all operated via these single-piece, backlit gloss plastic panels.

What's not touch capacitive is squirreled away in the sharp and pretty touchscreen infotainment system, but some items seem almost purposefully obfuscated. The traction control, for instance, is buried behind the vehicle settings menu under the "brakes" subsection. It's all very cutting edge and futuristic, but it feels very much like the solution to a problem that didn't exist. We got used to the touch controls within a few hours of seat time, but they never became second nature. What's more, most of the once-glossy surfaces became a modern art installation of greasy fingerprints and nasty smudges. Buttons, please.

Pricing—What We (Don't) Know
What we cannot report on is just how well equipped (or not) the new GTI will be when it hits dealers, as our example was a German-market car, skinny Euro registration plate and all, and the equipment levels could notably differ. Heck, we don't even have a clear idea of pricing, but figure it land somewhere around $31,000. For now, if you want to grab one of these, we think the wait will be well worth it. As the U.S.—and Volkswagen—increasingly cuts ties with internal combustion, it's nice to know joyful cars like the 2022 Volkswagen GTI will be with us until the final switch is flipped.

Tagged under
More in this category: « Volkswagen ID.4 review