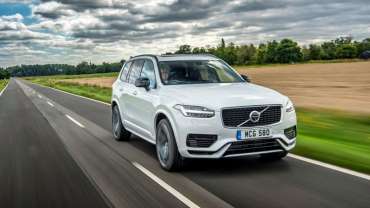 Back when Elon Musk was merely known for crashing his McLaren F1 and Jeff Bezos was a bookseller, Volvos were safe and sturdy cars made for ferrying around your offspring.

Fast forward to today and the brand has evolved into a stylish desirable car marque that no longer just trades off being the safest around.

Keep hitting the fast forward button and you'll see that a new Volvo XC90 is due in 2021. It'll be a hybrid and EV only affair.

With this in mind - is the XC90 worth buying still? Or should people wait for the new car? 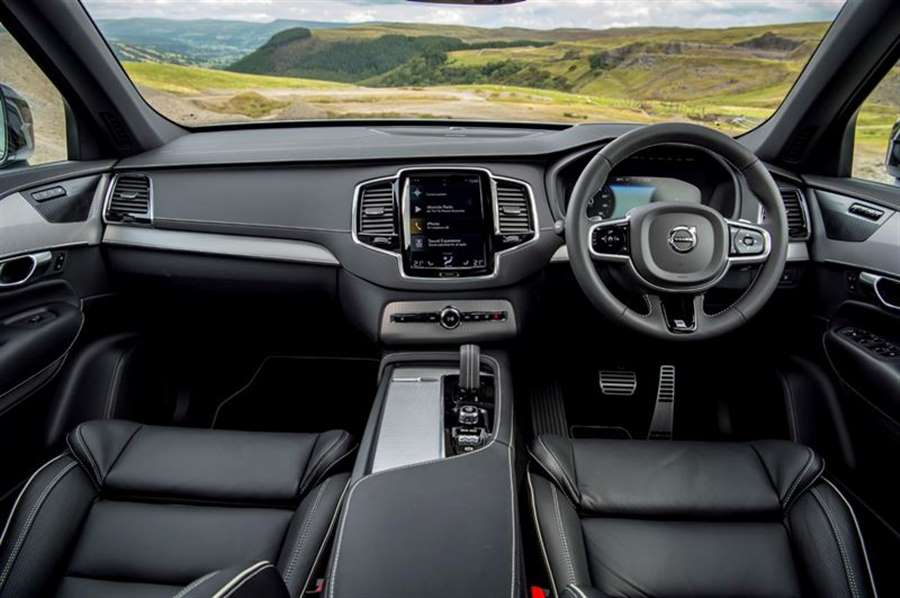 The best hybrid SUVs - on CAR

The XC90 T8 hybrid, or Recharge for short, is the most expensive, cleanest, frugalist, and quickest car of the XC90 range. Its raison d'etre is that it's a seven-seat plug-in hybrid - something of a rarity still.

It's aimed at the middle classes who can't quite commit to a fully-electric car, but still want the tax breaks and street cred associated with one.

While there's also a hint of the Q-car about it. Lovers of stealthy performance cars will be salivating at the thought of a 2.3-tonne family-hauler cracking the 0-62mph sprint in less than six seconds.

A 400bhp, £60k Volvo hybrid with a crystal gear selector 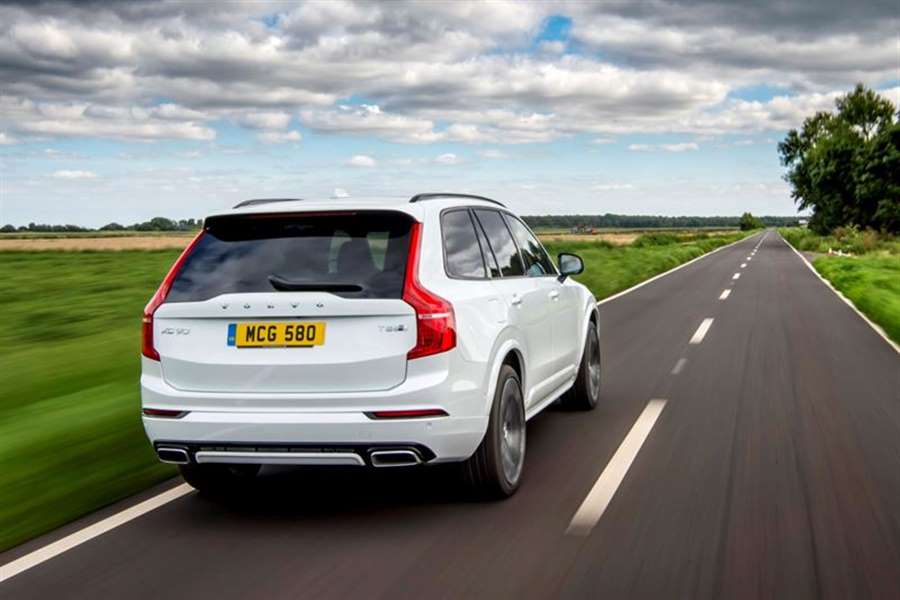 Expensive, fast, stylish and beautifully crafted, it’s a standard-bearer for the Swedish marque in its assault on the premium establishment, a move that’s being met with more success than Volvo dared hope.

The XC90 uses Volvo’s SPA scalable product architecture. It also underpins the S90 saloon and V90 estate, while the chassis was designed from the outset to package electric powertrains. In the T8 a petrol engine in the nose drives the front wheels via an eight-speed auto gearbox. A generator sandwiched between the two rapidly cranks the petrol engine into life, boosts torque and charges the battery as required.

The cells, housed in the central tunnel a propshaft normally calls home, feed a large single electric motor on the rear axle that also generates electricity under braking. A control unit in the engine bay synchronises the two power sources, ensuring happy, efficient collaboration and all-wheel drive when required.

Not quite – think effortless performance rather than unlikely dragster. Mash the throttle to the carpet in Power mode and the T8 launches pretty smartly, the battery pouring power into the electric motor as the turbocharged and supercharged direct-injection 2.0-litre four slogs its guts out. As a performance powertrain it’s undoubtedly effective, the claimed 5.8sec 0-62mph feeling entirely believable, but the car’s not inconsequential weight (2343kg) blunts performance. 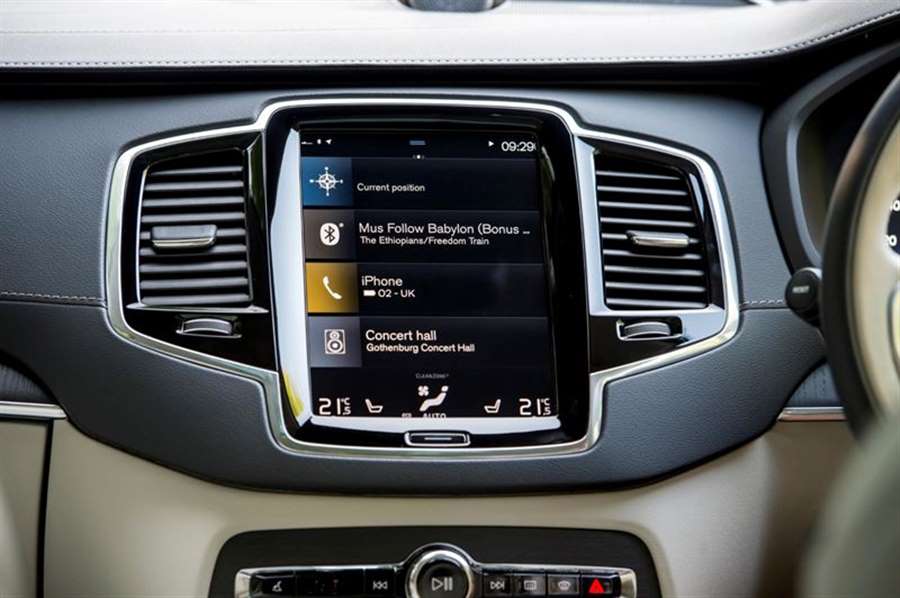 This kind of heavy-footed tomfoolery also feels pretty inappropriate, not because the chassis can’t cope – far from it – but because the petrol engine’s strains lack charm, shattering the XC90’s otherwise very endearing serenity. Volvo insists a more sonorous higher cylinder count would have been incompatible both with the firm’s product architecture and the wants of environmentally responsible consumers. Certainly the four-cylinder engine contributes much to the T8’s headline figures of 63-76g/km of CO2 and 83.1-100.9mpg on the combined cycle, though, after running one for six months, we can safely say the latter is an almost impossible figure.

The obscene three-figure MPG rating is synonymous with the plug-in hybrid car. We reckon if you charged religiously, and never drove more than 100 or so miles, the figure might be someway achievable. But the real hindrance to the XC90 is that when the battery is bereft of charge, you're realistically looking at a sub 30mpg car.

Volvo quotes an official electric range of 31 miles, but with day-to-day mixed driving expect more like 20.

Back to the drive modes. It's better to select the Hybrid and trade a little of Power’s throttle response and poke for improved economy and some far more agreeable peace and quiet. Either way the integration of electric and petrol power is almost seamless. At smaller throttle openings the petrol engine chiming in and out is almost undetectable, and the brake pedal is similarly well resolved, passing through the regenerative phase and into hydraulic braking with no discernible shift in resistance. 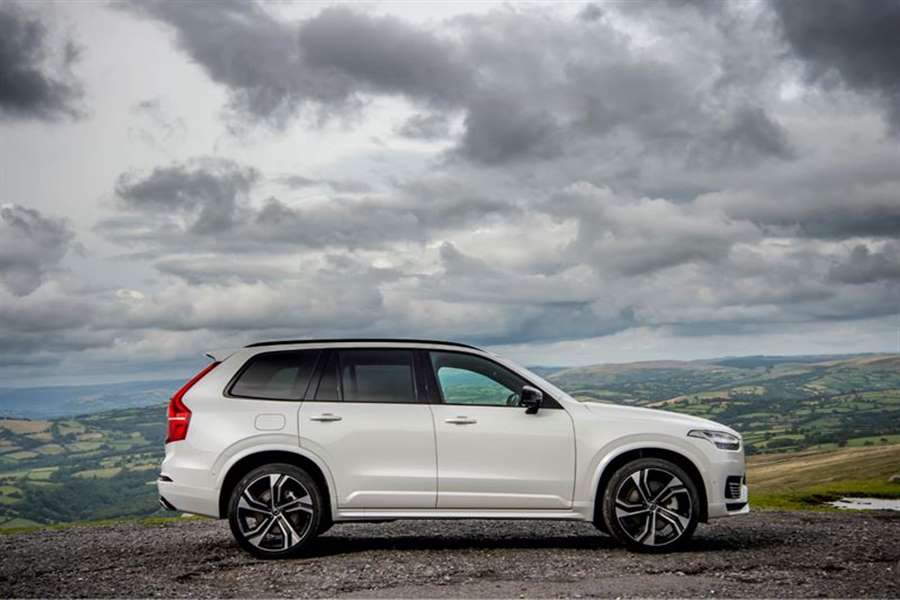 The usual PHEV functionality ensures a good degree of control: choose Pure mode to use only electric, select Braking on the gear selector for stronger regenerative braking on downhill runs, or even a lower gear for increased engine braking; use the instrument display or the dead-spot in the throttle pedal’s travel to stay on electric power, rather than accidentally triggering the petrol engine’s assistance.

Air-suspended XC90s deliver an impressive drive, blending a cosseting ride with impressive body control. Appropriately there’s a little initial roll before the outer air struts take up the slack, lending the 5m-long seven-seater the wieldy feel of something much smaller and lighter.

Conventionally sprung XC90s manage a good impression of the same body control but lose a good deal of the ride quality, occasionally running out of answers on the kind of weather-beaten roads the UK does so well. So budget for the air suspension, which also drops the rear of the car by 50mm on demand for the easy loading of heavy furniture and arthritic dogs.

Back to that crystal gear selector

Curious timbers, machined aluminium and acres of beige leather don’t sound too promising but, almost irrespective of colour choice, the XC90’s is one of the finest interiors out there, certainly in anything like a comparable price bracket.

Fit and finish are exemplary, the design striking in a very pleasing, understated way and the overall sense of light, space and uncluttered calm the perfect ally to the T8’s potential for 31 miles of near-silent pure electric transportation. Additional NVH work has banished much of the background chatter of fans and compressors a combustion engine’s machinations normally mask, leaving an impressive and luxurious absence of noise.

Although the heating/cooling functions are controlled via the car's touchscreen. Which is annoying and fiddly on the move. Turning the heated seats on to their full power requires three stabs at the screen, for instance. And we can't help but the crystal gear selector is a bit...much.

The XC90 is fundamentally a very fine SUV, and the hybrid powertrain has much to recommend it, not least the tax breaks afforded by its miserly CO2 output. While obviously 400bhp means it shifts like a V8.

However, for most people a diesel-engined XC90 delivers comparable if not superior economy, particularly if the battery’s never charged from the grid (50% of its existing PHEV owners don’t, according to Volvo) but the T8’s potential for both lunging bouts of acceleration and silent electric running is hugely attractive. Much like the car itself.

Since being launched, other manufacturers have caught up by offering plug-in hybrid SUVs. Audi, Range Rover, and BMW all have these in their arsenal - and all are newer too. Yet, the XC90 still delivers in being devastatingly fast and handsome, and nowhere near as audacious and flashy as them.

Published in Volvo
Tagged under