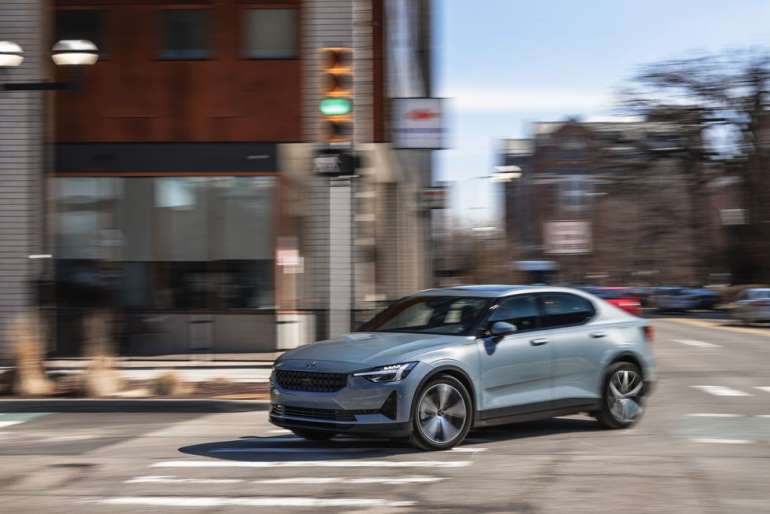 What's a Polestar? That was the follow-up question from a curious couple who asked us to identify the 2022 Polestar 2 we were driving in and around Santa Fe, New Mexico. To paraphrase, we explained that Polestar is an all-electric subsidiary of Volvo, and the squat Scandinavian-designed vehicle in question is currently the sole mass-produced model in its portfolio. Only the Volvo reference appeared to register, so we skipped the stuff about the Polestar 2 being the company's first EV, being built in China, and being sold directly to customers via the internet.

For 2022, new configuration choices and other notable improvements make the Polestar 2 more competitive in the premium-EV space, particularly versus the popular Tesla Model 3. Previously, the Polestar 2 was offered only as a feature-laden Launch Edition with dual motors and a $61,200 starting price. Now that many previously standard features are instead divided between the new $4000 Plus and $3200 Pilot packages, the starting point of the dual-motor powertrain configuration is $10,000 less. Making the '22 Polestar 2 even more accessible is the new single-motor, front-wheel-drive variant that went on sale in January. It starts at $47,200 (an amount that drops below $40K when you consider the available $7500 federal tax credit).

Since we've already tested a dual-motor 2 with the $5000 Performance package and Polestar says the 2022 alterations don't affect its driving behavior, we focused on the single-motor example. Its driving experience is less satisfying from an enthusiast perspective, but the differences are likely inconsequential to most shoppers. The single motor delivers 231 horsepower and 243 pound-feet of torque to the front wheels, producing the immediate thrust characteristic of electric vehicles. The sensation is available on demand from a dead stop or when passing on the interstate. The effect is simply amplified when two motors make a combined 408 ponies and 487 pound-feet, sending our dual-motor tester to 60 mph in 4.1 seconds. The single-motor model weighs 254 pounds less and is notably slower, taking 6.8 ticks to reach 60 mph. That 2.7-second delta is almost identical to the difference between the two powertrains at the drag strip, where the standard car completed the quarter-mile in 15.3 seconds at 93 mph versus the dual-motor's 12.7 seconds at 109 mph. The front-drive model's top speed is electronically limited to 101 mph; the extra electric motor feeding the rear axle ups that threshold to 125 mph.

The front-drive Polestar 2 also lacks the point-and-shoot dynamics that make its all-wheel-drive counterpart feel more playful. With the stability-control system set to ESC Sport, you can coax the AWD model's tail to step out in a controlled manner for maximum fun. For those less interested in such juvenile antics, the FWD version still feels athletic and refined. Even on the standard 19-inch wheels, it's remarkably planted and sure-footed, thanks in part to its standard summer tires—Michelin Primacy 4s, in the case of our test car. Skidpad grip amounts to 0.88 g, and stops from 70 mph happen in 161 feet, results that trail the dual-motor version's by a mere 0.02 g and four feet, respectively. The worst road imperfections are more pronounced on models with the optional 20-inch wheel-and-tire combo, but the cabin is impressively isolated from the outside world. The accurate steering includes three adjustable levels of effort—light, standard, and firm—but none generate any actual feedback. The most aggressive regenerative-braking setting provides 0.3 g of deceleration and enables true one-pedal driving. The brake pedal's firm action and short travel also feel more assuring than that of many other EVs.

Regardless of motor count, every Polestar 2 features a 75.0-kWh battery pack. While that net capacity is unchanged for 2022, Polestar credits increased range to "controller software and vehicle efficiency improvements." The EPA estimates that the single-motor model has a driving range of 270 miles per charge, which is only 21 miles more than the dual-motor's 249-mile rating (16 more than before)­. Plus, thanks to the magic of over-the-air updates, 2021 models can unlock that extra range too. The same applies to the car's maximum DC fast-charging speed, which rises from 150 to 155 kW (we saw a 154-kW peak at an Electrify America unit). Polestar says charging the battery from 10 to 80 percent at a 150-kW unit should take 33 minutes. In our 10 to 90 percent charge test, getting to 80 percent took slightly longer than claimed, at 39 minutes. And the charging rate drops off substantially above 80 percent; getting to 90 percent took 56 minutes, for an average rate of 75 kW, which is at the slow end of today's EVs.

The single-motor example we drove in New Mexico began the day with close to a full charge, and after two trips cruising back roads and highways between Santa Fe and Los Alamos (approximately 180 miles total), our battery's charge stood at about one-third. Back home on our 75-mph-range route, our front-drive test car traveled 220 miles on a full charge and averaged 89 MPGe. For comparison, the dual-motor Polestar 2 went 200 miles and averaged 84 MPGe in the same test.

Racking up those miles in the Polestar 2 is enjoyable thanks to an elevated seating position and a tall greenhouse with good forward visibility. The back seat is comfortable enough for two adults, and there's lots of cargo space between the rear hatch and a smaller underhood compartment. The 2's interior looks minimalistic, but the space has distinctive finishes and sturdy panel fitment. It feels like sitting in a Scandinavian coffeehouse­–except there's only one easily accessible cupholder between the front seats; a second is hidden under the center-console lid. The centerpiece of the cockpit is the vertically mounted 11.2-inch touchscreen, which features an innovative Google-developed OS infotainment system meant to replicate the feel of a smartphone or a tablet.

While that's familiar to most folks, the Polestar brand and this high-riding hatchback aren't so much. Polestar acknowledges its lack of brand awareness and says increasing it was a top priority this year. After what can be considered a soft launch of the Polestar 2 more than a year ago, the company says it ramped up marketing in 2021. Likewise, it has been expanding its North American network of Polestar Spaces (a.k.a. dealer showrooms) from three in 2020 to around 30 today. The effort isn't expected to make Polestar the next Tesla, but it should improve sales and drum up interest for future models such as the forthcoming Polestar 3 SUV. Then maybe Polestar 2 early adopters won't have to answer so many questions.

Tagged under
More in this category: « Lamborghini will build an additional 15 Aventadors due to the fire on the cargo ship Meet the latest generation Honda Civic »