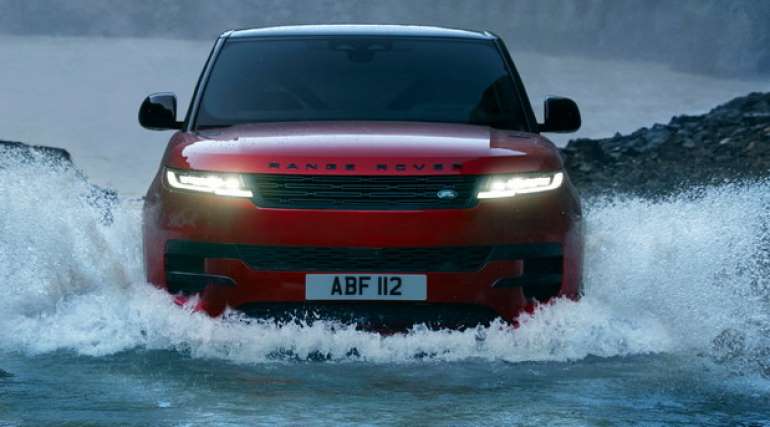 The new Range Rover Sport was unveiled at the global premiere with a historic first ascent in the world with a flooded dam overflow in Iceland.

During its historic rise, the new Range Rover Sport withstands a sudden torrent of water flowing down the ramp of the Karahnjukar Dam - the largest of its kind in the world - at a speed of 750 tons per minute. The risk of losing traction would mean sinking down a dangerous 90-meter drop at the foot of the dam overflow to the bottom of the valley below.

The third-generation Land Rover luxury high-performance SUV is the most desirable, technologically advanced and capable to date, combining an imposing presence on the road with an instinctive driving response using the most advanced combination of chassis technology ever built into Land Rover.

The successful ascent to the dam spillway was first demonstrated at an exclusive event at the Jaguar Land Rover Center for Advanced Product Creation in Gaydon, UK. The official James Bond stunt driver Jessica Hawkins was behind the wheel as the new Range Rover Sport demonstrated its strength, traction, performance and composure, completing the latest in a series of challenges for the luxury Land Rover high-performance SUV. Previous achievements include a record climb to the top of Pike Peak, the first recorded crossing of the Rub el Hali Desert ("Empty Space") on the Arabian Peninsula and the first ascent of 999 steps to the Heavenly Gate in China in 2018.

Nick Collins, CEO of Jaguar Land Rover, said: “Land Rover's revolutionary MLA-Flex architecture and the latest chassis systems have been combined to deliver the highest levels of dynamism we've ever seen in the Range Rover Sport. Integrated chassis control manages a comprehensive package of innovations, and coordinates everything from the latest variable volume air suspension system to our Dynamic Response Pro electronic active differential control. The result is the most exciting and exciting Range Rover Sport ever. ”

The ascent of the dam overflow was the last obstacle on the way from the bottom of the valley to the top of the dam, and it included a flooded riverbed, concrete tunnels of the hydroelectric power plant and the rocky wall of the dam itself. The final section of the 294 m dam overflow rises at an angle of 40 degrees and rises 193 m.

The base of the New Range Rover Sport is in the advanced, flexible Modular Longitudinal Architecture (MLA-Flex), which provides the perfect foundation for its superior dynamics and unique sophistication. Its range of powerful and efficient powertrains includes two six-cylinder Extended Range Electric Hybrid plug-ins, providing a range of fully electric driving up to 113 km (70 miles) and CO2 emissions of just 18 g / km1.

The new 530 hp V8 Twin Turbo delivers sports car performance as it goes from 0-100 km / h in just 4.5 seconds (0-60 mph in 4.3 seconds) with Dynamic Launch enabled. Customers can also choose from some of the powerful and efficient mild hybrids with Ingenium petrol and diesel engines, while all-electric will be available in 2024 as Land Rover continues its electrification journey.

More in this category: « Honda ZR-V is also arriving in Europe China is negotiating the extension of subsidies for electric vehicles »