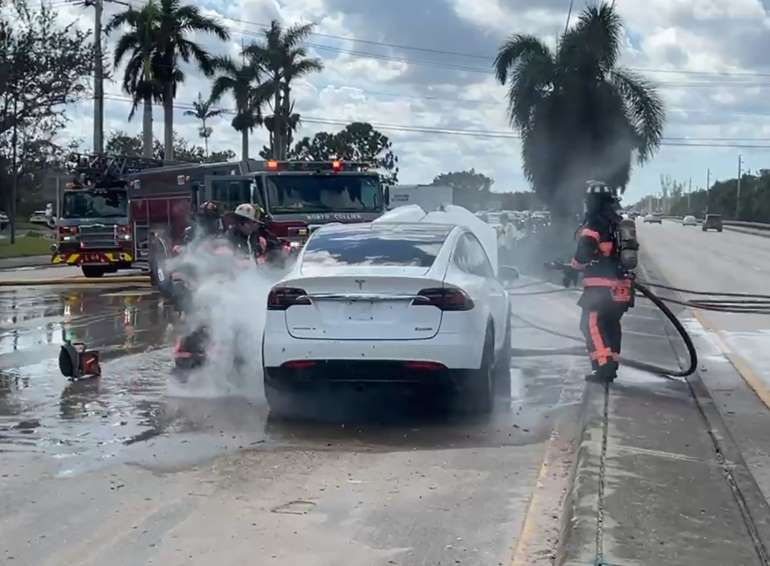 Hurricane Ian created numerous problems in Florida, and firefighters in this American state became aware of the danger posed by submerged electric cars.

Numerous electric vehicles were under water during the hurricane, and the batteries that were soaked could soon catch fire, so the owners of such cars were warned of the danger of fire.

Jimmy Patronis, Florida's chief financial officer and state fire marshal, posted the warning on Twitter, noting that the first cases had occurred, some of which he had personally witnessed. He also posted a video of when firefighters tried to put out a fire on a Tesla Model X that caught fire in the middle of the street. One of the onlookers said that they poured more than 5,500 liters of water on the Tesla, but the car was still smoking.

Extinguishing a battery fire requires special training and understanding of electric vehicles, and a fire can last several days even with the intervention of firefighters. According to a recent study by AutoInsuranceEZ, hybrid vehicles are actually more susceptible to fires than electric vehicles, but the bigger problem is that the fire itself is extremely difficult to put out. Due to corrosion in the cells of the lithium-ion battery, the electric car can emit smoke and flames for a long time, even after being submerged in water.

As Index.hr writes, considering that Florida has the second largest number of electric vehicles in the USA (behind California), Florida is becoming aware of this problem. At the end of last year, around 100,000 electric vehicles were registered in this federal state.

Tagged under
More in this category: « Ford F-150 arrives in Europe BMW revealed how long it will keep manual transmissions »