Kia Sorento winner of Red Dot and iF design awards 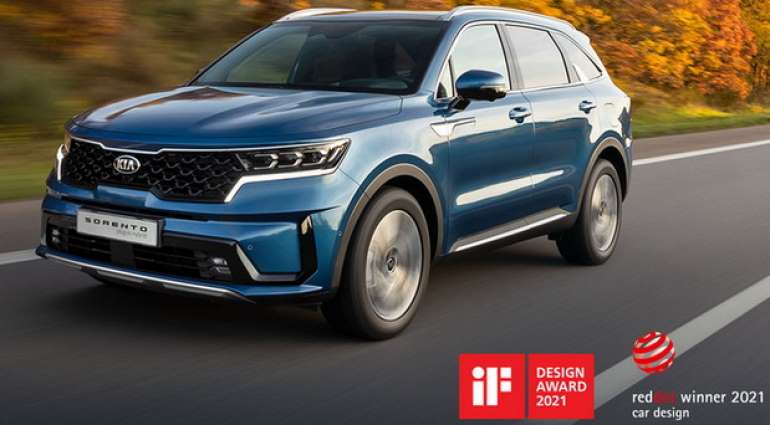 With the latest Red Dot and IF awards, the design-driven Kia brand continues its remarkable string of successes in these two competitions. Since 2009, when the Kia Soul became the first Korean model to win Red Dot, 26 Kia models have won this award. As for the iF award, which Kia won for the first time in 2010, the number of awarded Kia models, including the new Sorrento, climbed to as much as 21.

Shortly after last year’s premiere, the Sorento received recognition for outstanding off-road vehicle design in 2020 from Auto Bild Allrad magazine. After that, he won the most significant German car award, the Golden Steering Wheel 2020, in the segment of large sports SUVs. In March this year, it became the Women's World Car of 2021 in the category of large sports SUVs.

The new generation of sports SUV was created in cooperation with Kia's world design network. Karim Habib, head of Kia's global design center, said: "In designing the new Sorrento, we wanted to first develop the robust aesthetics of previous generations of models, while using a greater dose of sophistication and elegance. is a mature and balanced but confident design. We are delighted that prestigious institutions, which share design awards, such as Red Dot and iF, have recognized our work. "

Red Dot and iF: two globally most important design awards

The Red Dot and iF design awards are among the largest and most significant design competitions in the world. The Red Dot Award is awarded each year at the North Rhine-Westphalia design center and is divided into three disciplines: product design, brand and communication design, and concept design. The Red Dot Awards for product design have been awarded since 1955, and this year's competition was attended by manufacturers and designers from 60 countries, who submitted 7,800 products. The submitted products were evaluated by an international jury, which consisted of about 50 independent designers, design professors and journalists from various sectors. In addition to aesthetics, products are evaluated on the basis of criteria such as the degree of innovation, functionality, ergonomics, quality and environmental friendliness.

The iF Design Award, organized by the International Forum Design GmbH of Hanover, has existed since 1954 and is one of the leading independent design institutions in the world. This year, competitors from 52 countries registered more than 9,500 products, and the competition itself experienced several novelties. These are e.g. digital preliminary phase ('Online Preselection') in which half of the submitted works entered the finals ('Final Jury'), transparent evaluation was performed in all categories, including the new categories 'user experience' (UX) and 'user interface' ( UU). Other categories are products, communications, packaging and service design, architecture, interior design and professional concepts. This year, the iF jury was composed of 98 independent international design experts. All award-winning products are published in the "iF World Design Guide" catalog (ifworlddesignguide.com) and in the "iF Design App".

Tagged under
More in this category: « You’ll never guess what the Chevrolet Camaro is having trouble with Madness called Porsche 911 »