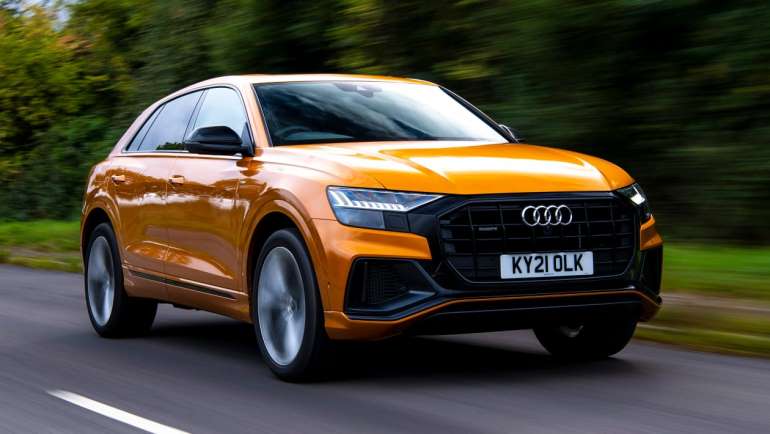 If you’re able to take advantage of all the ways that this plug-in hybrid Q8’s powertrain can save you money, then this is the pick of Audi’s swoopy SUV range. It’s wonderfully refined both at low and high speeds, and it’ll be very frugal if used as intended. The only thorn in its side comes from BMW; the X5 plug-in hybrid has a greater electric range, is cheaper to run and costs less to buy in the first place.

With all the hype around fully electric premium SUVs, sometimes it’s easy to forget that despite offering many of these, Audi still sells quite a few with combustion powertrains.

Some of those rely solely on a fuel pump for replenishment; others, like the Q8 TFSI e, mix the ease of refuelling with petrol on longer journeys with just enough electric range to make every day trips both very cheap and emissions free. As long as you remember to recharge the car whenever you get the chance, that is.

At the lower end of the scale, some cheaper PHEVs lack the range or indeed the power in electric mode to make them genuinely usable as an EV. The Q8 performs more than well enough on both counts. In-depth reviews

The eagle-eyed might have spotted that the car in our images is a 60 TFSI e rather than the 55 plug-in model; the former has recently been deleted from the Audi range. However, the pair have identical outputs from their petrol and electric systems - only the combined output is pegged back slightly to the benefit of efficiency in the latter.

Electric power comes from a single motor that makes a modest 134bhp. However, more relevant is its torque - at 400Nm, it’s only 50Nm behind the petrol element of the hybrid setup, with that maximum available almost the instant you set off, too. Left to its own devices, it’s great; smooth, quiet, and with enough shove to more than keep up with everyday traffic, even up to its electric-only top speed of 84mph.

Thanks to a 17.9kWh battery, it’ll cover up to 28 miles between charges according to official WLTP data - a number that, in our hands, seemed entirely achievable.

Together, the two units deliver a strong but linear surge of acceleration. Throttle response isn’t quite a match for a full EV, but it feels keener than the standard petrol options in the range. It even sounds tuneful, in a fairly subdued and refined manner.

In fact, refinement is the Q8’s greatest strength. Despite the vast wheels, the car soaks up bumps admirably, even at low speed. It gets better the faster you go, proving itself to be a phenomenal long-distance cruiser.

It isn’t that fun to drive, though. It weighs a chunky 2,430kg - over 300kg more than the non-hybrid V6 petrol Q8. But while its weight and significant width mean that agility on twistier roads takes a hit, it is stable, grippy and predictable in the way it behaves. Likewise the steering, which is precise but doesn’t offer much feedback.

But what of its efficiency? Officially, the Q8 achieves 97.4mpg. That of course will vary wildly based on the type of driving you do, and how far you travel over a single journey. However, we found that from a full charge, a 30-mile trip involving plenty of 70mph driving on motorways resulted in 101mpg - and there was still 12 miles of electric range left. In other words, as long as you’re able to charge at home and you make sure that the battery is topped up, you can achieve very low running costs at a time when petrol and diesel prices are sky high.
The Black Edition sits in the middle of a three-trim structure and is priced from £79,835. The range kicks off with the £75,935 S line, which gets 21-inch wheels, matrix LED headlights, air suspension, leather seats and the same fantastic three-screen infotainment and driver display as the rest of the Q8 range. The extra outlay for Black Edition adds larger 22-inch wheels, a black styling pack and polished wood inlays inside.

The range-topping Vorsprung adds much more kit, some of which you might hope was standard on the circa-£80,000 lesser trims anyway. Additions include a 360-degree parking camera, a head-up display, a Bang & Olufsen sound system, plus ventilated and massaging front sports seats. These extras, plus a comprehensive driver assistance package, brings the total to £97,435.

Those costs might seem high when the petrol Q8 TFSI Black Edition costs £73,425, but for company car users, those numbers will soon be recovered. Due to the emissions savings, the 55 TFSI e sits in the 13 per cent Benefit in Kind band. For a higher rate income tax earner, that means deductions will total £4,267 each year. Go for the pure-petrol model, and its placement in the top band means you’ll be charged nearly £11,000. In other words, you’ll recoup the extra outlay in the first year, and save from there.

BMW’s X5 xDrive45e represents the Q8’s closest competition. Performance is very similar, but the BMW is even cheaper to run, as its larger 24kWh battery promises a 54-mile electric range. It also means that it’s even cheaper for company car users to tax.

There’s one other drawback too. While space inside the rear of the Audi is still strong despite its more rakish roofline, at 505 litres the boot is 100 litres down on a non-hybrid Q8 due to the placement of this plug-in hybrid’s battery. At 505 litres with the seats up, this is still enough for a family, say, but it’s a fact that’s worth bearing in mind if you need practicality - then again, if you’re buying a Q8 in the first place, given it’s sportier styling this might not be your main consideration.