Tested: 2021 Audi RS6 Avant Is About More Than Numbers 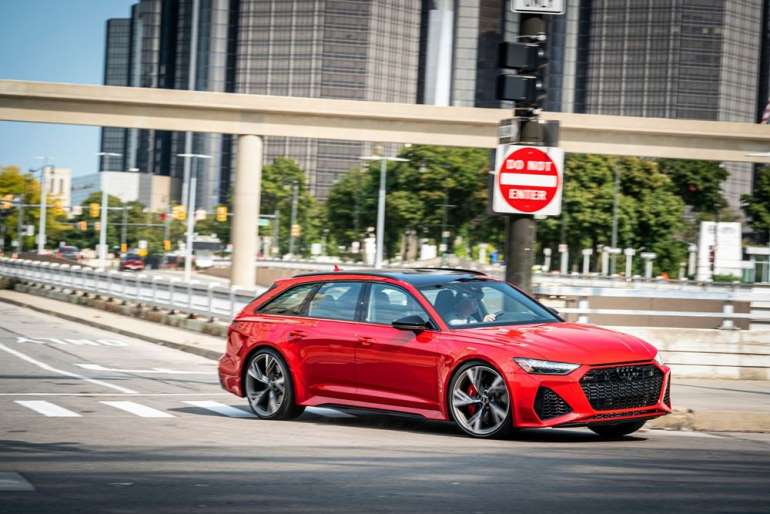 Ever hear of left-digit bias? It's the reason ShamWows cost $19.95 instead of $20 and why people say they're 39 instead of 40. We focus on that first digit and assign it undeserved importance because our cave-dweller brains are easily tricked. This is why the 2021 Audi RS6 Avant's certifiably ballistic 60-mph time of 3.1 seconds seems, in a bizarre way, mundane. If that time were two-tenths of a second quicker, we'd be petitioning for National RS6 Day, a time to celebrate and reflect on the RS6's righteous and scarcely believable acceleration. Instead, we're like, "Yeah, about what we expected." Can you really even feel the difference between a 2.9-second and 3.1-second run? Sure, to the same extent you notice that five-cent difference in the pretax price of ShamWows and a $20 bill, which is to say barely at all. But thanks to left-digit bias, the RS6 Avant puts us in the unusual position of apologizing for numbers that should require no apologies.

Those numbers include the output from the twin-turbo 4.0-liter V-8—591 horsepower and 590 pound-feet of torque—and the quarter-mile run of 11.5 seconds at 120 mph. These are impeccable performance bona fides, though maybe not what we consider supercar numbers these days. Then again, this is a station wagon. That's easy to forget when you're behind the wheel, looking out over those flared front fenders (2.5 inches wider than a standard A6's) and listening to the turbos and sport exhaust carry on a lively banter of chuffs and thunder. The cargo area is capacious and practical and hidden by a slick motorized cover, but you'll want to lash down those groceries because what's behind you tends to slip your mind when your skull is crushed into the headrest with the force of gravity (and then some). Activate launch control and you might see the gauge-cluster accelerometer spike at 1.19 g's, as we did. That'll scramble your eggs and your inner ear. 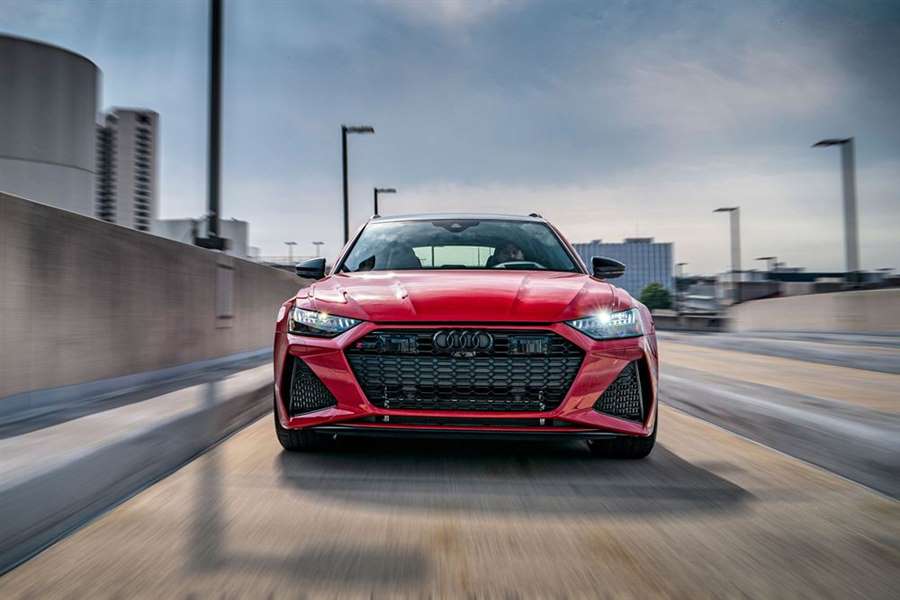 The Avant isn't just a drag-strip specialist, though. Like many of Audi's RS forebears, the RS6 is seemingly handicapped by a front-loaded weight bias, that V-8 overbite saddling the nose with 55.0 percent of the car's heft. But in practice, the RS6 feels perfectly balanced and even a little tail-happy thanks to the magic of torque vectoring and four-wheel steering. The rear sport differential can send almost all the torque to one side or the other, collaborating with the rear steering to endow the big Audi with instant turn-in. Add some throttle with your steering lock—which in a nose-heavy all-wheel-drive car would normally result in tragic understeer—and the rear end will start to swing wide while the front holds the line. The RS6 Avant is the unlikely 5031-pound car that can dance. Again, don't get too obsessed with the at-the-limit numbers (in this case, a middling 0.94 g on the skidpad). It feels plenty grippy when you're bombing down your favorite off-ramp.

LOWS: Thirstier than a salmon in the Sahara, exotic price.

So Audi nailed the essentials, and—here's the tricky part, sometimes—it did it with panache. Just look at this thing. Is this not the meanest wagon yet conceived by humankind? After an initial 10-minute drive, we had two text messages from neighbors who'd seen the car on the road. Sample: "Was that an RS6? Is Audi finally bringing that back to the U.S.? Woooowww." The basic shape and stance are so perfect that you recognize this car from 100 paces, but it's also interesting when you zoom in on the details. Check out the yellow decals inside the headlights, warning you not to stare because there are lasers in there. Or the Audi Sport puddle lights when you open the front doors at night. Or the optional blacked-out Audi logos on the grille and hatch. All of it works to reinforce the message that this isn't the Allroad. Maybe the AllRoadCourse.

The RS6 Avant can pretend it's reasonable family transportation if you relax the adaptive suspension and ignore the button on the steering wheel labeled "RS Mode." But that's a difficult button to ignore. The RS modes (two of them, in ascending order of depravity) are customizable, but both of them sharpen the Avant's responses and generally serve to amplify the fun, even jacking up the idle so the car feels like it's straining the leash when it's stopped. You can, of course, make the exhaust louder by selecting either of the RS modes, but in this car, the rumble out back is always rivaled by the soundtrack from the intake. Turbos normally whoosh. The RS6 Avant's sound like Lord Gorg just exited the airlock of his starship to announce an important revision to the food chain and your new position therein. 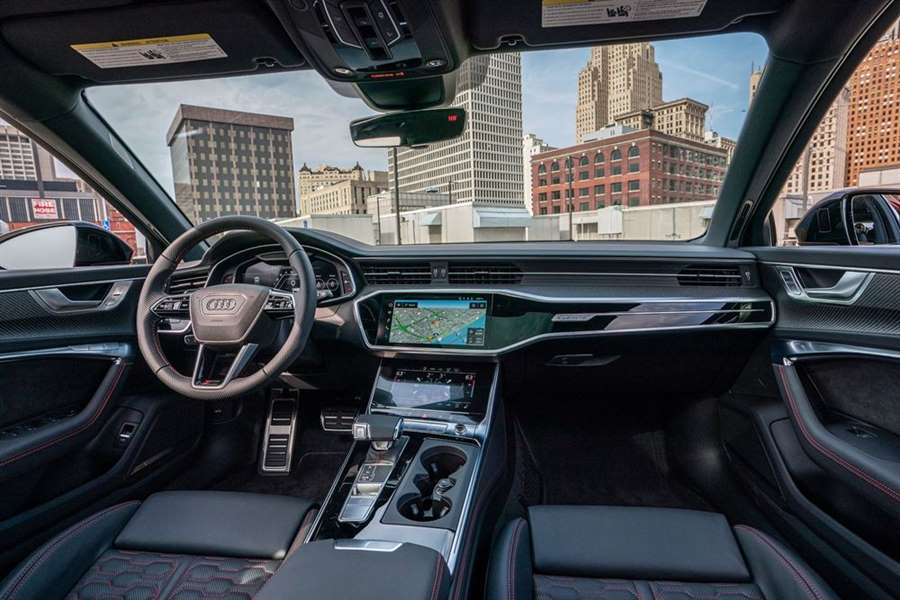 The RS6 drawbacks, such as they are, tend to fall into the category of self-owns. For instance, the RS6's sleek interior touchscreens on the center stack (a 10.1-inch upper display and an 8.6-inch lower one) look minimalist, which is appropriate since they're minimally functional. Why did Audi kill the scroll knob? If you want to change a radio station, you can use the touchscreen, steering wheel buttons, or volume knob toggle, all of which work equally badly. Try to jump more than two or three stations and the system has a CPU fart and freezes where it is. At first we just thought the car really loved Ozzy's Boneyard.

And there's a lot of hardware crammed into that nose. (That's not unprecedented: The 2003 RS6 engine bay was so cramped you had to drop the front anti-roll bar to do an oil change.) Cooling fans tend to run for a long time after you shut down the engine. The fuel economy stinks—17 mpg combined, per the EPA. And top speed is restricted to 156 mph instead of a claimed 190 unless you ante up for the carbon-ceramic brakes, which cost $8500. You're telling us that the standard 16.5-inch front and 14.6-inch rear rotors can't handle 190? That's so unfair we're going to our room and slamming the door.

But we won't stay mad, because the RS6 Avant validates enthusiasts with its very existence. In a world lousy with 600-hp SUVs, we don't have nearly enough 600-hp wagons. Note that we didn't say "affordable 600-hp wagons." Audi says it builds a two-digit number of RS6 Avants per day at its Neckarsulm plant in Germany, but it'd surely make more if it could find a bigger crowd of buyers willing and able to trade tall stacks of hundred-dollar bills for a rally family sport wagon. 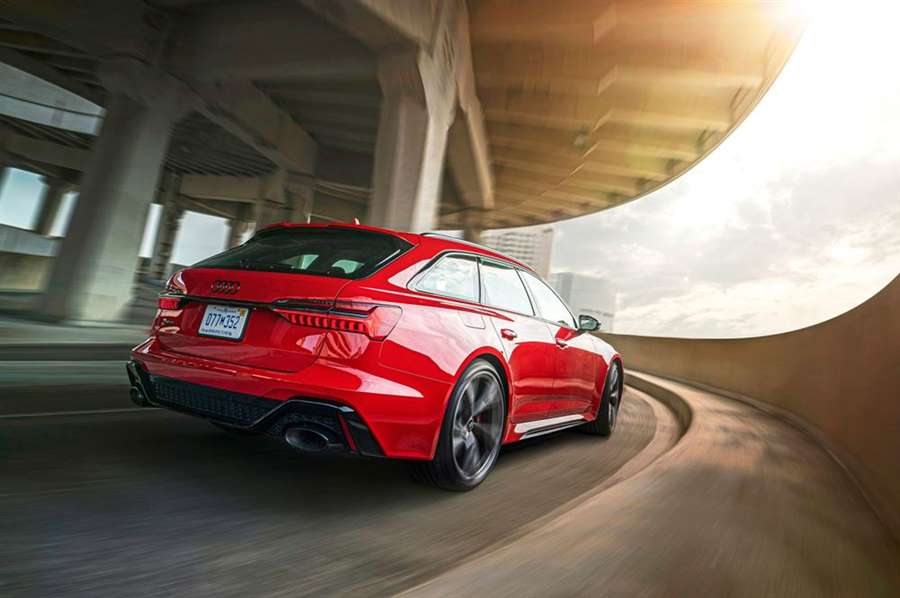 Greatness doesn't come cheap. And left-digit bias, pervasive as it is, has its limits, as exemplified by the RS6's $110,045 base price. It's not like $110,050 is some talismanic psychological threshold for financial responsibility. And in any case, adding a few options quickly bumped our as-tested price to $119,840. But that price looks pretty good when you compare the RS6 with its corporate cousin, the Porsche Panamera Turbo Sport Turismo, which is similarly rapid but costs $158,350 before you so much as color in those crests.

Normally when we argue that there's more to a car than its numbers, we're talking about something like a Mazda Miata, which doesn't look quick on paper but is a joy to drive. The RS6 Avant actually does put up some monster numbers. But the experience is even better.