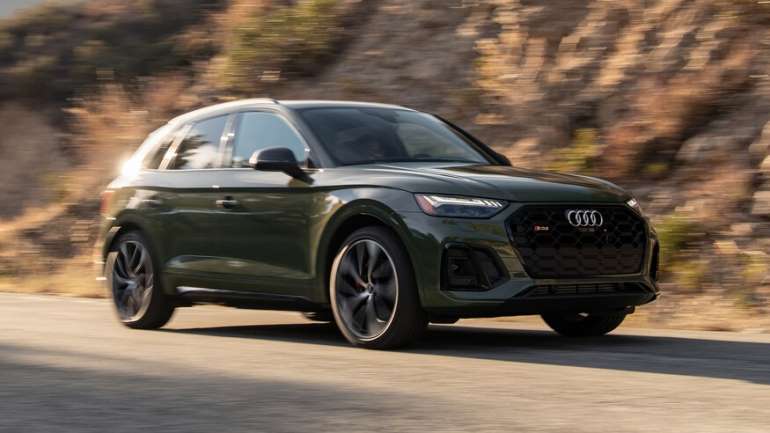 Comfortable when you need it, punchy when you want it.

With SUVs being so popular now, manufacturers have the challenge of fitting multiple models into a multitude of niches to satisfy all kinds of customers. Take Audi, for example, whose Q5 represents about 25 percent of the marque's U.S. sales. Part of that has to do with the model's three very different powertrain variants: the regular Q5 45 TFSI, the gasoline-electric plug-in hybrid Q5 55 TFSI e, and the dynamic SQ5. In the hottest segment of the game, you gotta satisfy everyone. 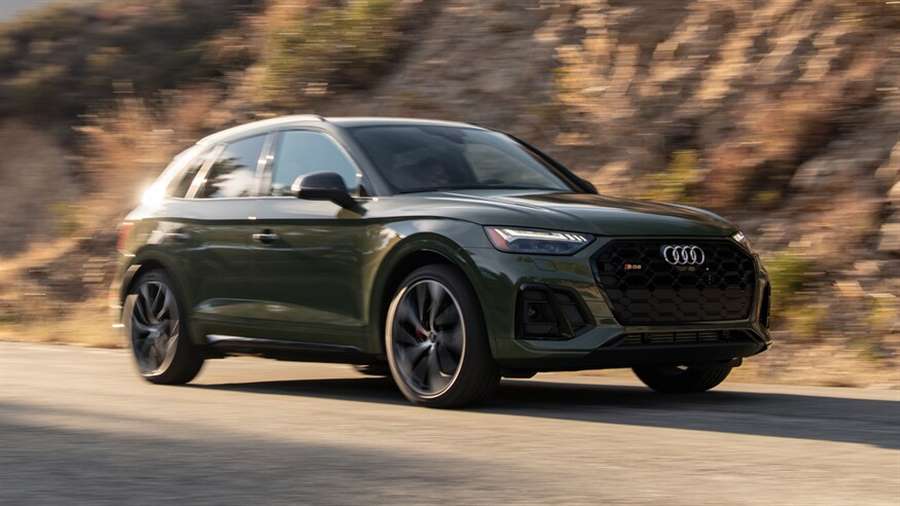 The 2021 Audi Q5 lineup gets a midcycle refresh that slightly changes its appearance inside and out, not to mention slightly boosts the model's performance. The 2021 SQ5, which we'll focus on in this review, improves upon the 2020 model, and after taking it to the track, we can confirm it also handles like a champ on our figure-eight course.

Road test editor Chris Walton was impressed by the SQ5's handling. "Wow! What a delight on the figure eight," he said. "Really, a tremendously fun experience that I was not anticipating. Porsche levels of fun and predictability." 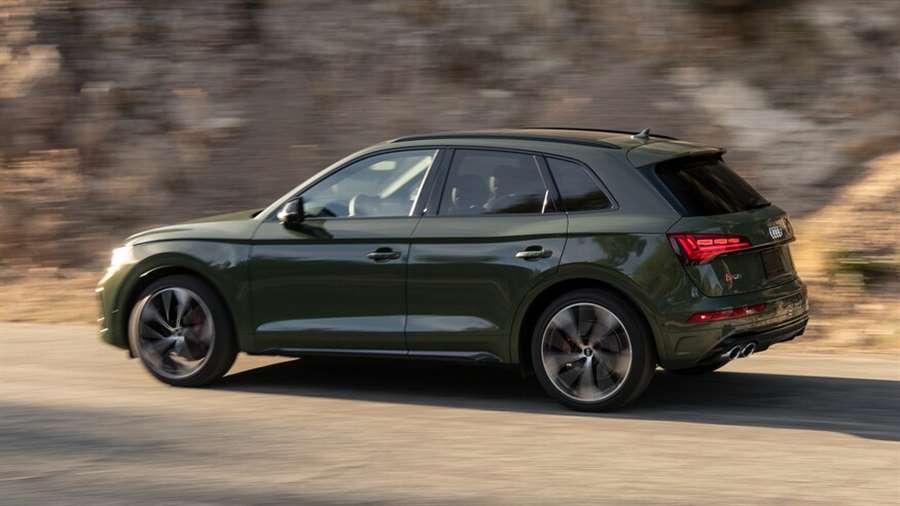 Whether it's on the track or the streets, the 2021 Audi SQ5 is fun to drive. Like we said in our First Drive, the SQ5 feels more like a hot hatch than a hot SUV, with limited body roll and sharp steering response. On twisty roads, the SQ5 leans in nicely, its tires maintaining good grip and giving you the confidence to push the SUV even harder. The low-end torque allows the SQ5 to pull itself out of corners with ease, but the transmission takes a bit of time to downshift, even in Dynamic mode. At least Audi fits the SQ5 with shift paddles, which allow the driver to override the gearbox's lethargic nature.

You're most likely buying an SQ5 because you want more power, but when you want to cruise peacefully, this Audi also delivers. Despite its 21-inch wheels, the SQ5's ride is settled and peaceful on the freeway. When we drove about Portuguese Bend, an area of the Palos Verdes Peninsula in Southern California where frequent land movements perpetually rumple the pavement, we noted the Audi's suspension handled medium undulations well. 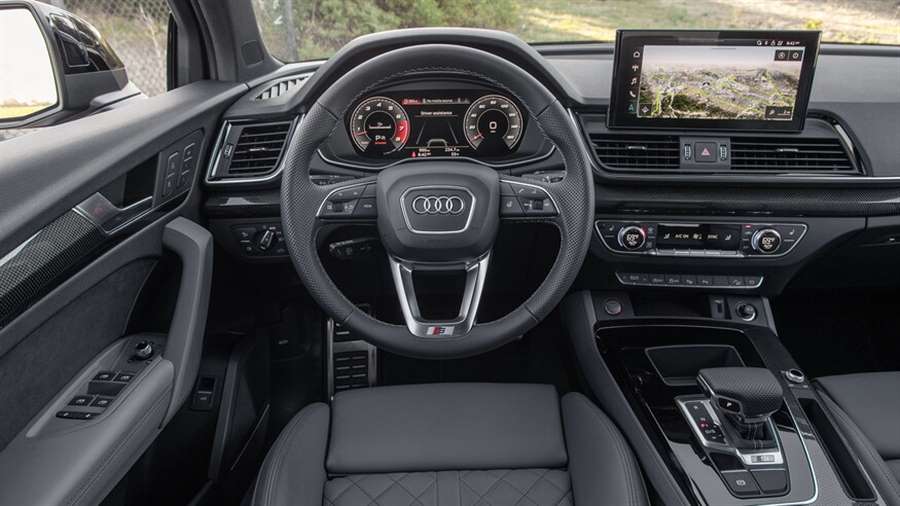 2021 Audi SQ5: Inside The Beast
You'll know you're in the SQ5 thanks to the number of badges located about the cabin. From the steering wheel to the shifter to the seats, the abundant S logos visually differentiate the SQ5 from its less powerful siblings. Besides that, all Q5 and SQ5 models come with the same 10.1-inch touchscreen infotainment system that's compatible with wireless Apple CarPlay and Android Auto. This screen replaces the priorly available 7.0- and 8.3-inch displays and is located within easy reach of the driver. The MIB3 infotainment system is easy to use and fast to respond, and it now adds a voice control system that learns and recognizes natural commands for vehicle controls. 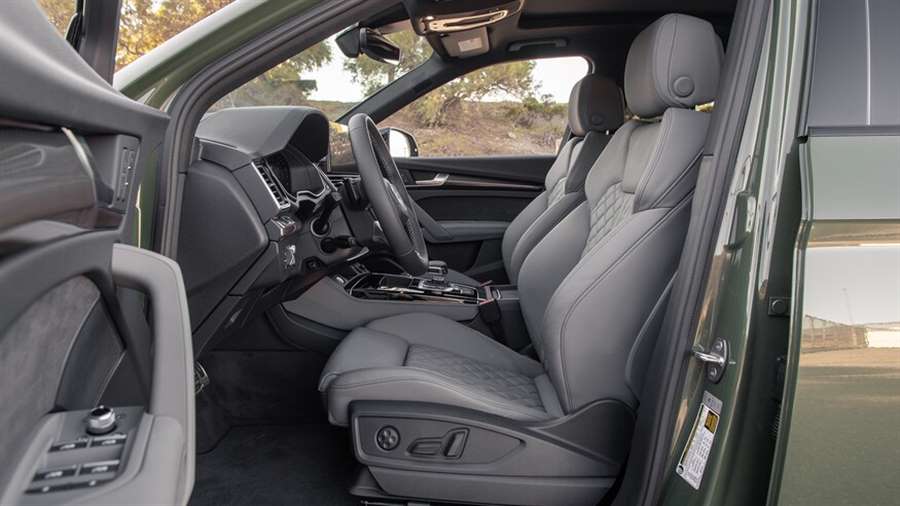 Although the SQ5 (as well as its Q5 stablemates) doesn't get the fancy dual-screen center console found in Audi's bigger models, such as the Q7 and Q8, the cabin still feels tech-savvy. A 12.3-inch digital gauge cluster (or Virtual Cockpit in Audi-speak) is enhanced with a better resolution that makes the setup's Google Satellite images even crisper. Our test car included the Prestige package and came with the optional color head-up display. The 19-speaker Bang & Olufsen premium sound system had us cranking up the volume every time we played our favorite songs.

Interior space is generally decent. The biggest compromise is to second-row foot room due to the bulky drivetrain hump. Other than that, though, there's plenty of space for adults. Rear-seat passengers will appreciate the airy cabin thanks to the large windows, but the biggest downside is that the seats do not fold in a fully flat position. 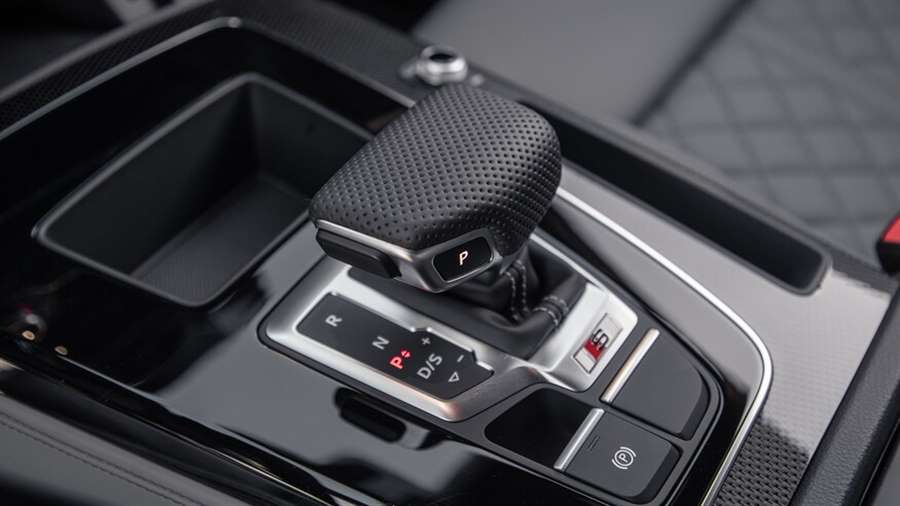 2021 Audi SQ5: Worth The Cost?
The updated SQ5 brings a fresh design inside and out while balancing dynamics and refinement for everyday driving. It's a great option for those who want more punch than the Q5 offers. Plus, with a starting price of $53,995, it's a reasonable value—at least in its base form. Prices escalate quickly, though, with our top-of-the-line SQ5 with the Prestige package stickering for $71,790.

The SQ5's number one mission is delivering a fun driving experience. This Audi not only does that, but it also provides a suave ride when you want it. Few SUVs manage to do this as well as the SQ5 does.

Tagged under
More in this category: « Audi A4 saloon review 2021 Audi RS7 Sportback Gets Caught in a Sibling Rivalry »