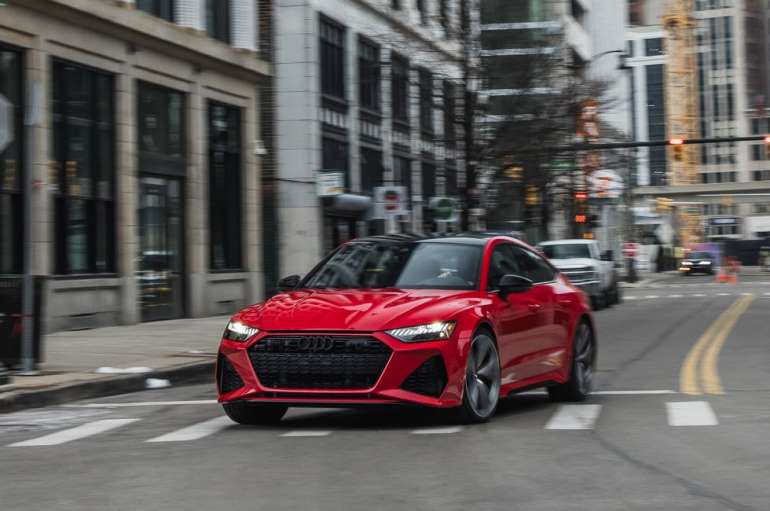 After a brief hiatus from the United States market, Audi's fiery RS7 Sportback returns for 2021 in fighting form. Delivering big doses of both speed and refinement, the new car's stonking performance sacrifices little comfort for its driver. But it's not the only practical hot-rod hatchback that Audi offers these days, and therein lies the RS7's greatest issue. 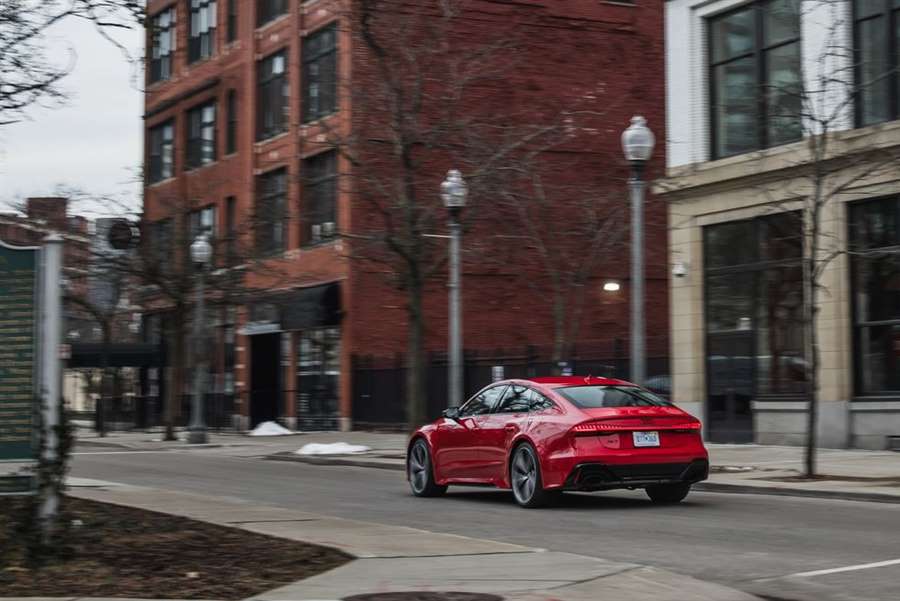 HIGHS: Effortless speed, impressive ride comfort, menacing curb appeal.
The new RS7 is once again motivated by the Volkswagen Group's venerable—and versatile—twin-turbocharged 4.0-liter V-8 that also can be found under the hoods of various Bentley, Lamborghini, and Porsche models. Output in this version is a strong 591 horsepower and 590 pound-feet of torque. If those figures sound familiar, that's because they're the same as those of the Audi RS6 Avant station wagon, which is mechanically identical to the RS7 yet offers more cargo space—30 cubic feet versus the RS7's 25. We also think the longer-roof RS6 looks better, but we're suckers for wagons. Compared to the previous RS7, this 4.0-liter wears turbos featuring larger compressor wheels. Thanks largely to an additional 2.9 pounds of boost over the previous standard model, the RS7's horsepower and torque ratings swell by 30 and 77, respectively. As with the RS6, the RS7 features a conventional eight-speed automatic transmission and standard all-wheel drive, or Quattro if you're into trade names. 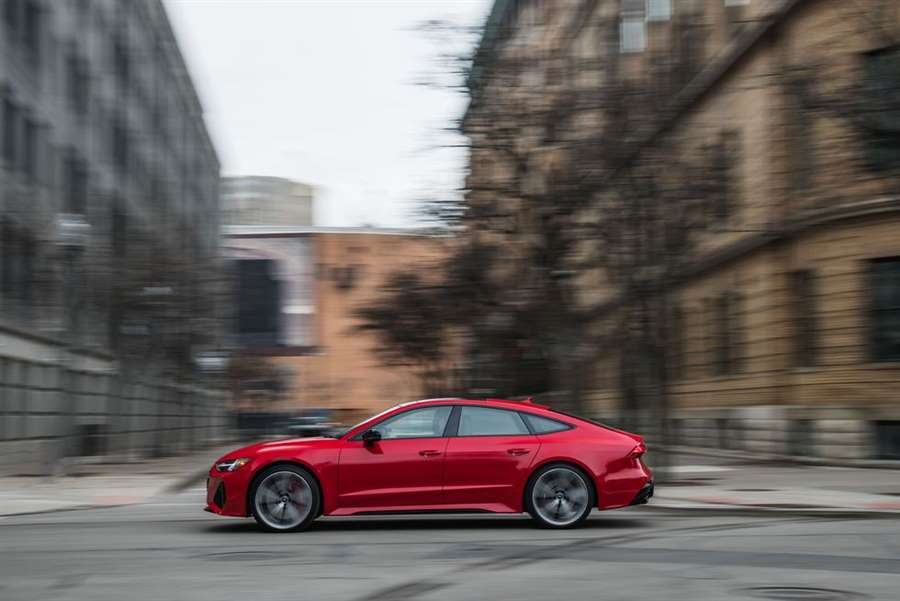 Audi RS7 Has Dynamite Looks and Big Power
On paper, the latest RS7 is not as impressive as its predecessor's hottest variant, the 605-hp RS7 Performance. Yet, despite the new car weighing an additional 460 pounds, it can catapult its 4947-pound girth to 60 mph in a mere 3.0 seconds, which is a tenth of a second quicker than before. Stay on the throttle and it posts a similar 11.3-second quarter-mile time but with a 3-mph slower trap speed (122 mph), which is indicative of its extra bulk. The 2021 RS7's porkiness is also on display in both the 30-to-50- and 50-to-70-mph top-gear acceleration tests, where it trails the RS7 Performance by 0.4 and 0.5 second, respectively. Well, pokiness or a less aggressive transmission map. For comparison, the RS6 Avant gets to 60 in 3.1 seconds and covers the quarter-mile in 11.5 seconds at 120 mph. 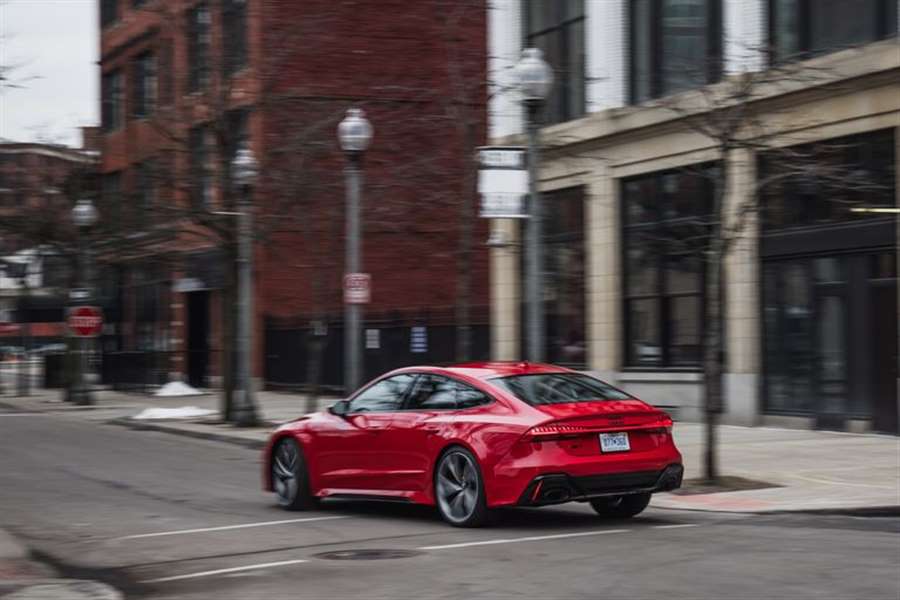 LOWS: Subdued exhaust note, seriously heavy, an RS6 Avant is both cheaper and more practical.
Making the most of the RS7's acceleration on the street is easy, thanks to a neat trick we discovered with the car's advanced electronics. When fitted with Audi's Intersection-assist feature (part of the $2250 Driver Assistance package), the RS7 communicates with intersections that are V2I (vehicle-to-infrastructure) compatible. Activate this at a stoplight and a countdown timer illuminates in the standard 12.3-inch digital instrument cluster, indicating when the light will turn green. Depress one of the RS Mode buttons on the RS7's steering wheel to summon launch control and the car's customizable drive modes, stand on the brake and accelerator, and then release the brake for a max-thrust hole shot. 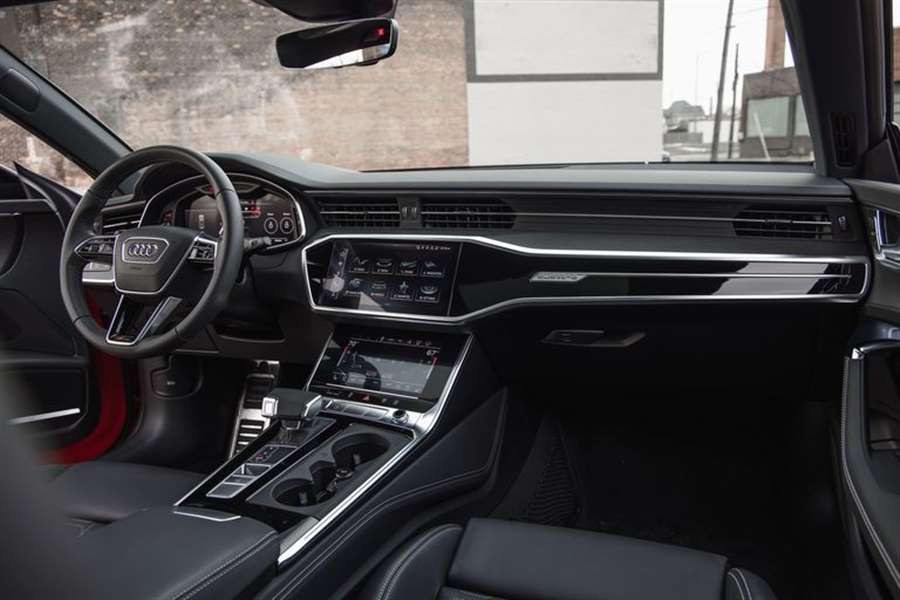 The RS7 is more than a stoplight racer, though. With broad shoulders that are 1.7 inches wider than the lesser S7's, plus its blacked-out maw and exterior trim, this Audi looks stunningly mean. But it also grabs attention, which is problematic when triple-digit speeds can be summoned almost by thought. That it also brings an impressive level of refinement doesn't help matters. We imagine much of its weight gain comes from significantly more sound-deadening material, as our test car's calm and serene cabin reduced the full-throttle noise from the $1000 Sport exhaust to a distant, 79-decibel bark. Ride comfort on the optional 22-inch wheels with 30-series Pirelli P Zero PZ4 summer tires is excellent, the standard air springs shrugging off even the worst of Michigan's poorly maintained roads.

Despite carrying 56.1 percent of its mass on its front wheels, the RS7 feels surprisingly balanced. When pushed hard into corners, the standard rear-wheel steering helps its driver maintain a smooth, tight line by rotating its rear end. Its ability to change directions is bolstered by a torque-vectoring rear differential, which helps with yaw by splitting the rear axle's torque unevenly. In Dynamic mode, the RS7 hunkers down by 0.4 inch and circles the skidpad with a solid 0.95 g of lateral adhesion. When it's time to slow down, massive 16.5-inch iron front rotors clamped by 10-piston calipers effortlessly shed the car's forward momentum. Stops from 70 mph take a scant 151 feet. While our car didn't feature them, carbon-ceramic brakes are available for $8500 and have the added benefit of upping the governed top speed from 155 mph to a claimed 190. 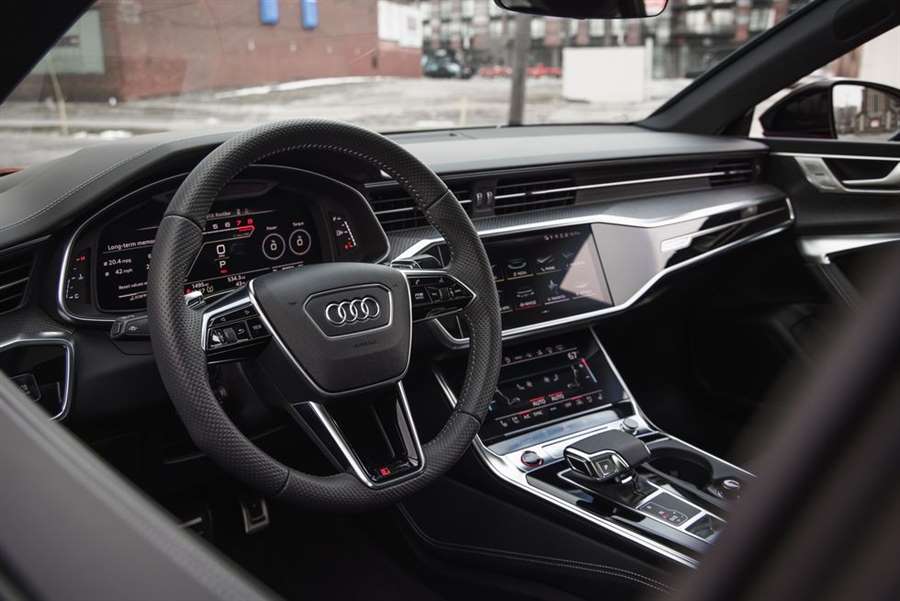 The performance and presence of the Audi RS7 is intoxicating enough for us to almost forget that the RS6 Avant exists. But one glance at the RS7's $115,045 base price puts the two cars in perspective. For $5000 less, Audi's RS wagon posts nearly identical performance results, has seating for five versus the RS7's four, and is more capacious in back. For those smitten with the RS7's sleeker profile, it is an awesome machine. But we know where our money would go.