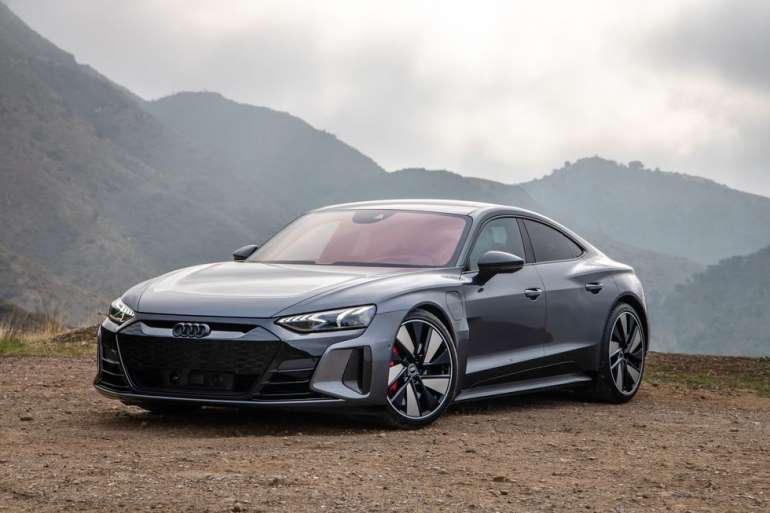 As Audi's version of the Porsche Taycan, the new RS e-tron GT is an exciting, Tesla-chasing ride.

To make sure the 2022 e-tron GT stands out among the brand's other electric offerings, Audi asked sound engineers to develop a new soundtrack specifically for the e-tron GT and RS e-tron GT models. Before you go looking for it on Spotify, we'll tell you that this "song" is played just for the e-tron driver. It's a sort of intergalactic hum that transforms into a turbine whoosh as you accelerate. It says, "I am the future," and it'll have you thinking dilithium crystals and calling a Scottish engineer to see how everything is going, but it's not quite right for the e-tron. 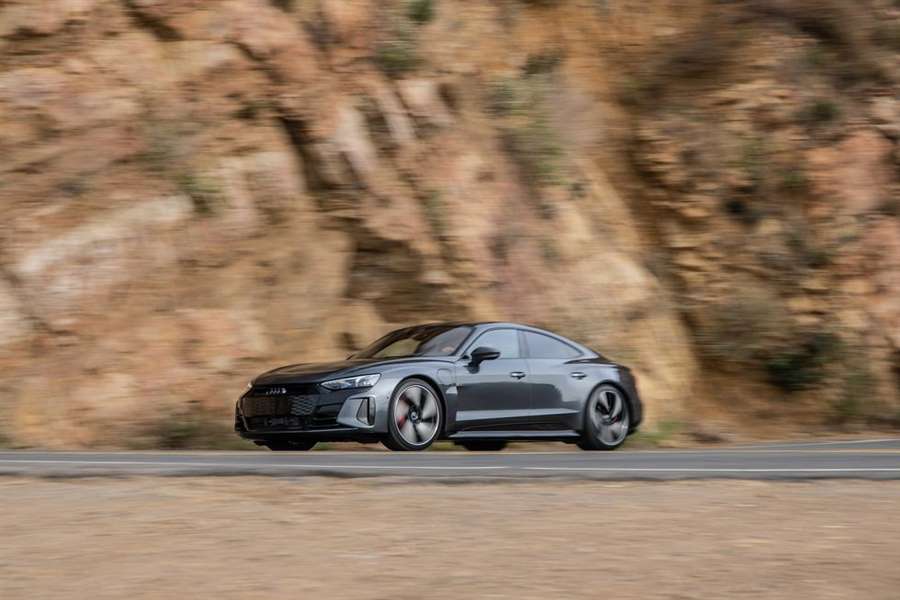 Audi’s 2022 RS e-tron GT Adds More Speed to the GT
The e-tron GT has a twin at the Porsche dealer. The e-tron shares its platform, 800-volt electrical architecture, front and rear electric motors, two-speed automatic transmission at the rear axle, air springs, and all-wheel steering with the Porsche Taycan. While the Taycan offers a single-motor, rear-wheel-drive setup as well as the dual-motor-driven AWD 4S, Turbo, Turbo S, and Cross-Turismo, at least for now, the all-wheel-drive GT comes two ways, the 522-hp e-tron GT and the 637-hp RS e-tron GT. Accessing all of those horses requires using launch control, and then you only get the power for 2.5 seconds. 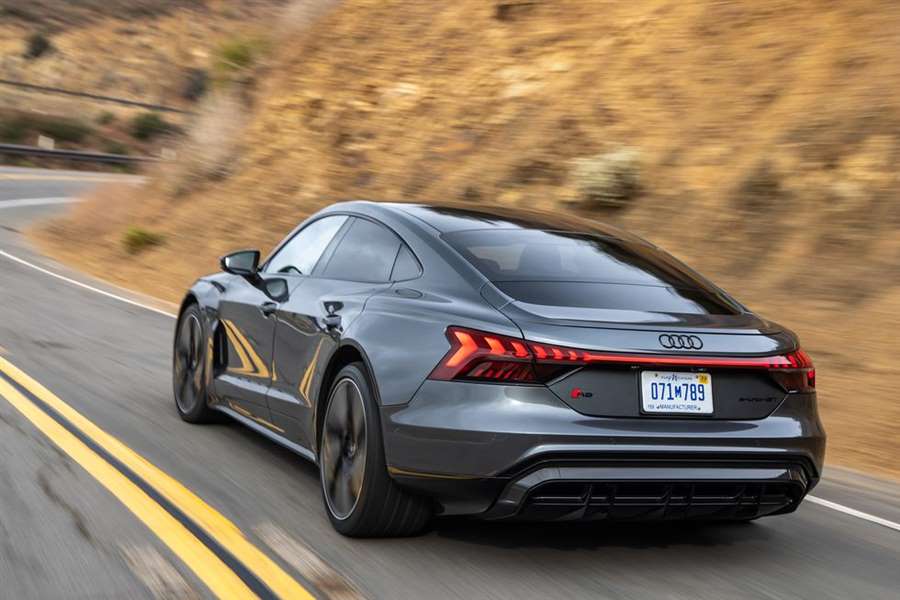 With typical use, you get a still heady 469 horses in the GT and 590 in the RS. The difference is one you're unlikely to miss on your drive to work. Audi's acceleration claims back up the roller-coaster feeling. Audi claims the base GT will hit 60 mph in 3.9 seconds with the RS reducing that to 3.1 seconds. While those numbers are important, the e-tron GT and RS's range figures will likely mean more to buyers. EPA numbers aren’t ready yet, but Audi estimates 238 for the regular version and 232 for the RS. That's not the sort of range that leads to bragging, especially if the conversation turns to Teslas.

On the road, the RS GT tours grandly. It hums and hauls so smoothly that the big numbers on the speedometer readout might come as a surprise. The low, hefty weight of electric cars works in their favor when it comes to stable cornering, and 590 electric horses are more than enough to reshape your eyeballs. The GT's biggest challenges come from not having the longest range and not being the quickest or flashiest thrill ride in the park. 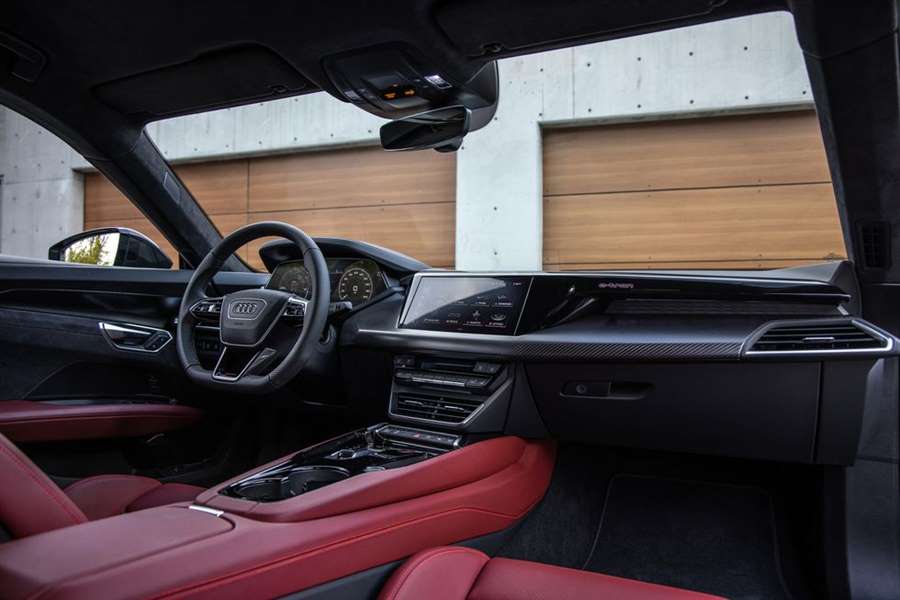 Audi gets points for using the steering-wheel paddles to control regenerative braking. It's just the sort of setting you might want to change on the fly, say, heading down a steep hill or coasting along in highway traffic, and being able to adjust it without having to dive into a settings menu is smart. The middle setting will feel the most familiar to gas-engine aficionados, and the max regen is almost but not quite aggressive enough to allow for one-pedal driving. The RS we drove had optional rear-wheel steering as well as the standard dynamic steering, so not only was the steering ratio changing depending on our speed, the rear wheels also turn to stabilize at high speeds or reduce the turning radius in parking lots. Steering efforts are light, almost too light at slow speeds, but once you get used to it, you'll be flipping tight U-turns just for the fun of it. 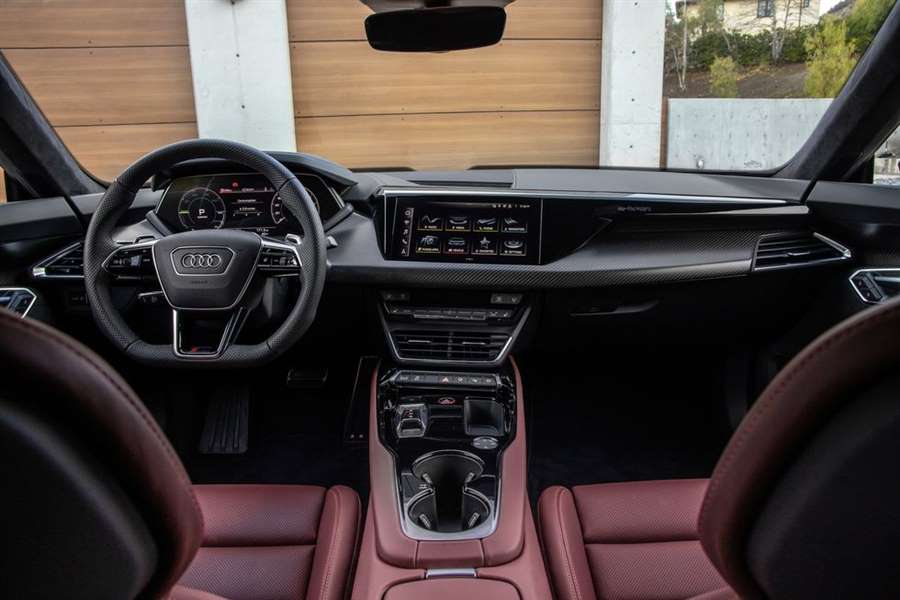 Audi tilts the controls towards the driver, and everything you need is within easy reach. EVs have conditioned us to expect tech-focused or even minimalist interiors. The GT has a crisp digital display in front of the driver and a 10.1-inch touchscreen in the middle of the instrument panel, but there are—gasp—buttons for the climate control.

The GT does play into another electric-car expectation, however, that of the environmentally conscious and possibly vegan buyer. Leather-free interiors and recycled materials come standard, but if you want to sit on cow hides you can order up a less vegan-friendly version. Whether your seats were once alive or never alive, the GT supposedly seats five; just be sure to call shotgun. No one will enjoy the middle seat in the back. Legroom for the outboard rear seats is excellent thanks to cutouts in the battery, which mean deeper pockets for your tootsies. Headroom isn't as generous, as you pay for the stylish sweep of the roof with tiny back windows and an encroaching C-pillar. 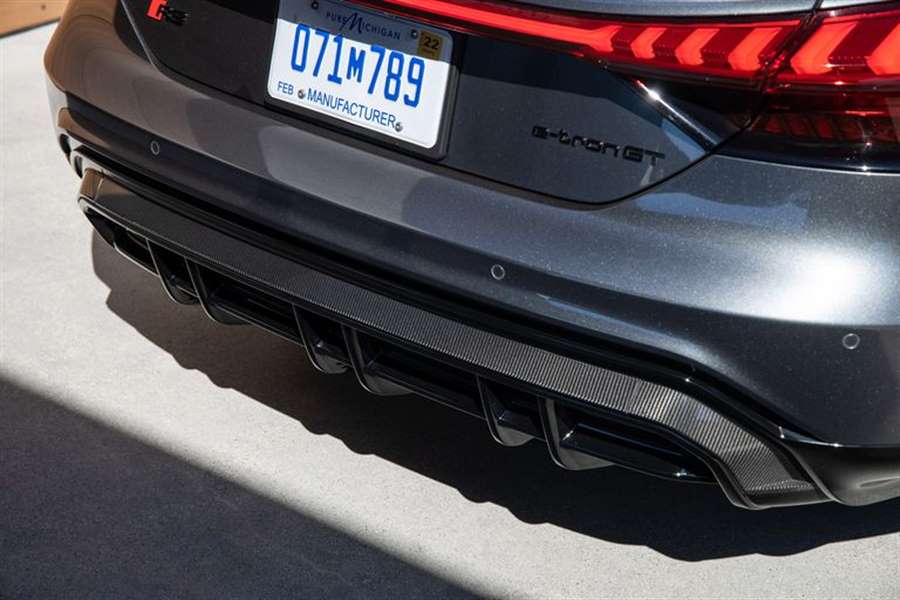 Audi's brave new EVs start at $100,945 for the e-tron GT, a price that lines up with the similarly quick Taycan 4S. Bring a $93,190 check to the Tesla store and you'll drive away in the much quicker Model S Performance AWD. The RS version, with its carbon-fiber roof and extra power, starts at $140,945. That money would put you into an 1100-hp Model S Plaid+ AWD, which is likely to be the quickest EV when it actually reaches buyers.