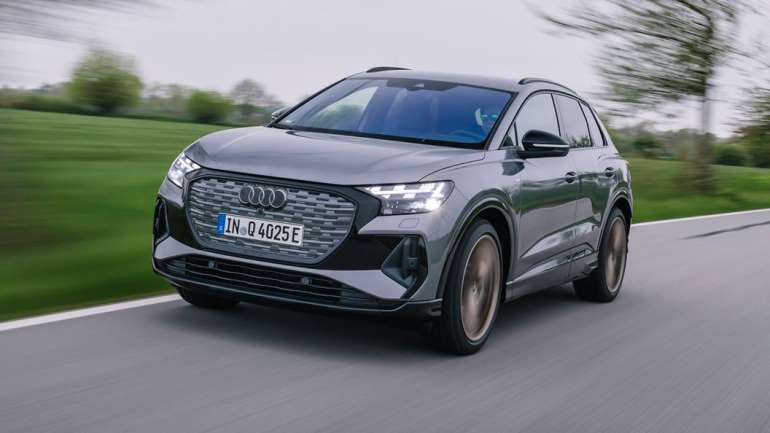 You know how they say never buy the first version of a new Apple product? Perhaps a similar golden rule should be applied to electric cars.

The first model based on the VW Group's entry-level electric platform, the VW ID.3 released last summer, had a premature, unfinished edge to it. But every new MEB derivative launched since then has bettered the previous version. The ID.4 is quantifiably more appealing than the hatchback, the Skoda Enyaq is more convincing overall than both Volkswagens, and now the Audi Q4 e-Tron raises the bar for looks, perceived quality, driveability and performance.

Before we get into that...

Yes, some headline specs. Built in Zwickau on the same line as the ID twins, Audi's entry-level e-SUV is also offered in Sportback guise, with a slightly more coupe-like shape and a drag coefficient of 0.26. In the UK, prices for the Q4 e-Tron start at £40,750, and for the quattro version begin at £51,370. Sportback pricing has yet to be confirmed. but expect to pay a couple of grand more. 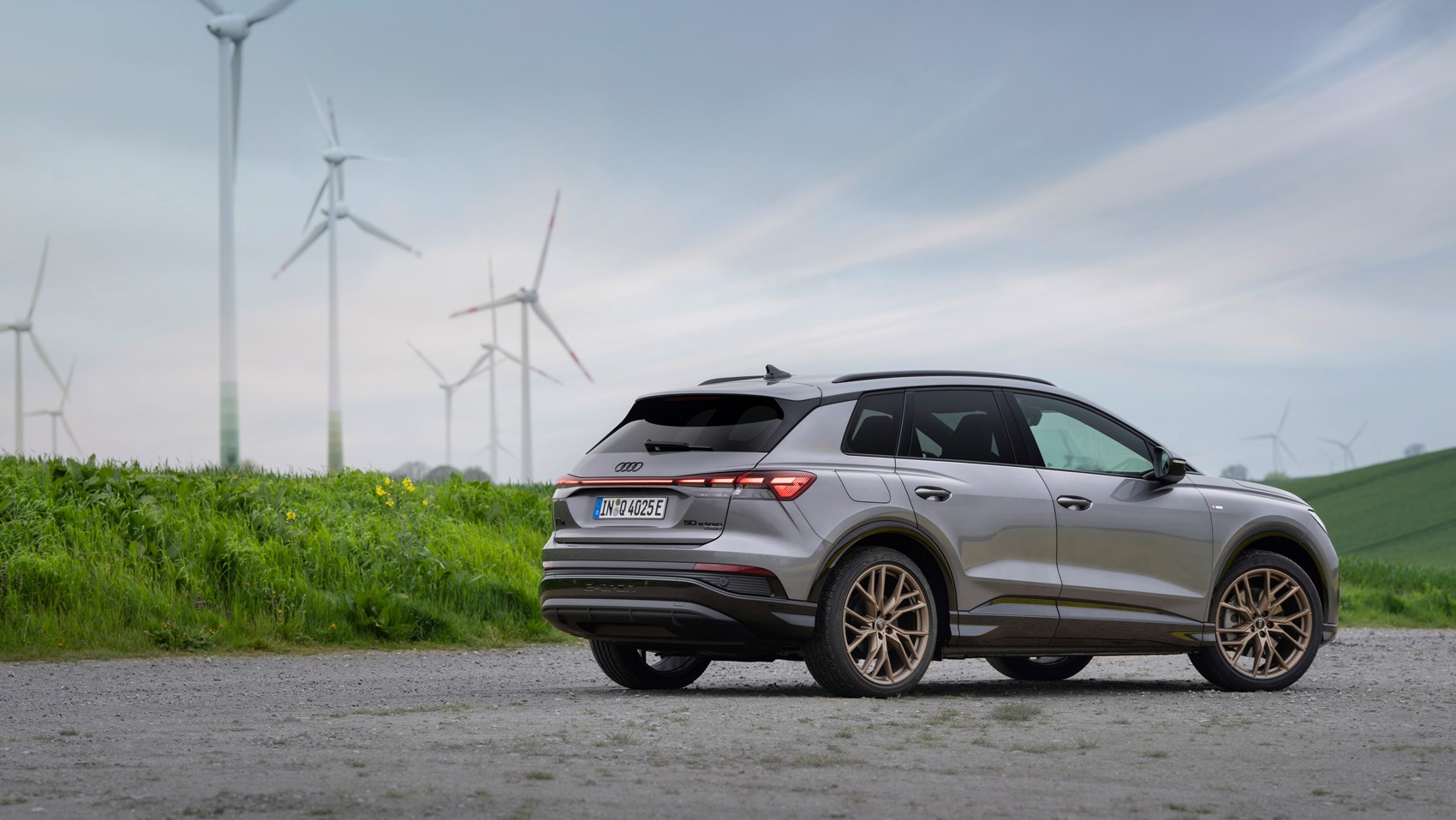 The line-up available at launch time consists of two rear-wheel-drive versions, the '35' and '40', rated at 168bhp/229lb ft and 201bhp/229lb ft as well as the 295bhp/339lb ft quattro edition, the '50', which sports a bigger 77kWh (net) battery, and a second motor ready to drive the front wheels should traction issues or performance itches arise.

We're driving the 50 quattro here. The 295bhp Q4 manages to win the 0-62mph acceleration derby against the 308bhp e-Tron SUV by 6.2 against 6.8sec. More important still, its maximum range of 305 miles compares favourably to the 213 miles recorded to WLTP rules for its bigger brother. 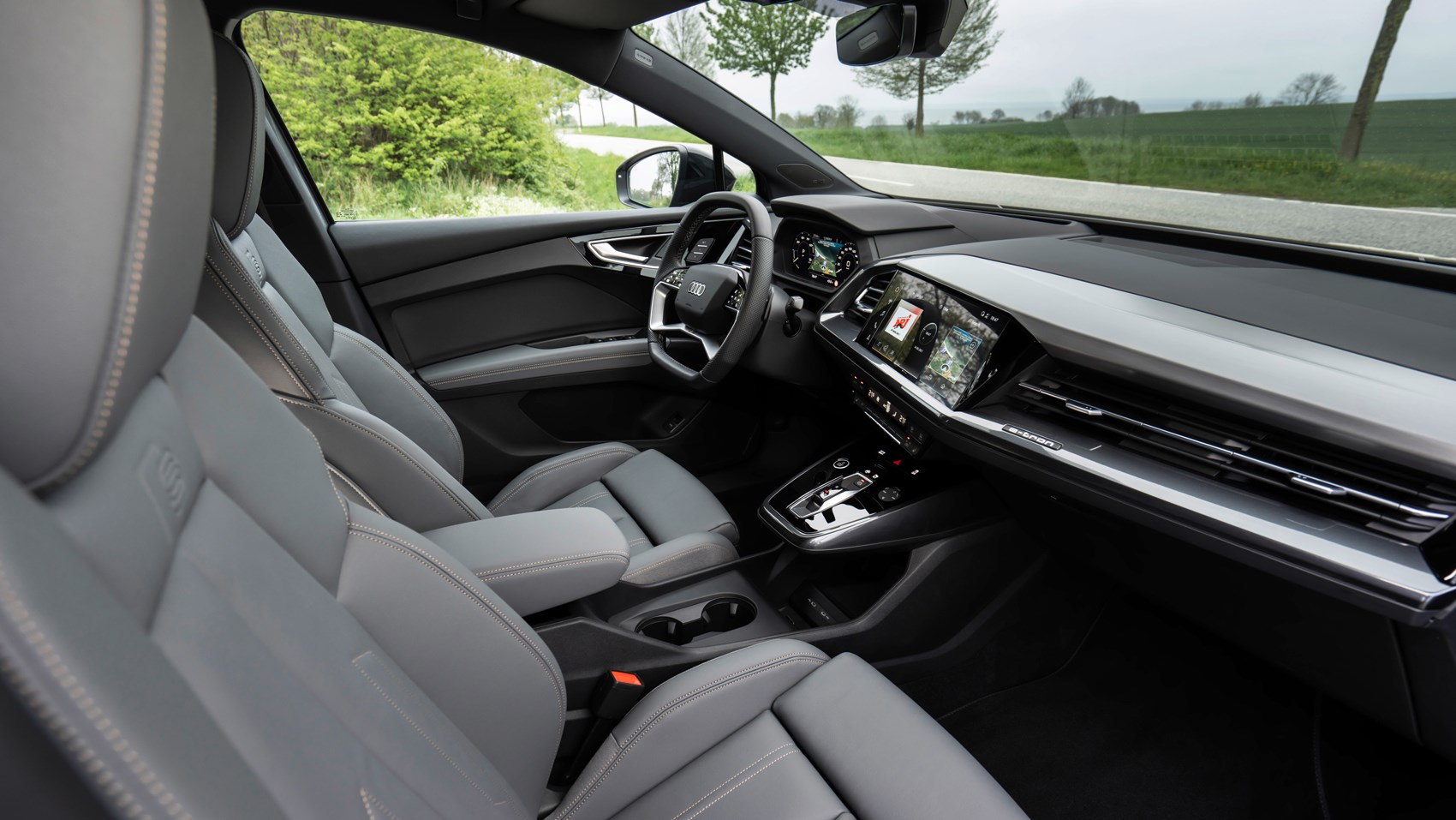 While the smaller 55kWh (42kWh net) energy pack installed in the 35 e-Tron can be charged with up to 100kW, the 40/50 e-Tron accept a maximum dose of 125kW. A 10-minute plug-in stint typically extends the range by 80 miles. The official consumption spectrum ranges from 3.0 to 3.8 miles per kWh, which barely differs from the e-Tron GT.

What else makes the Q4 e-Tron stand out?

Surprisingly, the electric counterpart of the Q3 even beats the pricey e-Tron GT as far as interior design and the overall craftsmanship are concerned, not to mention the fact that the top-of-the-line Q4 50 e-Tron quattro costs over £10k less than the base full-size e-Tron SUV, which is 300mm longer but not dramatically roomier inside. 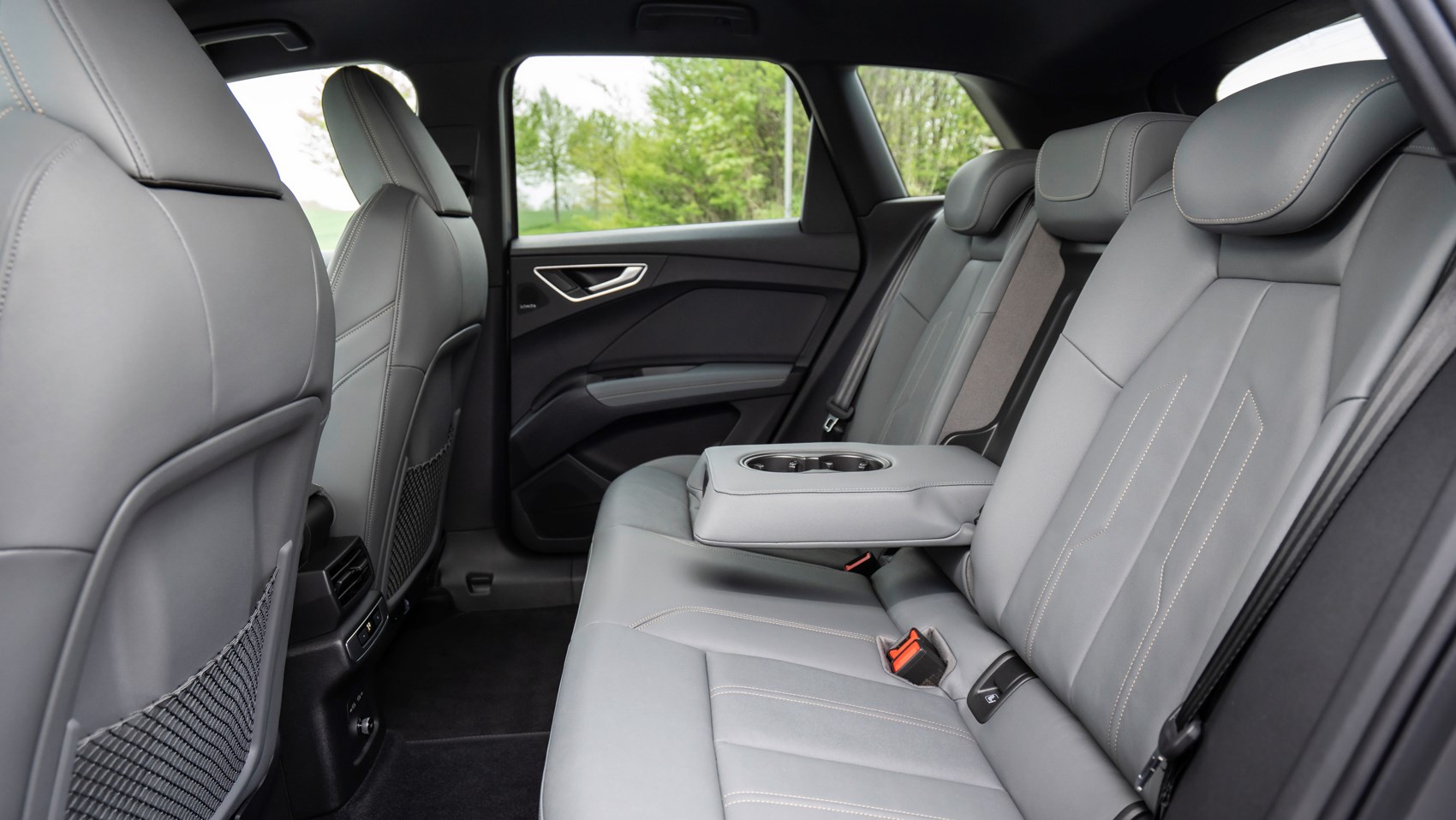 The Q4 cockpit, then, is a class act, with some exceptions: the silly iPod volume control, the available quartic steering wheel (again, standard with the top two trims) and the unpadded armrest and centre console where long legs typically come to rest. Up front, there is enough room to swing a tiger kitten, space in row two is also generous, visibility is panoramic (less so in the Sportback), and the top-notch surfaces which used to be typical of the brand until the arrival of the latest A1 and A3 are back in full force.

In contrast to the confusingly alternative ergonomics pioneered by the ID.3, the Audi brings back the classic direct-access temperature controls, puts the gear selector back where it belongs and reduces the number of vague touch sliders to a minimum. Depending on the depth of your pocket, there are up to three different (and largely redundant) displays to select from. On top of this all, voice control attempts to guide you through a vast variety of menus and sub-menus. Less might be more.

How does the Q4 drive? 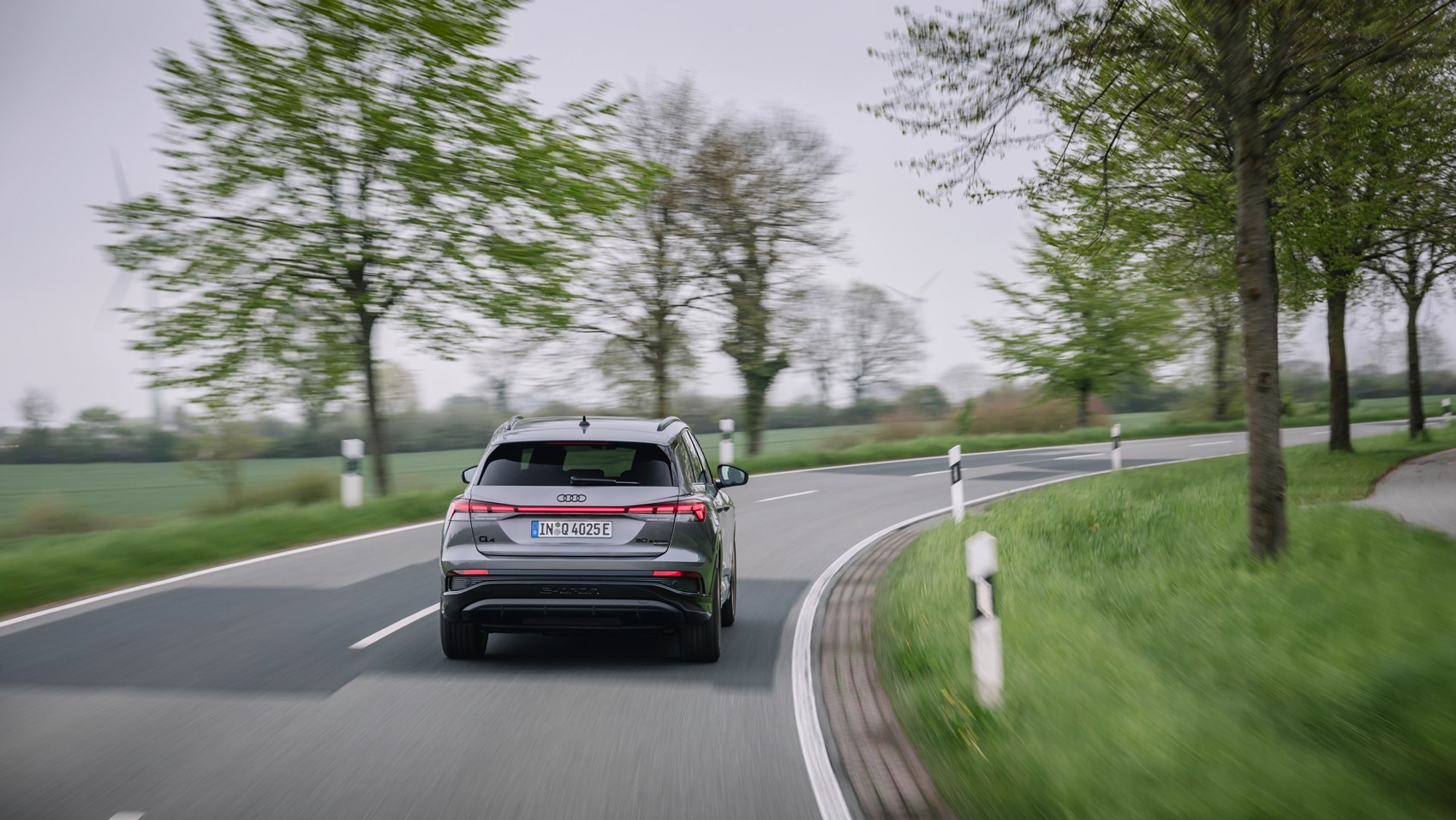 The Q4 e-Tron's more muscular stance also supports a more eager turn-in action than other MEB-based cars, a more neutral cornering balance and a smoother driver-to-car interaction. Our Q4 50 e-Tron 50 quattro refrained from picking a fight with every pothole in reach, wriggling its shoulders when straddling aquaplaning grooves and jarring the driver's palms in the wake of gaping expansion joints.

Although Skoda and VW have announced all-wheel-drive versions of their MEB cars, the Q4 quattro is actually the first of its kind to come to market, available this summer. Along with more power, it introduces adaptive torque vectoring to the handling sweepstakes, and its variable dynamic weight distribution makes the car more chuckable through fast zig-zag corners. The two propulsion units orchestrate the wheel-selective quattro system, which minimises understeer and oversteer while cementing directional stability even on tricky surfaces. 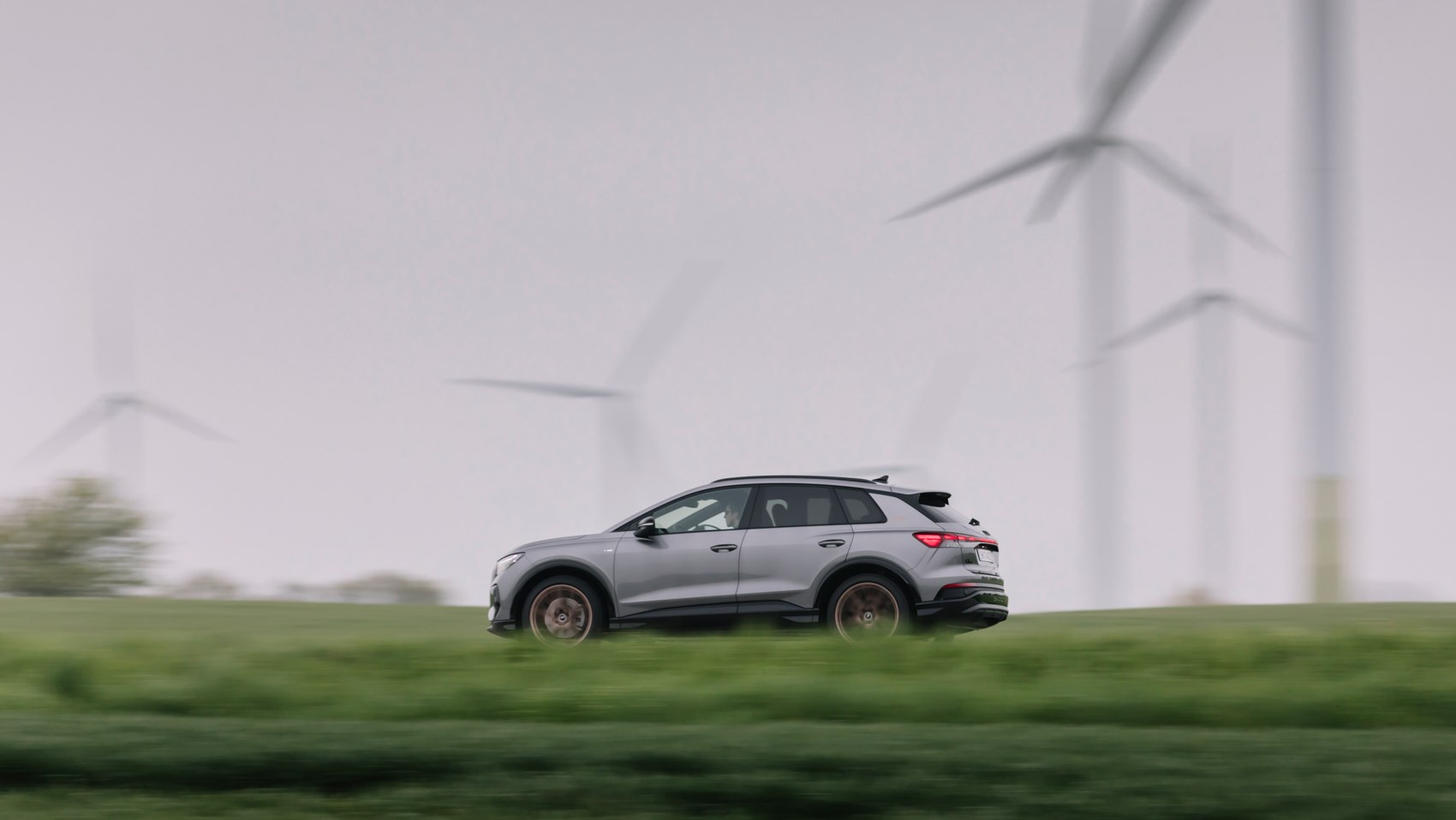 Our test car was shod with optional 235/255 21 tyres, the ride was (with the adjustable dampers locked in Comfort) commendably supple even at low speed and over sudden transverse disturbances, while the steering is nicely progressive. The Drive Select system invites you to set the helm, both motors and the torque distribution in your choice of Comfort, Auto, Efficiency, Individual or Dynamic modes, but is in effect more of a gimmick than a real bonus with the exception of the Range and Efficiency programmes, which seriously curb consumption by limiting maximum speed.

Well, there's Audi's Predictive Efficiency Assistant. It's been on Audi models from the moment the current A6 arrived, and naturally evolved for the electric age. It monitors the real-time traffic flow and road signs via its sat-nav connection. 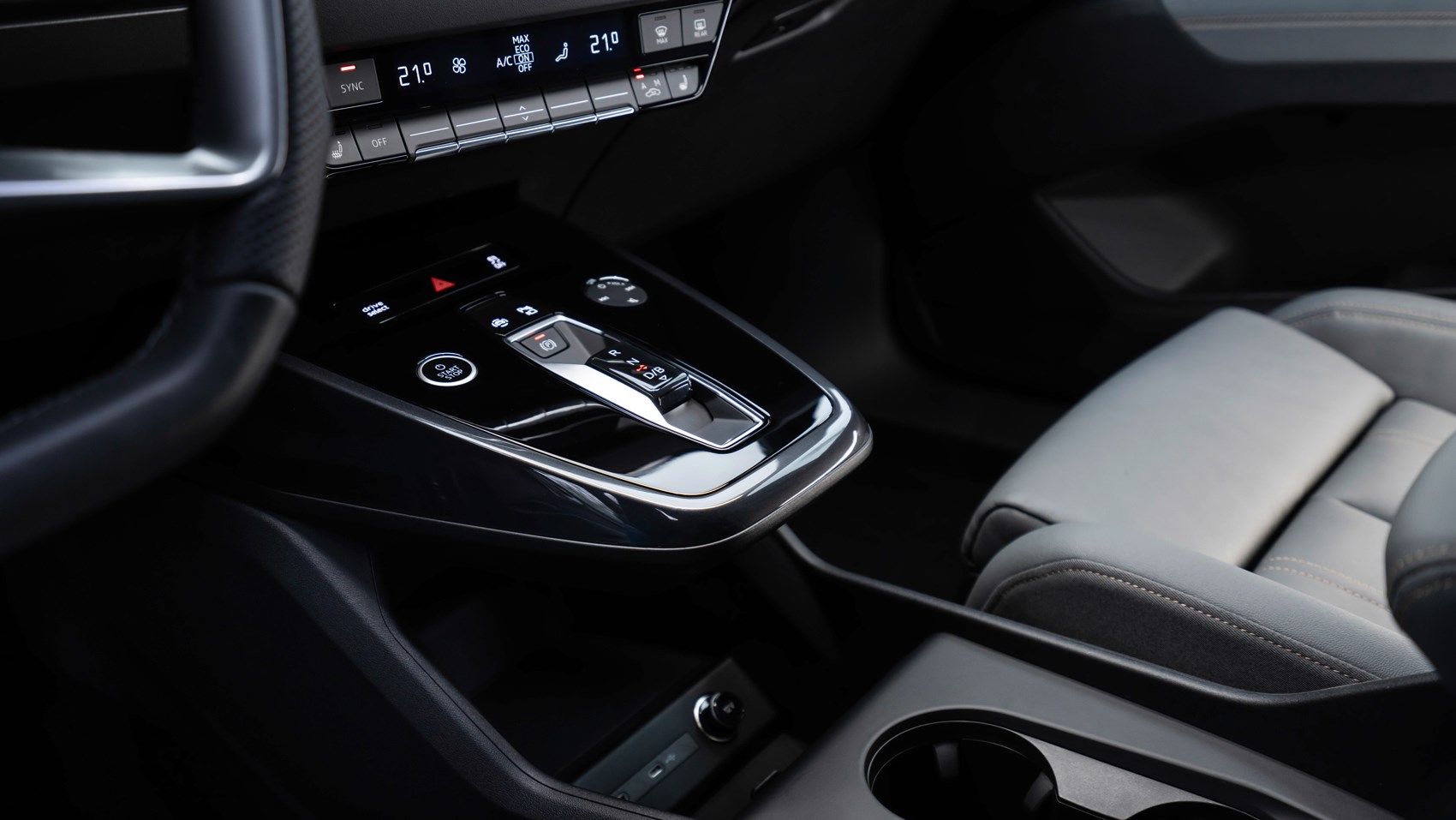 Stick the gearlever (or is it more of a nodule?) in B and the Q4 will automatically recuperate with up to 145kW, which practically puts the brakes on the dole. In D for Drive, paddles (standard on Edition 1 and Vorsprung versions, optional on Sport and S-line) make it easy to select one of three regeneration stages, or to choose the overly cautious automatic programme.

The Q4 e-Tron hits the trendy new targets of EV ownership (range over power, charging speed over top speed) with aplomb. Its footprint is small enough for it to pass as planet-friendly urbanite and to calm the social acceptance watchdogs. At the same time, it can be customised to the taste and budget of a rich person ready to jump from the combustible past to the electrified future. 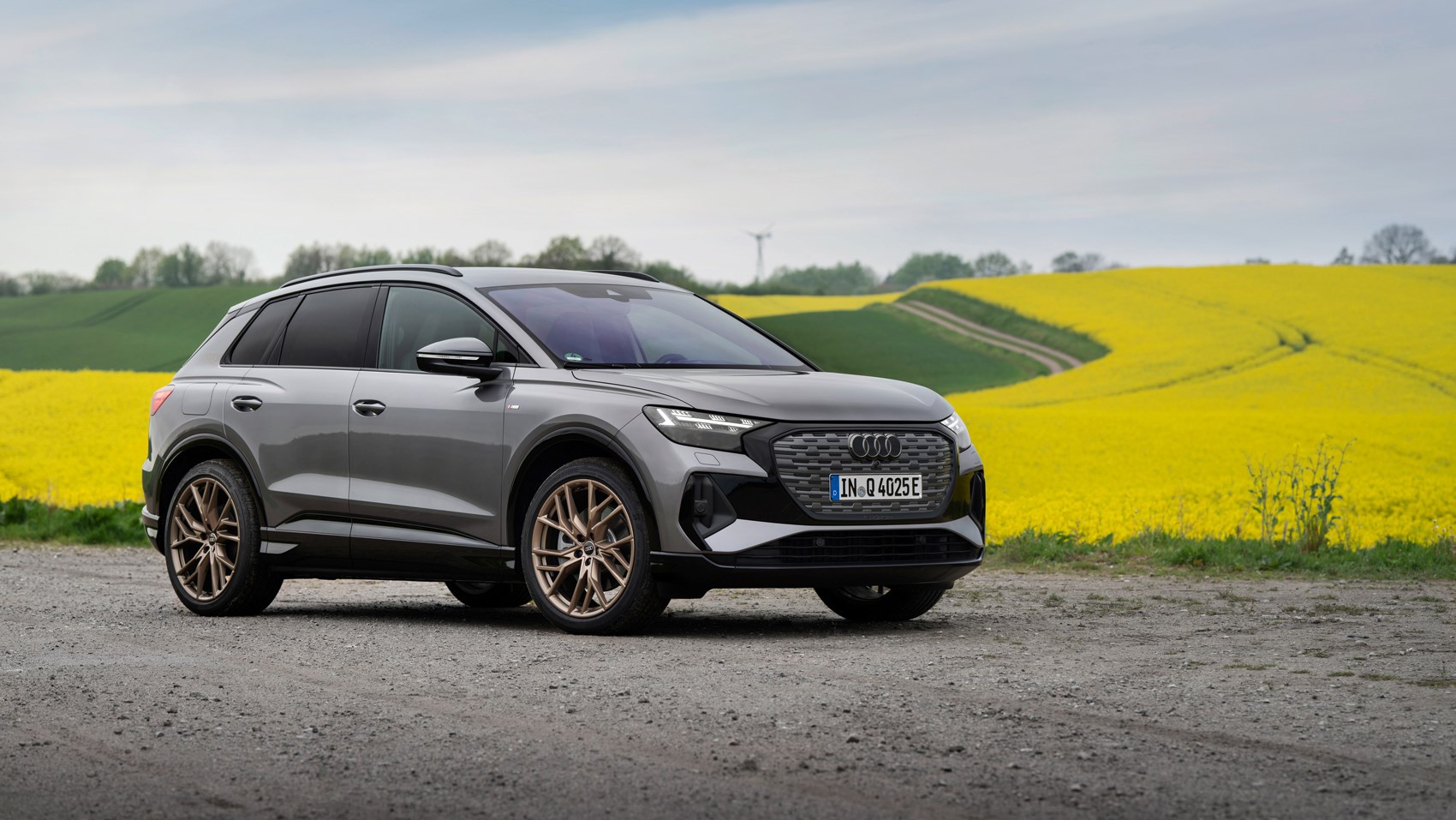