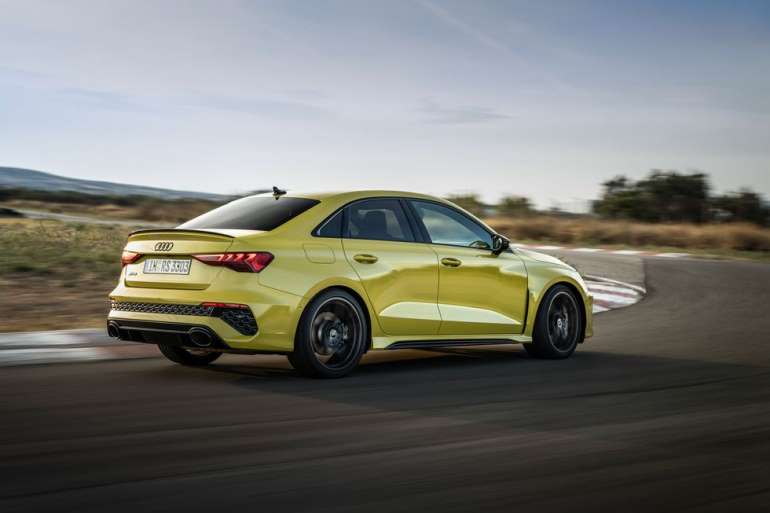 With 401 horsepower available—one pony more than before—the RS3's boosted five-pot pulls hard to its 7000-rpm redline with fervent glee. To say that it has character is an understatement—delightfully vocal and charismatic, this is an engine that can seem uncannily human across its rev range. Which makes sense, as its odd-cylinder warble is a sound that any human could impersonate. A new active exhaust delivers even more of that aural drama through the tailpipes. Normally we eschew engine-sound augmentation through stereo speakers, but it only adds to the excitement in the RS3. Windows up or down, this Audi will have you searching out tunnels on your daily commute.

Torque is up as well, now peaking at 369 pound-feet versus the outgoing model's 354. That twist is routed through a seven-speed dual-clutch automatic transmission featuring several shift programs, including launch control. Audi estimates the sprint to 60 mph will take 3.8 seconds. But that's surely a conservative figure, as the last RS3 we tested, a 2017 model, posted a 3.5-second run to 60 mph. Driving the new car, we found its transmission to be eager to drop down a gear with just a touch of the accelerator, but it's not as prescient under heavy braking into corners, sometimes requiring a tug on the steering wheel-mounted shift paddles to kick it down a ratio.

For even greater control, it's easy to change the gearbox's demeanor through the various drive modes, which also alter the engine's responsiveness, the weight and feel of the steering, and the firmness of the adaptive dampers. We bypassed the Efficiency and Comfort settings, finding Auto to be nicely adept at adjusting the parameters based on our driving habits. Dynamic mode heightens all the car's senses and holds gears at redline in manual mode. Most intriguing was the customizable RS Performance mode, which for the first time in the RS3 allows the amount of torque sent to the rear wheels to be adjusted. Audi's Quattro all-wheel-drive system is almost too effective in most cases, wrangling the engine's might in a deliberate, almost clinical fashion. But the RS3's all-wheel-drive system is designed to be a frisky complement to its engine's sonorous antics. The system employs two independent clutch packs that can route 100 percent of the torque sent to the rear axle to either rear wheel, helping the car rotate around corners.

There's even a dedicated RS Torque Rear mode in the car's Drive Select menu, which is a drift mode in all but name. In practice, however, this setting only lets you wag the RS3's tail so much. Despite the implied benefits of the rear-torque bias, this remains a predominantly front-wheel-drive-based setup. Similar to how the previous RS3 could be outfitted, the new car rolls on tires that are wider in front than in back, 265/30R-19s to the rear 245/35R-19s. And since only 50 percent of the engine's torque can be routed rearward, the RS3 can't break its back end loose with the same impulsivity of, say, a BMW M2. It takes deliberate effort and a heavy right foot to overcome the chassis's natural inclination towards understeer, and once you cross that limit of adhesion it requires persistence to keep it dancing on that edge.

Making the most of RS Torque Rear on the track also requires diligence, plus a bit of trust on the driver's part. Our drive included laps on Greece's Athens Circuit, a tight 1.3-mile track featuring a short straight and 10 corners. Taking the conservative all-wheel-drive line into turns yielded no help from the RS3's torque-vectoring rear axle. It's best to be more aggressive on corner entry and ignore your instincts to back off the throttle. Just before the front end begins to plow wide, mat the throttle to shuffle the torque to the rear axle and let the all-wheel-drive system's programming sort it out. That's not to say the RS3 isn't potent when pushed hard. Audi test driver Frank Stippler recently posted a 7:40.8 lap around the Nürburgring, beating the time set by, among other all-wheel-drive rockets, the original Bugatti Veyron.

On the open road, the RS3 feels much more in its environment. With its adaptive dampers in their comfort setting, this diminutive sedan evokes the composure and stability of its larger Audi brethren. Up front, the strut suspension features model-specific pivot bearings that add nearly a degree of negative camber compared to the regular A3. A multilink setup sits in back, along with a hollow anti-roll bar and a half-degree of additional negative camber. Overall, the RS3 rides 1.0 inch lower than the A3 and 0.4 inch lower than the S3. Top speed is governed to 155 mph, although opting for the RS Dynamic package ups that to 180 mph.

Look beyond its performance and the RS3 receives the same updates found in the new A3 and S3. The interior features a far more premium look, thanks in large part to the 10.1-inch touchscreen that's now integrated into the dash. The 12.3-inch configurable digital instrument cluster is flanked by vents that resemble motorcycle grips. An RS design package adds either red or green accents to those vents, plus color-keyed seatbelts and contrast stitching on the seats, though we're less enamored by the dinky-looking shift toggle on the center console. Also somewhat out of place are the acres of gloss black plastic adorning the car's front end, which look a bit unfinished and appear at odds with the rest of the tastefully aggressive sheetmetal.

Gaping face notwithstanding, the RS3 is a superb evolution of Audi's original brand-defining formula. If this sounds like a fitting way to celebrate the sonic joy of its odd yet charming powertrain, you'll have to wait early next year to buy one in the United States. Pricing has yet to be announced, but we expect it to start just under $60,000. Endearingly eccentric and capable as the RS3 may be, it's hard to predict how long Audi will continue to support this niche segment with a near-bespoke engine. Although we're down for whatever the future brings, we hope the brand leans on its EV engineers to create soundtracks that are as glorious as the RS3's.

Tagged under
More in this category: « 2022 Audi e-tron GT and RS GT Make Us Forget They're EVs Audi Q5 Sportback Review: As Practical as It Can Be »