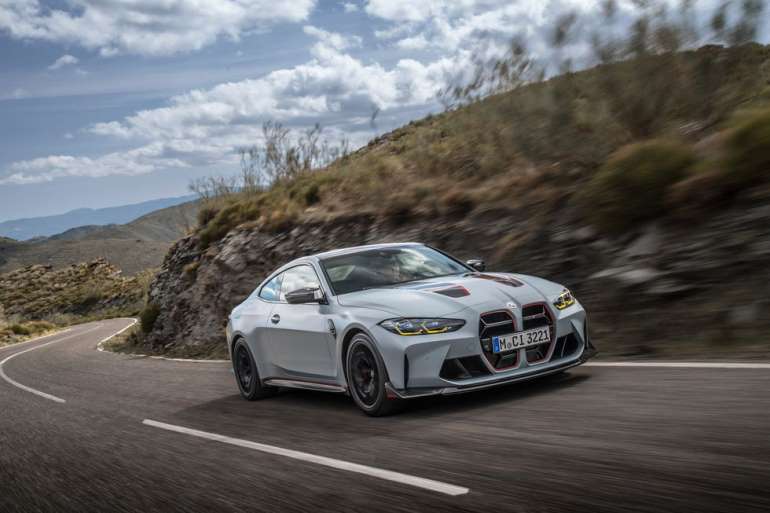 This ultimate M car is BMW's answer to the Porsche 911 GT3 and the upcoming Mercedes-AMG C63 S E-Performance.

At an indicated 274 km/h (170 mph) on the Autobahn A94 Munich-Passau in the 2023 BMW M4 CSL, we muster the last crumbs of courage and stretch out the right foot all the way. Guess what happens? The thing downshifts into seventh. At a ludicrous 5800 rpm, a token 1400 rpm below the redline—ignoring the danger to the driver's ancient heart. At 300 km/h sharp (186 mph), it upshifts into eighth again, still accelerating, but now with the digital speed readout increasing by 1 km/h at a time. (It’s 5:30 a.m., and there's no traffic in sight, so the relative risk is at its lowest.) Theoretically, this ultimate M car is capped at 191 mph. But what looked at first like a barely noticeable kink up ahead in the freeway suddenly felt like A Very Serious Corner. "Never lift"? T-shirts rarely tell the true story, but the rearview mirror always does. And it showed the driver grinning from ear to ear. 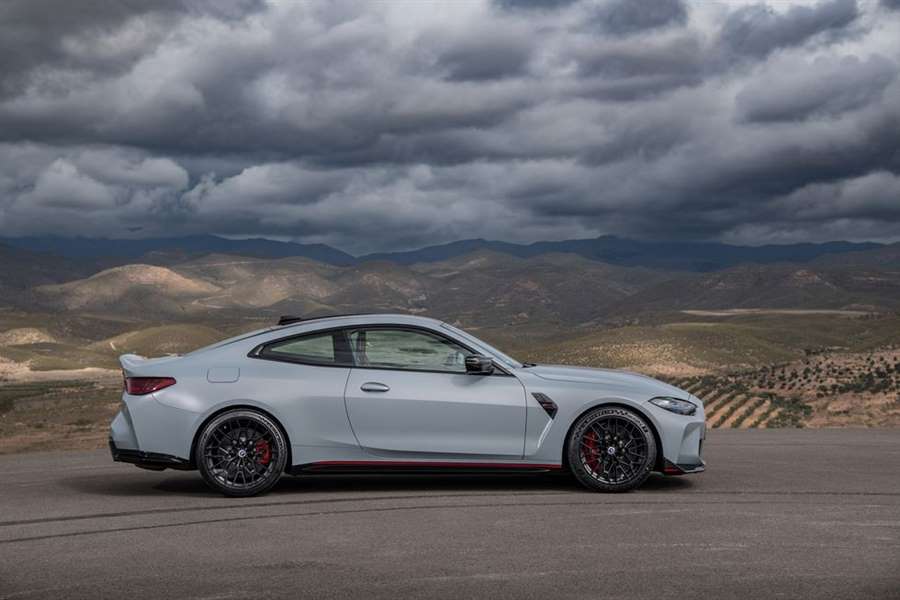 The M4 CSL is BMW's answer to the Porsche 911 GT3 and the upcoming Mercedes-AMG C63 S E-Performance. Like the hardest-core 911s, this BMW is strictly rear-wheel drive, and it shows, especially in the wet with Michelin Cup 2 R tires, which should only be legal in sunshine states, not in Bavaria. Compared to this beast, every other M4 is a kitten. For a start, the CSL is a claimed 190 pounds lighter than the base model. You can feel the weight savings, and you can also hear it. Stripped of its back seat, the rear compartment has mutated into a giant boom box. Some 24 pounds of removed sound-deadening material exacerbate the acoustic assault, with the carbon-fiber roof capping the resonance chamber, and the titanium exhaust designed to raise goosebumps. A whopping 53 pounds were saved by replacing the standard seats with carbon-fiber screw-clamps billed as sports buckets. Upping the pain coefficient of the seats is the lowered and stiffened suspension. 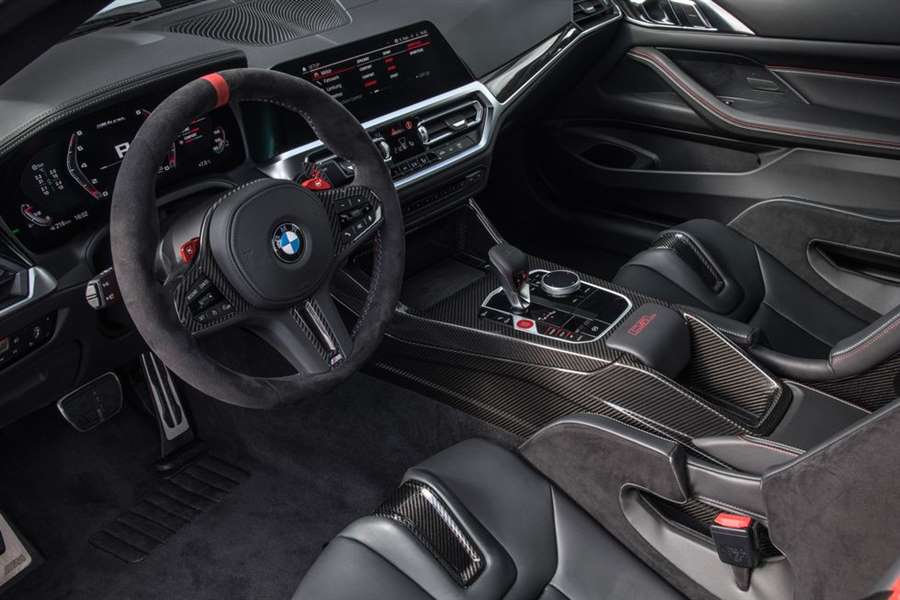 The first 20 miles are an I-hate-this-car experience. The 275/35ZR-19 and 285/30ZR-20 tires wriggle along like a quartet of eels. The dampers in Sport Plus are devoted wholly to shock, not absorption. The steering is initially too light to be trusted. And every blip of the throttle strikes your nervous system like lightning. You never relax in the M4 CSL, but the initial angst eventually does recede as curiosity replaces it, followed by the first bouts of let's call it confidence. In Sport, with tire temperatures at last where they should be, we finally dare to dive into the car's deep talent pool and snorkel for all the revelations it harbors. Like more cornering grip than a gallon of Loctite and more poise than such a zero-tolerance setup should be allowed to muster.

The CSL engine is the ultimate variation of the M division’s 3.0-liter twin-turbo straight-six. Its output is boosted from the base model's 473 horsepower and 406 pound-feet to 543 horsepower and 479 pound-feet. That's the good news. The bad news is the money thing. At a starting price of $140,895, one could buy two base M4s for the cost of a CSL with a few options. And BMW has closed the order books even before the first of the 1000 limited-edition models was delivered to a customer. Scarcity alone should make the striped-and-winged lightweight special an instant blue-chip investment—but is it? Although the CSL is exceptionally involving and outright faster than its siblings by some margin, our estimated zero-to-60 time of 3.3 seconds is eclipsed by the comparatively inconspicuous M4 Competition xDrive, which may be down 40 horsepower but has the same torque and hits 60 in 2.8 seconds, all for about $60K less. 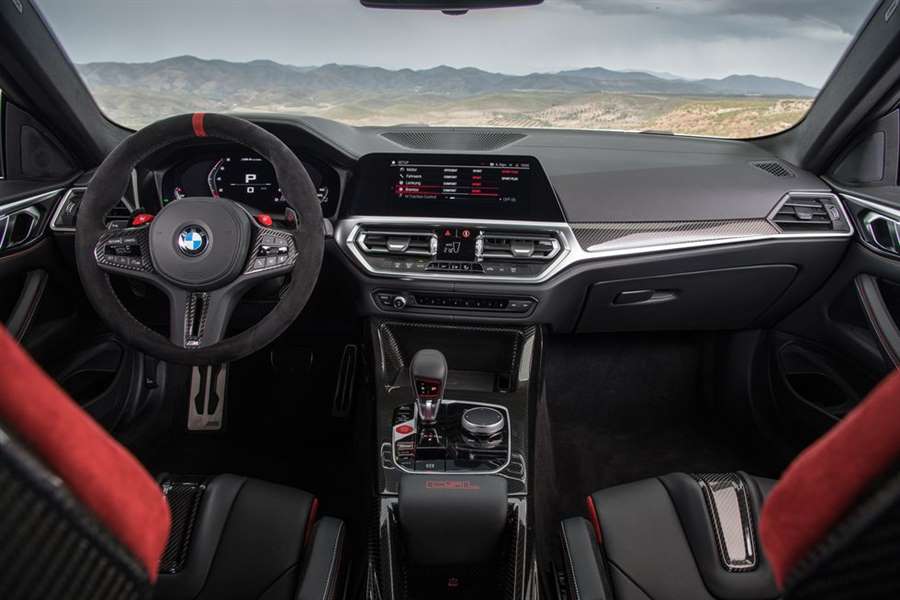 After just over 200 miles, we had to pit for fuel. The mileage? An OPEC-friendly 12 mpg. But what the hell? It finally stopped raining, and the winding route back to Munich promised a familiar Garden of Eden dotted with twisties and free of radar traps. Time to forget the tame preset M1 program and dial in the devil's own M2 composition instead. The preferred algorithm looked like this: engine in Sport Plus, gearbox in the S3 quick-shift setting, chassis in Comfort (compliance is control), DSC in MDM (M Dynamic Mode), steering and brakes in Sport.

Despite certain NVH conspicuities, the CSL drivetrain epitomizes absolute seamlessness. Hard acceleration brutality beams you through time and space, accompanied by a howling, growling, barely filtered soundtrack. The initially explosive, then increasingly progressive forward thrust has its antidote in the simply stupefying carbon-ceramic brakes. There's no doubt about it: This car makes your eyes pop out in one take only to flatten the earlobes in the next. It quite simply redefines the Ultimate Driving Machine.