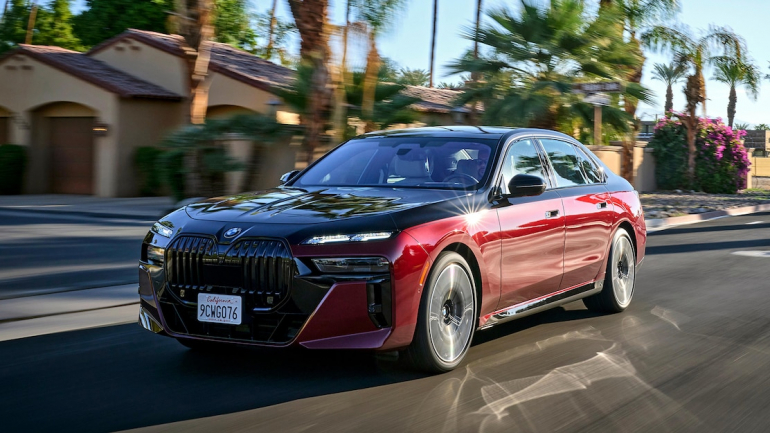 "But" is a theme in the 2023 BMW 7 Series. Its exterior makes the Chris Bangle-design era seem idyllic, but its interior is elevated to a level that makes all BMW 7 Series before it seem like a 3 Series in comparison. It covers ground with tranquility but does not forsake engagement; indeed, its driver's seat is a great place to be, and its second row is better than ever. Plus, the 2023 BMW 7 Series integrates new combustion powertrains. But its first all-electric powertrain is its real story.

Considering the new 7 Series as a whole, "but" becomes irrelevant. No dispute: it is a deeply impressive, segment-challenging flagship luxury sedan. 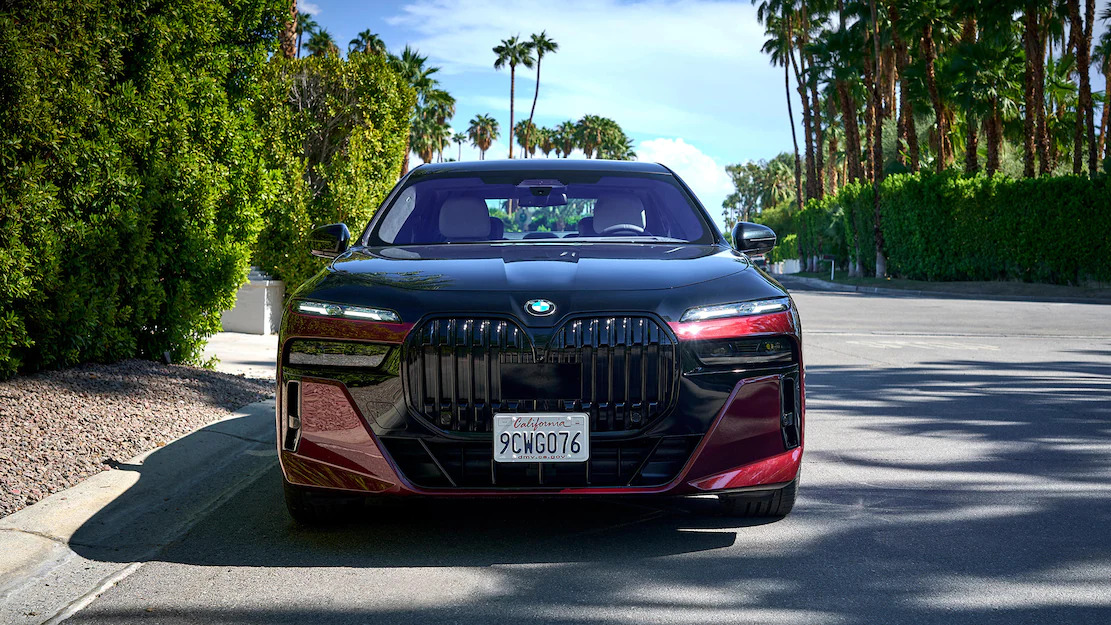 This G70-series model is the seventh generation of the 7 Series, now longer, wider, and taller than before. Though the storied V-12 engine has succumbed to emissions regulations, 48-volt mild hybridization extends the lifespan of the 375-hp, 383-lb-ft 3.0-liter turbocharged I-6 found in the 740i. The same goes for the 536-hp, 553-lb-ft 4.4-liter twin-turbo V-8 underhood in the 760i xDrive. Given that its V-8 is adapted from an M-developed engine, the 760i xDrive accelerates with muscular authority; BMW estimates a 0-60 time of 4.1 seconds. These engines are joined to a new eight-speed ZF automatic transmission, which integrates the crankshaft-mounted starter-generator into the gearbox case. Plug-in hybrid models are on the way, but the all-electric i7 that launched alongside the standard 7 Series most indicates BMW's sustainability focus. Its dual motors match the V-8's power and deliver up to 318 miles of range.

Ever a bastion of controversial design, the 2023 BMW 7 Series continues that legacy. The exterior is a revolution, only vaguely recognizable by its sizable body and key BMW cues; see the large, hard-mounted Hofmeister kink and improbably larger kidney grille, now highlighted by an LED surround. Surely the headlights are the most divisive element—literally. Their split design, where running lights above draw attention away from the primary bulbs below, are a signifier of BMW's highest-end models including the XM and refreshed X7. Despite the car's monolithic appearance, it achieves a fairly low drag coefficient of 0.24 by way of hidden active vents and airflow-directing chamfered edges. 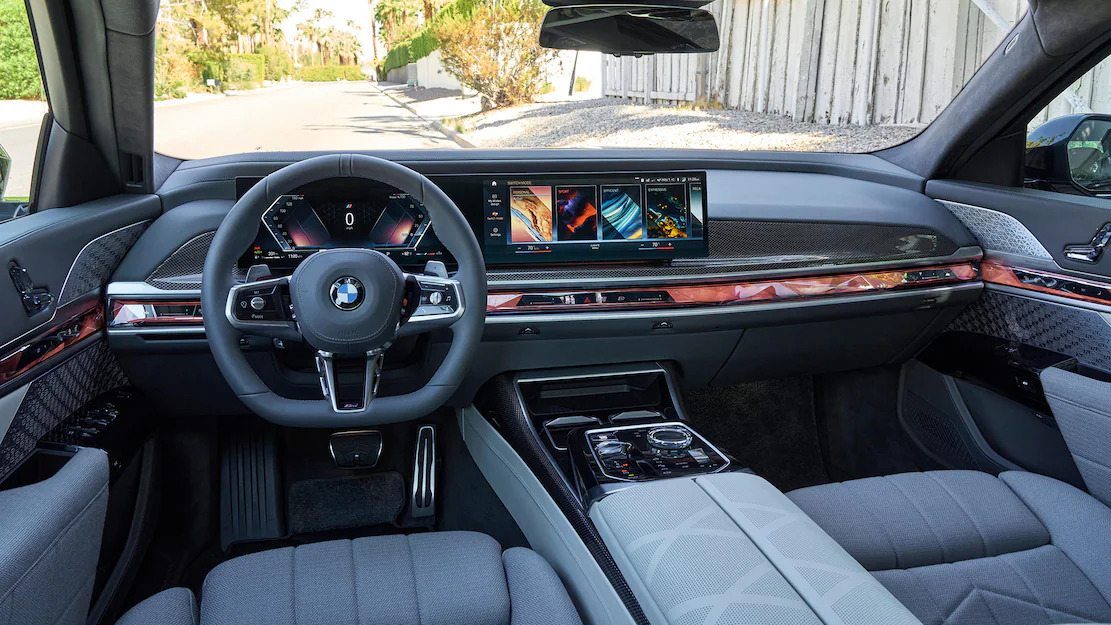 Moving beyond the body and through the optional power-operated doors lies a cabin of tremendous opulence and artistry. Though its general appearance is a development of traditional BMW layouts, the interiors of prior 7 Series pale in comparison. Its seats are gloriously plush, covered in upholstery finished in a creative geometric pattern extending all the way down to the base. Various cut-glass controls glimmer in sunlight. If leather and wood are too conventional, BMW offers trims like woven cashmere and silver-hued carbon fiber. Textured metallic speaker grates add visual intrigue to a sound system that enhances digital-audio quality to a level akin to a live performance. Nothing seems left untouched: Even the headrests are adorned with trim and integrated so no unsightly metal support struts are visible.

BMW's restraint in not fitting trendy enormous screens allows for better presentation of these beautiful materials, but by no means are the 7 Series' front-row displays small. A 12.3-inch gauge cluster and 14.5-inch touchscreen are paired beneath a pane of curved glass, with a head-up display above. The rear area, however, offers technology that might've once existed only in the concept-car realm. Each rear door has a 5.5-inch touchscreen, allowing passengers to control various climate and comfort settings. The pièce de résistance is an optional 31-inch 8K touchscreen display that folds down from the ceiling, giving passengers endless ways to stay entertained.

Yet the dazzle is compromised by the clumsiness of BMW's latest iDrive 8 user interface. Physical buttons are largely eliminated, replaced by digital equivalents confined within these touchscreens. Simple functions—adjusting the seats, climate control, or drive mode—require distracting glances away from the road to tap haphazardly at small icons. At least the "Hey, BMW" voice command can handle many tasks, and the on-screen graphics are presented in an imaginative way. The new Interaction Bar stretching across the dashboard further enhances overall ambiance: It projects various color changes to signal functions like an incoming call or driver-assist alerts.

To Drive, Or Be Driven?

Given the fact its V-8 is adapted from an M-developed engine, the 2023 BMW 760i xDrive accelerates with muscular authority that's augmented by the transmission's integrated motor, which supplies electric torque to move the car off the line with finesse. Shifts are barely perceptible, but even so this powertrain cannot match that of the i7 in outright smoothness—the subtle vibrations it produces simply do not exist in its electric counterpart. Conversely, the i7's Hans Zimmer-composed driving sounds are amusing but hardly compare to the thrum that permeates the 760i's cabin as the engine nears its redline. Less appreciable sounds are heard, too, if quietly. If BMW had opted to integrate active noise cancellation into the 7 Series, it might've lessened the tires' patter and side mirrors' turbulence.

Supported by air suspension, the 760i permits only enough texture to inform on the road surface beneath and deftly reduces harshness over potholes and ditches. This ride keeps the car placid at speeds well beyond the pale. But it becomes slightly perturbed by successive small impacts, which introduce a side-to-side jiggling sensation. Meanwhile, more so than the i7, the steering's precision, weight, and feel rests right on the cusp of what might be considered comfortable, as available active roll stabilization props-up the body—ideal for a driver-oriented luxury car.

Even with these attributes, the 2023 BMW 7 Series' second row beckons. It's so spacious, cushy, and richly appointed, even a keen driver might willingly abdicate control to a chauffeur—a proposition not typical among 7 Series buyers, according to BMW's research. Several backseat upgrade packages are available, which bring amenities ranging from heating, ventilation, and massage functions all the way up to reclining backrests, extending ottomans, and an enhanced center armrest. Regardless of equipment, with or without the huge theater screen, the LED-illuminated glass roof adds an airy atmosphere. Furthermore, a chauffeur-esque experience can be had in the front seats as BMW's trustworthy hands-free driver-assists take control on the highway.

But …
Congruences are held in balance in the new 7 Series. Dubious exterior beauty, but a sensational interior. Gratifying driving manners, but an equally impressive backseat experience. Deeply capable technology, but frustrating integrations.

Perhaps the ultimate "but" regards which model is best. At approximately $94,500, the I-6-powered 740i serves as a starting point beneath the $115,000 760i xDrive. But then there's the roughly $120,500 i7 xDrive60, which, though the most expensive, might provide a higher level of comfort and certainly feels more like a BMW of the future. Regardless of which model customers choose, the 2023 BMW 7 Series abolishes any doubt it's the marque's highest expression of luxury.