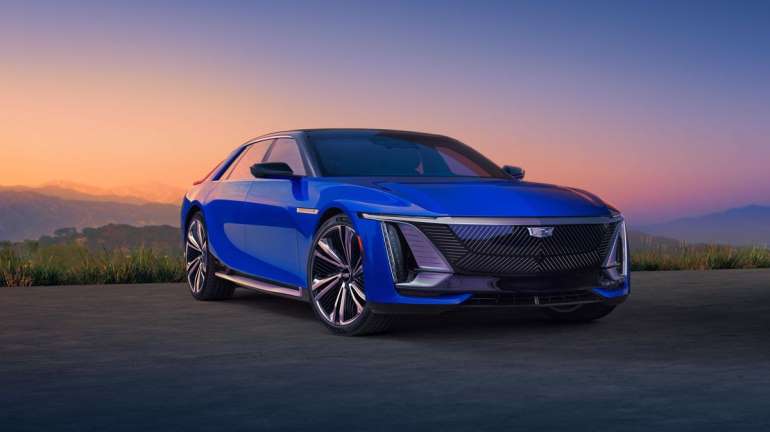 Cadillac has been laboring in the shadow of European luxury brands for several decades, but it hasn’t given up: witness the company’s new electric flagship, the Celestiq sedan. This stunner shares a family resemblance to the new Lyriq EV SUV, but its sleek lines, sweeping roof, and bustle rear end give it dynamic proportions and jaw-dropping presence. Cadillac’s designers say that they have incorporated design elements from the past alongside high-tech systems that predict the future direction of the American luxury brand. The cabin is just as dramatic as the exterior styling, and it dazzles with brightly colored leather, a 55-inch digital dashboard, and Eames-inspired bucket seats. The Celestiq’s assembly line will be manned by a small team of craftspeople who will hand-build each one. Customers will design their own Celestiq when they order, similar to the Rolls-Royce method of bespoke production. Will that be enough to launch Cadillac out of the shadows? We’ll see once we get to drive one. 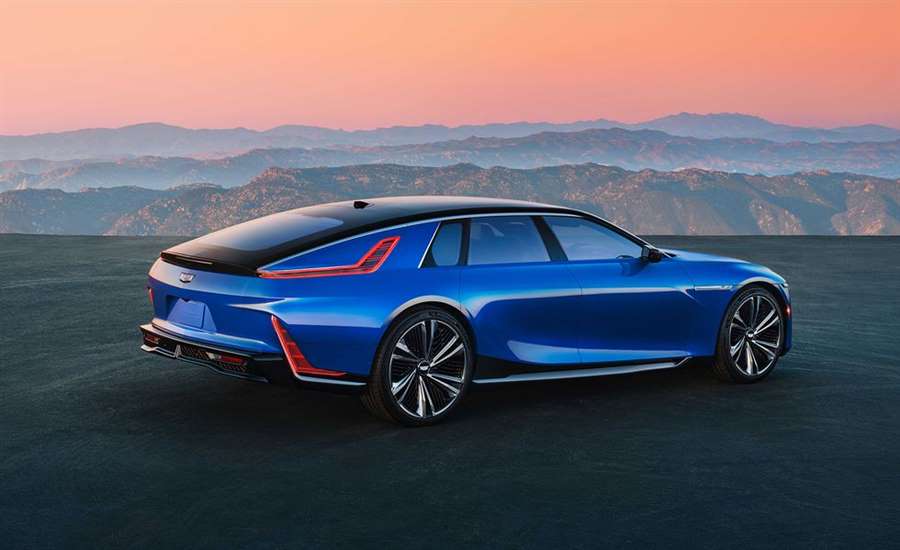 The Celestiq is heading for production as an all-new model for Cadillac’s 2024 lineup but don’t expect to see this showstopper sitting on your local dealer’s showroom floor. Celestiqs will be special-ordered, tailored to each customer’s specifications, and likely will be delivered as discreetly as they are purchased.

The Celestiq will be a unique model in the Cadillac lineup for several reasons, not least of which is the fact that each one will be built to order. By hand. Celestiq (pronounced “cell-es-teek”) production will necessarily be limited as a result. Cadillac says there’s essentially no limit to customization opportunities, so we expect some buyers to create Celestiqs that turn heads today and and years from now when the cars turn up at future Pebble Beach Concours d’Elegance. Although Cadillac has yet to release pricing information for its new flagship sedan, the company has said that it will start “north of $300,000.” Customization choices will no doubt push prices even higher. 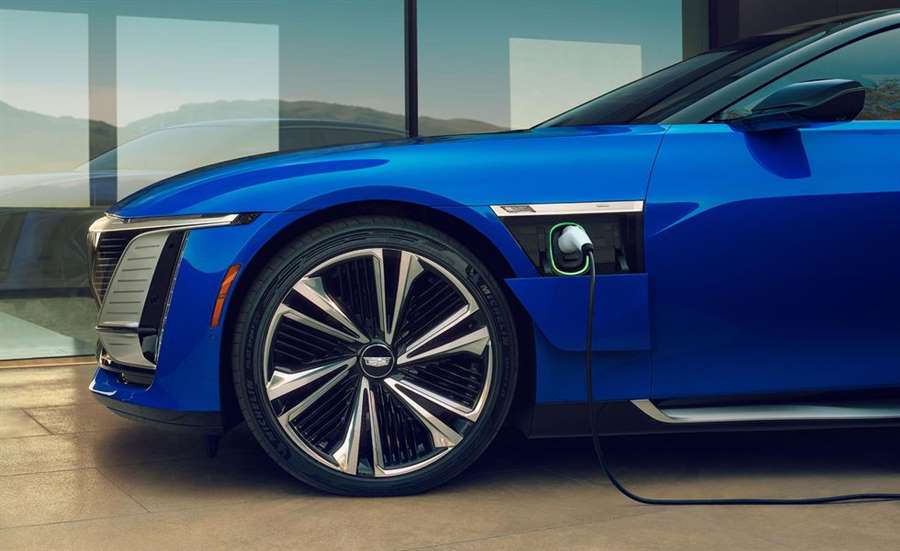 While much of the Celestiq is highly customizable, its powertrain is not: All models come with a dual-motor all-wheel drive electric powertrain that Cadillac estimates will make around 600 horsepower. The company says that’s enough to launch the Celestiq to 60 mph in 3.8 seconds, which would put it in the same league as entry-level models of the Audi e-tron GT and the Porsche Taycan. Rather than attempting to be a big sports sedan, we expect the Celestiq to take a much tamer, comfort-oriented approach to road manners—more Bentley than Blackwing. An adaptive air suspension system is standard, as is a rear-wheel steering feature that helps the long sedan maneuver more lithely in tight spots and swing tighter u-turns. It will be a while before we are able to test-drive the Celestiq, but when we do we'll update this story with driving impressions and test results.

The Celestiq will draw its electrons from an Ultium battery pack that’s large enough to deliver around 300 miles of EPA estimated driving range per charge. While that’s likely to be enough for most drivers, it’s already far behind the best. For reference, the longest driving range available in a Tesla Model S is a 402 miles, and the new Lucid Air sedan boasts a range of up to 516 miles. The Celestiq is capable of recharging on a DC fast charging connection and Cadillac says that on a 200-kW connection the battery can be juiced with 78 miles of range in just 10 minutes. 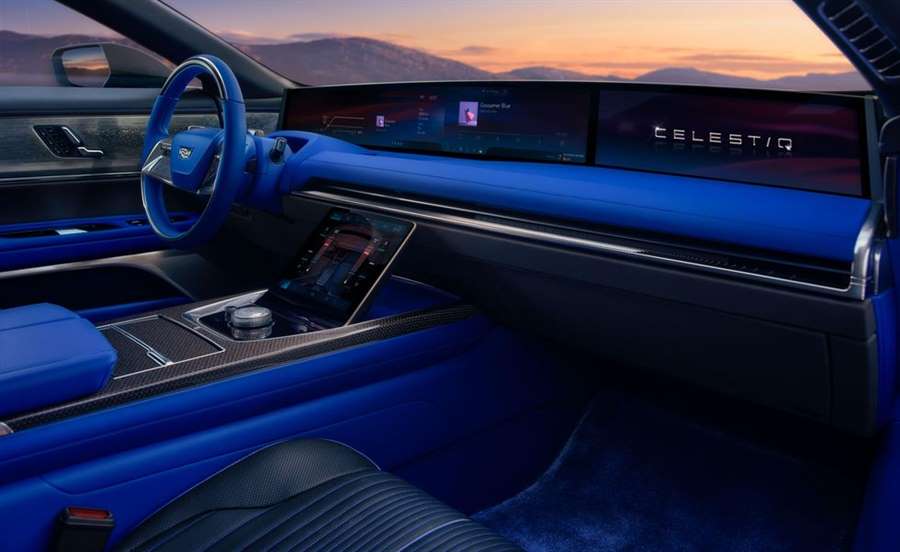 Starting with an instrument panel that is essentially one giant digital display, the Celestiq's cabin is a technological powerhouse. Four bucket seats mean each occupant will enjoy their own bubble of space. The roof is made from an electrochromic glass panel that can be adjusted from transparent to opaque, and every passenger can control their own little corner of the sky. Buttery leather, available in practically any color, lines much of the cabin, and other interesting materials are used throughout as accents. Brushed metal trim intermingles with ecologically sourced open-pore wood, which has been perforated to allow sparkles of light to shine through from the ambient interior lighting system. The cargo area is also lined with leather, is generously sized, and features attractive metal inlays on the floor. The Celestiq, by the way, is a hatchback rather than a traditional three-box sedan, similar to cars like the Audi A7 and Kia Stinger.

Most luxury cars boast large infotainment displays measuring 10.3 or 12.3 inches, but the Celestiq’s is all of w 55.0 inches spanning the entire width of the car's dashboard, much like Mercedes’ new hyperscreen. Rear-seat occupants can also enjoy their own 12.6-inch displays for watching movies, checking the internet, or controlling the car's stereo system. Speaking of stereo, the Celestiq boasts a 38-speaker AKG Studio Reference stereo system with three amplifiers and 3D surround sound.

All Celestiqs will come with a host of driver-assistance features from basics such as automated emergency braking to advanced hands-free driving via GM’s new Ultra Cruise system, the next generation of the company’s Super Cruise hands-free driving technology. For more information about the Celestiq's crash-test results, visit the National Highway Traffic Safety Administration (NHTSA) and Insurance Institute for Highway Safety (IIHS) websites. Key safety features include:

Like the rest of the Cadillac lineup, the Celestiq will come with a powertrain warranty that trumps that of other luxury sedans. Cadillac currently covers the first dealer maintenance visit, but rivals such as the BMW 7-series offer longer periods of free maintenance. We would expect that the Celestiq's battery warranty will match that of the Chevy Bolt's at eight years or 100,000 miles.

Tagged under
More in this category: « First Drive: 2023 Cadillac Lyriq Is a Departure in More Ways than One