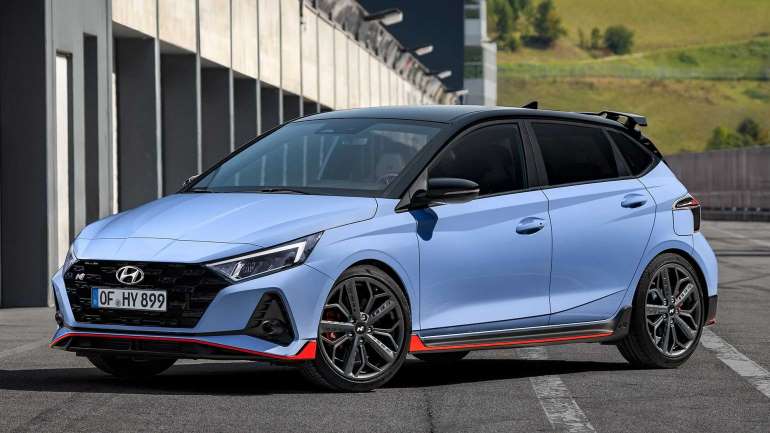 Is the Hyundai i20 N any good?

Despite the march of electrification, the Hyundai i20 N proves there’s life in the old-fashioned hot hatch formula. In essence, Hyundai has taken the turbocharged 1.6-litre engine usually found in its larger models and shoehorned it under the bonnet of one of its smallest.

To make the most of the muscle under the bonnet, the suspension has been stiffened and lowered with uprated springs and dampers. The styling also gets a boost, with aggressive-looking bumpers front and rear, prominent side skirts, 18-inch alloy wheels and a rear spoiler proudly mounted on the tailgate. In other words, it’s packed with attitude and promises to excite on the road, too.

That’s because Hyundai’s N Division has been orchestrated by the former head of BMW’s M Division, Albert Biermann. That means he has the final sign-off on all new N-badged cars, which might explain why the company has put so much work into their steering and handling. The i20 it’s based upon slots into the small car class, and goes up against the Ford Fiesta and Volkswagen Polo – so it stands that the hot version is gunning for the ST and GTI respectively.

The i20 N’s interior is packed with tech, and dominated by a 10.25-inch digital instrument panel and similarly-generous central infotainment touchscreen. The system is quick and easy to use, and in addition you get wireless mobile phone charging, a reversing camera with parking sensors, and digital climate control with easy-to-use toggle controllers.

That’s all standard i20 fare, but the high-backed sports seats certainly aren’t. From the driver’s perspective you get what you need – all the support you need, especially in corners, and a great view out. All the major controls are well-sited and the manual gearbox is a pleasure to use (more of that below).

As a small family car, the i20 N also works well – it’s roomy in the rear and has a decently-sized and shaped luggage area. If you want a three-door version, forget it – like so many small cars these days, it’s five-door only. 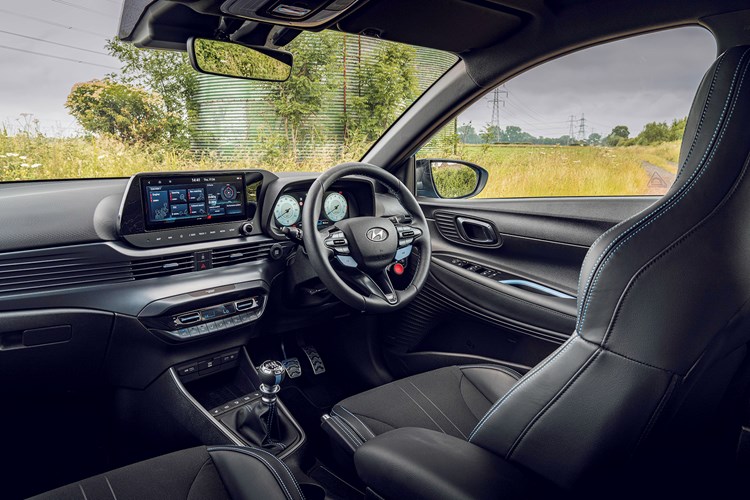 In a word, great. It’s a small car that packs 204hp and 275Nm, so it’s quick off the blocks. It accelerates from 0-62mph in 6.2 seconds and goes on to a maximum speed of 142mph. In true hot hatch fashion, it thrives on revs – it goes well at medium speeds, but it really picks up its pace and flies beyond 4,500rpm, pulling strongly to the rev limiter. It doesn’t sound as tuneful as the delightful three-cylinder turbo in the Fiesta ST, but it has a raw appeal that suits its nature.

It’s currently available with a six-speed manual only, which offers a slick change that encourages quick driving. It also has a rev-matching function which blips the throttle when you change down, smoothing fast shifts.

Handling and steering are this car’s real forte. The steering is super responsive without being nervous, and you can tailor the weight to your liking via the infotainment system. Turning into a tight bend is an absolute joy with plentiful grip, a neutral balance and not much body roll. Yes, the ride is firm, but it’s well damped and although you’ll find yourself bobbing around in the driver’s seat more than a standard i20, it’s not uncomfortable.

It’s certainly far more entertaining than the softer-edged Polo GTI, but doesn’t have the same level of playfulness as the Fiesta ST. Where the I20 feels planted on the road, the Fiesta’s tail can be provoked into sliding when entering corners in a most entertaining fashion.

The cash price for an un-optioned Hyundai i20 N is around £25,000, which makes it more cheaper than the Ford Fiesta ST, now available only in well equipped ST-3 trim. It’s better equipped than the standard i20 – but there are options to choose from, too.

Performance Blue paint, as well as a selection of metallic and pearl colours can add up to £550 and adding a contrasting a black roof costs an additional £500. Want a better stereo? Upgrade to a Bose surround-sound system for another £500.

More in this category: « 2022 Hyundai Kona Electric Review: A Likable, Livable EV — if You Can Find It 2022 Hyundai Ioniq 5 Review: The EV We’ve Been Waiting For »