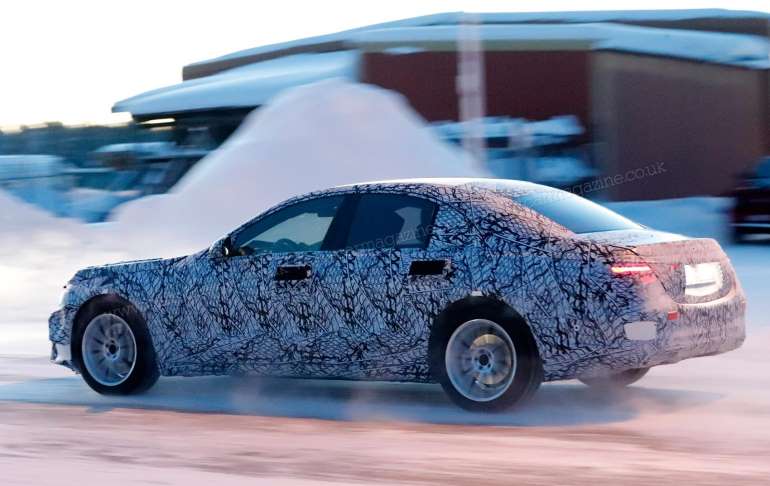 Despite being covered from front to rear, the next generation of Daimler’s flagship does show a good chunk of its wide grille as well as most of the headlight design. The door handles remain covered under extra layers of camo, leading us to believe the S will switch to those nifty electronic pop-out handles we’ve already shown in Maybach version

Speaking of electrification, even the AMG S63 will switch to a plug-in hybrid engine, while the V12 won’t be making a return since the 6.0-liter engine died with the model S65.

The future Maybach S-Class might still have the twin-turbo with its mighty 600+ horsepower taking into account Mercedes said a while back the V12 could stick around for a while in models carrying the double M badge.

While the standard S-Class is based on the MRA platform, the all-wheel-drive Mercedes-Benz EQ S sits on a more innovative MEA (modular electric architecture).It will get two electric motors in front and rear which provide permanent four-wheel drive in all variants. The car is expected to produce 406 hp and 516 lbft (700 Nm) and even more.

The S-Class lineup will be going through some drastic changes as proverbial axe, while the sedan model will allegedly be sold only with a long wheelbase. Additional plus the extra-long Maybach and maybe a new extra-extra-long Pullman. The death of the two-door models wouldn’t come as a surprise seeing as how sales haven’t been exactly great, and with Mercedes developing both a next generation of SL and an AMG GT. There is a basic risk the two would partially overlap with the S-Class Coupe and Convertible, therefore cannibalizing sales.

Tagged under
More in this category: 2022 Mercedes SL »