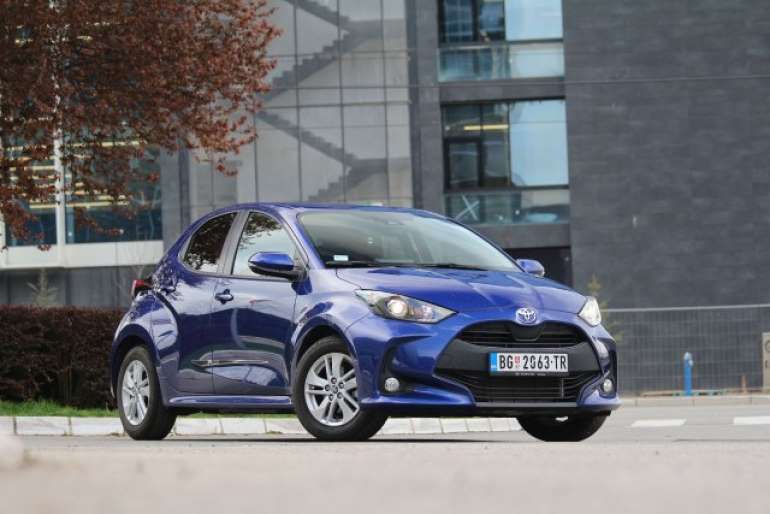 We couldn't even dream that the Yaris would become the best-handling car in its class. Even with the weakest engine, it easily copes with city traffic, with low consumption and extremely rich safety equipment.

It really impressed us with its great performance and low consumption. Of course, there is also a hybrid variant on offer, which is by far the best-selling in Western Europe.

It is a combination of the already mentioned 1.5 atmospheric engine and an electric motor, with even lower consumption and great savings on fees and taxes. 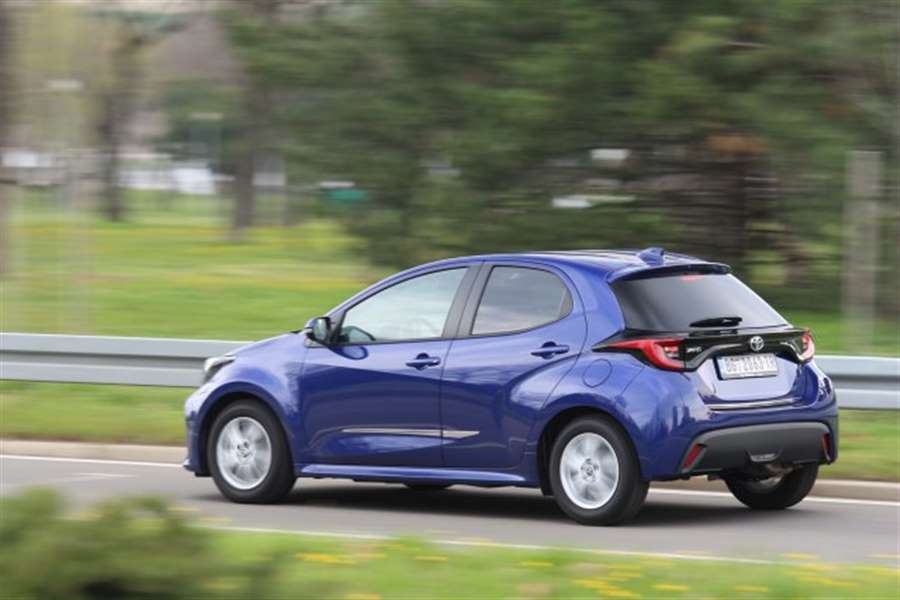 We also have subsidies, but they are such that there are still many customers who will prefer to look for a more acceptable solution for their wallet, even though it is also quite expensive. You guessed it, it's a Yaris with a 1.0 engine.

Its price starts from 16,390 euros. That's how much the basic, "luna" equipment package costs.

Don't worry, it's not a "clot". It may not have aluminum wheels, but that's why it has a system for automatic braking, prevention of unintentional lane departure, reading traffic signs, automatic activation of high beams, adaptive cruise control that automatically maintains a distance from the vehicle in front...

It doesn't have navigation, but that's why it has a seven-inch multimedia with Android Auto and Apple Car Play applications, so you can use maps from your phone without any problems.

The car that we present to you has the third "salt" equipment package in a row. The list of standard equipment also includes alloy wheels, electric rear windows, additionally tinted rear windows and a larger eight-inch multimedia system.

A reversing camera is standard, as are a rain sensor and headlights. 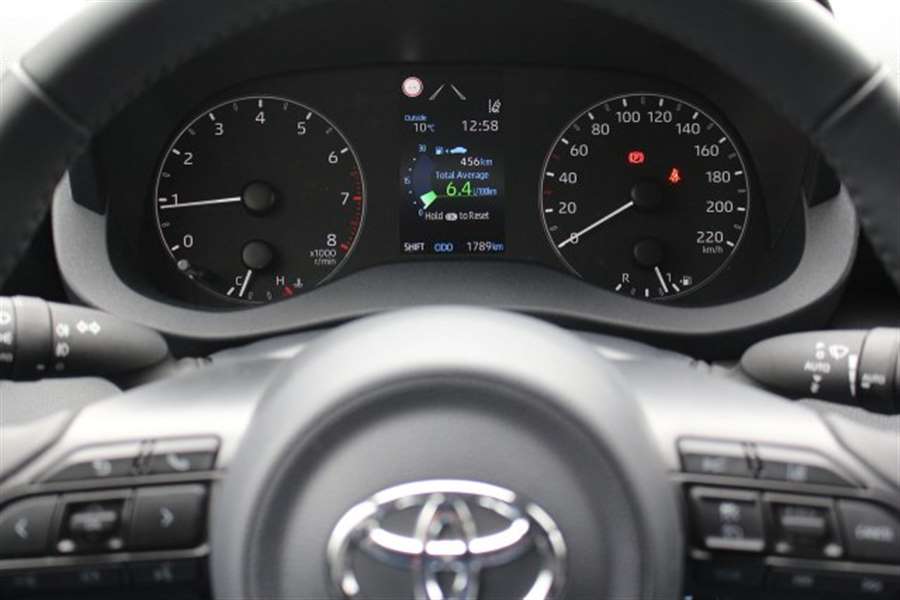 It is interesting that the standard of the second equipment package is a special acoustically insulated windshield, which is very noticeable on the highway.

Noise is really kept to a minimum, making the Yaris one of the quietest in its class.

However, the 1.0 engine is not designed for high road speeds. It reaches the maximum at 160 km/h, but anything over 130 is already an effort, especially since at that speed it "spins" at around 4100 revolutions, just like the old atmospheric cars.

On the other hand, it does not prevent him from being a moderate consumer. The trip computer at 130 km/h shows about 6.5 l/100 km, which is the same result we recorded in city driving.

The city is already an environment that is incomparably more pleasing to him. The engine is very flexible, considering that it has 72 horse power, so there is no need to "spin" it in high revs for faster driving.

Simply, with it you will not feel inferior in the city, which is the essence of Yaris with this machine. 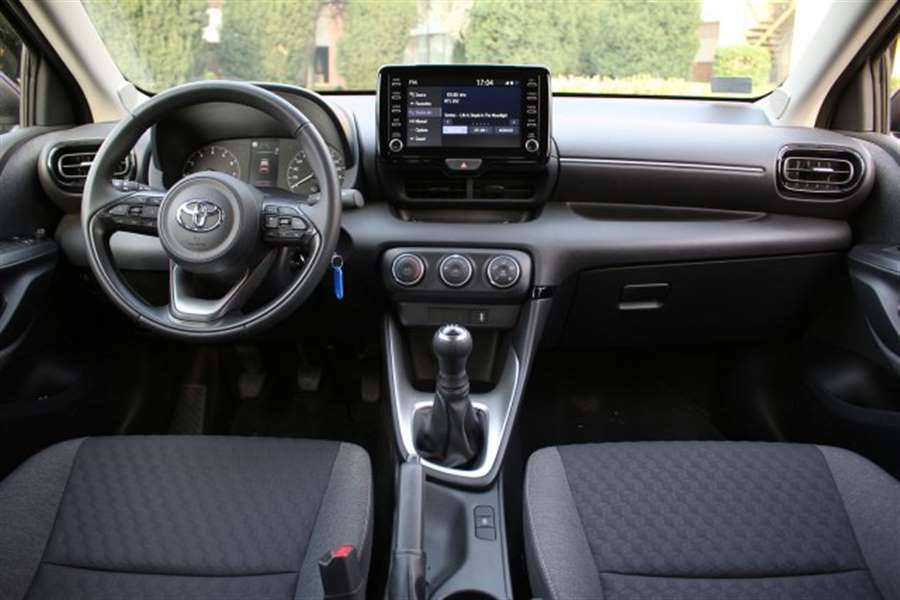 The constructors made an effort to ensure that the engine is well balanced in the sense that there are no vibrations on the back and while driving. Moreover, the sound is also muted.

Speaking of comfort, the Yaris can really boast of comfort. We are not only referring to the suspension that gently absorbs small bumps, but also to ergonomics.

You sit in a semi-reclined position at the front, just enough so that you don't feel tired from an overly erect spine during long periods of sitting behind the wheel, and yet visibility is not impaired.

All controls are very soft and precise; the shift lever is close, and the steering wheel has a great ergonomic profile. Even less experienced drivers will feel safe behind the wheel of the Yaris, given that the car is driven without the slightest effort.

Compared to the Yaris 1.5 we already tested, there are no attractive digital instruments here.

The classic is not bad at all, and there is a large display between the speedometer and tachometer, through which many settings can be made, including security systems.

As during the last test, this time the Yaris left a very positive impression with a large number of compartments and shelves on the dashboard.

For example, you can put the phone away, in several places, below and above the "climate" controls.

In both cases, the USB connector is at the same distance, so you can also use one of the short cables to connect to the car.

The materials for lining the cabin are not like the Corolla, but we have to praise the soft dashboard and the interesting material in the upholstery of the doors.

By its texture and structure, it reminds us of the material used for the inner lining of the roof.

We also liked the ergonomically interesting solution of the handle for opening the door, which is somehow tucked into the handle itself.

It may seem oddly placed at first glance, but it is absolutely in the right place, right at your fingertips.

The high position of the window regulator buttons is also specific, but they are also exactly where they should be - right under the fingers.

The rear seats are a separate story. They are by far the most comfortable in the class, with a specially profiled backrest that really rests the back, especially if you are on a long drive.

Compared to other competitors in the B segment, the Yaris offers more than decent comfort for the legs and head. A person of average height has five more fingers of space up to the "sky".

Unfortunately, the "salt" equipment package does not include pockets in the seat backs, nor a spare wheel.

If you are seriously considering buying a new Yaris, we recommend the 1.5 engine versions.

The price is slightly higher and the difference in performance is really big, especially if you plan to drive outside the city. Yaris with "Stella" equipment package is currently on sale, which costs 16,990 euros including VAT.

Compared to the tested "salt", it does not have alloy rims, electric rear windows and has a smaller multimedia display, but that's why all the safety systems are there.

Whatever gear you decide on, you won't go wrong. You will definitely get one of the most technically and ergonomically advanced city cars, where safety and driving characteristics were in the first place.

And the design? Neither male nor female. This is a car that just appeals to everyone. 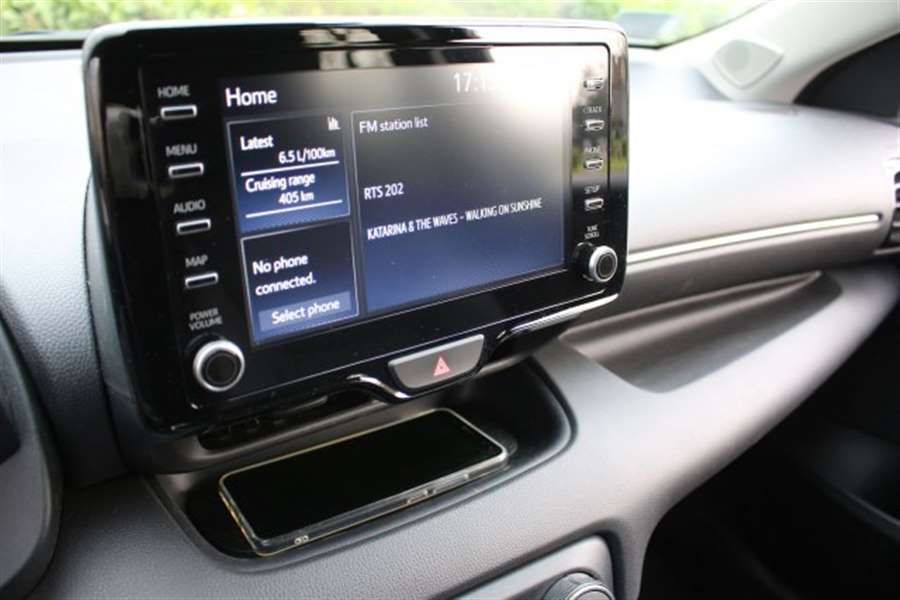 Navigation from the phone

The fact that navigation is not part of the standard equipment is not a problem. You can always connect your mobile phone via the Apple Car Play and Android Auto apps and use the software and map of your choice.

At the same time, you can listen to one of the internet radio stations, as well as use other services.

Every Yaris, even the cheapest, has top security systems. In addition to automatic braking with recognition of pedestrians day and night, cyclists during the day and reacting at the intersection when turning, a semi-autonomous driving system is also standard.

It consists of radar cruise control and a camera, so that in addition to maintaining a distance from the vehicle in front, the Yaris keeps the center of the traffic lane. The car practically steers itself, even in curves.

It is only up to the driver to keep his hands on the wheel because he is responsible for driving. If you do not return your hands to the rim after a few seconds of not holding the steering wheel, the lane keeping system will turn off, with a light and sound warning.

If you really want, you can turn off the security systems individually.

The list of additional equipment is very short at Toyota. Apart from the color, you can pay extra for the automatic (CVT) transmission, which costs 1300 euros and is only available with the 1.5 engine, and of course, the hybrid.

The remaining two surcharges refer to the panoramic roof and additional safety systems in the form of blind spot control and head-up display.

They can only be ordered with the two highest packages.