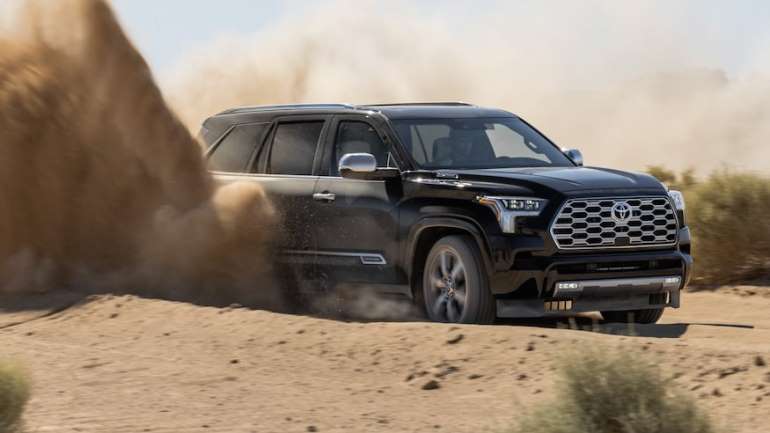 The new Sequoia is among the most statistically impressive three-rows on sale.

The oldest known specimen of Sequoiadendron giganteum lived for 3,266 years in the Converse Basin Grove of Giant Sequoia National Monument. That's about how long the second-generation Toyota Sequoia was on sale. OK, we're exaggerating slightly, but our first drive of the last Sequoia was published way back in November 2007, and the SUV stayed much the same during the following 15 model years that it was on sale. That is longer than double the lifecycle of most vehicles.

That SUV's age was apparent whether you looked at it, drove it, or touched it—in its sluggish transmission, ancient pre-Great-Recession-era design, pitiful fuel economy, and the generations-old switchgear and materials that littered the interior. The all-new Sequoia addresses all of those shortcomings and then some, and now that we've had a chance to stuff it full of testing equipment and spend more time behind the wheel following our first drive earlier this year, we can answer the big question: Is the Sequoia finally worth recommending to more than just the Toyota faithful?

Central to Toyota's reimagined Sequoia is its new powertrain. Gone is the 381-hp, 401-lb-ft V-8 that had been under its hood for a decade and a half. It is replaced by something thoroughly modern: a 3.4-liter (not 3.5, despite what Toyota will tell you) twin-turbo V-6 augmented by an electric motor, the same i-Force Max hybrid setup offered in range-topping Tundras. System output sums to 437 hp and a stump-pulling 583 lb-ft of torque, improvements of 56 hp and 182 lb-ft over the outgoing V-8. Toyota also swapped the old Sequoia's lazy dog of a six-speed for a new, of-this-era 10-speed automatic.

The results? All that extra torque means towing capacity increases by more than 2,000 pounds. The new Sequoia can now drag up to 9,520 pounds, which is at least 1,000 more than most SUVs in the full-size segment; only the 2023 Jeep Wagoneer with its new inline-six beats the Toyota.

As expected, the 2023 Sequoia is significantly quicker in a straight line than its predecessor, too. Our testing shows 0-60 mph in 5.6 seconds, more than half a second sooner than the quickest previous-gen model. The 2022 Ford Expedition's Stealth Performance package may beat it in a drag race, but so far this is the quickest full-size three-row we've ever tested.

The most significant improvement to this big SUV is its fuel economy. The old truck, with its thirsty old-school V-8 and outdated six-speed, was rated worst in its class at 13 mpg city and 17 mpg highway. With its standard hybrid twin-turbo V-6 and 4WD, the 2023 Sequoia is rated at 19/22 mpg on the same test cycles. That's significantly better than a comparable Chevrolet Tahoe, Ford Expedition, Nissan Armada, or GMC Yukon, and fractionally ahead of the aforementioned I-6 Wagoneer. Efficiency nuts will point out GM's diesel offerings fare better, but those SUVs can't match the Toyota's acceleration or towing capabilities.

This efficiency (relatively speaking) is all the more surprising given how, at nearly 6,200 pounds, the Toyota is among the heaviest we've tested in this space. If it doesn't impact fuel economy, it does ding the dynamics; Toyota's largest SUV stops from 60 mph in 134 feet. Among the 15 full-size SUVs we've tested over the past five model years, only two required a longer stopping distance.

Not Just The Numbers

Of course, the new Sequoia Capstone is more than its spec sheet, and spending more time with Toyota's answer to the Tahoe and Expedition exposes some unwelcome driving behaviors. There's a persistent jiggle emanating from the rear end. Even on flat roads, the live-rear-axle Sequoia never feels planted. And, yes, this is one of the few areas in which the new Sequoia lags behind its predecessor, which came with a then-unique independent rear suspension.

Driving anything other than straight, the Toyota behemoth embodies what senior editor Aaron Gold calls "big-car clumsy." Body roll is abundant in corners and the nose dives forward under braking. Multiple staffers also called out major shudders through the body structure when driving the Sequoia over washboard sections of an off-road course.

As for the new powerplant, we have mixed feedback. Drivetrain lash is evidenced by the vehicle clunking into gear, and associate online editor Alex Leanse points out that quick transitions from throttle to brake exposed hesitation in powertrain response.

The engine provides plenty of outright performance, which Gold describes as "like a V-8" but with "an invisible hand pushing the vehicle along." Credit the electric motor's torque fill. Some folks loved the hybrid twin-turbo V-6 but others noted inconsistent surges of power delivery. Toyota also makes this engine sound like a V-8, not with some clever exhaust geometry but by piping fake induction noise through the audio system. Call it disingenuous, but we're not mad about a little aural character even if it's artificial.

We have less kind words for the brake pedal. Leanse notes "a noticeable transition between regenerative and friction braking" and features editor Christian Seabaugh describes the feel as "mushy and Prius-like" to the point that it would ruin the towing experience.

Beyond the driving experience, our test model came in Capstone guise, Toyota's new range-topping truck and SUV trim, which is positioned above the Platinum and TRD Pro. Our test vehicle rings in at $80,095, which makes this the most expensive offering in Toyota's lineup, in addition to landing within $8,000 of a base Lexus LX600. Keep in mind, the LX and Sequoia SUVs share their underpinnings and some mechanicals, though the Lexus is slightly smaller.

Editorial director Erik Johnson feels the interior materials are "decent for $60,000—not so much for $80,000" and notes uneven dashboard stitching and some chintzy-looking plastics, calling out the Capstone as a clearly dressed-up version of a more pedestrian family hauler. There is more frequent use of scratchy plastic the farther back you move in the vehicle, and the third row area is spartan.

The Sequoia's optional 14.0-inch touchscreen infotainment display (standard in Limited models and up) is a bright, responsive, generational leap over the aging 7.0-inch display in the outgoing Sequoia. Wireless smartphone mirroring and a plethora of camera feeds, including one from a 360-degree camera system, help bring the Sequoia into the present. That said, the system has no home screen or central hub outside of a thin, Apple dock-style strip of menu shortcuts flanking whatever menu is selected. Startup defaults to the navigation page which, unless you've paid for a subscription, mocks the driver with a blank screen.

Speaking of rear seating, the second-row captain's chairs are notably firm and mounted high, but both traits are in service to third-row access. Ingress requires only an easy pull of a lever mounted below the seat cushion near the door that results in the second-row seat folding in half and tilting way forward. It's effortless to reach the way-back, even for a small child. That's key, because cramped legroom and headroom mean you won't want full-size adults back there for long.

The 2023 Toyota Sequoia represents an obvious improvement over its predecessor. This year's redesign addresses all of our qualms about that Jurassic-era SUV while also improving its towing numbers, modernizing the infotainment, including a full collection of driver-assist features as standard, and providing best-in-class accessibility to its third-row seating. Being dragged into the present isn't the same as jumping ahead of competitors, however. The Jeep Wagoneer offers a better standard powertrain, marginally higher towing capacity, superior driving dynamics, a nicer interior, and improved infotainment.

If you want a three-row Toyota that'll tow almost anything, the new Sequoia is your best bet. Even then, we'd recommend a Sequoia SR5 or Limited; those models sacrifice little in interior quality or features but deliver the same capability at a much more palatable price. Here's hoping it doesn't take 3,000 years for Toyota to make further improvements.