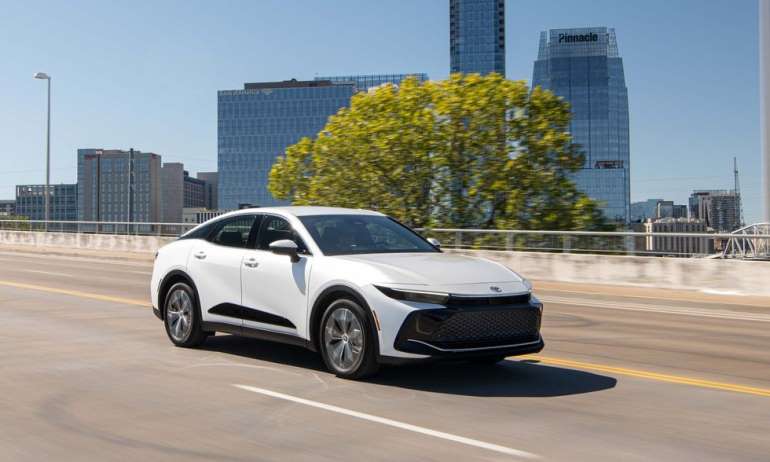 Nobody ever argued about the Toyota Avalon, which was universally described as "perfectly nice." But Toyota, in case you haven't noticed, is no longer content with inoffensive competence. So it replaced the Avalon with the 2023 Crown, a jacked-up four-door coupe-roof sedan that looks like a 1999 Subaru Legacy SUS and a Local Motors Rally Fighter had a baby. The fact that this thing succeeds the Avalon reveals a lot about Toyota corporate culture right now, which we imagine as Rumspringa in Toyota City. What will it build next, and will it be the result of a dare?

The Crown—a nameplate that dates to 1955 in Japan—is 3.7 inches taller than a Camry and twice as extroverted. The high-riding stance is mostly posturing, given that the Crown's ground clearance is only 5.8 inches, just a tenth of an inch higher than the Camry's. But its optional 21-inch wheels look concept-car enormous on a vehicle this size, and the Platinum model's available two-tone paint brings some Maybach attitude to the near-luxury-sedan segment. 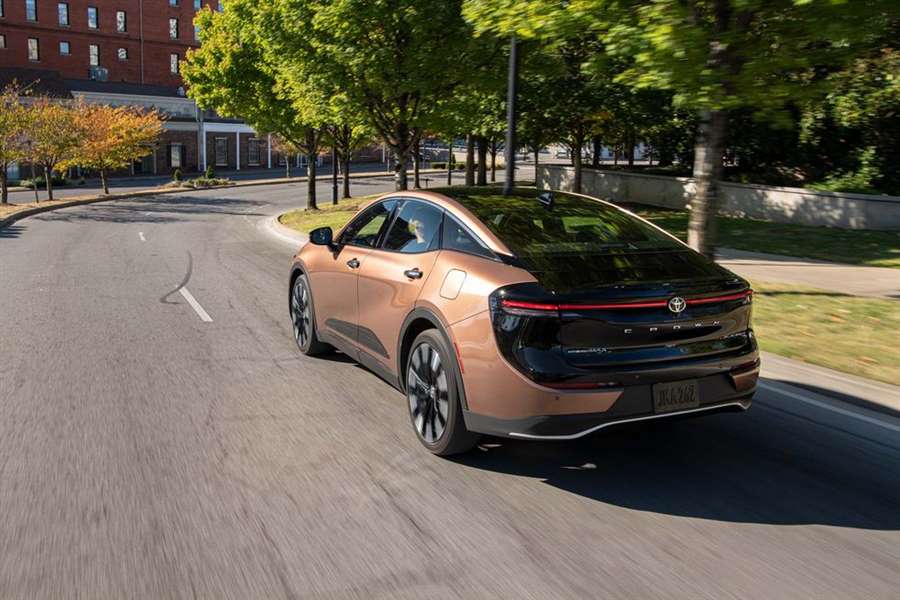 The Crown's two available hybrid powertrains differ in more than just power output. It's really like there are two Crowns—the base XLE and Limited for people who might actually be replacing an Avalon, as well as the Platinum Hybrid Max models that step brazenly into Lexus territory in terms of pricing and performance. All-wheel drive is standard either way, with the XLE and Limited using a naturally aspirated 2.5-liter four-cylinder paired with three electric motors to deliver a total of 236 horsepower through a continuously variable transmission. The rear axle is electric-only—there's no driveshaft—and its motor makes 54 horsepower and 89 pound-feet of torque. That's enough, Toyota tells us, to ensure that all-wheel drive remains available at all speeds, although we can't imagine the rear end is doing much if you boot it at 80 mph. This powertrain isn't the enthusiast choice, with Toyota claiming a safe and sane 7.6-second 60-mph time, but it does have an impressive EPA combined fuel-economy rating of 41 mpg. Curiously, while the revised 2023 Corolla Hybrid gets a lithium-ion high-voltage battery, the upmarket Crown sticks with nickel-metal hydride. 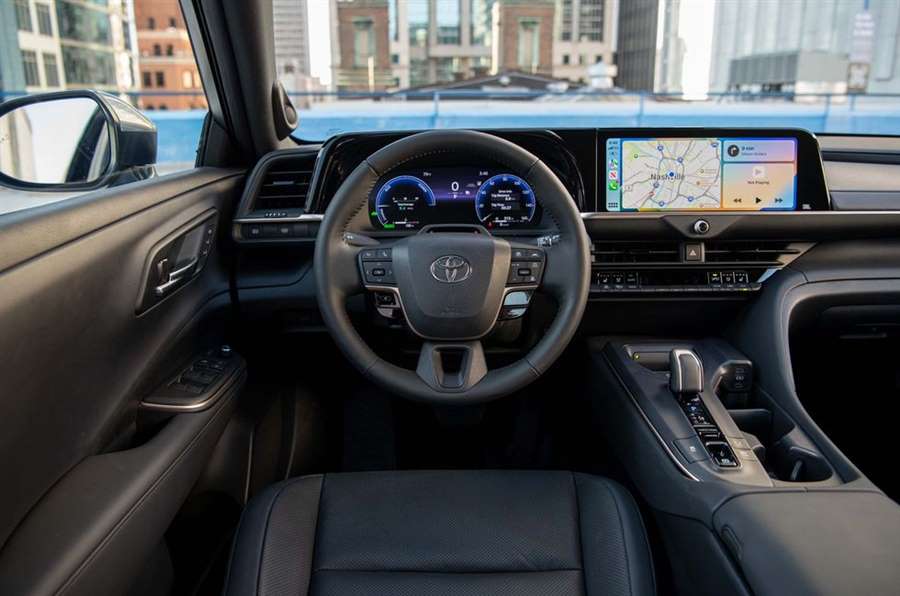 The optional Hybrid Max powertrain, available only in the Platinum, more closely aligns the Crown's performance with its bold sheetmetal. A turbocharged 2.4-liter four teams up with two electric motors to deliver 340 horsepower and 400 pound-feet of torque, while EPA combined fuel economy drops to 30 mpg. In the Max, the water-cooled rear motor makes 79 horsepower and 124 pound-feet and is always engaged (the base powertrain goes front-drive until the rear wheels need traction). Stacking the gains, Toyota bolts the turbo four to a six-speed automatic that uses a wet clutch instead of a torque converter. Hello, silky rev-matched downshifts. Intriguingly, the clutch will allow a high-rpm launch-control mode, which Toyota says is in the works and would likely drop the claimed 5.7-second 60-mph sprint even lower. The Platinum trim also gets adaptive dampers that make the Crown a surprisingly willing partner when the road gets twisty.

Inside, the Crown's cabin is reminiscent of the dearly departed Land Cruiser—not flashy but impeccably assembled with quality materials. It looks as if a scuffed driver's seat bolster might be the only tell when the odometer hits 200,000 miles. The Platinum's leather front seats are heated and ventilated, and the rear seats are also heated. The sleek climate control panel, immediately below the 12.3-inch touchscreen, would look perfectly at home in a $100,000 Lexus. The only letdown is the 11-speaker JBL audio system in the Limited and Premium (XLEs get a basic six-speaker system). The JBL sounds as if 10 of its 11 speakers might be tweeters, and yes, we checked the settings and tried different cars. Toyota says the system was "acoustically tuned for Toyota Crown to match unique vehicle characteristics," so maybe that means it expects the Crown demographic to listen to crime podcasts and NPR. 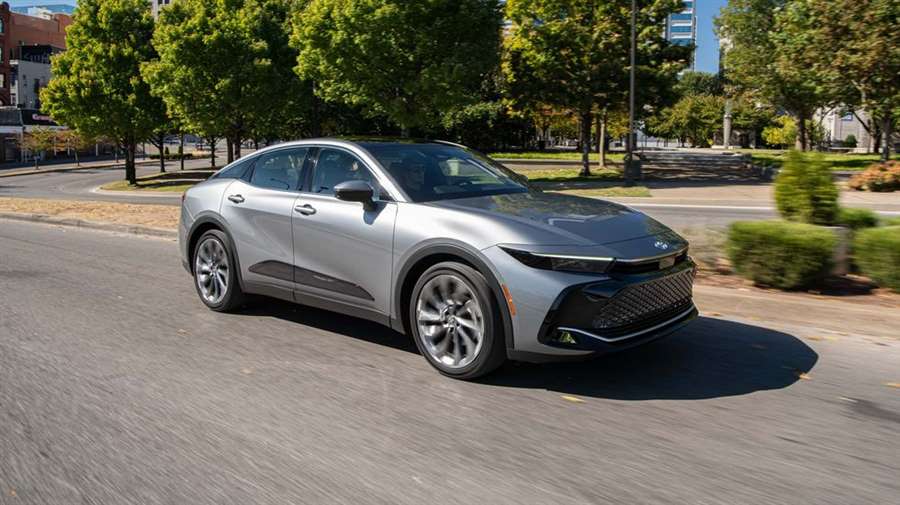 Like the old U.S.-market Land Cruiser, the Crown is built solely in Japan, at the Tsutsumi plant. And perhaps Toyota hopes that the Crown might capture a few orphan Land Cruiser owners in search of that signature anti-brand-snob Toyota luxury experience. Crown pricing starts at $41,045 for an XLE and ranges up to $53,445 for a Platinum. Is that too expensive for a Toyota sedan?

We'd say not, but the Crown's value proposition is up for debate as much as its style. Toyota hopes to sell about 20,000 Crowns a year in the U.S., which is a healthy goal but not one that demands mainstream conformity. Maybe you hate the way the Crown looks—that's fine. Toyota is fully aware haters gonna hate, and it truly doesn't care. If we're bickering over the Crown, we're talking about the Crown.

To that point, you don't offer two-tone paint if you're looking for unanimous consensus. That option, only available on the Platinum, brings a gloss black hood, roof, and rear decklid, set against extroverted lower-body colors like "Bronze Age." The two-tone paint costs $550 extra, and we'd say it's mandatory. But we'd be happy to argue about it.

Tagged under
More in this category: « 2023 Toyota Sequoia Capstone First Test: Outstanding Numbers, But the Rest?