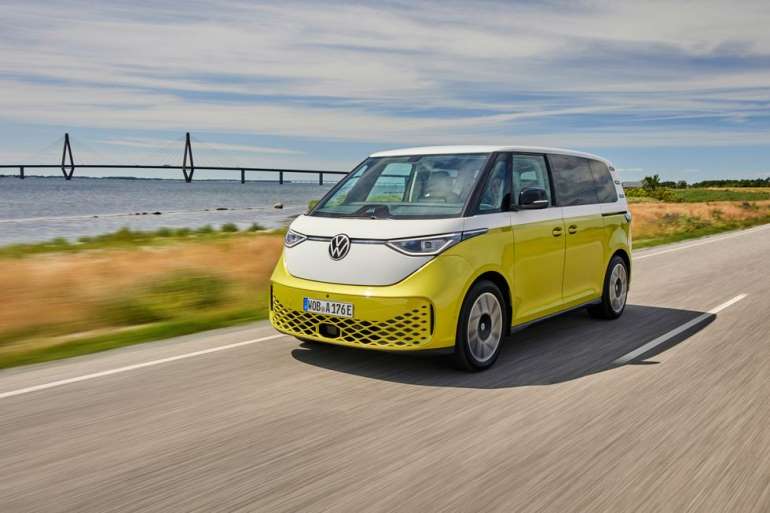 Superficially, the Volkswagen ID.Buzz fits into the current roster of U.S.-market minivans. It will, after all, have power sliding doors, three rows of seats, and plenty of cupholders. But this isn't really a direct salvo at the likes of the Toyota Sienna and the Chrysler Pacifica. For one thing, it's electric. And it's rear-wheel drive. And it looks cool. As in, people in Copenhagen were breaking their necks to stare at it during our drive of a Europe-spec Buzz. It's a learned reflex to think of minivans as anti-stylish, but this one is unabashedly fresh, a concept car made real in two-tone candy white and lime yellow. Climbing into the ID.Buzz makes you want to quit your job and become a surf instructor in Hermosa Beach, or go backpacking across Peru, or raise alpacas so you can knit organic-wool drug rugs for everyone in your commune. This is new territory: minivan as status symbol and halo car for an entire brand.

Given Volkswagen's success in squeezing Beetle nostalgia for a couple of extra decades' worth of sales, it's amazing it took this long to apply the same formula to the Bug's incense-scented cousin, the Bus (or, as VW affectionately calls it in Germany, the Bulli). But resurrecting the Bus with anything like the original snub-nosed proportions was never really feasible with VW's internal-combustion platforms—much easier to rebadge a Dodge Grand Caravan as a Routan than to engineer some sort of front-drive cab-over-engine people hauler. But on VW's MEB platform for EVs, the ID.Buzz can faithfully hew to the template of its beloved, painfully slow progenitor: rear motor, rear-wheel-drive. The vents in the D-pillar may be fake, but at least they correspond to the actual location of the motor. 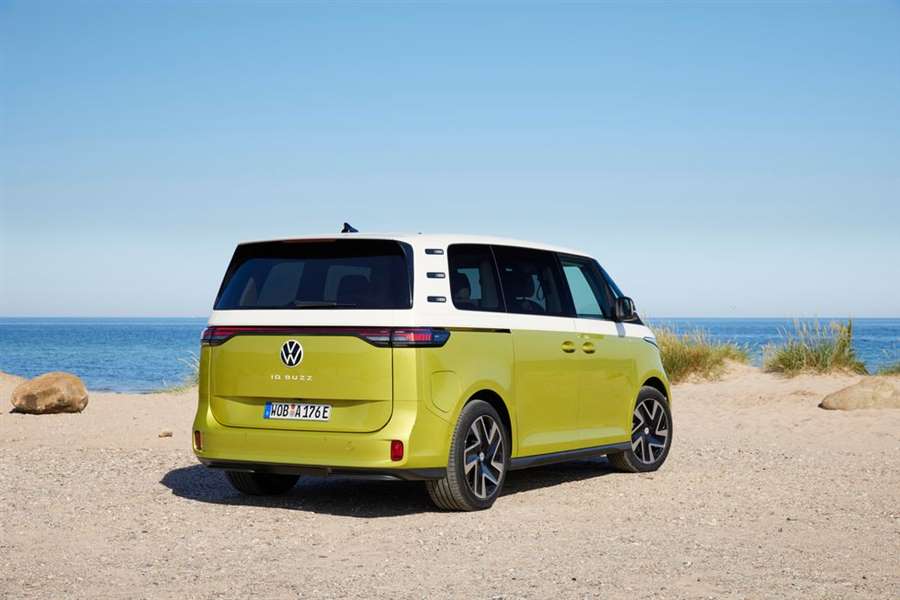 Mechanically, the ID.Buzz is a doppelgänger for the ID.4 SUV, with a single motor making 201 horsepower and 229 pound-feet of torque, and a 77.0-kWh battery delivering 263 miles of range, according to the WLTP methodology, which would put it around 220 miles in the U.S. on the EPA's cycles. (For reference, the EPA rates the rear-drive ID.4 Pro's range at 275 miles.) VW claims the Buzz will mosey to 100 km/h (62 mph) in 10.2 seconds, which makes it the 1967 Bus of contemporary electric cars. An all-wheel-drive U.S. version ought to be considerably quicker, given that we clocked the 295-hp all-wheel-drive ID.4 at 5.4 seconds to 60 mph. VW claims that the two-row ID.Buzz weighs 5448 pounds, while we recorded 4698 pounds from a comparable ID.4.

There aren't too many surprises on the spec sheet, except the rear brakes, which are drums. We suppose Volkswagen figured that since the motor can generate around 0.3 g of deceleration purely through regeneration, the rear axle doesn't exactly need six-piston Brembos. That's probably right, particularly because the launch model's wheel design mostly obscures the brakes anyway. But throw some skinny five-spokes on this thing and the rear end will look goofy, even if the brakes work perfectly fine—the ID.4 recorded a decent 166-foot stop from 70 mph, drums and all. 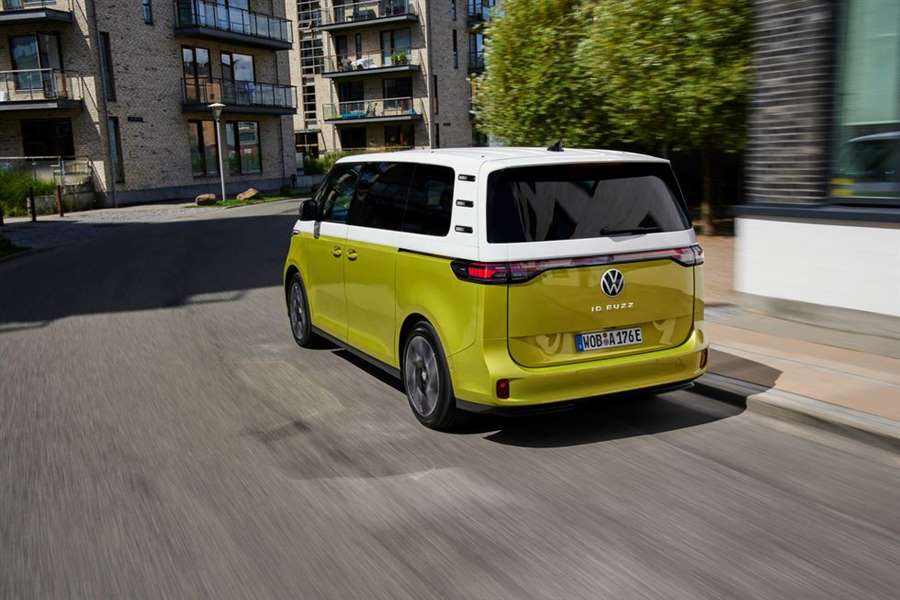 In keeping with the flower-child image of its long-ago predecessors, the ID.Buzz is delivered carbon-neutral (meaning VW pays for offsets corresponding to the carbon footprint of its production), and some of the interior materials are recycled. Between the front seats is the Buzz Box center console, which features an ice scraper and a bottle opener up top and is removable, in case you're the kind of person who likes to tote around your center console like a handbag. The infotainment controls are contemporary VW items, meaning lots of capacitive touch sliders and not many buttons. An automated parking system can remember how to park in certain spots, and you can either manually activate it (after teaching it the moves) or have it automatically offer its assistance when the GPS says it's in position. A cool LED light bar across the bottom of the windshield will flash red if you need to hit the brakes or signal upcoming turns from the navigation system.

It's hard to draw too many conclusions about what we'll see stateside, since the ID.Buzz we drove in Copenhagen is so different from the U.S.-market version. This was the short-wheelbase two-row model that we'll never see, outfitted with features we'll never get, such as the power-deployable tow hitch that swings out from under the rear bumper. Our version will be 10.6 inches longer, with three rows of seats and presumably more of a focus on passengers. The Europe model comes across as a cargo van with rudimentary rear seating (think Mercedes-Benz Metris), and in fact there's a cargo version rated for 1429 pounds of payload. We imagine that besides the stretch, the Buzz will undergo some people-moving optimization before its U.S. debut, which won't be until 2024. 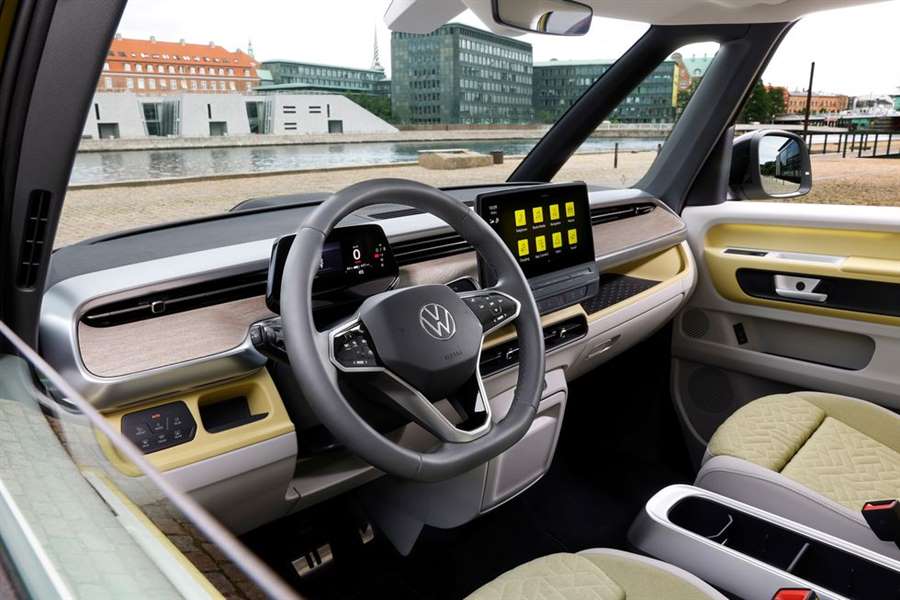 In the Europe-spec ID.Buzz, the second row is a bench seat with no armrests. There are no rear HVAC controls, because there's no rear HVAC to control. The rear seats fold but aren't removable, so the vans at the launch were fitted with an optional raised platform for the cargo area that creates a flat load floor but also renders a sizable amount of interior volume useless, since you can't access more than a couple of feet under that false floor without a croupier's stick. (VW evidently didn't entertain another path to a flat floor while retaining maximum cargo space: removable second-row seats.)

We can assume Volkswagen will fix up the rear-seat accommodations with captain's chairs and HVAC, but certain other compromises seem baked into the design. For instance, we initially assumed that the Buzz uses the ID.4's goofy driver's-side power window switches, in which two physical switches toggle functions to operate either front or rear windows. But it turns out the ID.Buzz only has two switches because only two windows open (the front ones). That flush glass in the rear doors looks excellent and contributes to the slippery-for-a-van 0.29 coefficient of drag, but it can't roll down. Will VW redesign the rear doors with inset roll-down windows or send us a van with rear windows that simply don't open? Maybe they can pop out and slide back while retaining the flush design, but some reengineering would have to happen. 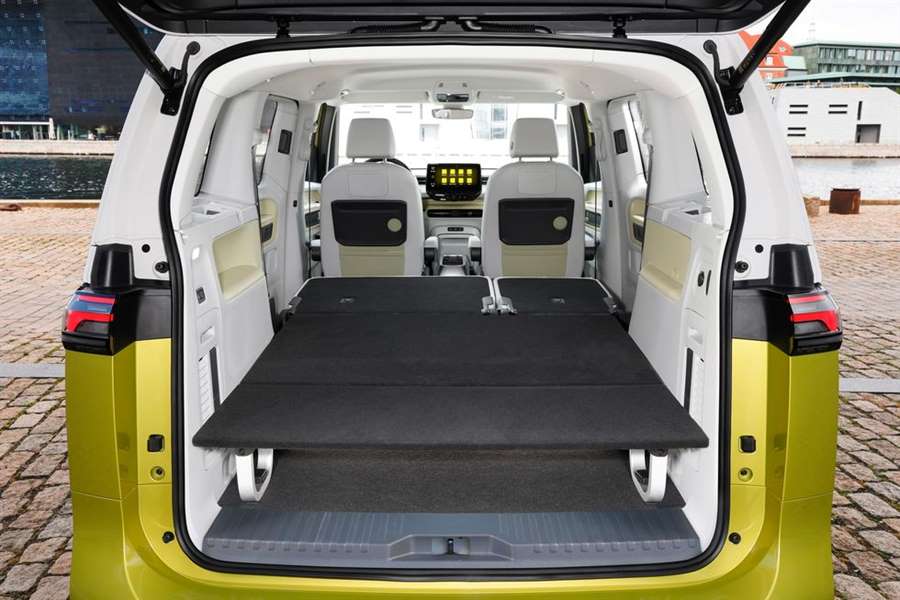 It's also hard to see how the ID.Buzz will accommodate a third row that folds into the floor, another minivan given in our market. With its rear-mounted motor and barely any overhang behind those big wheels (21 inches on the car we drove), where would the third row go? You have to admire Volkswagen's commitment to the concept-car aesthetic, but the lack of compromise on the ID.Buzz's looks imposes necessary drawbacks as function follows form.

That includes the view forward too. With its huge front quarter-windows, the ID.Buzz offers a panoramic view ahead. But the high seating position and upright windshield turn its roof into a giant baseball hat pulled low over your eyes. In Denmark, where traffic lights are often mounted on six-foot posts, it was a while before we encountered a hanging overhead light and noticed we couldn't see it without craning forward in the seat and looking up. If you flipped down the sun visor, you wouldn't be able to see U.S. traffic lights that are closer than the next county.

Will any of this hamstring ID.Buzz sales? Likely not, and VW is arguably making a canny bet that our market wants not another minivan benchmarked to the strengths of the existing crop but a machine that goes in a completely different direction. If you think of the ID.Buzz as more like an SUV than a minivan—a lifestyle statement rather than a ruthlessly optimized tool for family transportation—then it comes into focus. We've already got four minivans devoted to utmost practicality. It's okay to have one that's just living the dream.