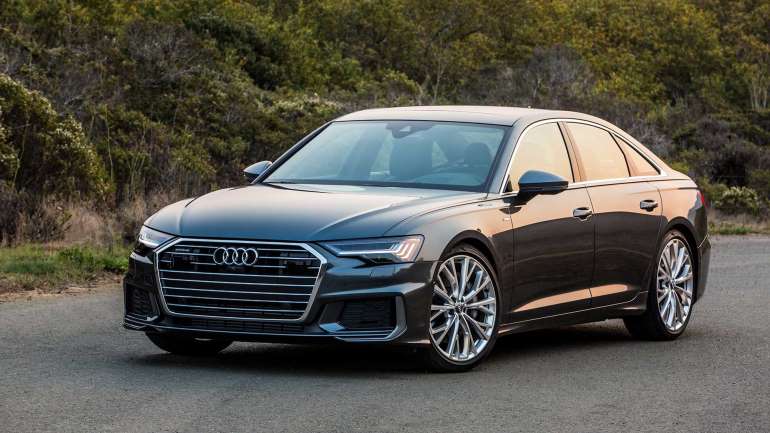 Clean styling, a beautiful interior, and smart tech abound in the new A6.

Competition among luxury car makers has ratcheted up to a fever pitch over the past several years. But while the primary battlegrounds in this particular war are among crossovers and SUVs, the fight for supremacy in the luxury sedan segment remains fierce with the usual combatants from Germany mingling with an upstart brand from South Korea and still pesky rivals from Sweden and the United Kingdom.

Among these vehicles sits the new 2019 Audi A6. Fresh off a comprehensive redesign that sees it successfully marry traditional luxury car qualities with the sort of smart, understandable tech implementation that's set the company apart over the past several years. You have a huge amount of choice when shopping for a vehicle in this class, but it's hard to ignore a vehicle that ticks as many boxes as the A6.

Audi styled the A6 in the same language as the bigger A8, but it's like the smaller car is speaking a different dialect of said language, at least in terms of exterior design. The A6 gets more assertive, less conservative lines throughout, more emotive headlights and taillights, and a generally more stylish character. A big part of that added character comes from the car’s massive grille and flat-ish hood – this is a clean attractive piece of design.

Out back, a strip of chrome that runs between the taillights gives a sense of width, although the fake exhaust outlets that sit in the lower bumper aren’t exactly stylish. Please delete these silly things, Audi. No one is going to lose their hair over the absence of visible exhausts, but they'll probably be confused as hell about fake ones.

Where the A6's exterior has dialectical differences with its big sibling, the cabins of the two cars are pretty much identical. Three displays dominate the interior, with a 12.3-inch digital instrument cluster running Audi's Virtual Cockpit, and a pair of touchscreen displays – 10.1 inches up top and 8.6 inches on the bottom – resting on the center stack.

It's a thoroughly modern look that, along with the real metal accents, contrasts classically with the warmth of the matte wood trim and soft leather upholstery. We really like the strip of metal that runs across the dash, bisecting the climate-control vents and making the cabin feel even more spacious than it already is. There are less successful touches here, though, particularly with the electric shift lever, which is cumbersome and unlikable when changing gears. But that's a minor flaw in an otherwise handsome place.

The A6 matches up neatly against its rivals in the comfort department, offering comfortable, supportive front seats, ample legroom on the pleasant rear bench, a quiet, smooth ride, and plenty of space for stuff. That's enough for a near perfect score.

Up front, the Valcona leather-upholstered seats are easy to spend hours in, with our tester’s offering heating and ventilation. The range of adjustment is impressive, while fans of sitting on the floor – your author is raising his hand – will love the A6's seating position. Visibility from the driver's seat is excellent fore, aft, and laterally.

Climb in back, and the bench is a fine place to hang out. Headroom is ample, although we aren't so sure about stuffing people in three abreast (in fairness, that's true of the competition, too). The A6 offers more legroom – 37.4 inches – than any of its competitors aside from the odd-duck Infiniti Q70L, a vehicle that essentially dates back to 2011. This Audi does a fine impression of an executive sedan, even with the front seats setup for your six-foot, one-inch author.

Ride quality is adequate, although our tester's optional 21-inch wheels and 35-series tires wouldn't be our first choice. They look good and contribute to the A6's sharp handling (more on that in a bit), but the A6's available 19- and 20-inch wheels would unquestionably provide a smoother ride.

As part of its redesign, the A6 (and its sexier sibling, the A7) adopted the screen-intensive layout of the A8 and Q8. That means a digital instrument cluster running Audi's excellent Virtual Cockpit software. The 12.3-inch display essentially relegates the primary 10.1-inch display atop the center stack to backup status with its reconfigurability and the dearth of information it offers. Aside from the climate controls, you can easily operate the A6's primary systems via the instrument cluster and the controls on the steering wheel.

The lower 8.6-inch touchscreen is home to the climate controls and also doubles as a screen for native handwriting inputs. Interacting with the lower screen is a pleasure, particularly compared to other twin-screen setups like those found on Jaguar Land Rover's newest products.

The screens respond quickly to inputs and with a reassuring pulse from a haptic feedback motor. The native handwriting software is an enjoyable and intuitive way of searching for destinations in the nav system, too. Just swipe and flick each letter or number and the main display actively responds as the driver adds additional characters. It's one of the rare cases where touch controls feel not just equal to a physical knob, but vastly superior.

The only point the A6 fails to earn is for its audio system. The 15-speaker Bang and Olufsen audio system packs 705 watts of power, but it simply doesn't have the presence of the competitive Burmester sets found in the Mercedes-Benz E-Class or BMW 5-Series. The pop-up tweeters are a neat touch, but the plastic speaker grilles lack the overall panache of the metal grilles of the Audi’s German rivals.

Audi offers the A6 with either a turbocharged 2.0-liter four-cylinder or a turbocharged 3.0-liter V6. The four-pot packs 248 horsepower and 273 pound-feet of torque, while the V6 is good for 335 hp and 369 lb-ft – go for the former if you just want a comfortable, relaxed ride. The latter, meanwhile, is a delight, with ample low- and mid-range torque. It feels like the engine this car was meant to have.

Paired with an eight-speed automatic transmission, the 3.0-liter V6 neatly bridges the gap between the base model and the 444-hp S6. Acceleration is smooth in most circumstances, although kicking the car into Dynamic mode brings about more aggressive transmission behavior and a sharper throttle response.

Our only real complaint with Audi's engine is that it doesn't sound very nice relative to the sonorous and smooth-sounding straight-six from BMW or as serious as the Jag's V6. That's a minor quibble, though. This is a very likable powertrain.

Every A6 features a multi-link suspension while an optional sport suspension reduces the ride height by three-quarters of an inch. The Prestige trim offers adaptive dampers (the former is a $1,050 option and comes with 20-inch wheels, while the latter carries a $2,500 premium and includes four-wheel steering). The impressively composed ride while cruising firms up neatly in Dynamic mode. This is an agile, fun-to-drive sedan that limits body roll without feeling uncomfortable. Feedback through the nicely weighted steering is suitable for the A6's purpose as a sporty luxury sedan, although the chassis is more isolated than the equivalent 5 Series or E-Class.

These advanced headlights shine brighter without blinding oncoming traffic, although that particular bit of tech isn't active in the U.S. Still, the technology is there once the federal government approves the tech.

With the 3.0-liter V6, the A6 returns 22 miles per gallon city, 29 highway, and 25 combined, although premium fuel is a requirement. That's true of most of the A6's rivals, though, as well.

The 2019 BMW 540i xDrive nets 21 city, 29 highway, and 24 combined, while the Mercedes-Benz E450 4Matic and Jaguar XF S are down a bit more, with 20 mpg city, 28 highway, and 23 combined from their respective V6 engines. But while each of these cars requires premium fuel, they return better fuel economy than the V6-powered Genesis G80, which runs on 87 octane but will only net 18 city, 24 highway, and 20 combined.