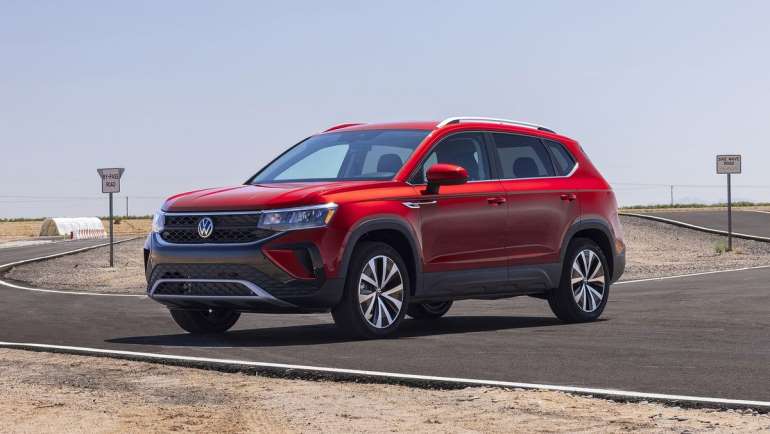 Subcompact SUVs feed a hunger for space, affordability, and a certain sense of belonging—since almost everyone drives an SUV these days. Among 20 other competitors, the Volkswagen Taos quenches an additional, more recent consumer craving for parsimonious fuel economy. Available in front- or all-wheel drive, every Taos hums along getting exemplary real-world fuel mileage thanks to a stingy, 158-hp 1.5-liter turbocharged four-cylinder engine. The Taos doesn’t offer a hitch to tow with, so we’d suggest moving up to the larger Tiguan SUV for that, but there’s plenty of cargo space inside, even with the rear seats in use, to easily handle grocery duty. It’s a close fight among the best in this class, so the Tiguan’s low starting price and capacious cockpit make it a tempting choice among others such as the Kia Seltos and Chevrolet Trailblazer. Beating its EPA-estimate by 4 mpg, an all-wheel-drive Taos SEL we tested managed an awesome 40 mpg during our 200-mile, 75-mph highway fuel-economy test loop. Copious amounts of interior plastic help keep the Taos’ price down while making the more richly-appointed Mazda CX-30 cabin feel like a miniature luxury condo in comparison with the VW. 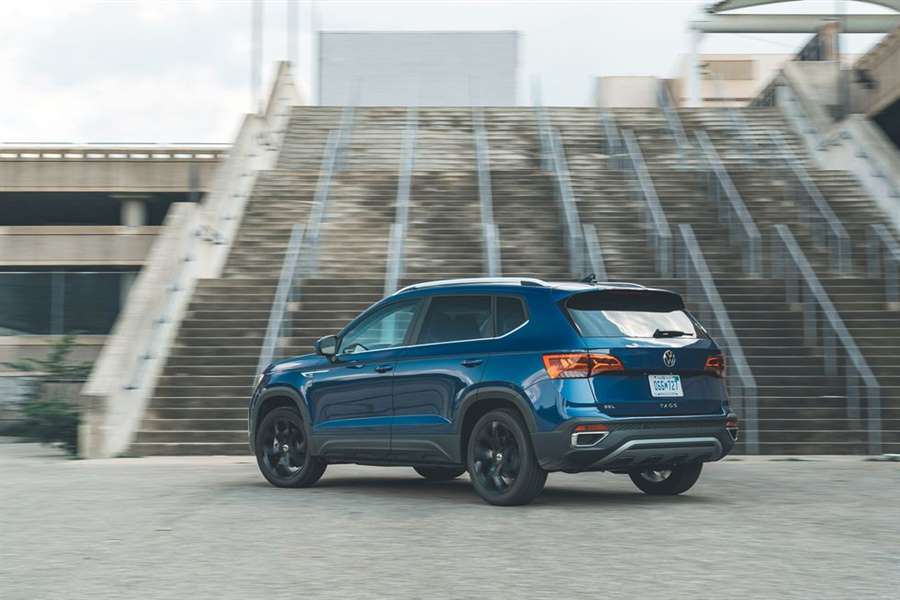 VW’s smallest crossover doesn’t undergo much change for 2023, but it does receive a few equipment enhancements. Volkswagen adds driver assistance features such as forward collision warning with automatic emergency braking and pedestrian monitoring, blind spot monitor, and rear traffic alert as standard equipment across all trims. The base S gets 18-inch wheels, instead of 17-inchers, on all-wheel-drive models. Lastly, the SEL now get a fancy panoramic sunroof as standard equipment. 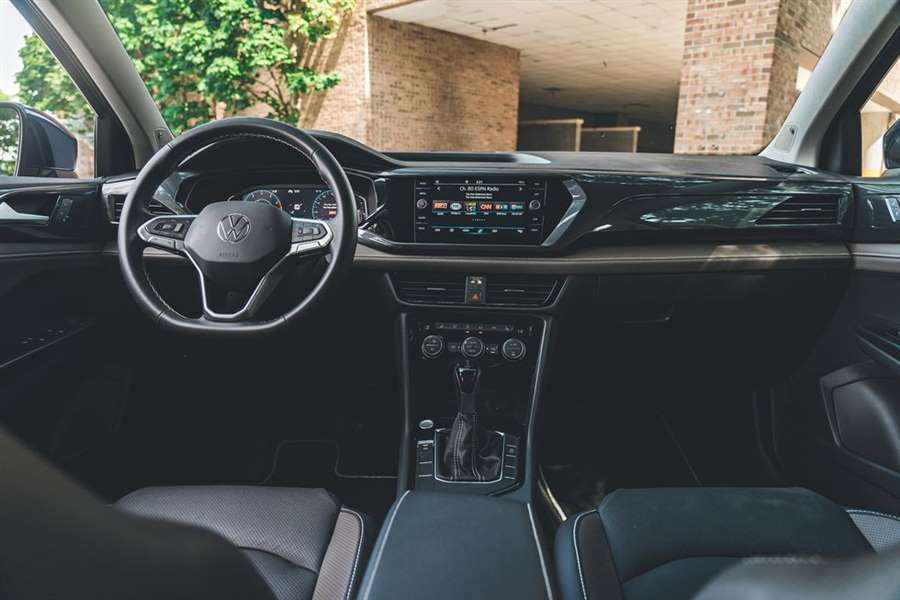 The Taos is powered by VW's new turbocharged 1.5-liter four-cylinder engine. It makes 158 horsepower and 184 pound-feet of torque. Front-drive versions feature an eight-speed automatic transmission, and all-wheel-drive models have a seven-speed dual-clutch automatic. The front-drive and all-wheel-drive Taos also have different rear suspensions, with the former using a torsion-beam setup and the latter using a more sophisticated multilink design. A set of 17-inch wheels are standard, but 18- and 19-inchers are also available. We appreciated the engine's low-speed thrust, the eight-speed automatic's unobtrusive operation, and the suspension's composure on even roads during our time with one.

The front-drive Taos is rated at 28 mpg in the city and 36 mpg on the highway, and the all-wheel-drive model is rated at 25 mpg city and 32 highway. We tested a front-drive Taos on our 75-mph highway fuel-economy route, and it earned an impressive 40 mpg, beating its EPA estimate. For more information about the Taos's fuel economy, visit the EPA's website. 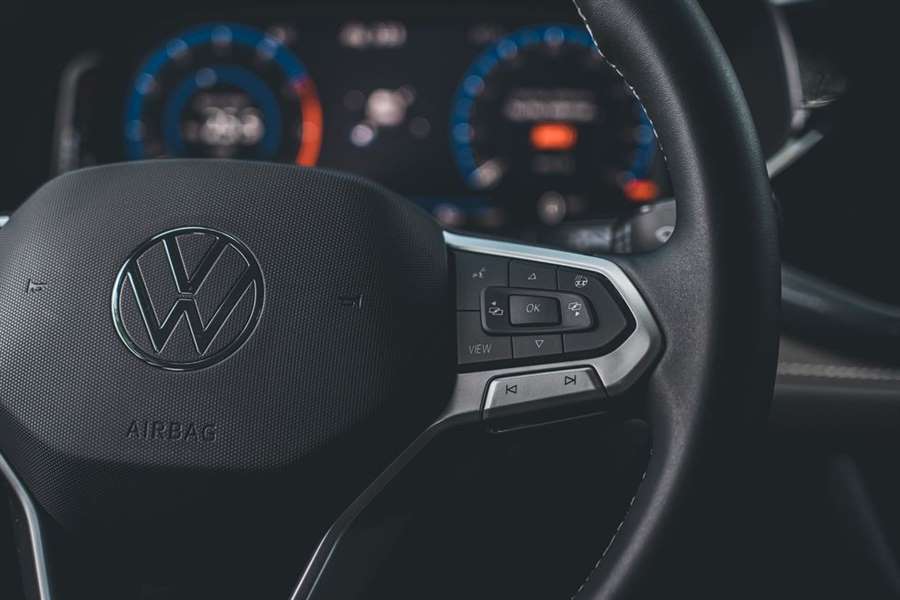 Inside, there's nothing overtly special about the Taos. The design and materials mimic the modern aesthetic found on other VW models. A fully digital gauge cluster is fitted to every dashboard and the standard two-tone seats are covered in cloth. However, leatherette and leather upholstery are both available, too. There's no shortage of popular options, either. The Taos cabin can be equipped with customizable ambient lighting, an eight-way power driver's seat, dual-zone climate control, a heated steering wheel, heated and ventilated front seats, and a panoramic sunroof. The Taos boasts 37.9 inches of rear-seat legroom, which is only 0.8 inch less than the two-row Tiguan. The Taos also has 28 cubic feet of cargo space behind the rear seatbacks and 66 cubes with them folded flat.

Every Taos features a slick-looking infotainment system with a subscription-based Wi-Fi hotspot. A 6.5-inch touchscreen is standard, and an 8.0-inch version is optional. The system can also be equipped with built-in navigation, an eight-speaker BeatsAudio stereo, SiriusXM satellite radio, and wireless smartphone charging.

The smallest VW crossover is available with a variety of driver-assistance technology, too, including forward-collision warning and automated emergency braking. For more information about the Taos's crash-test results, visit the National Highway Traffic Safety Administration (NHTSA) and Insurance Institute for Highway Safety (IIHS) websites. Key safety features include:

Volkswagen provides an above-average limited warranty and below-average powertrain coverage. However, the company does include complimentary scheduled maintenance that aligns with Toyota.

Tagged under
More in this category: « 2023 VW ID.Buzz Goes Its Own Way