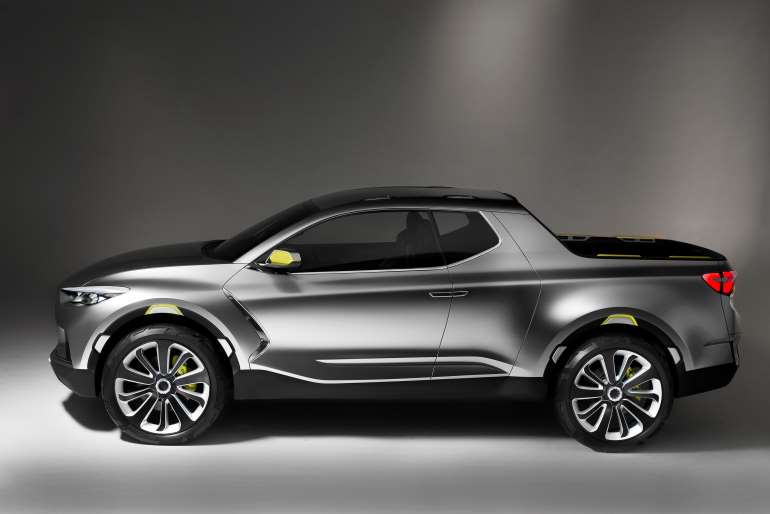 Hyundai is mid-size pickup truck segment in the United States. We will provide you some information according the rumors which we collect.

Though heavily camouflaged, we can see that the production Santa Cruz will closely resemble the concept. There will be differences of course, the main one being a more conventional four-door cab on the production model instead of the concept's cab which featured rear-opening suicide-style doors.

The prototype also reveals the Santa Cruz's grille design and independent rear suspension. Interesting notice the bed is very short. This comes as no surprise as Hyundai said at the reveal of the concept that the vehicle isn't an alternative to traditional pickup trucks.

Hyundai announce that wants to appeal to crossover buyers who want the extra utility of a bed without having to resort to an actual truck.

2024 Hyundai Santa Cruz should be assembled at the plant in Montgomery, Alabama. The main goal is that this car escape the punitive Chicken Tax on imported pickups trucks. The plant is where Hyundai also assembles the Santa Fe which is expected to share underpinnings with the Santa Cruz. The rival Honda Ridgeline also features car-like unibody construction, and Ford has also promised to launch a small, car-based pickup.

On US market will not be option for 2.0-liter diesel engine that was fitted to the concept. It's possible a diesel will still be offered outside the U.S. The same sales policy Hyundai does with the Santa Fe. The 2024 Santa Fe sold here is offered with a standard 185-horsepower 2.4-liter inline-4 and available 235-hp 2.0-liter turbocharged inline-4. Both are mated to an 8-speed automatic.