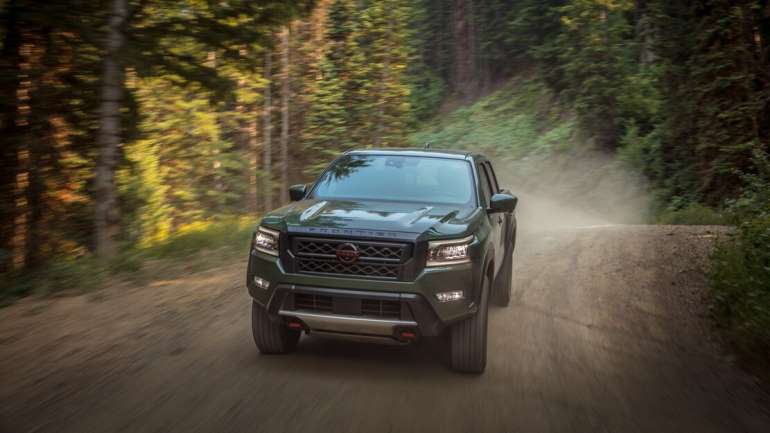 Nissan delivers a midsize pickup that can hold its own against any direct competitor.

It has been a long 17 years, but the much-awaited Nissan Frontier is finally on its way to dealerships, and just prior to their arrival, we were invited out to drive the newest midsize pickup. Continuing Nissan's 62 years of pickups in America, the 2022 Frontier puts a focus on being rugged, capable, utilitarian, and modern.

First off, let's level set what the Frontier PRO-4X is and what the Frontier is and is not. It is not a "Raptor fighter" or a Tacoma TRD Pro or Chevy Colorado ZR2 competitor. What it is, is Tacoma TRD Off-Road, Ford Ranger FX4, and Chevy Colorado Z71 competitor, leaving Nissan with plenty of headspace if it wants to enter the market with a Nismo package in the future.

The new Frontier uses a heavily modified version of the outgoing truck's F-Alpha architecture that it shares with the Titan. "Why not an entirely new one?" you might ask. Because the Frontier platform was already competitive to begin with, and instead of spending a billion dollars on a new platform, Nissan upgraded the chassis and spent its money in areas people would appreciate, such as design, interior, technology, and powertrain.

The existing platform already offered deep drawn framerails that are fully boxed (today's Tacoma, for example, uses a C-channel rear frame section that is riveted), a Dana 44-based rear axle with disc brakes and a locker (Tacoma still uses drums), and a relatively smooth underbody that has all the major components tucked up above the bottom of the framerails and out of harm's way. The suspension consists of front double wishbone IFS and rear leaf springs paired with a solid axle. Another benefit of sharing a platform with its bigger brother is that the Frontier can take advantage of some heavier-duty hardware to maintain its reputation as a tough, reliable little truck.

Some of the platform's new features include over 40 parts to improve NVH, including hydraulic cab mounts to further isolate the occupants from the rough-and-tumble world outside. The Frontier also switches to urethane jounces, adds a dynamic steering damper, and retuned rack-and-pinion with a steering gear ratio that has been increased by 16 percent.

By now the direct-injected 3.8L DOHC V-6/nine-speed combo should be familiar since it debuted in the previous truck for the '20 model year and stuck around in '21. It has a class-leading 310 horsepower, 281 lb-ft of torque, and it's more fuel efficient than the old four-cylinder. No manual transmission will be offered.

One area of the new truck that seems to resonate well with just about everyone we've talked to is the Frontier's exterior design. From the taller shoulders and chiseled body to the new face, the Frontier has a great stance and looks tough. The bedsides were brought up 1.4 inches, giving the new Frontier more bed volume and additional depth that is helpful for keeping the tops of coolers and fridges below the bed rail. Nine exterior colors will be offered.

Now sporting one of the best interiors in the class, the Frontier feels premium with a dash that is fit for a truck, and not something borrowed from an economy car. The big 9-inch display (standard on the PRO-4X) is borrowed straight from the Titan. With its high resolution and inky blacks, it's the centerpiece to the Frontier's new push to be a real contender in this class once again.

With a wrapped and stitched dash and door panels, Lava Red interior accents, and soft-touch panels, the Frontier feels more upscale than ever before. Front-seat passengers are treated to the supportive and comfortable Zero Gravity chairs, and thanks to a impressively quiet interior, they can rock out to the 10-speaker Fender Premium audio system that sounds more crisp and clear than anything else in the segment.

From a layout standpoint, most of the controls are right where you expect them to be, with only a few buried to the left of the wheel. The Frontier is easy to operate and has a fair amount of storage for its size, plus niceties, such as wireless phone charging and eight cupholders, four of which can hold 32-ounce bottles. Finding a good seating position is easy, but the addition of a telescoping steering wheel would make it that much better.

Nissan did a good job of making the Frontier interior as space-efficient as possible without growing the truck. Two full-size guys can sit in the front without touching shoulders, and the back seat remains big enough for all but the longest trips. The rear seat even has an armrest, and the 60/40 seat cushions fold up stadium style, or can fold down, depending on your cargo needs.

Nissan wants technology and safety to be accessible, so the Frontier is packed with standard and optional features including the first application of Nissan Intelligent Around View Monitor with Moving Object Detection, Nissan Safety Shield 360, a Wi-Fi hotspot, Apple CarPlay and Android Auto, multiple USB-A and USB-C charging ports, 120V outlet with 400-watt capability (one in the rear and one in the bed), Intelligent Cruise Control, Traffic Sign Recognition, Intelligent Driver Alertness, rear sonar and Rear Door Alert. The Frontier features eight standard airbags.

All the NVH improvements are apparent, and the solid thunk of the doors closing gives you an idea of what to expect from behind the wheel of the Frontier. Steering feel is exceptional, albeit with a little too much effort required for a truck that is likely to spend most of its life traversing the urban landscape and wheeling into tight parking spots. A little additional assist would be nice. Steering effort aside, we do need to point out just how directionally stable the Frontier is, easily holding a heading without much pilot input.

Throttle tip-in is good, although the nine-speed automatic could shift a little quicker and firmer (a fix Nissan engineers tell us is already being addressed). We do think the V-6/nine-speed is a good combo, well matched to the truck, and delivers solid acceleration. On the "whoa" side, the Frontier's brakes have great pedal feel and are easy to modulate.

The PRO-4X has a 6,270-pound max towing limit and standard trailer sway control. We tested the truck with a 5,800-pound boat with inertia brakes on the trailer, and the Frontier handled the load much better than its size would imply.

The Frontier feels stable, solid, and treats the driver to excellent outward visibility. This is a truck we wouldn't hesitate to take on a 1,000-mile road trip right now.

On the trail, the Frontier's perfect size allows it to get into tight spaces, and we like the tuning on the Bilsteins, although it could benefit from a hair more travel for those who like to push it. That being said, the Frontier is a fun, tossable little truck that has a traction control system that keeps the truck moving in 4-Hi, where the rear locker can't be actuated (it's still 4-Lo only).

Thanks to its low First gear of 5.425, the little Nissan has a solid crawl ratio of 54.42, and if that's not enough, the hill descent control system is very effective, without any of the loud solenoid firing of the competition.

Overlanders and car campers will agree that the Pro-4X's 1,230-pound payload capacity will allow a fair amount of gear and passengers to go along on the next adventure.

If there were any suggestions we'd make to Nissan, it would be to offer a more aggressive tire to give us more confidence in tougher terrain, because the chassis is good for it, especially with full underbody skidplating. We'd also ask that Nissan allow the off-road camera system to work at higher speeds. The threshold of 6 miles per hour is just too low to be useful in many situations.

We do love that the Frontier is still a driver's vehicle, with none of the preset drive modes offered in other trucks. It's still an honest little pickup that puts the driver in charge.

The new Frontier is the truck we'd hoped it would be and more. It raises the bar in design and amenities and is a good value with a lot of content for the price, along with the capability you've come to expect from Frontier. While it won't dominate the higher end of the off-road segment, it can challenge any direct competitor and hold its own. If our experience out on the road is any indication, the design alone will bring in more potential customers. For those looking for a bit more out of the Frontier, NISMO has a line of accessories available, including the Bilstein 6112/5160 performance shock package. We are hopeful this means Nissan has the appetite for an even higher-capability model to go toe to toe with the TRD Pros and ZR2s of the world in the near future.