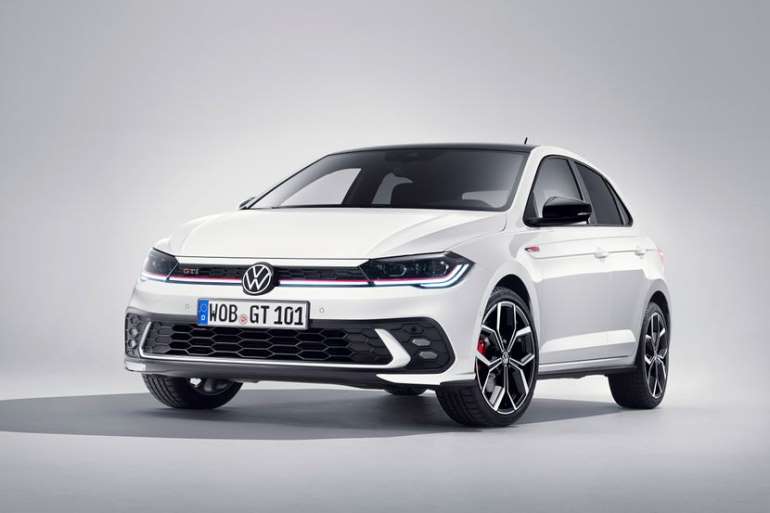 If you want a genuinely fast supermini without the compromises, the Volkswagen Polo GTI could well be for you. For while the Ford Fiesta ST and Hyundai i20 N are very exciting small cars to drive, their firm suspension and always-on attitude, can make them quite difficult to live with.

VW has been building go-faster versions of the Polo for decades, but they’ve always felt like the slightly poor relations in comparison to the seminal Golf GTI. However, when the current generation of Polo GTI first launched in 2018 we were left more impressed than we expected, thanks to a capable chassis and plenty of punch from the 200hp 2.0-litre turbo engine.

On sale from 2022 is a refreshed version of this hot hatchback, with mildly made-over looks and some small technical changes. Power output is now 207hp, accompanied by 320Nm of torque that arrives in a lump that’s available all the way from 1,500 to 4,500rpm, and driving the front wheels via a seven-speed DSG automatic transmission. The standard equipment list gains Volkswagen’s adaptive IQ.Light LED matrix headlights and an illuminated grille crossbar.

Above all, however, the Polo GTI remains comfortable as well as quick. Which really helps it stand out among its rivals.

There was a time when entering the cabin of a Volkswagen Polo was like dropping into a black hole, but this latest model has always bucked that trend with brightly coloured dashboard inserts. In the GTI’s case, you get Kings Red Glossy as standard – though if this is a bit much, Deep Iron Glossy is also an option.

The candy red finish is certainly eye-catching. But it also appears to be a slightly different shade to all the other red GTI detailing you’ll find inside and out. As if a couple of different departments weren’t talking to each other.

Still, at least the seats are smart, with their sporty bolsters and ‘Jacara check’ pattern, famous from other Volkswagen hot hatches. Plus, the build-quality feels very good throughout. The black headlining is another typically sporty touch, though some buyers may find it adds a claustrophobic air to the interior.

Worse, as with most modern VWs, the Polo GTI is plagued with touch-sensitive controls in place of conventional switches and buttons – including for fairly fundamental items such as the air-conditioning system. You get used to this approach, but it still seems like change for change’s sake and simply isn’t as straightforward to deal with when driving.

The infotainment system works well enough, however. The Polo GTI gets satellite-navigation as standard, alongside Android Auto and Apple CarPlay, DAB radio, and a host of other connectivity features; an 8.0-inch touchscreen is standard but you can pay extra for a 9.2-inch touchscreen that fills the space on the dashboard better and comes with a number of extra features.

The latest digital instrument cluster – Digital Cockpit Pro – has a higher resolution, greater contrast and deeper colours, making it nicer to use.

We’ll get to the suspension in the driving section below – here let’s quickly deal with the other comfort features. Standard sports seats not doing it for you? Then you can opt for ‘sports comfort’ seats instead, though these are finished in ArtVelours instead of the classic GTI tartan of the regular chairs.

There’s plenty of room for adults in the front. The rear is less generous, so while the five-door body makes access easy enough and the back doors open impressively wide, head and leg room is tight. This is a small car. Hard not to expect that.

Road noise is well suppressed, and there’s not much wind or engine noise, either – and although the Sport driving mode does make it sound a little louder, this is still far from intrusive.

Safety kit includes curtain airbags and a new centre airbag to stop passengers colliding during an impact, autonomous emergency braking, and road-sign recognition. The Polo GTI will also jam its brakes on after a crash in an effort to stop secondary collisions, and comes with Volkswagen’s Travel Assist function that delivers modest assisted driving capability, including lane keeping assist.

More traditional electronic driver aids include the usual ABS and ESC as well as Volkswagen’s long-standing XDS electronic differential lock (sometimes also referred to as the EDL), which helps to maximise traction during cornering.

There are three Isofix mounts for child seats: one on the front passenger seat and each of the outer rear seats. This Polo has a five-star Euro NCAP crash safety rating, but it dates back to 2017 – the test is now harder and the car has been facelifted, but we wouldn’t anticipate any major failings in this area.

The phrase that first springs to mind is ‘very grown up’. This is a compact car with a big engine, so it very rarely feels stressed. It also has a (generally) smooth and swift-shifting automatic transmission – which won’t allow you to hit the limiter, even in manual mode – and far better ride comfort than any of its rivals.

Thus the Polo GTI will almost certainly be a very easy car to live with. No wincing here if you need to take your grandmother to the shops, for instance – whereas in a Fiesta ST you could be genuinely worried they might rupture something, given the hard ride of that car and the state of some of our urban road surfaces. Despite being 15mm lower than a normal VW Polo, the GTI really can smooth out the worst of the rough stuff.

It’s quick, too. The quoted 6.5-second 0-62mph time may only match the aforementioned ST’s on paper, but in practice, the Polo’s seven-speed DSG transmission will make this much easiest to routinely achieve than the Fiesta’s occasionally clunky six-speed manual gearbox. Top speed is slightly higher at 149mph versus 144mph, but that’s probably less relevant than the substantial, easily accessed mid-range muscle the VW’s larger engine delivers.

The question is whether this rapid but relaxed progress is really what you want from a supermini-sized hooligan. There’s a clear argument to be made here that for all its polish, the Polo GTI isn’t quite exciting enough. Competent – yes, hugely. But much of the time this feels more like a small car that happens to be fast rather than eyes-wide thrill ride.

The steering, for example, while precise, doesn’t give you much in the way of feedback. This can in turn – no pun intended – lead to the front of the car feeling less incisive than the rival Fiesta’s. You can cure this to a certain extent by braking into the corner, rather than on the way to it, which helps the Polo get its nose rotated. But there is nothing like the agility that the ST exudes in every moment.

Similarly, while the body control is hardly poor, in the regular suspension setting it does start to become a little floaty over crests and bigger bumps as you go faster. UK GTIs come with adjustable damping as standard, and the firmer Sport setting does gather things back into hand. But the cost is a brittleness that’s fine on smooth racing circuits but less suited to British B-roads, meaning we found ourselves reverting to the normal mode and driving slightly slower.

The Polo GTI is available as a single variant, sitting at the top of the Volkswagen Polo range. Standard equipment includes not only the sat-nav, infotainment system and air-conditioning mentioned above, but also parking sensors, automatic lights and wipers, adaptive cruise control, and an auto-dimming rear-view mirror.

Personalisation options include a black roof finish in combination with the red, white and blue exterior paint colours. Black and grey paint choices are also offered, as is an upgrade from 17-inch to 18-inch alloy wheels (pictured here).

Visual changes for the 2022 Polo GTI facelift include a new rear bumper treatment – the previous version looked too much like the standard car from behind.

As well as a pair of USB-C ports in the front that link to the media system, there are also two more in the rear. The latter are for charging only, but this should keep your passengers happy.

The Volkswagen Polo GTI is fast, comfortable and mature. It seems well built and the sporty styling touches are restrained enough for the most part that you don’t feel like you’re making an exhibition of yourself while still attracting approving glances from people in the know.

We have no hesitation recommending it to anyone who wants a small car that’s effortlessly rapid and doesn’t demand you make excuses to your passengers whenever the road surface gets a little rougher. As a daily driver without major compromises, no other supermini-sized hot hatch comes close.

However, both the Ford Fiesta ST and the Hyundai i20 N are more fun for enthusiastic drivers. So consider your priorities carefully before heading to the VW dealer.

The Polo GTI is more rounded in character than any rival while giving away nothing when it comes to raw performance. The DSG transmission and adaptive suspension make it easy to live with, and it comes with plenty of standard kit.

Competitors are more composed at higher speeds as well as more agile and engaging to drive. Far too many touch-sensitive controls in place of proper buttons.